You are here: Home / Lifestyle / Matt at Home, Chapter 1

Hello everyone, it’s Matt blogging tonight.  Since Kath’s across with world with intermittent and unpredictable web access, I thought I’d try to keep the blog going with some ramblings from my day.  A lot of Kath’s readers have sent me emails asking about my eating habits and what it was like for a guy to lose weight, so I thought I’d finally give you a glimpse into what I do when left at home to my own devices!

After dropping Kath off at the airport, I came back home to try out my newest homebrew that had just finished carbonating. 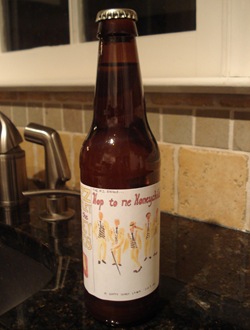 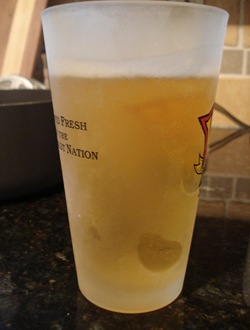 It’s a hoppy honey lager, and it’s definitely the lightest beer I’ve made yet.  It’s pretty mellow – would be good on a hot day after mowing the lawn.

Next I took a stock of the food in the house so I could figure out what to eat for the week.  Besides plenty of kashi crackers, oatmeal, and nut butters (where do these keep coming from!?), the selection was pretty good.  Whenever Kath’s away from the house, I always make it my goal to buy as little as possible and use up the pantry supplies.  Here are some highlights: 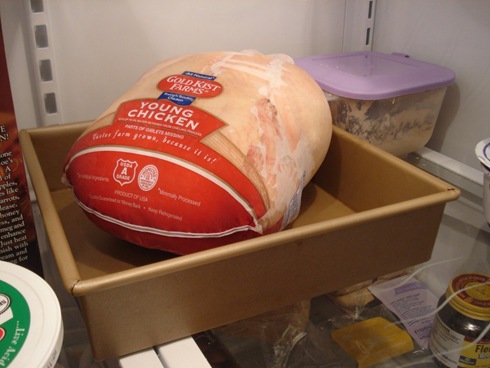 Frozen chicken went from the freezer to the fridge – in a few days I’ll butcher it into pieces and use some for a meal.  Hey, while I’m at it I just noticed there are a lot of yeasts in this picture – the yellow package is champagne yeast, the purple is german wheat yeast, the yellow jar is instant bread yeast, the mostly obscured packages in the very back bottom of the fridge are active dry, and the purple topped container is my sourdough culture! 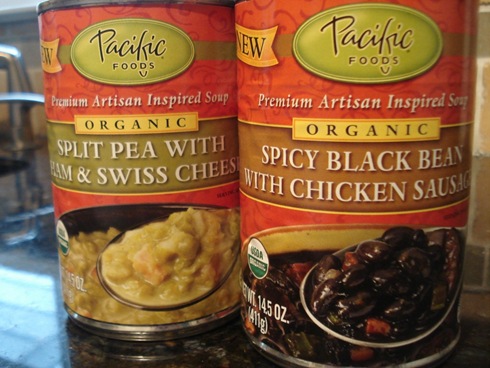 I was encouraged to eat some canned soups during the week – these’ll make a nice base for adding some other fun ingredients later. 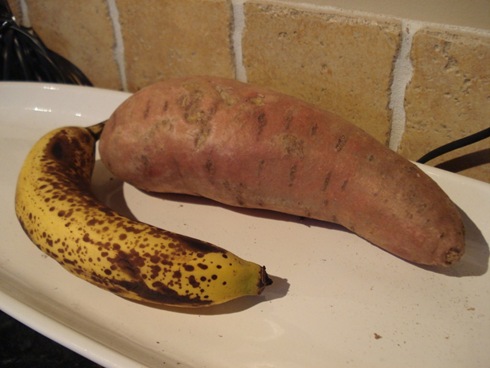 So I went to the grocery store to pick up some stuff.  Here’s my loot: 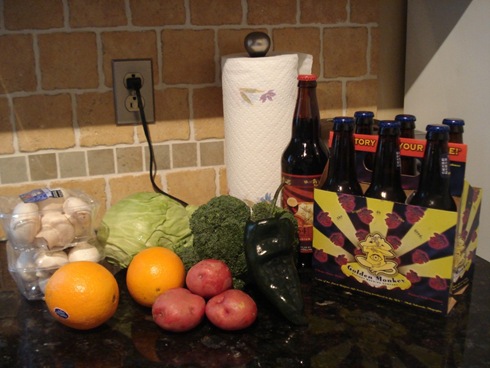 Lately I haven’t been in a meal-planning mood, so I just buy whatever is cheap and/or looks good and decide in the moment what I want for meals.  I think I can figure some creative things out with these fresh veggies, and all the dried beans, rice, and of course bread we have in this house…

Having gotten the horrible burden of grocery shopping out of the way, I decided to celebrate with a beer – New Belgium’s 1554.  You can find my review of it here! 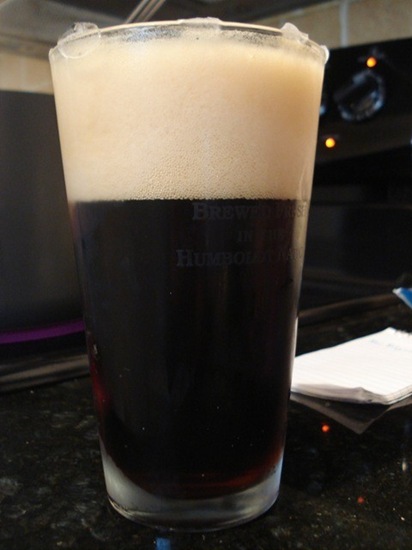 I had to make some corrections to a beer I brewed last weekend, so there was some mini-brewing going on in the kitchen: 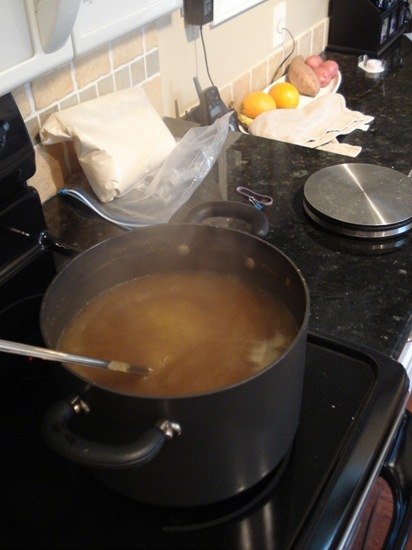 Later, my mom and I went to Cantina 1511 – a sorta upscale Mexican restaurant in the cool Dilworth area of Charlotte.  This place takes pride in attempting to replicate authentic Mexican food rather than the typical ‘ritos and tacos you can find everywhere.  Still, you gotta love the chips and salsa plopped in front of you, even when you’re just getting a quick drink at the bar while your table is being prepared! 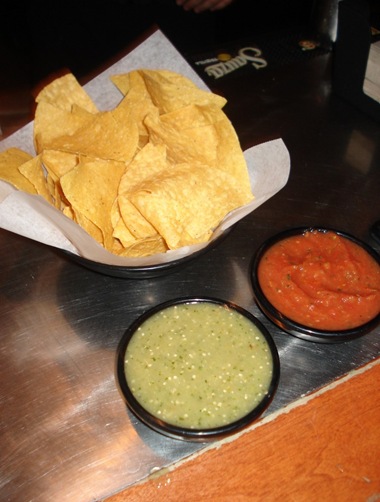 I started with a Sierra Nevada Pale Ale – as good as ever. 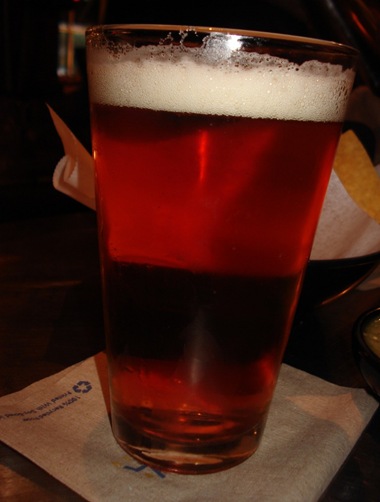 My mom got some $12 margarita that a friend recommended to her – it was tasty, but the only margaritas I really like are the ones my dad makes at the lakehouse.

I worked on an archeological site in Yucatan, Mexico one summer during college, and I always loved eating the food that the Mayan guys we worked with ate.  One of the classics was called pok chuc.  It was grilled pork that was shredded, and then served in a runny adobado sauce.  Like every Mexican meal, you threw in some tortillas, beans, rice, and whatever veggies you have around the house.  On Cantina’s menu they had a Barbacoa de Puerco which seemed to somewhat replicate pok chuc, and that’s what I got (sorry for the terrible photo quality): 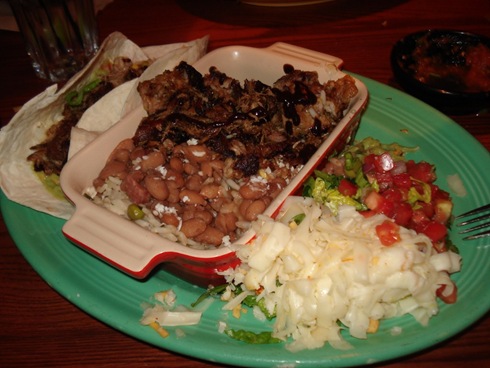 It was pretty amazing – the pork had a great charred flavor, and that big pile of white stuff in the foreground is CHEESE, not some disgusting lettuce.  Because I felt obligated, I got a Dos Equis lager. 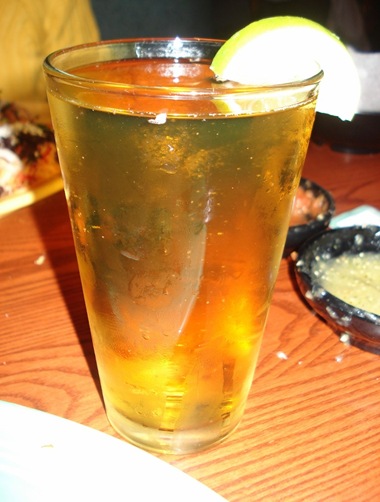 It’s not that I dislike Mexican beers – in fact, I find them really refreshing.  They’re almost like drinking a Coke with your meal.  But I never feel like I’m having a BEER when I drink them.  Gotta admit, they really are a great complement to spicy food.  It’s the same way with Japanese beers and wasabi.

Last I spoke to Kath, she was in Detroit about to board her insanely long flight to Amsterdam but seemed to be in high spirits.  I eagerly await her next update!