You are here: Home / Lifestyle / KERF Gets A Makeover

You’ve probably all noticed my sparkling new header up there —^ I owe my thanks to the brilliant ZestyCook! For years (I can say that now 🙂 ) I’ve been wanting to design my own header with my own oatmeal photo (yes, that’s one of my summertime bowls 😎 ), and Cory did a fantastic job (especially because I am super picky and had like 10 revisions 🙂 ) THANK YOU SO MUCH ZESTYCOOK!!! Not only do I love his lime green site, but he’s got a wealth of great recipes and information as well: Easy Quiche, Thai Pumpkin Soup and How to Take Amazing Food Pictures.
If any of you guys are interested in getting your own header designed, here’s how to contact him: Contact ZestyCook.

I also learned how to make some tweaks to KERF in the style sheet – basically just took away the ugly sandy blah background color. I think it looks much fresher

I was 15 minutes late for lab so I parked in a faculty spot = parking ticket in 2 hours. UGGGGGGGGG!!!! Oh well. Lab went well today and I was promptly out at 4pm. For some reason I kept putting off my snack and now I know why: this arrived at my doorstep at 5:00!! BARNEY BUTTER!!!! I had to taste it with a few Kashis right away (I was conservative and probably only had about a teaspoon) 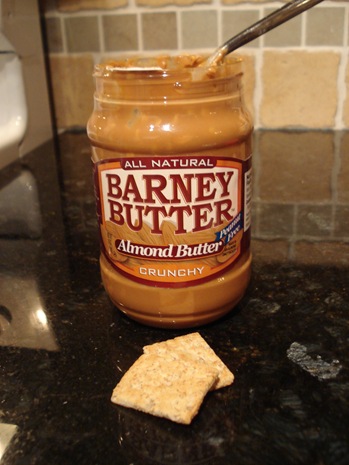 And here’s me sporting the totally awesome T-shirt that came with it! 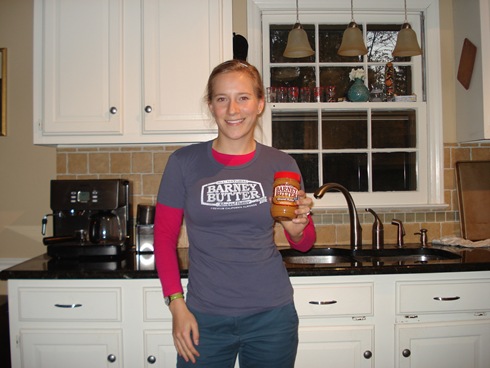 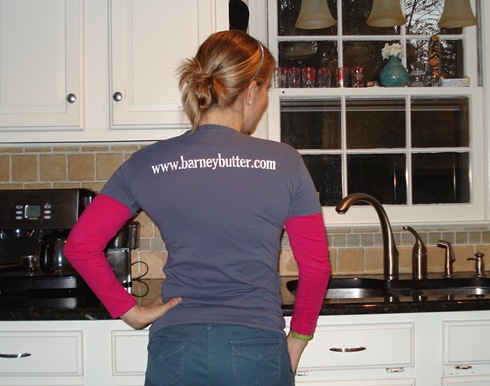 Barney Butter is quite delicious and everything I had hoped for – perfectly roasted and smooth and stick-to-your-mouth creamy. But I also love the TONS of chunks of almonds (I chose chunky to cream 🙂 ) Definitely the chunkiest nut butter I’ve come across. Mmmmm! BB is the only almond butter made in an almond-only facility which is a big deal for those with peanut allergies. Apparently many anaphylactic reactions occur due to cross contamination by as little as 1 milligram! Don’t forget you can get free shipping at BarneyButter.com on orders over $14 with the code: ship4free. Can’t WAIT to have it in oats tomorrow

this !
Those of you who won the BB Contest: email me your thoughts and I’ll post them – and better yet – photos of you enjoying it!

For my official snack I sliced up an apple and had another small piece of Gina’s whole wheat banana bread with the BB (about a tbsp). And tea to keep me warm! 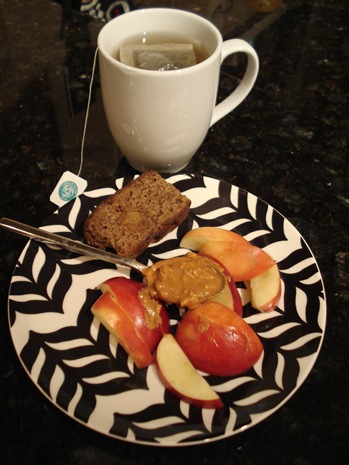 Dinner tonight was the one meal the husband planned for the week: an English feast!

Fish n Chips, Peas + English Beer (which he brought home from a busted pack today – good timing!). It wasn’t really healthy at all, but follows the ‘ol “just have a small portion” mentality. My original plan was to have a big salad to fill me up and have a few bites of all the components, but turns out I wasn’t really hungry for dinner after my late snack, so I just went with the main course. 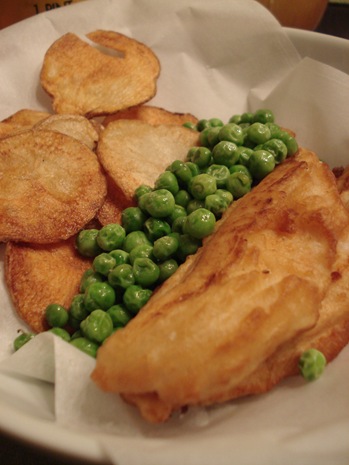 I only had about 2 oz of the beer (despite having studied abroad in England, I am NOT a fan of their beer – except New Castle) 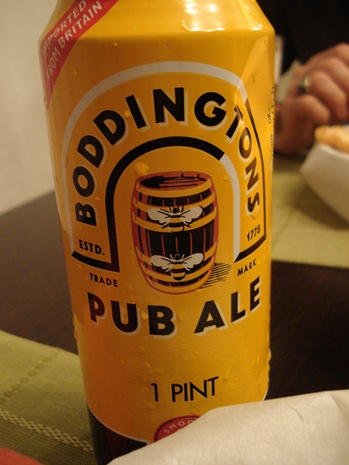 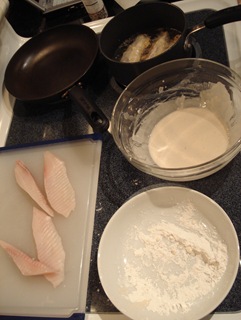 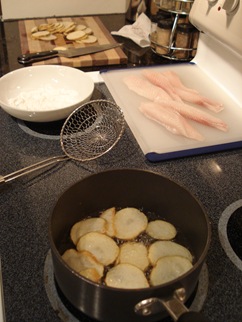 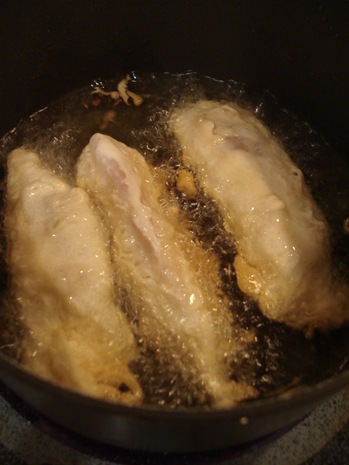 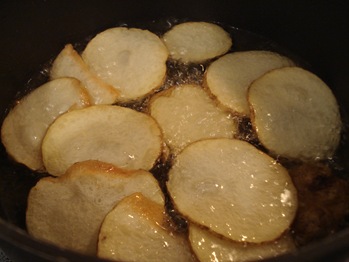 It ended up being quite delicioso! Kind of light a fluffy pancake tempura batter around juicy tilapia. Not something I’d want more than once a year (and definitely not as good as the real deal in England!) but still really, really tasty. 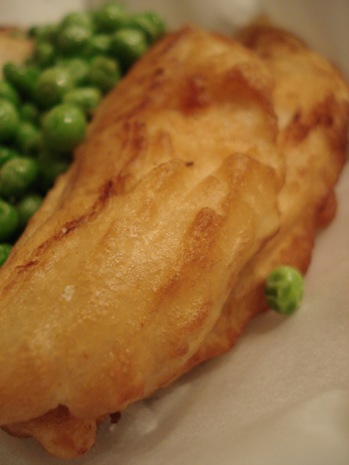 Except my peas were freezer burned 🙁 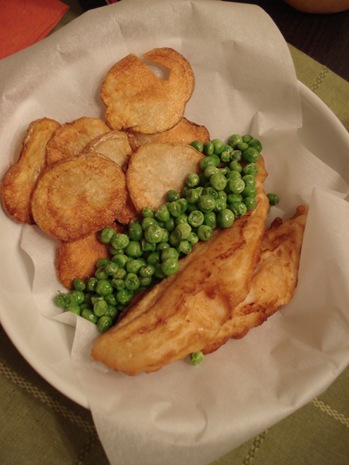 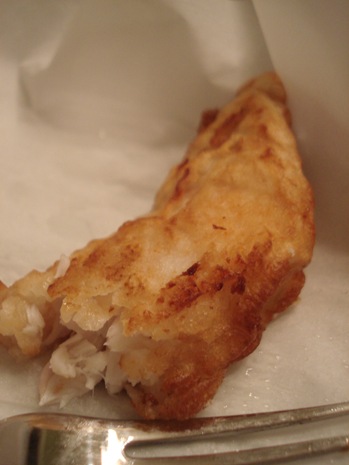 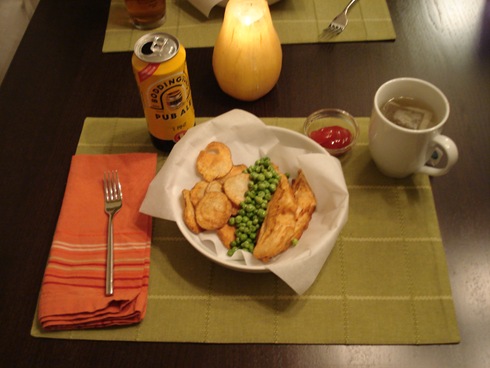 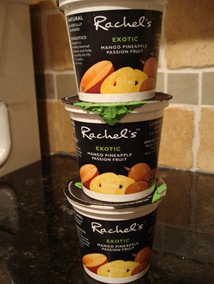 Preheat oven to 350. Line bottom and sides of 9 x 13 inch baking pan with foil (I actually form the foil to make it slightly smaller than 9 x 13, to make thicker bars).

In a medium bowl, whisk together flour, pie spice, baking soda, and salt; set aside.

With an electric mixer, cream butter and sugar on medium-high speed until smooth; beat in egg and vanilla until combined. Beat in pumpkin puree (mixture may appear curdled). Reduce speed to low, and mix in dry ingredients until just combined. Fold in chocolate chips.

Spread batter evenly in prepared pan. Bake until edges begin to pull away from sides of pan and a toothpick inserted in center comes out with just a few moist crumbs attached, 35 to 40 minutes. Cool completely in pan.

Would you all hate me if you knew I listened to Christmas Jazz while working this afternoon!?