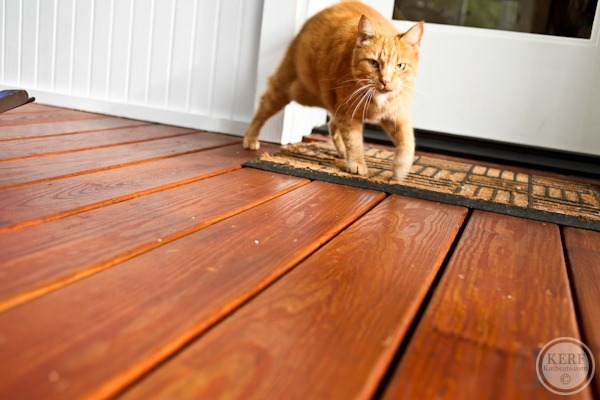 And she says HIIIIII to you all! 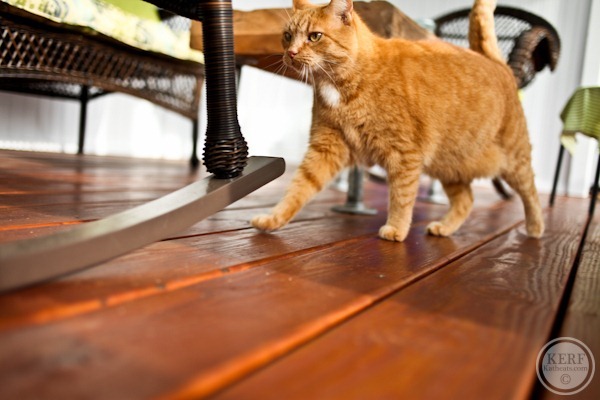 Today was one of those days where I didn’t eat breakfast until almost 10am – we slept late (8am), baby was hungry and showers needed to happen! 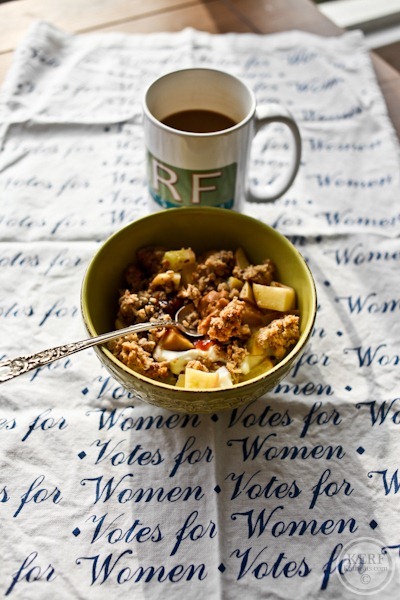 So a quick bowl of greek yogurt with none other than the delicious Cville Cluster Granola along with a microwaved chopped apple, apple butter and Barney Butter served for breakfast. 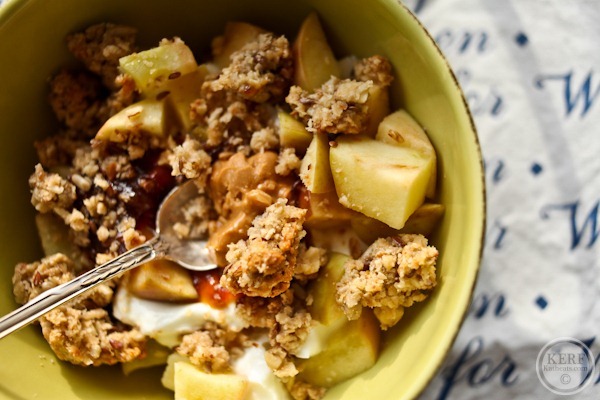 Matt surprised me with the Clusters – I have a portion control problem when they are in my kitchen they are so addicting! 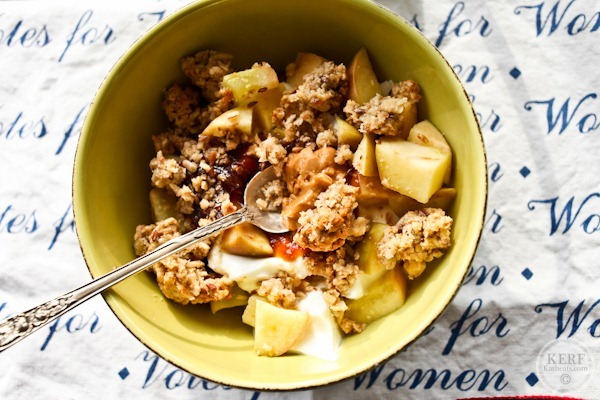 Matt was home this morning for a bit and did some preserving!! He received a HUUUUGE trash bag of green beans from our City Market neighbors who love to trade for bread, so he decided to use our pressure cooker to preserve them. 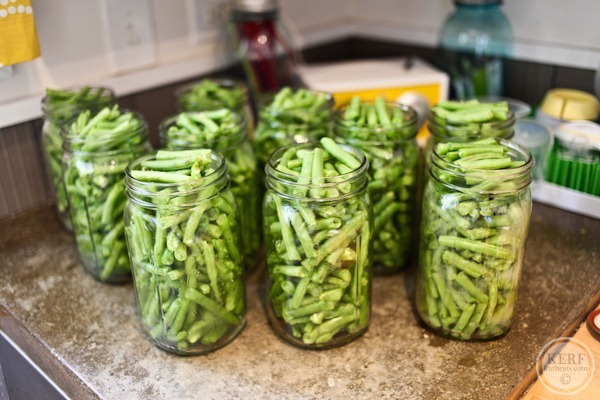 We both have a passion for canned green beans and are super excited to eat these for quick dinners!

He uses his grandmother’s pressure cooker – I leave the room in case it explodes from age! 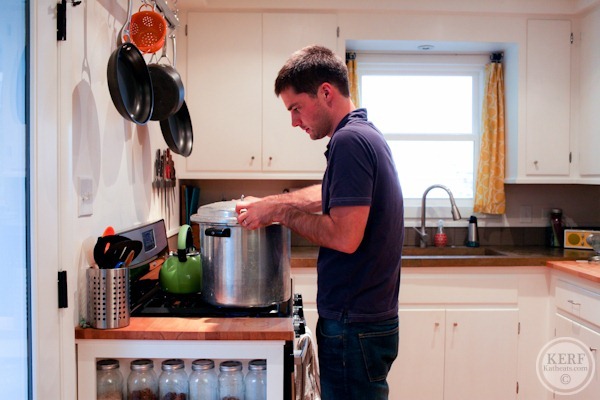 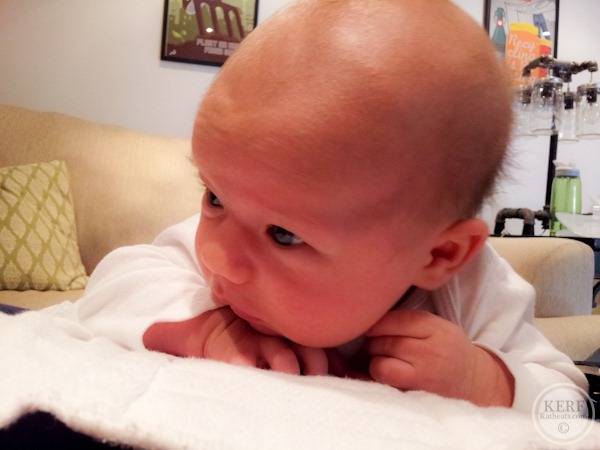 Maze and I went to see a lactation consultant today. Not because we’re having any problems in particular, but just because I have a million questions – it never hurts to ask!

Afterwards, we went by the bakery to see Matt! 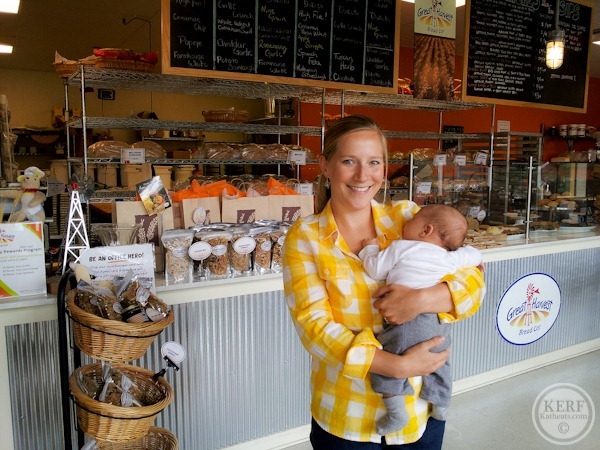 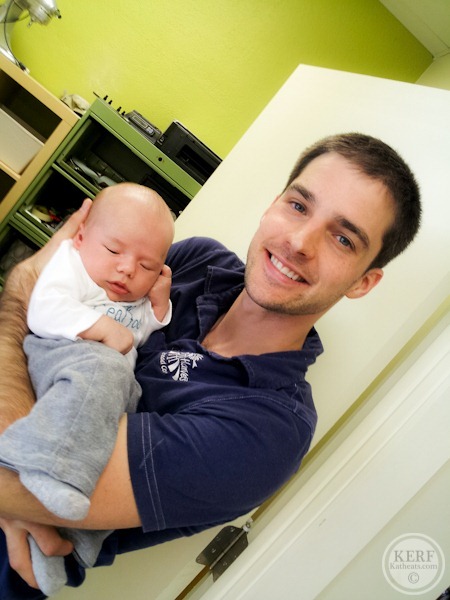 I miss being there – the lobby looked so good! 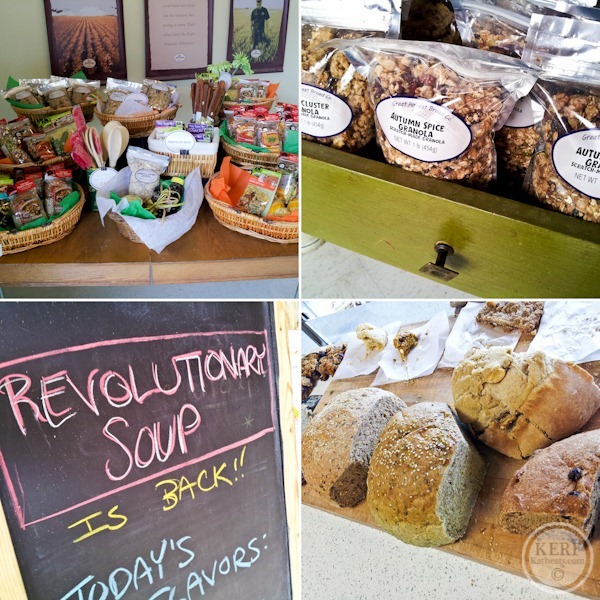 I also had to do a quick nursing session in the office – the view out! 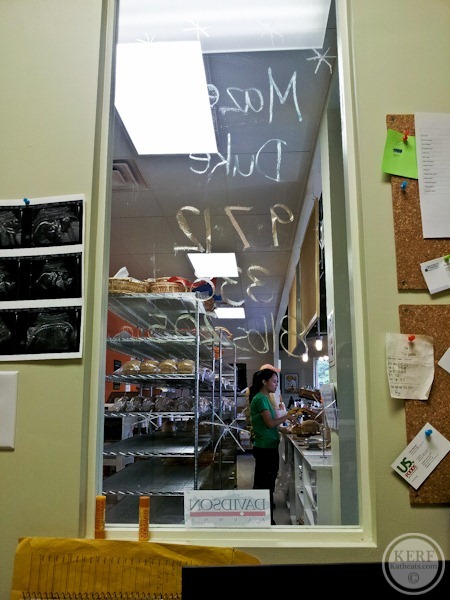 My favorite scuffins were on the breadboard and since it was 3pm and I hadn’t eaten lunch yet (thanks to a late breakfast and a lunchtime appointment), I had a quarter of one (they are huge) to tide me over – plus a taste of Apple Scrapple bread! 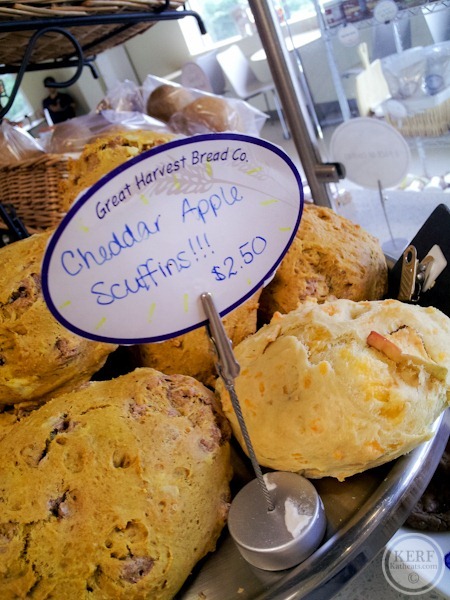 My lunch was actually waiting at home! 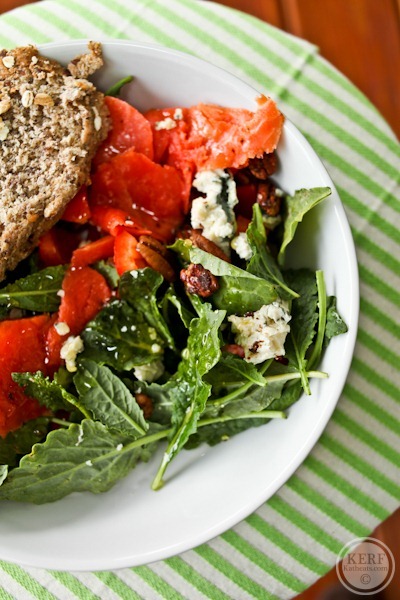 Knowing I’d come home hungry with my hands full, I prepared this before I left (when Matt was there to help out) and put it in the fridge for later. 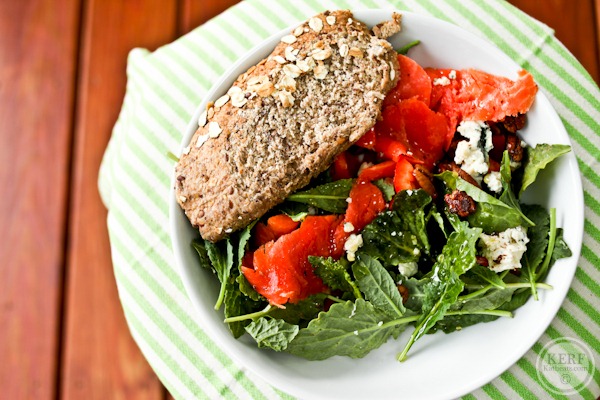 A mix of greens, chopped carrots + pepper, gorgonzola, spiced pecans and smoked salmon (!!) plus a slice of Cville Crunch. 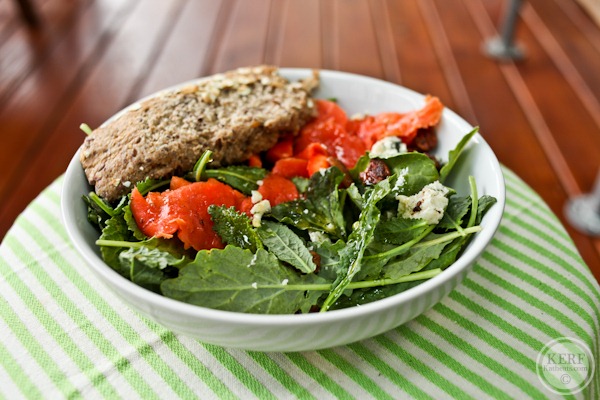 I think we are going through a growth spurt – lots of nursing happened today!! Thanks, Rachel, for the appropriate outfit! 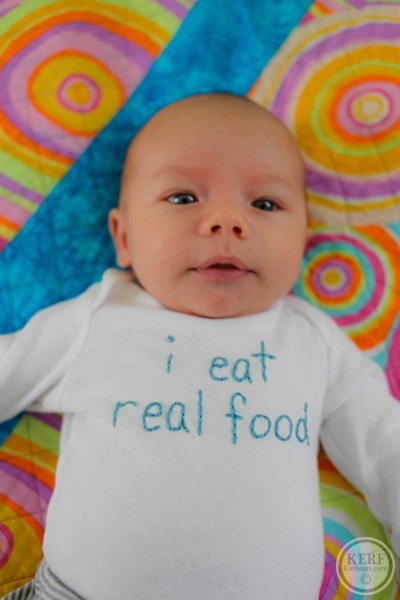 After the 5pm feeding, I thought “I should go running!” (Matt was back home). I’ve been trying to go all week, but it just kept getting pushed off the list.

AND THEN IT RAINED! What timing. Bummer.

But then it stopped raining and despite the fact that dinnertime was looming, I decided I had no excuse and went out and RAN! It’s been 6 weeks to the day I went into labor. 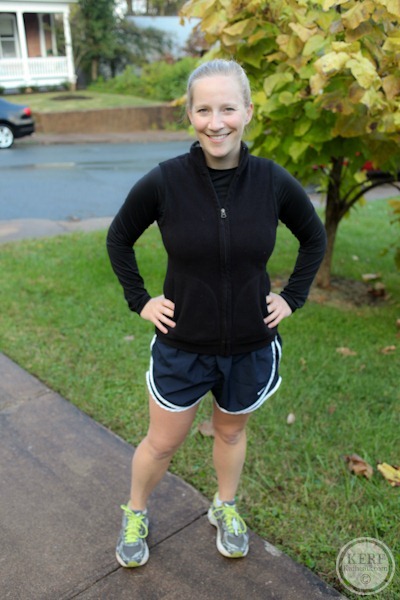 I had no idea where my Garmin was and my iPod was totally dead, so I just left the house and ran. I covered just shy of 3 miles. It wasn’t easy, but it wasn’t hard either. My insides felt great and my breathing was fine. My legs got pretty tired by the end, but I made it!

I am most definitely going to be sore though! Maze was hungry right when I returned (we had a pumped bottle ready in case he was hungry sooner) and I sat right down to nurse him when I walked in the door. When I got back up 30 minutes later I realized that was an unavoidable mistake – I should have stretched right after!! Ouch. My abs are sore even sore!

[Memory: It was a late-October day in 2005 that I ran for the first time after my foot surgery. This run reminded me of that run, and both times I was SO thankful to be running again!] 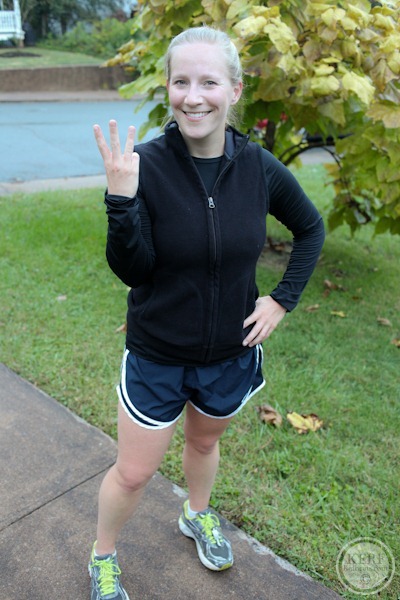 A quick shower and dinner came next. 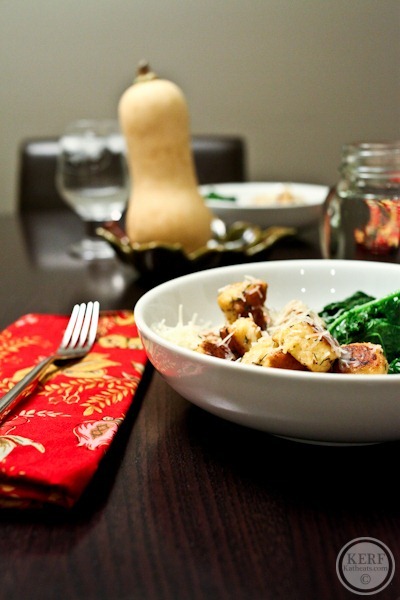 Remember when I made this recipe for the Wisconsin Cheese Council and blogged about it here? I have been thinking about that lemon Ricotta Gnocchi for the past two years! (GOSH time flies!!) 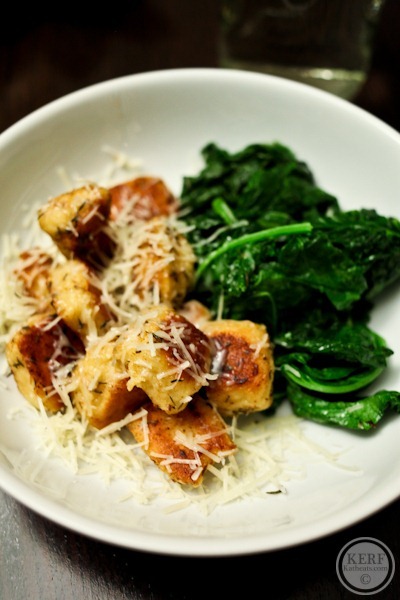 I love that this gnocchi doesn’t involve any potatoes – just simple ingredients that come together fast.

Matt made the recipe while I fed Maze again and we loved it again! 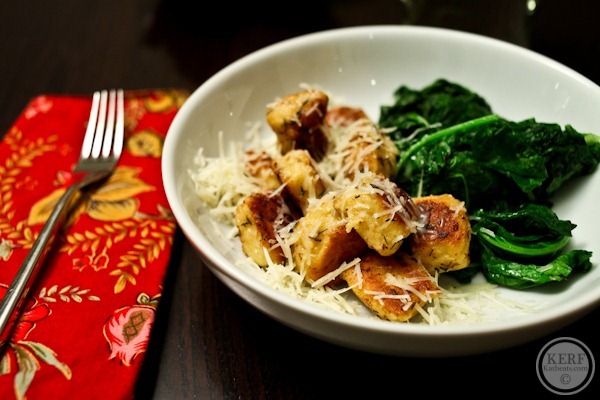 Served with braising greens from our garden (the whole garden’s worth to create two dinner portions!) that Matt sauteed in lemon juice, olive oil and garlic. 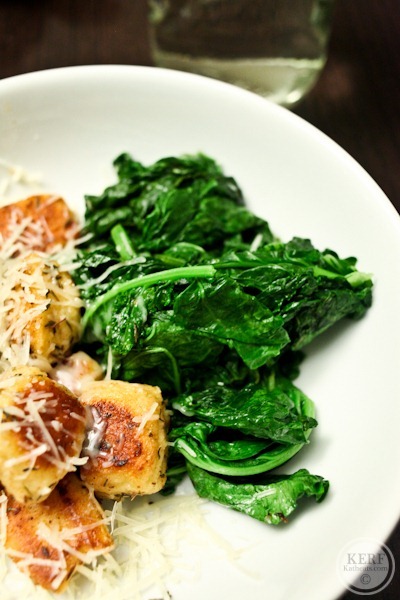 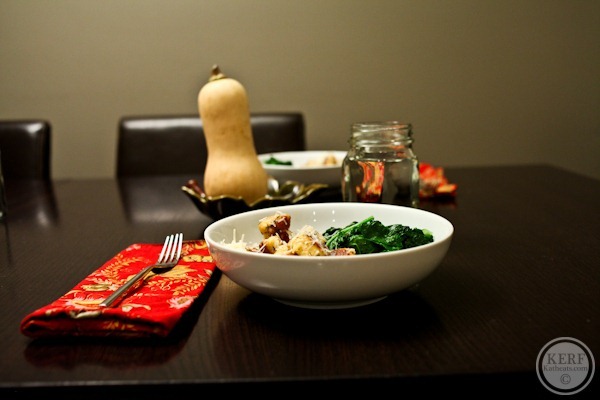 A simple dinner that was supposed to have beans involved too – but we forgot!

Instead, I filled up my last space of hunger with a ice cream + milk mash for dessert : )