I’ve never been a wrap person (if I’m going to eat a tortilla, I always choose quesadilla style) but I thought I’d give it a try since I bought the “burrito size” tortillas from Alvardado Street Bakery yesterday at EarthFare.

Well, I’d give myself a B+ on my efforts. I put a bit of the leftover quinoa and bean casserole down, then topped it with a sauteed portabello mushroom and zucchini strips, and topped that with mexican shredded cheese and hot sauce. Looks pretty tasty! 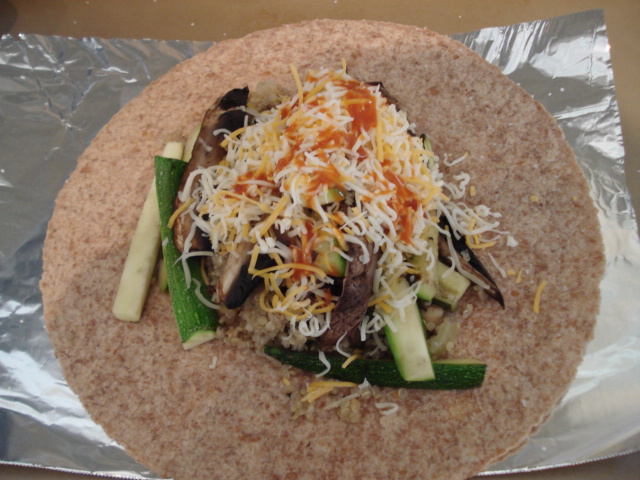 I microwaved the tortilla to get it nice and soft, but what do you know – it ripped on me several times and my toppings fell out 🙁 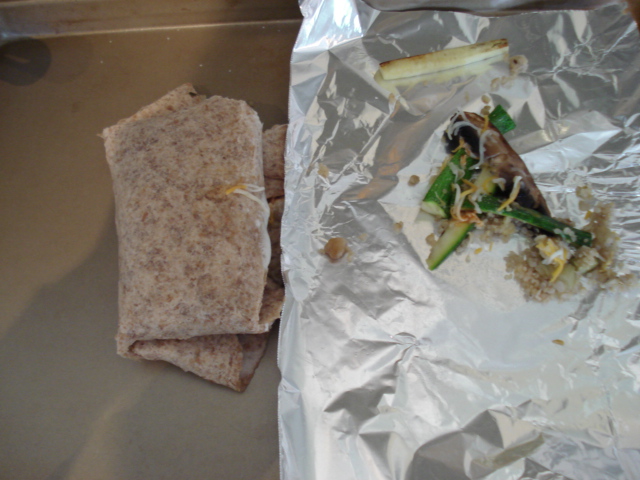 Nevertheless,  I baked it for 10 minutes to get it nice and crispy and it ended up being pretty successful overall! 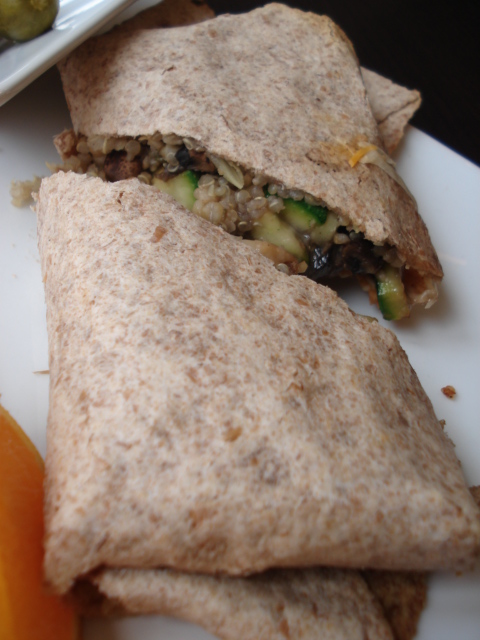 It definitely held together nice enough for a photograph 🙂 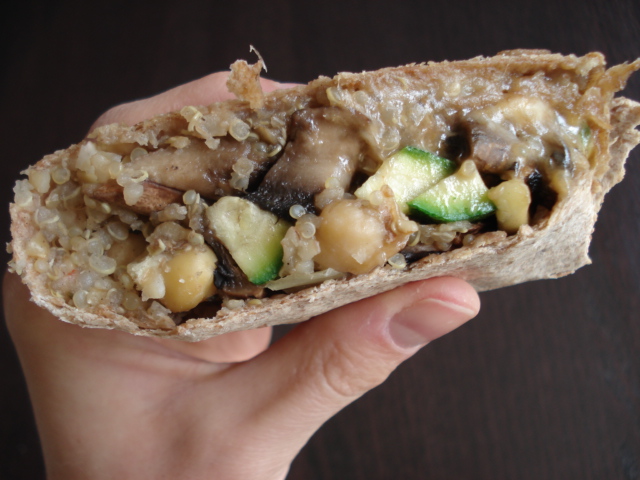 On the side I had oranges – 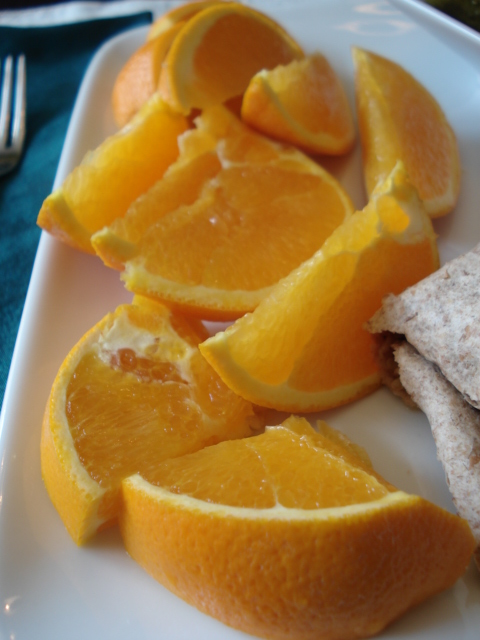 And two dill pickles! (In a bowl so their juice didn’t get on the oranges 🙂 ) 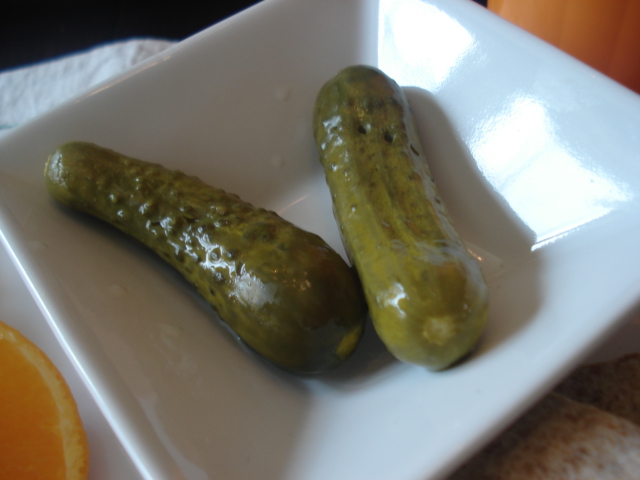 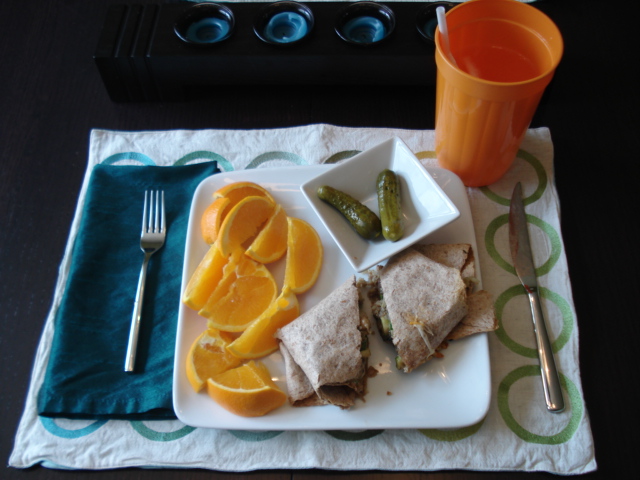 I’m actually perfectly full, although halfway through the wrap I didn’t think I would be. It settled nicely. Lunch was about 500 kcal, 11 grams fiber and 20 grams protein.

Turns out there was a NAIL in my tire!! I’m quite thankful actually because the repair was only $24 and if there had been nothing wrong with it it would have been $40 for the diagnostic tests. And thankfully I didn’t need a new tire!

I ran around 3 miles through our neighboring neighborhood and then up to the dealership. I can’t put into words how beautiful and springtimey it was out there. Birds chirping, all the trees in bloom.

After picking up my car I decided to take Eat, Pray, Love for a walk. Yes, I read a novel while walking. It actually worked quite well! I know you guys will make fun of me, but it was a wonderful way to spend 30 minutes!

Then I buckled down for some Stats and Medical Terminology, which is how I’m spending the rest of the afternoon. Around 11:00 after my workout I got really hungry, so I had a small piece of pumpkin bread toasted with Smart Balance and a cup of tea. It held me nicely until I sat down to lunch at 12:45. 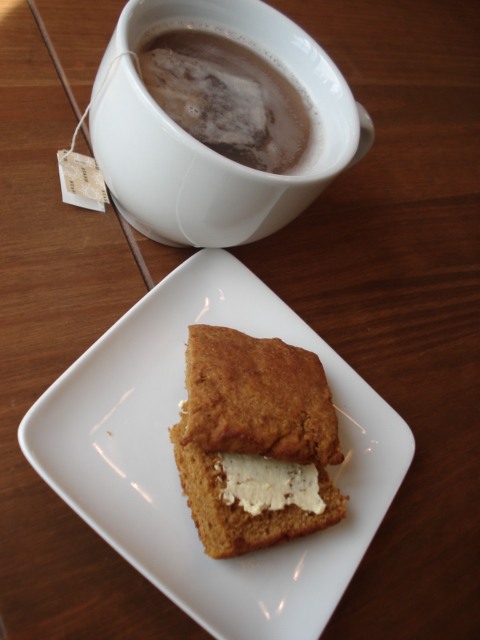 Did anyone catch Davidson on The Early Show today!? I’m sorry I couldn’t drive up to campus to participate, but the school sure is getting some attention this week! We’ve got a bunch of college friends coming to town this weekend for the Camden Cup Horse Race in South Carolina (the husband’s frat tradition). I went for two years and had enough of the drinking and vomiting at 10:00 a.m. (yes, last year the group beside us from another college had some guy throwing up when we arrived – gross!!!) I decided I’m not ever going again. But anyways, the husband is going and so are a bunch of his friends so they will all be arriving in time for the big game tomorrow night. We’re going to dinner and a bar to watch with a bunch of other alumni. Crossing my fingers it isn’t a blowout against our team – it would be nice to at least give the other team a good challenge – and even nicer to win!