No, this is not an April Fools joke 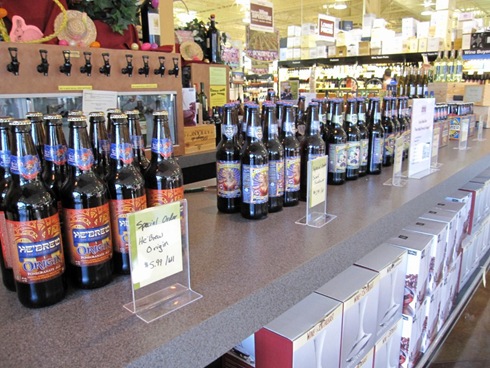 Matt and I stopped into Total Wine this afternoon and happened to see a flyer that say “Beer Class on April16th.” Uh, that’s today!!!! It was only 5:00 so we went home and emailed our friends to see if anyone wanted to join us for a beer “dinner.” Much to our surprise, the birthday boy himself, Kate and Kelsey all said they were up for a party!!!

I had a few kashi crackers to tide me over and we were off. 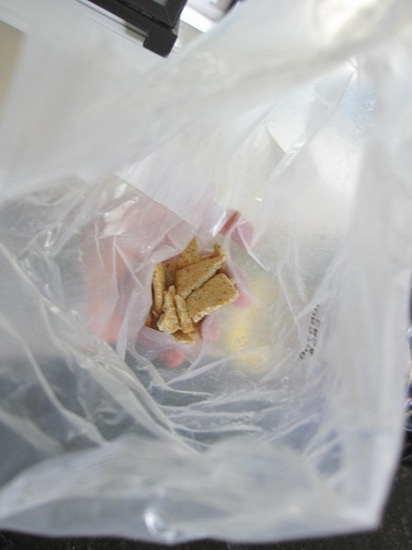 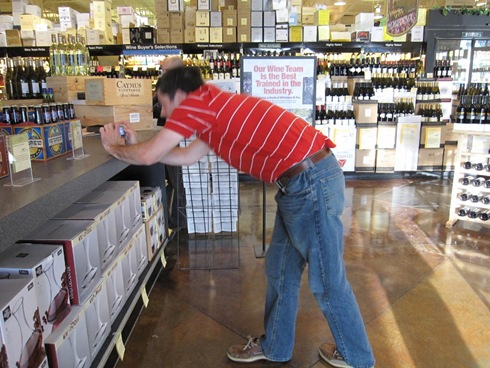 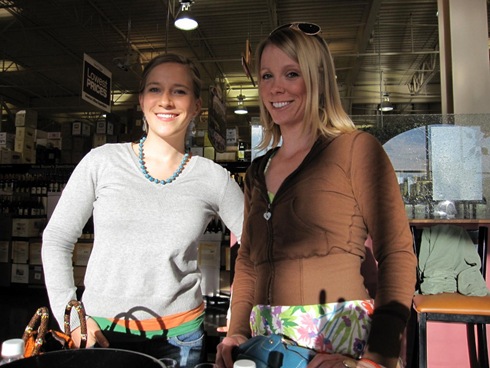 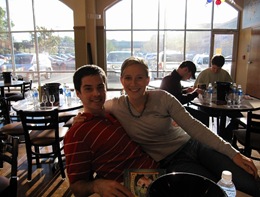 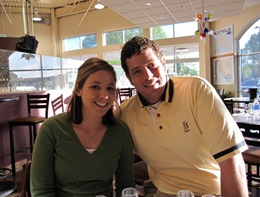 The class was featuring two brands – Shmaltz Brewing Co.’s Coney Island Craft Lagers and the He’Brew line. Heading the tasting was Don Richardson of All Good Brands. DON IS THE MASTERMIND BEHIND THE COTTONWOOD PUMPKIN ALE!!!!!!!!!!!!!!!! My favorite beer ever. He actually invented it!! You can imagine how excited I was 🙂

Included in the tasting fee was some munchies – mini hamburger sliders and two kinds of flatbread: spinach feta + bbq chicken (with onions). I loaded up on the spinach feta, as I was pretty hungry. 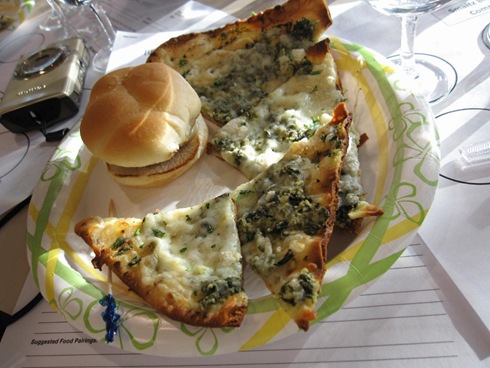 Along with a little slider 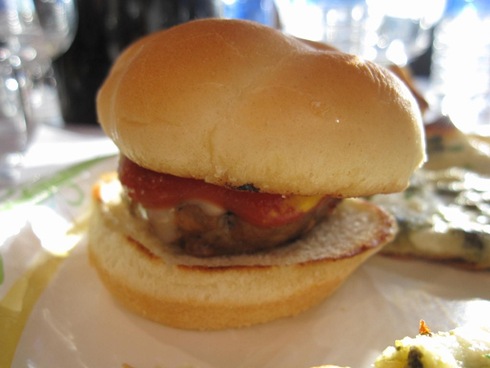 Then came the brews.

First was the He’brew Genesis. It was surprisingly full-bodied for such a light color. It was slightly bitter, but I liked it! 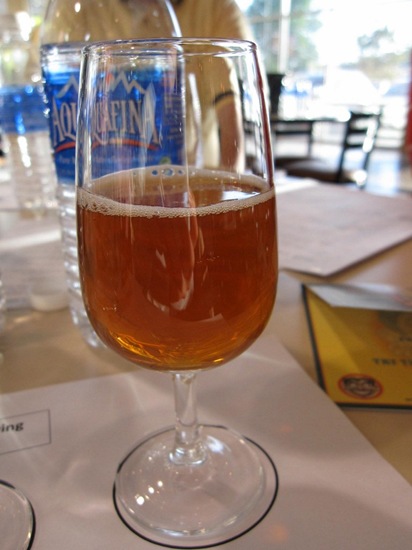 #2 was the He’Brew Messiah Bold. This guy was darker – almost like a bitter New Castle. I loved the chocolate malt, but would have preferred less hops. As Don put it, it wasn’t “Over the top hop” – just enough. 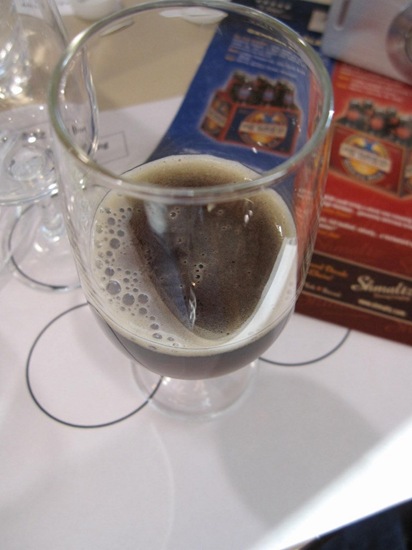 Seconds! (and an onion-free BBQ) This flatbread was SO GOOD. I normally am not the biggest fan of spinachy things (other than spinach!) but I loved this. I think it was the thin crust and fresh taste. 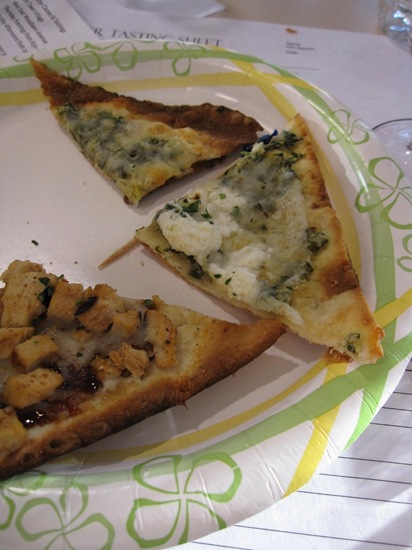 Third was the Coney Island Lager. This was my favorite of the night. It was very mead-like with notes of honey. I really would have blindly called it a honey beer! Loved it – we got a huge bottle. 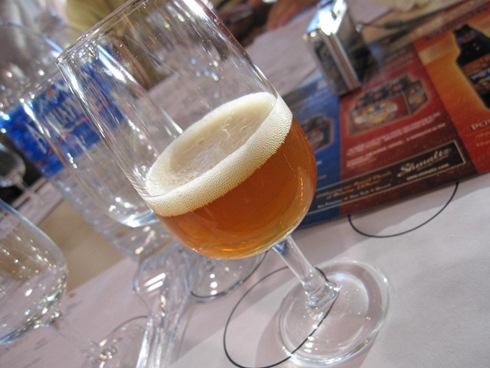 Fourth: the Coney Island Sword Swallower. This guy was way too bitter for me. Normally I’d drink anything put in front of me, but since I have class in the AM, I tried to consciously not drink too much of what I didn’t love. I think 75% of of this still went down though 😉 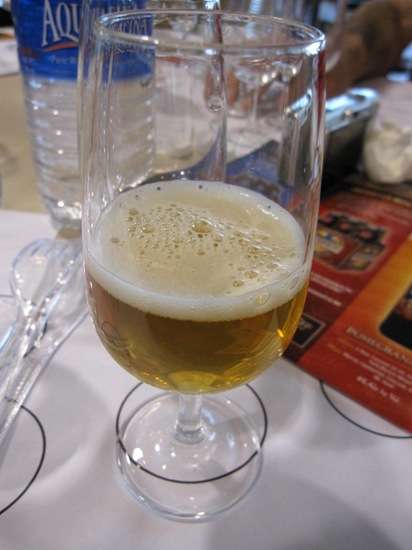 #5 was the He’Brew Origin, a pomegranate ale. This one was actually really good, but tasted nothing like POM! I liked its amber notes, and it was almost caramel-y. It had a flavor that I couldn’t put my tongue on. And honestly, it smelled kind of like wet sponge – but in a good way! 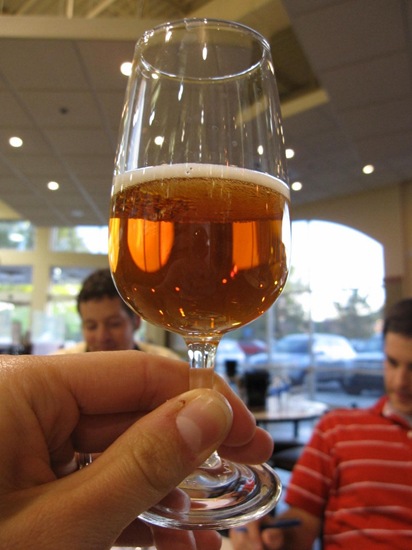 Lastly, the Coney Island Blockhead – a 10% alcohol barley wine. This one was really good – except for the alcohol!!!!! I would have preferred it as a lower alcohol beer. The flavor was great – medium bodied and flavorful, but the high alcohol left a burn that I associated with drinking too much and knew to stop sipping! This guy is for the strong at heart ( <— my husband). 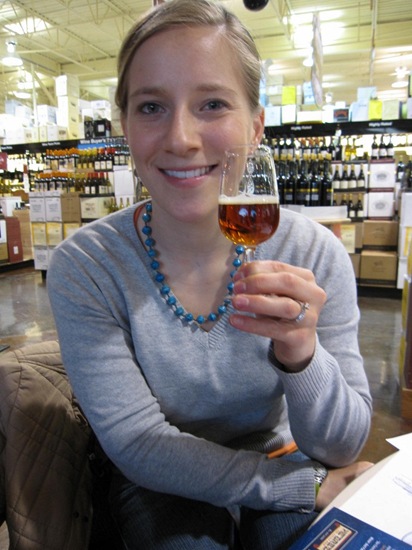 We were free to go back for seconds on any of them. I had another taste of the Coney Lager. And maybe another sip or so of a He’Brew. And maybe another flatbread triangle 🙂 (You can see my leftover samples in the back on the right). 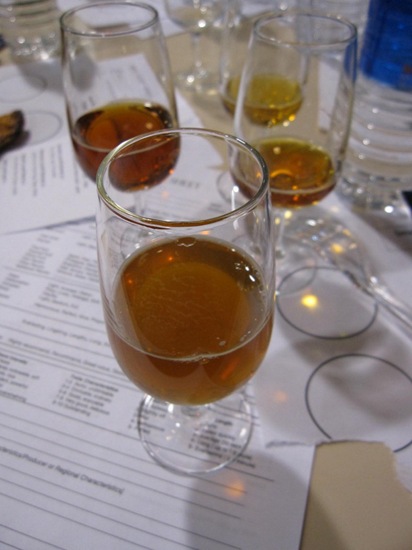 What a fun night! Hope Nate got his fill on his b-day. Tomorrow night we’re going to a party at their house to celebrate!!

I only wish there had been a salad there – I was feeling empty for a while, but then the beers settled 😉