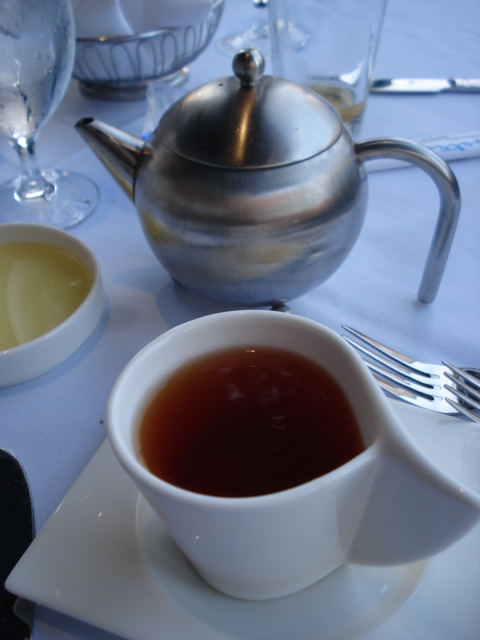 So to make a long story as short as possible, the husband used to carry around a duplicate copy of my ID so I wouldn’t have to bring my wallet everywhere we go. Well, the license expired, I got a new one for driving, but he still carries around my old one for when we’re out. Well, for the first time in 6 months I was DENIED WINE!!! She refused to take it and was kind of rude to us. While I completely understand the legal reasons why she could not serve me, she made no apologies when we said I was 25 and married (showed her my rings – who gets married at 20!?) She was just not that nice about it!

While there are lots of times (especially mid-week) I don’t order a drink with dinner, of course I really wanted a glass now. But I had to settle for Roobios tea 😥

I had a little of my MIL’s salad to start – 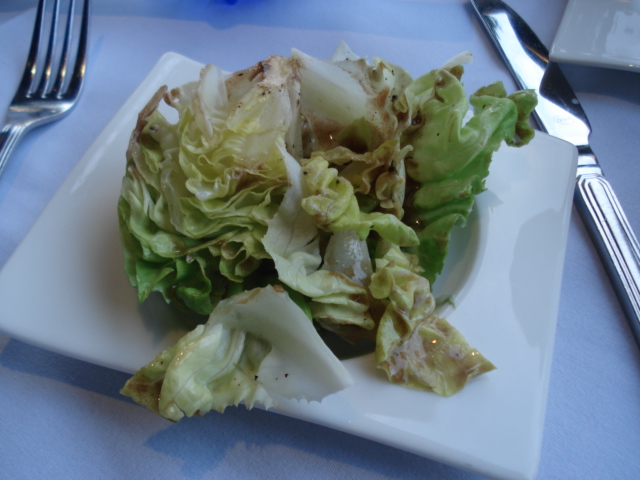 The sushi was beautiful!! Unfortunately it didn’t taste as good as others we’ve had. I think because it was chilled. I like my sushi warm. I learned to eat it at a restaurant that serves the inside cool and the rice hot, so I always miss that. I think grocery store sushi in a case is disgusting! But don’t get me wrong – this was GOOD just not great. 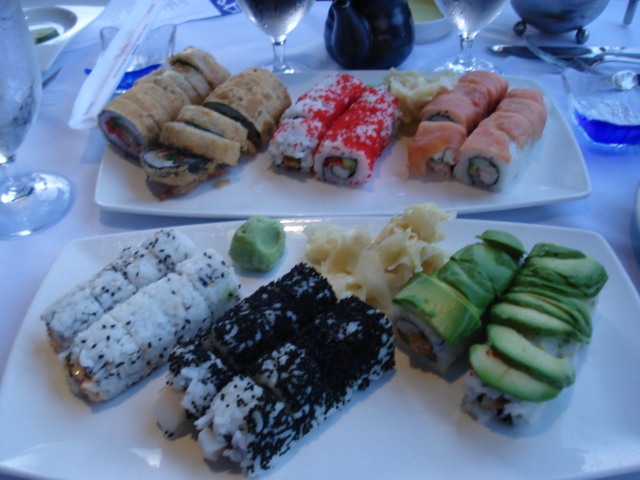 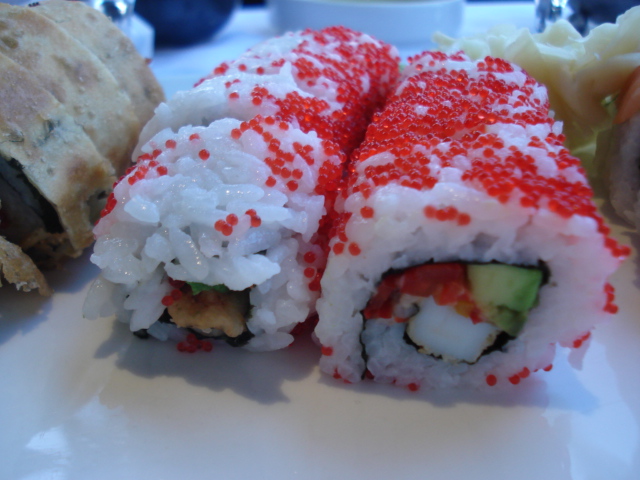 Back in Black with blackened sea bass 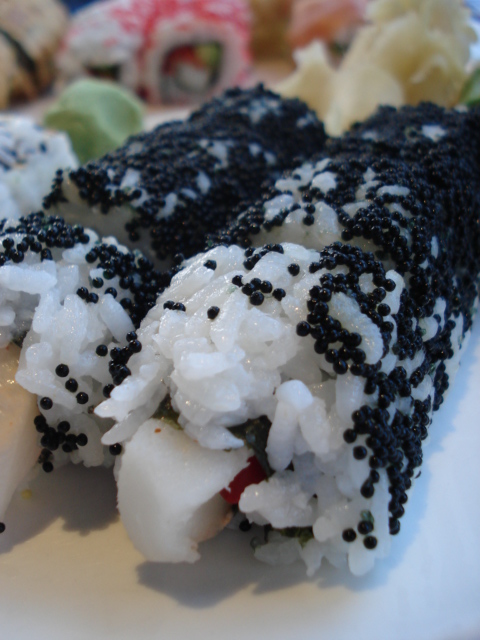 And the best roll of the night (can you guess why!?) – the Fried Blue Point Oyster Roll with oyster! 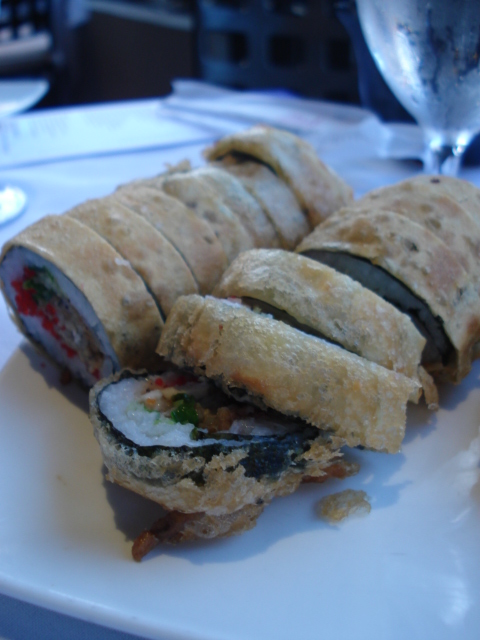 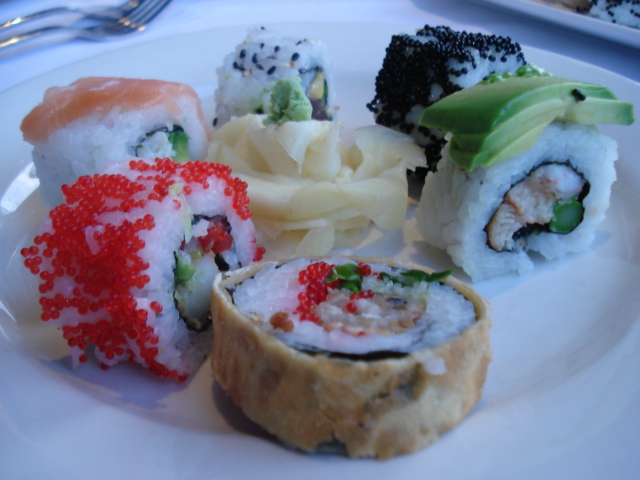 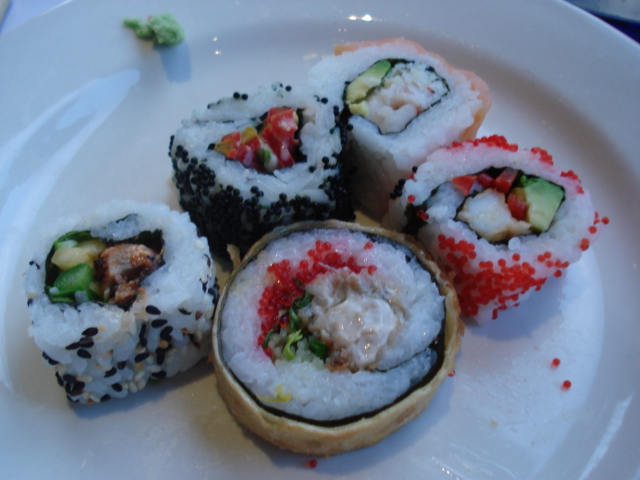 And there was a Round III with 3 rolls but I don’t know where it is!?!! I thought I took a photo but I guess I didn’t 😳

I know some of you have asked me how I estimate calories in sushi. I generally try to order rolls that aren’t fried and don’t have mayo-based sauces (everyone knows those “rules,” right?) but inevitably my company always gets them and I eat them anyways and love them 🙂

So my contribution to the order tonight was the Alaskan Roll with crab, salmon, shrimp and avocado (all pretty low-cal and healthy ingredients) and the Hawaiian Roll with tuna, mango and asparagus – both are probably close to 30-40 kcal per piece. The bigger, juicier ones were probably closer to 60-70 a piece (Oyster Roll nearing 100?) so when I have a mix of different kinds I basically just average about 50 kcal per roll and call it a day. I could be off by hundreds, but my goal here is just to get an idea of how many rolls to eat. (And yes, tonight I ate more than my 8-10 planned because it tasted good!)

Oh, and before I forget – Afternoon Snack of a pile of pumpkin topped with TJ’s Fiber cereal and H2H 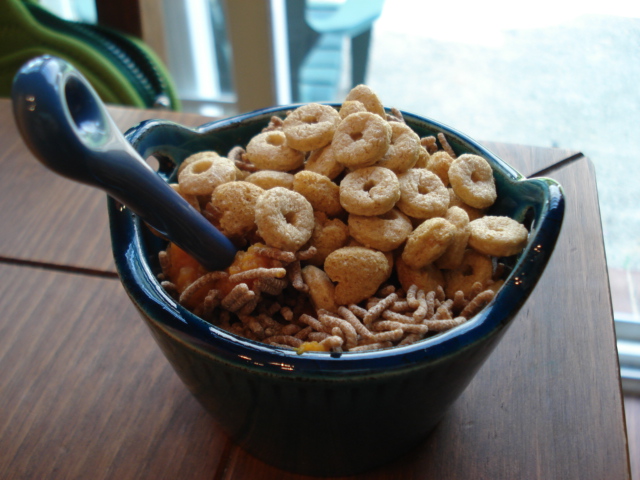