You are here: Home / Lifestyle / Hunger + Flights: Right On Schedule

Hello from high in the sky!!! Blogging is such a good way to pass a flight

I made the mistake of getting a coffee, and now my hands are shaking so bad I can barely type!!!

I was up at 4:50 this morning, after not falling asleep until after 11. We are off of the early-to-bed, early-to-rise routine and the husband fidgeted for about an hour. Then he got OUT of bed because there was a roach shadow on the curtains. He got up to see if it was inside or outside the house. Luckily it was outside, but it was still really creepy. My hero!! Always on the watch for me 🙂

Anyway, we got up at 4:50 and were out the door at 5:35. I asked the hub. to take me to the airport to save on parking, so I had the luxury of being chauffeured. It was SO. much. nicer than having to drive in the dark, park, take the shuttle, all with 2 heavy bags. Thanks husband XOXO.

I had to get from 6am to about 1pm before a real meal, so my breakfast plan was to spread food out every few hours rather than have a big meal all at once. I also decided to take advantage of the airport options (which are better than you think and exciting for a change) and get 30 minutes more sleep than making oatmeal or having cereal at home. My stop: Jamba Juice!

I wanted something more than just fruit because I needed it to last a few hours, so I settled on one of the yogurt + soymilk blends: Bright-Eyed Blueberry (I think that’s what it was called). It was smaller than I expected (I got the 12 oz) but was perfect for first thing in the morning. 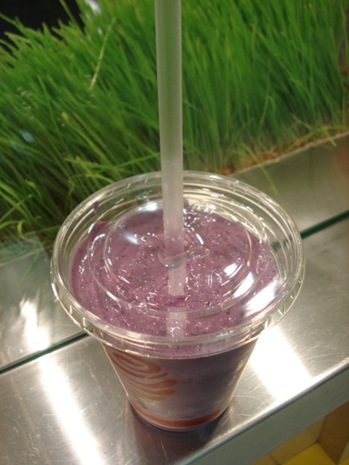 I almost didn’t get coffee at LaGuardia because I wasn’t really hungry or cold, but then I smelled some hazelnut at Au Bon Pain and decided to get some anyway. With a touch of 2% milk – 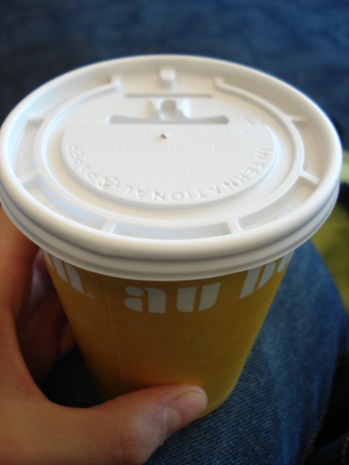 I was lucky to have Boingo Wireless at LaGuardia. Boingo gave BlogHer conference attendees a few months free so I couldn’t have been happier. But after I logged on I saw that KathEats.com was down – uggg. After a 20 minute chat with BlueHost, it was up and running again, but certainly not the best way to spend time in an airport. I’ll be spending more time in LaGuardia on Sunday, and was ecstatic to find that Au Bon Pain also has an OATMEAL BAR like the SF Soup Co. did a few weeks ago. I should be arriving into NYC around 9:00 on Sunday AM (without delays, that is) so maybe I’ll plan to have breakfast there and just something small in Boston early (my flight is at 8am, which means I”ll have to be up at 5ish again). I did bring a packet of instant with me to have with hot water if need be, but I’d rather wait and have fresh oatmeal with sliced almonds, raisins and of course a banana. I also saw tons of good bars like Nectar and Clif (would be fun to try a Clif bar) but no PB LaraBars 🙁

NYC from the sky!! I REALLY wanted to go spend a few hours in the city… And, haha, one guy saw a tiny golf course and said “Hey, I think that’s Central Park!” 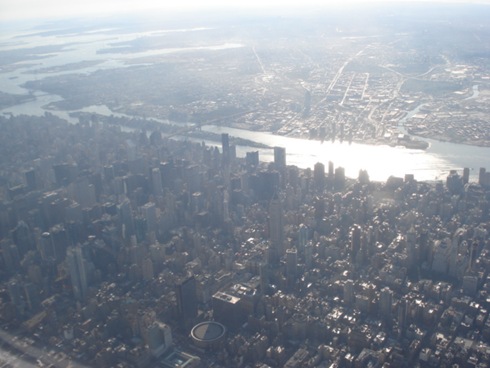 Our flight took off right on time (woo hoo!!) and my hunger was punctual as well. My stomach started growling right at 10:30 so I brought out the ol’ muffin with AB and jam that I packed last night. It was SO delicious. Food sure does taste good when you’re hungry. 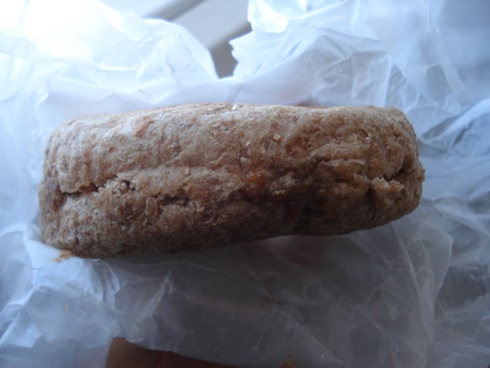 And last but certainly not least! The husband told me he had a surprise for me and I’d have to find it. Well I did when I uploaded my photos!!! HILARIOUS!!! 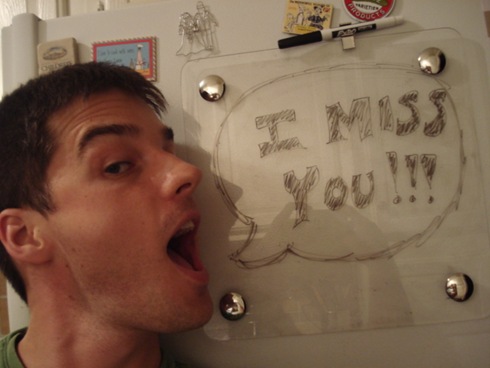 We’ve got a big day ahead! See you guys late tonight 🙂