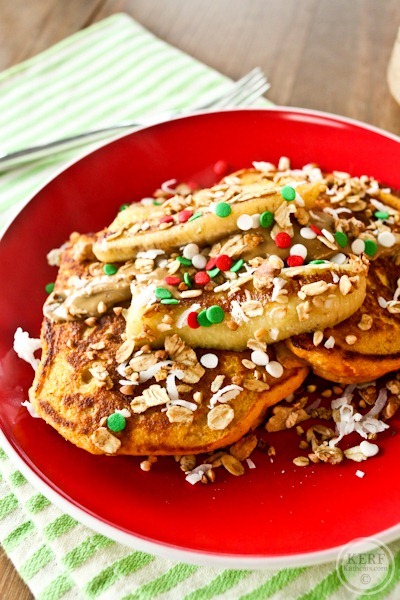 Some merry Christmas cakes to start the day! We didn’t have the best night’s sleep last night. I was up for the better part of the early morning and kept telling myself I could just sleep in if I needed to recover. But then it was morning and then I smelled the coffee and then I thought about pancakes and soon enough I was up cooking them! 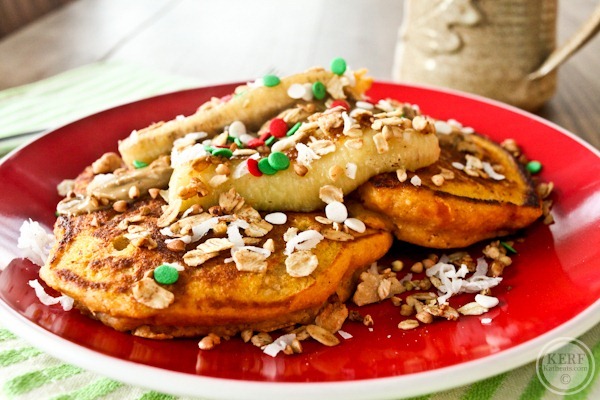 These were Kodiak cakes with 1/4 cup pumpkin stirred in topped with banana, granola, sunbutter and some Christmas sprinkles! 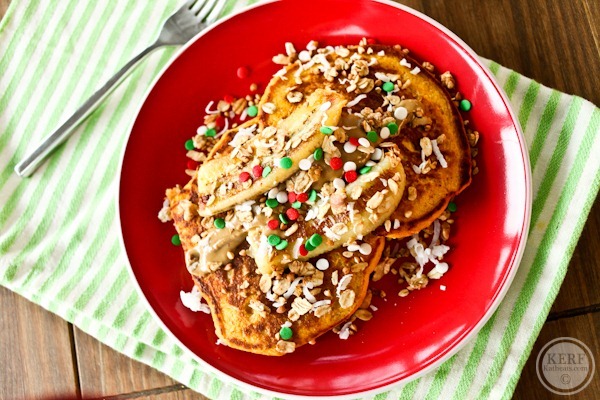 Santa Claus is comin’ to town. 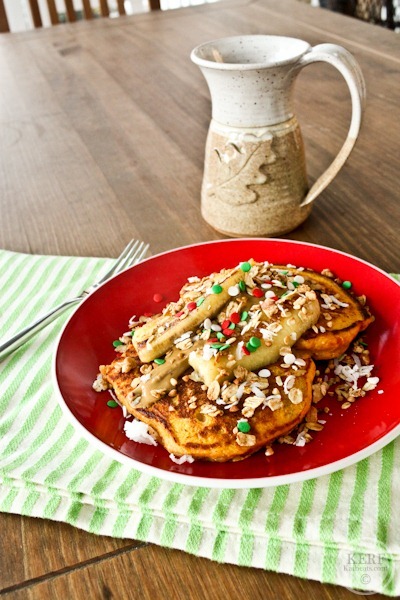 Maze and Matt had some fun play time before work – they did not want to part! 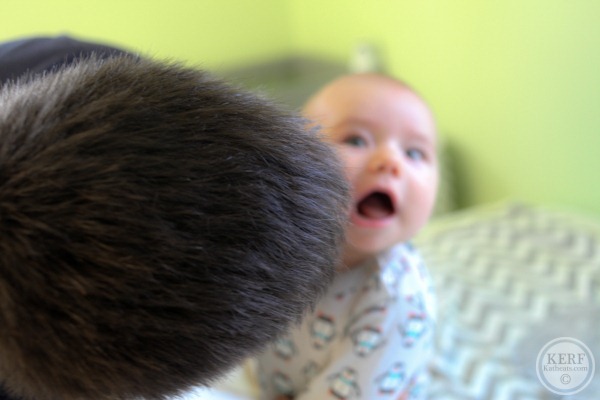 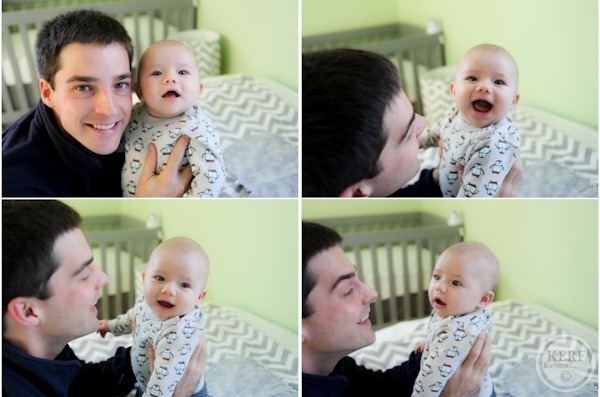 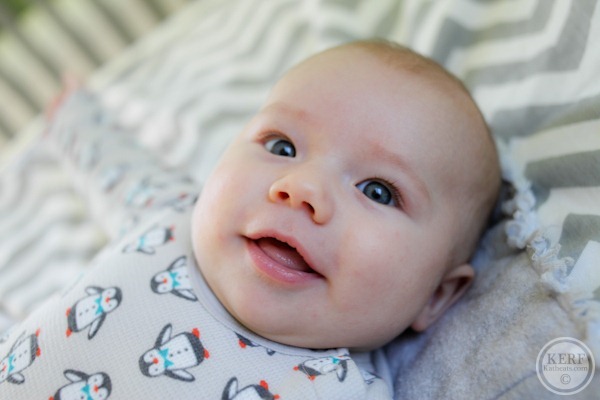 I worked on the computer during naptime today (cloth diaper post underway…) and also made my lunch an hour before I was ready for it. Gotta make hay while the sun shines! 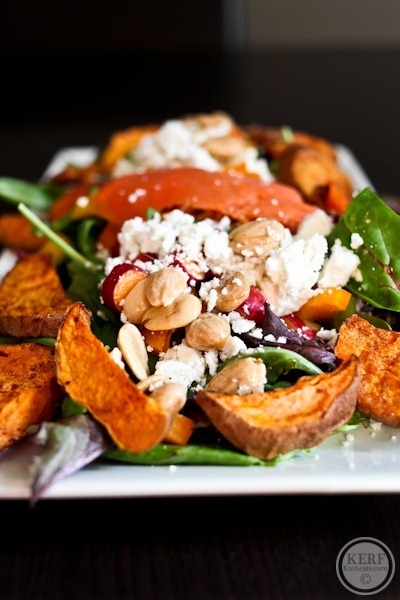 When it was time to eat, I had sweet potato slices baked and a salad assembled and just had to add the fun toppings! 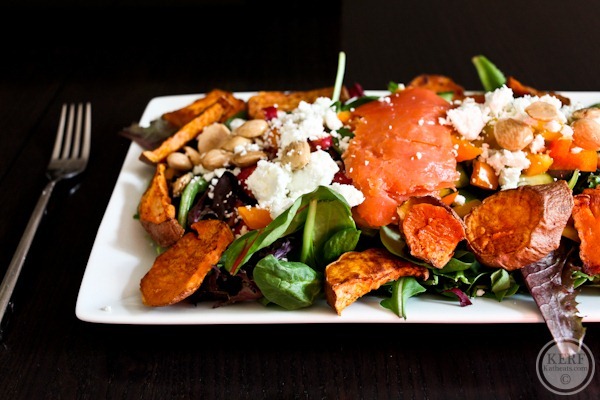 This was a pile of mixed greens, bell peppers, carrots from our garden and cucumber in a drizzle of oil and salt.

Next layer was goat cheese, a sliver of smoked salmon and almonds. 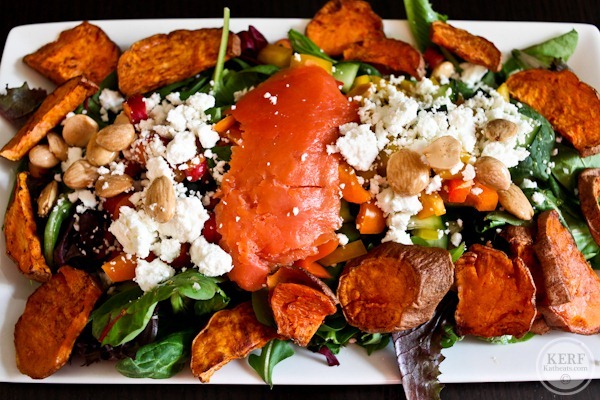 This salad totally rocked! Sweet potatoes, goat cheese and salmon are 3 of my top 10 favorite foods (don’t ask for the others – I could never decide! Although Greek yogurt, oats and buttercream frosting would be on that list!) 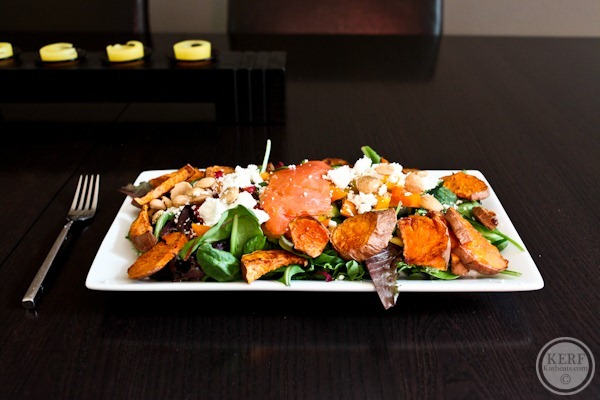 Later this afternoon I met some friends on the trail for a walk. Stroller power! We covered nearly 4 miles in 90 minutes and the babies loved every second. 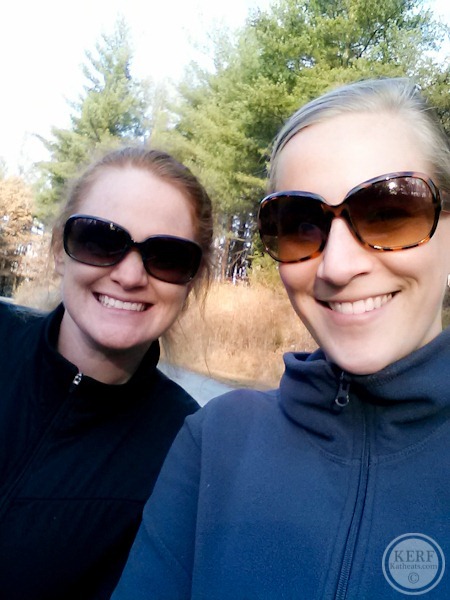 Is your mama a llama?! 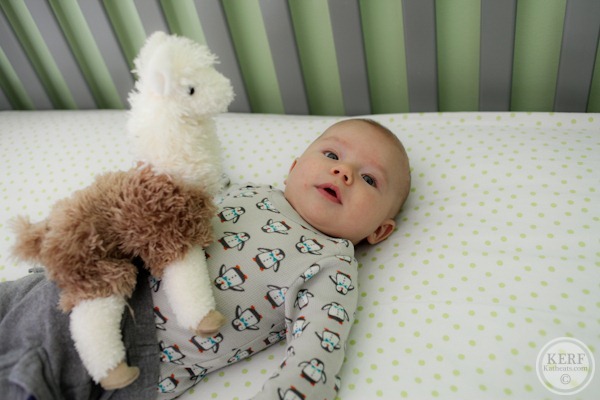 Post hike snack was chopped pear with granola and almond butter with chia seeds on top. One of my very favorite snacks!! 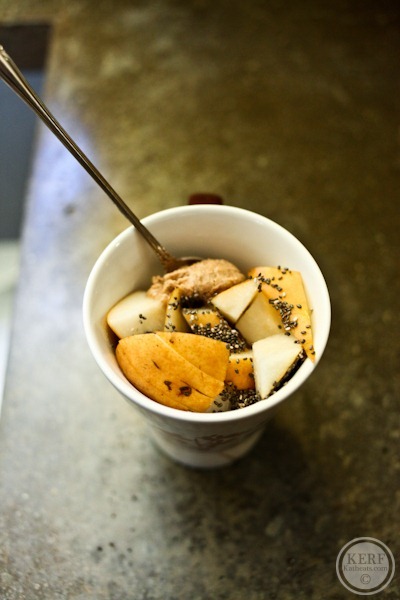 This evening, Matt and I had the pleasure of attending the Junior League Holiday Party as a guest of my friend Sarah. It was fun to put on heels and a dress for the first time in a looooong while! 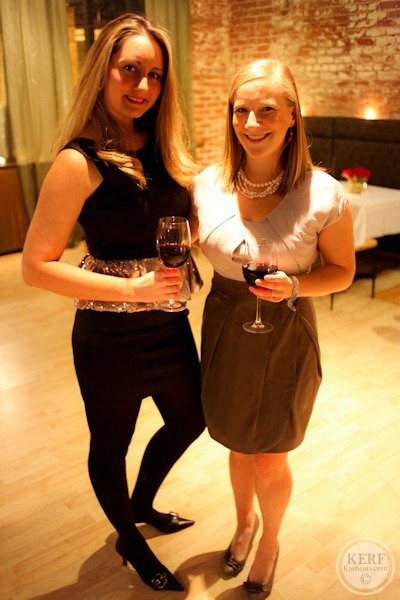 Karen graciously watched Mazen while Matt and I went out together {thanks Karen!}.

We walked to the party – I wore boots and packed my heels on my back and swapped right when we arrived. 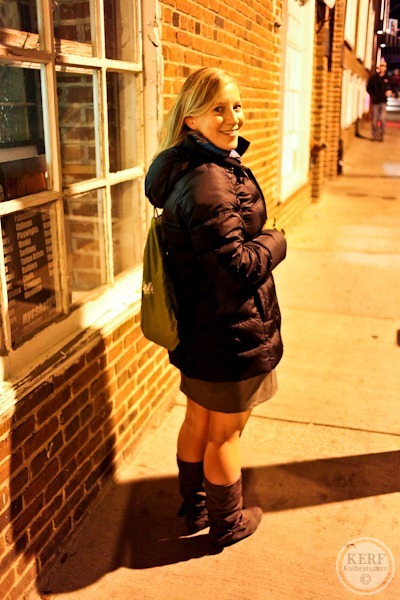 The party was a blast – tons of amazing apps from Bang! 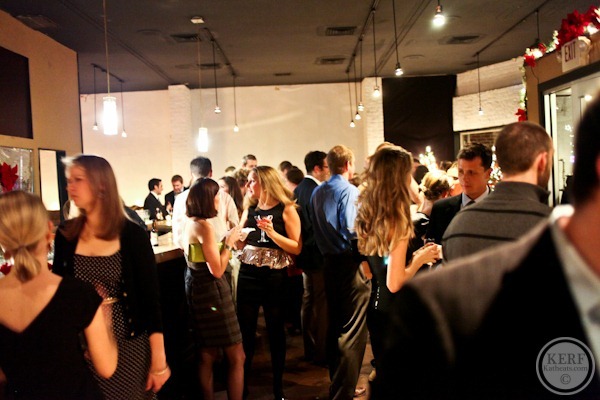 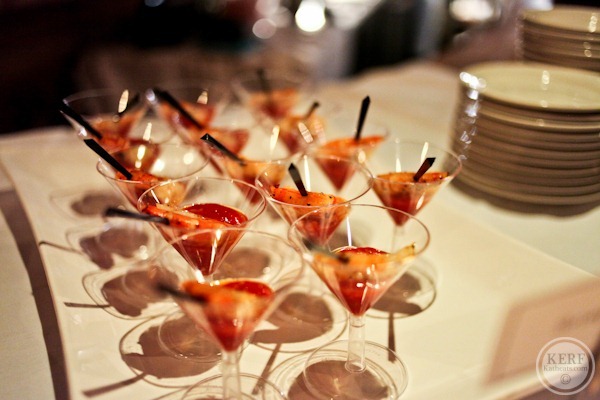 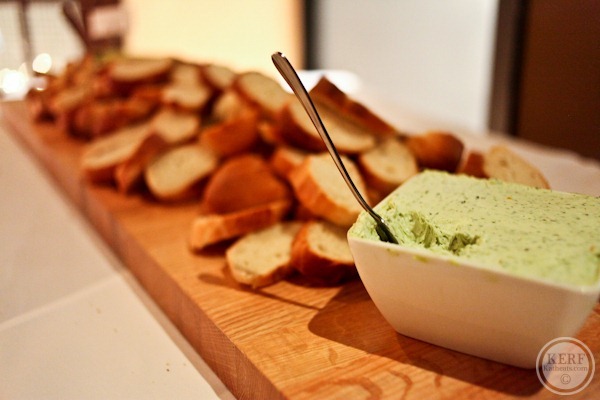 Tomatoes with basil and mozzarella 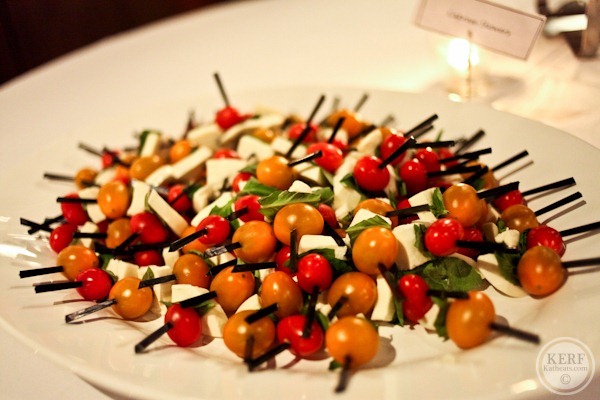 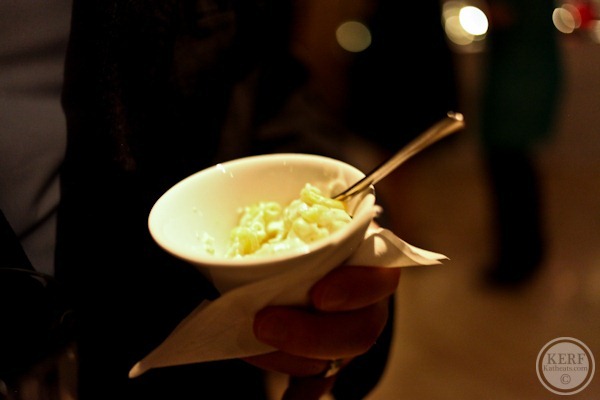 And some amazing butternut squash soup 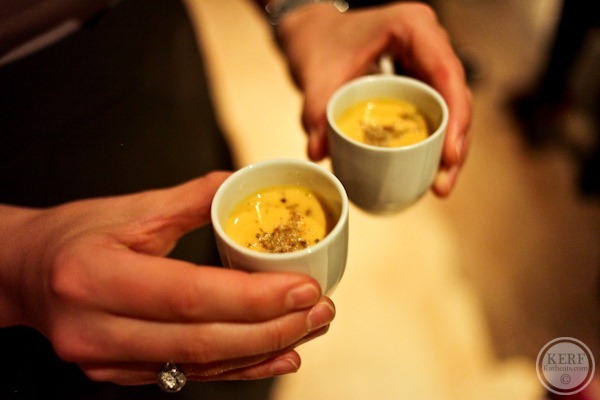 For dessert there was a candy bar, and I loved the pretzel chocolate sticks and M&Ms! M&Ms are sooo Christmas to me – my grandmother Younger always had a bowl of them for munching at Christmastime! 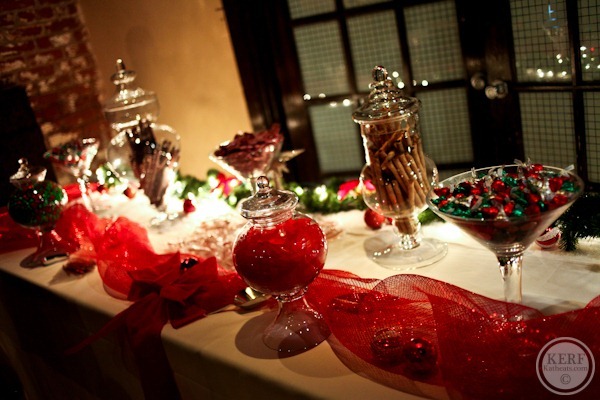 Unfortunately our evening was cut a little short when Mazen decided to refuse his bottle. We rushed home (thanks for the ride John!) to swoop in. He eventually calmed down and took it, but not without some serious soothing first. Poor little guy. He’s having story time with his dad now, and bedtime’s not far behind for us all.