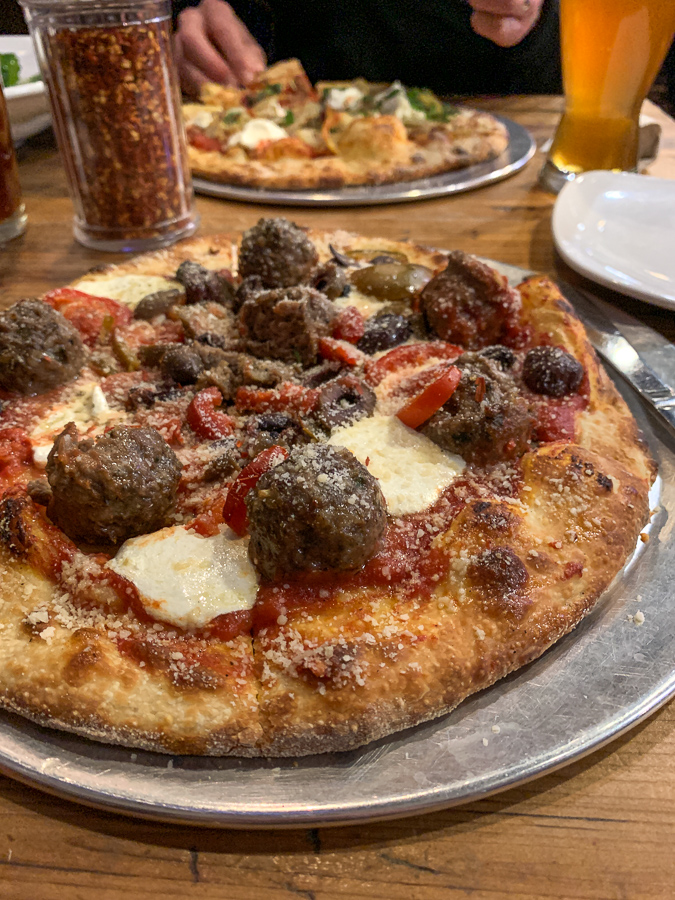 The past two weekends we’ve gone out as a family of four on Friday and then cooked in cozy on Saturday. I have no idea how long we’ll be able to swing the tradition with Birch, but for the short term it’s been really fun for Mazen! We played more Monster Mashup and have started a new dinner tradition of playing “Guess My Number.” A good math game for a kindergartener with skills of more than and less than : ) 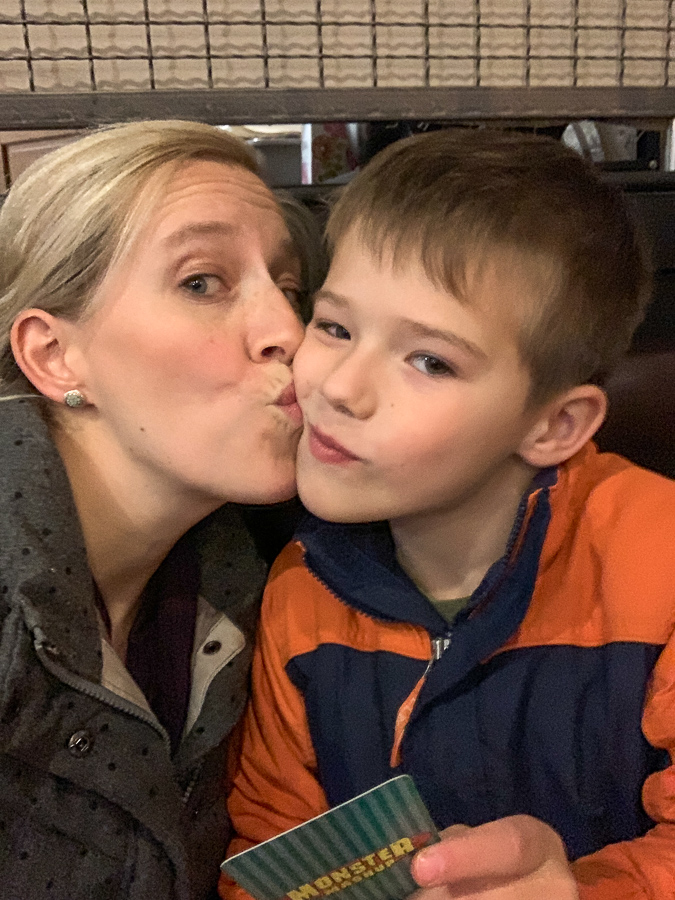 We went to Fry’s Spring Station and are two for two on great kid friendly restaurants. Thomas and I shared a sesame kale salad and two pizzas – one with fennel and lemon ricotta and the other with meatballs and spicy peppers. We brought 1/3 of the pizzas home for Saturday’s dinner. Mazen got a kids personal pizza, which came with a free dessert! We grown-ups decided we needed a dessert too, and T and I shared this banana pudding. Yum!! 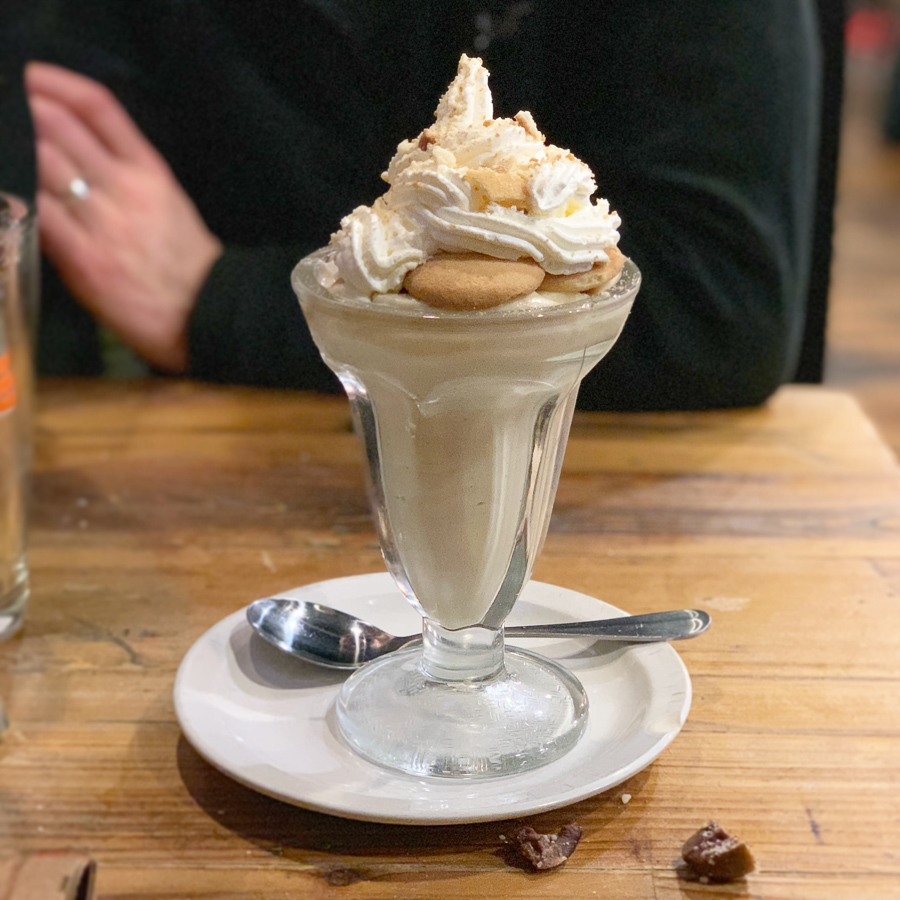 On Saturday morning I got up and out for my favorite workout class. Mazen was thrilled to get to bring his iPad to Kids Zone, so he came with me. I spent some time in the sauna after class (as if I hadn’t sweat enough!) and took a shower there since I didn’t have to rush back. It was really fun! I had the usual PB toast and coffee before and a small banana + almond butter smoothie after. Thomas and Birch were in the middle of upgrading our home security system! We’ve had the older version of Simplisafe for 4 years and I highly recommend it. You install the system yourself and it’s a lot less expensive than ADT and the like (which I had at my previous house). The brand new Simplisafe that we upgraded to is very fancy! 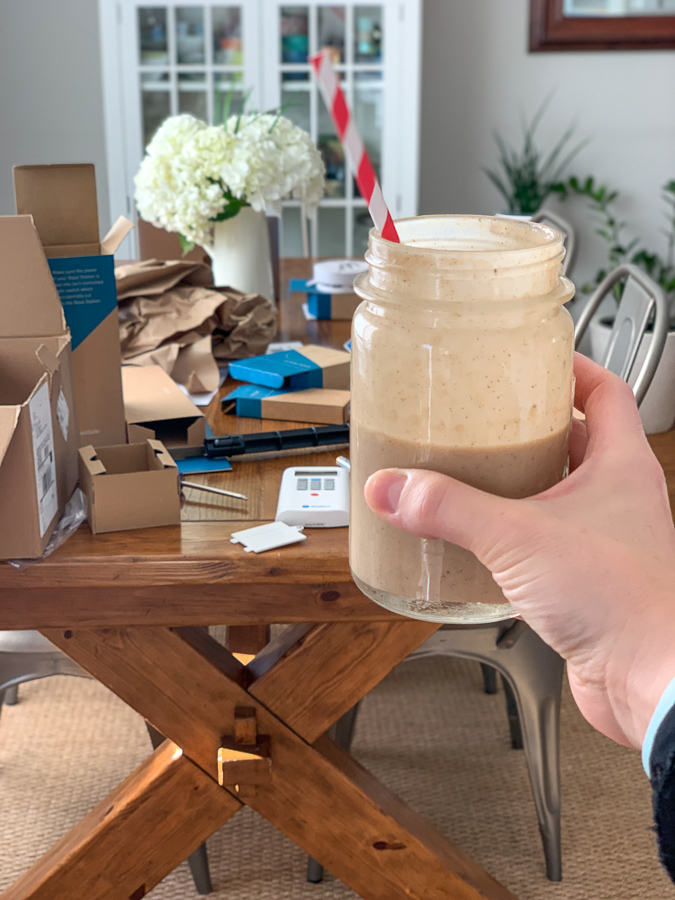 I am SO OVER the winter static! I don’t know how those of you in northern climates handle it. It’s only really bad here for a few weeks. Look at my hair just from cruisin’ across the basement carpet! 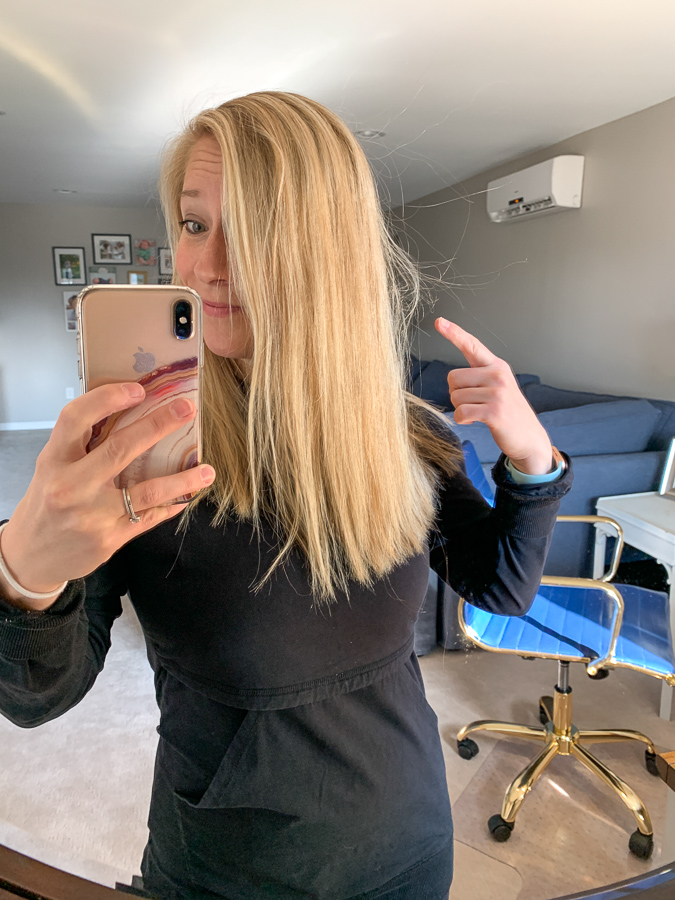 Mazey, Birch and I played a pool game with the couch cushions that involved lots of hats. 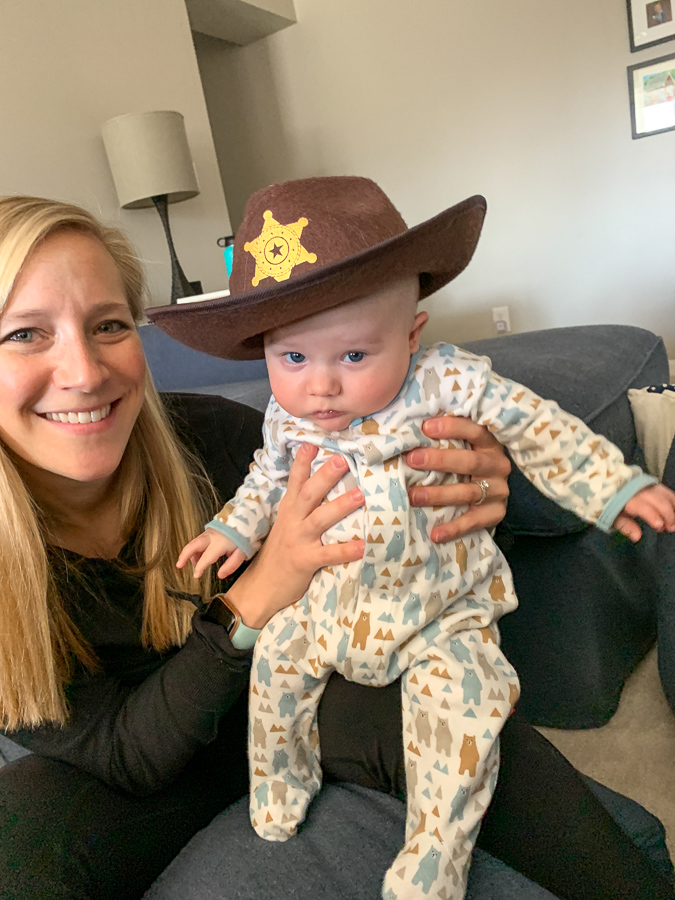 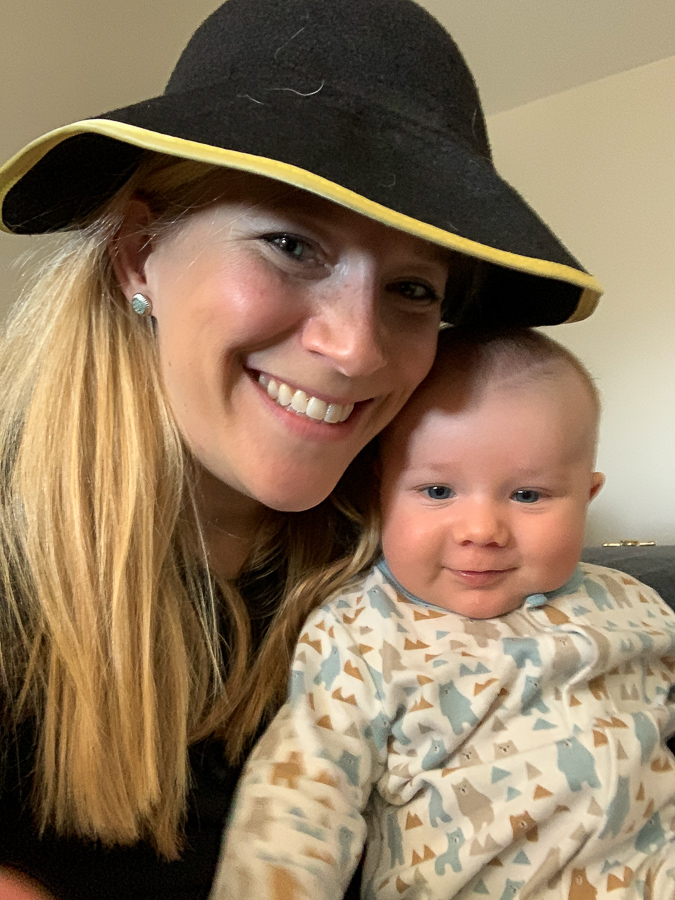 Mazen asked if he could hold Birch “like you do” so I helped him get B on his shoulder. B is about 1/4 of Mazen’s weight, so he’s pretty heavy for a 6 year old to hold already. Very sweet though. 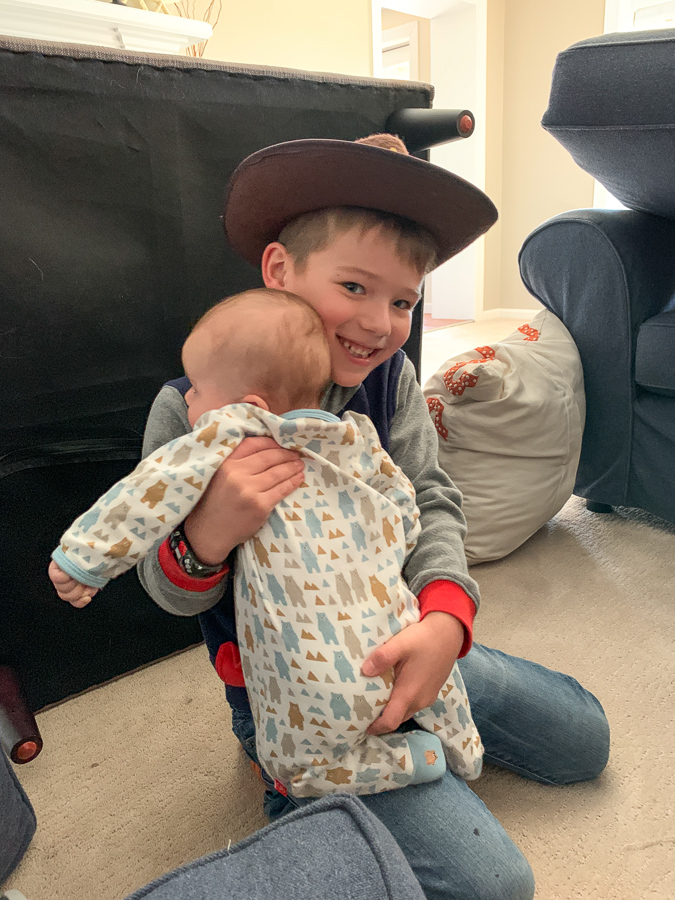 Salad with leftovers meatballs for lunch. 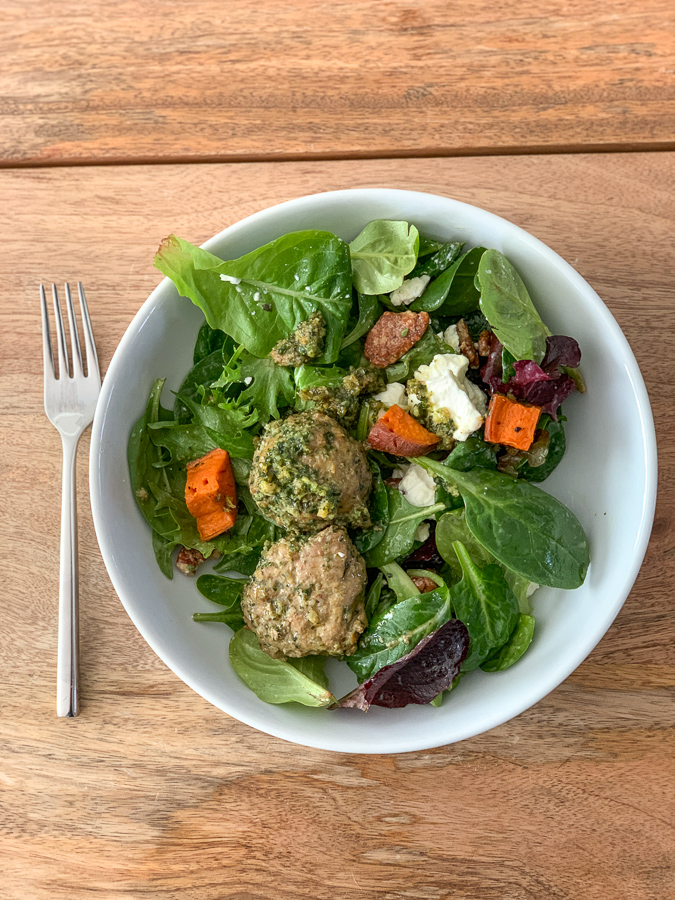 Mazen went to Matt’s for the night, and Thomas and I drove out to Bold Rock to celebrate Hillary’s baby shower! 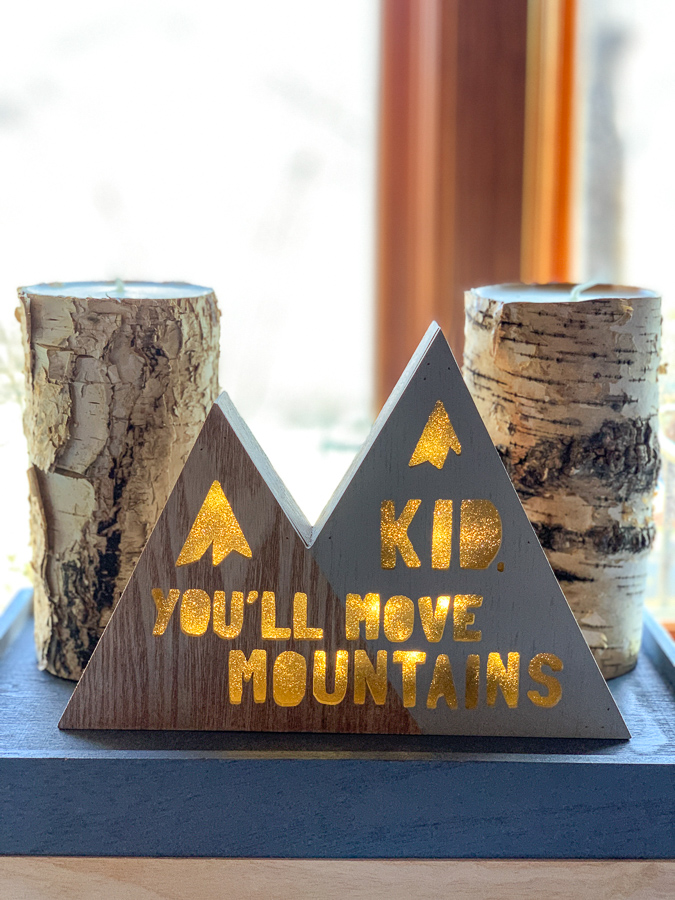 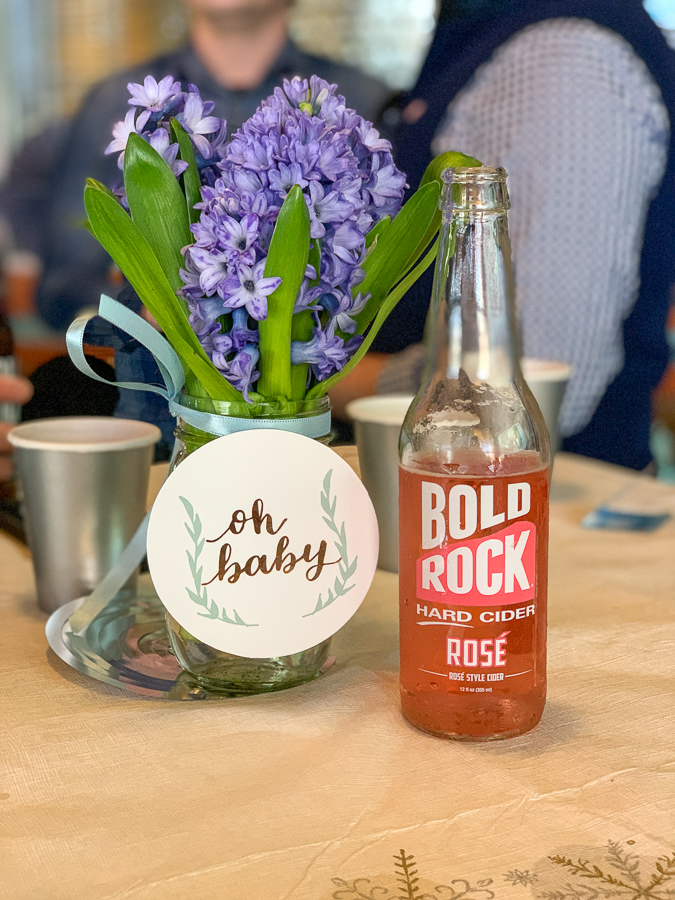 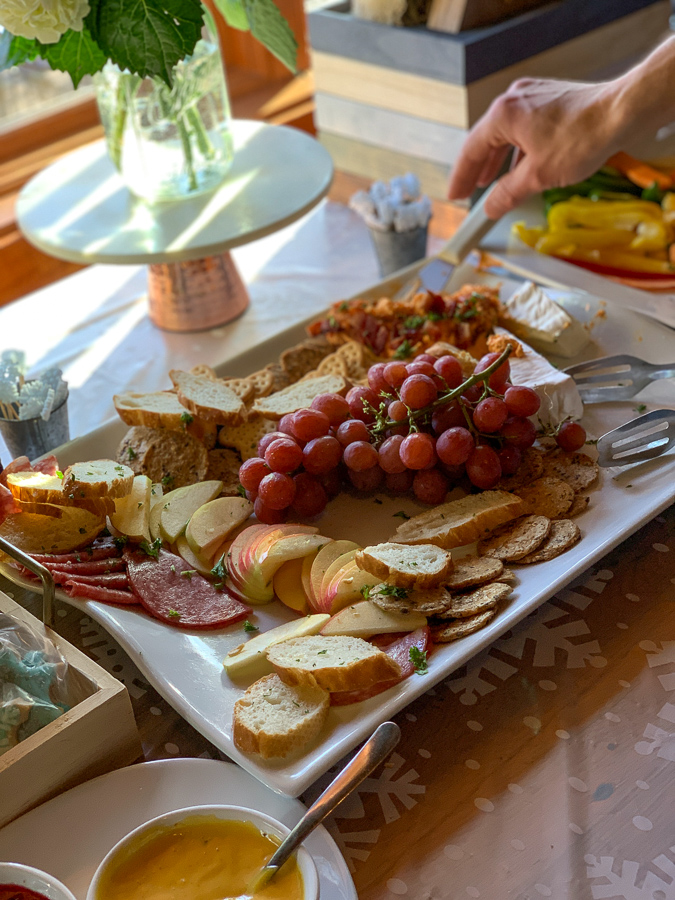 Hillary is due in just a few weeks – isn’t she glowing!? Her sister did such a great job on the winter mountain themed shower. 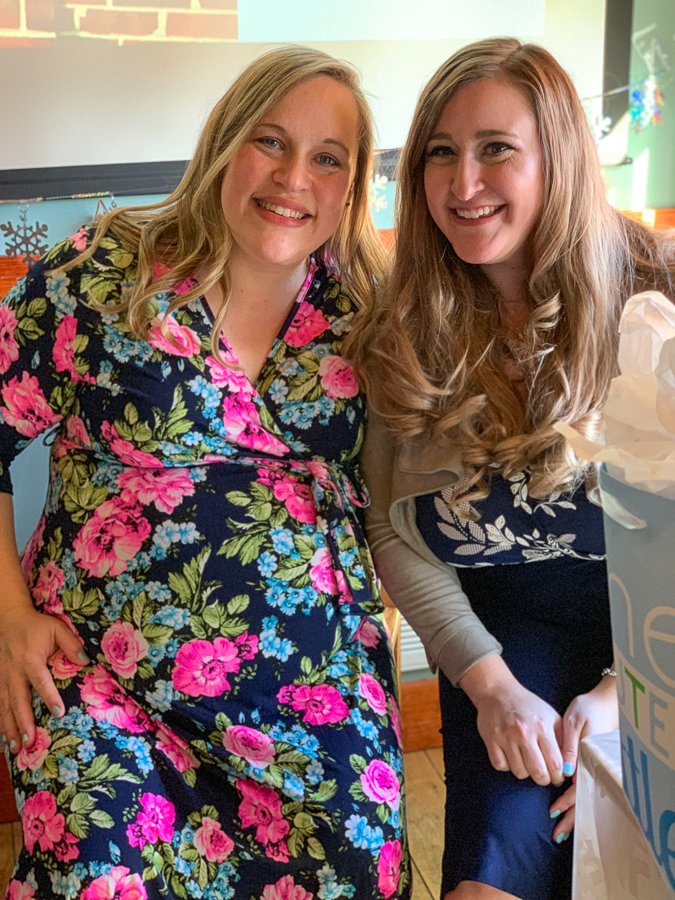 Birch did well on the long drive out, and he slept on Thomas in the Boba for the better part of the shower. He gave Baby C a birch MagneticMe sleeper just like his! 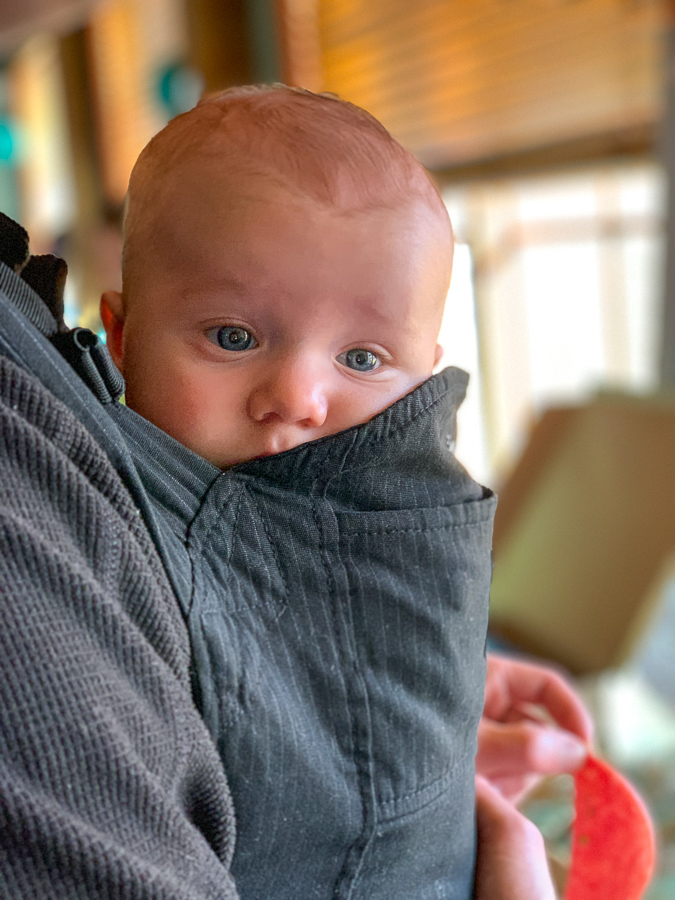 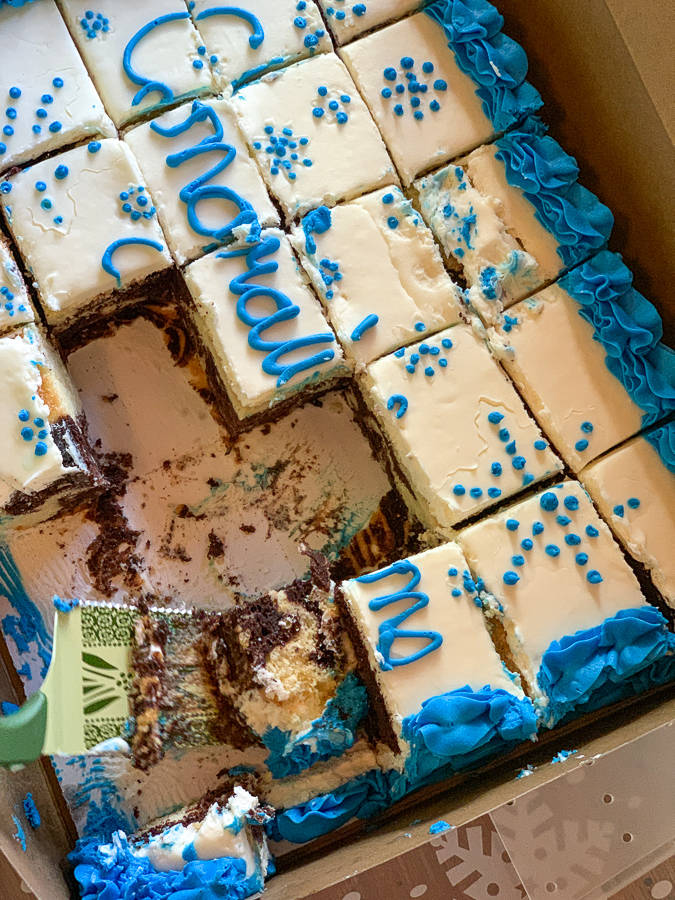 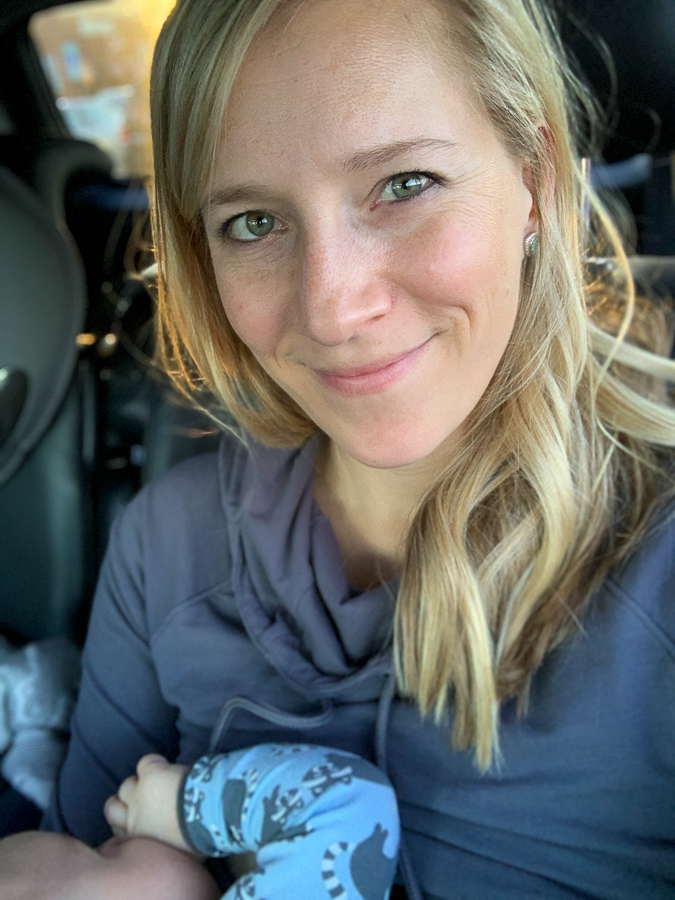 …plus a car diaper change. 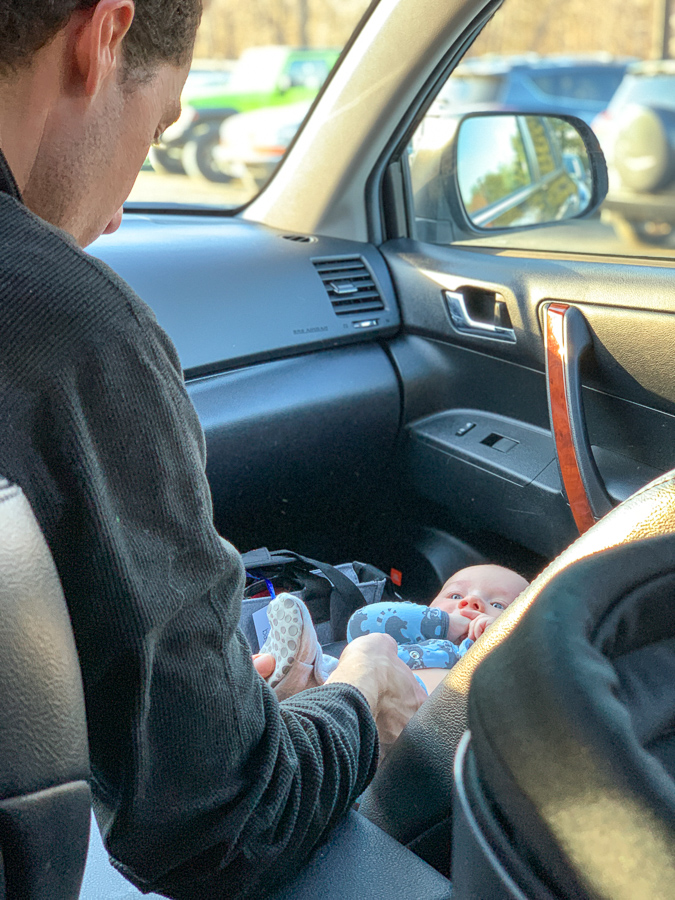 And once we were home, well after dark, we got super cozy in sweatpants and ate our leftover pizza with our newest show on Hulu – The Affair. The show is really interesting because of the way it’s filmed from two perspectives each episode. 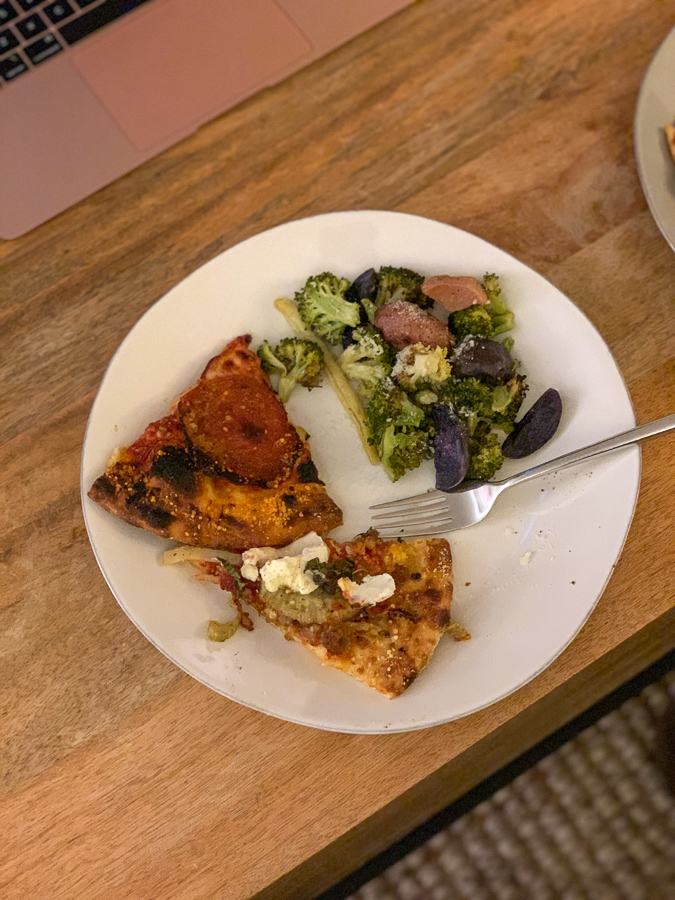 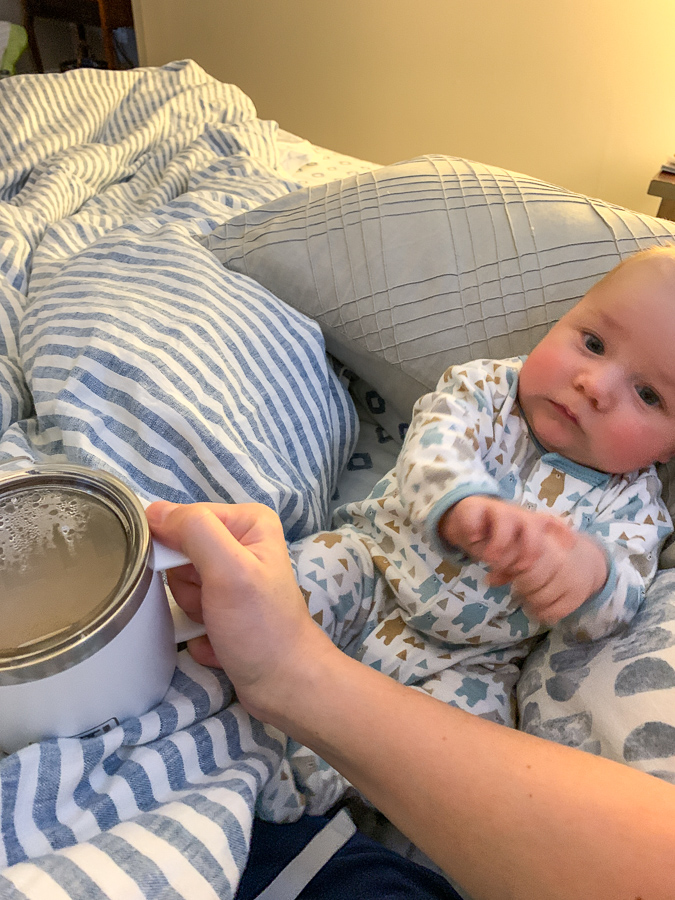 When we came down Thomas had already unloaded the dishwasher (usually my chore), made our Superbowl dip AND started breakfast!

Biscuits and bacon from J.M. Stock plus fruit and mini omelets. I’m such a lucky girl! These biscuits are amazing and are vacuum sealed and frozen, so they’re great to keep in your freezer for special occasions. 375* for 15-17 minutes in the toaster oven and you’d never know they weren’t baked that morning. 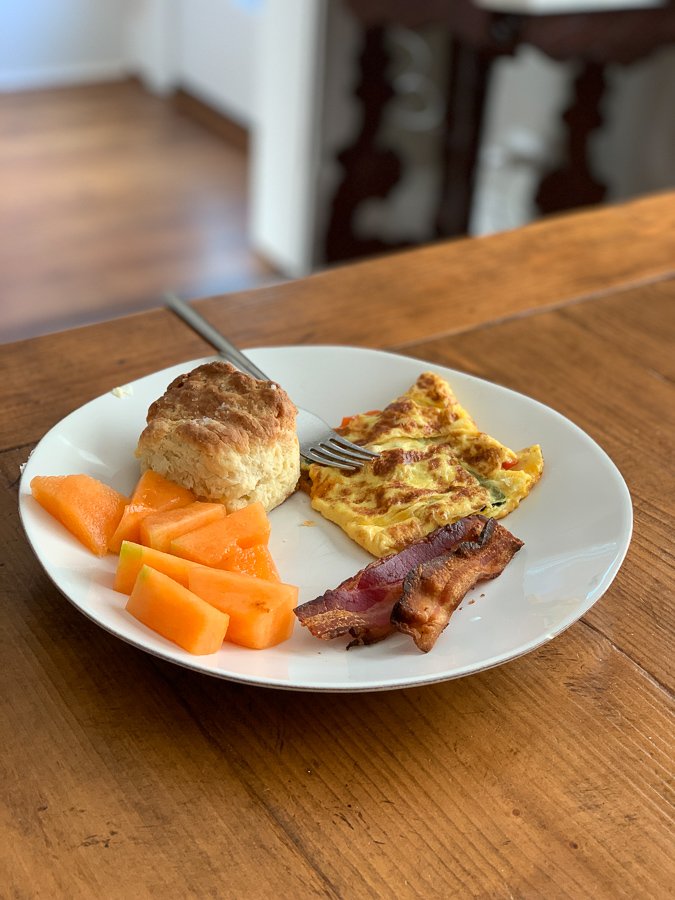 Thomas played golf on Sunday because for the first time in a while we had 60 degree temps! Birch and I went stroller walking. We’re expected to hit the upper 60s over the next few days! So very nice to get outside again.

Hope you guys had a wonderful weekend <3