You are here: Home / Charlottesville / From A To Blog 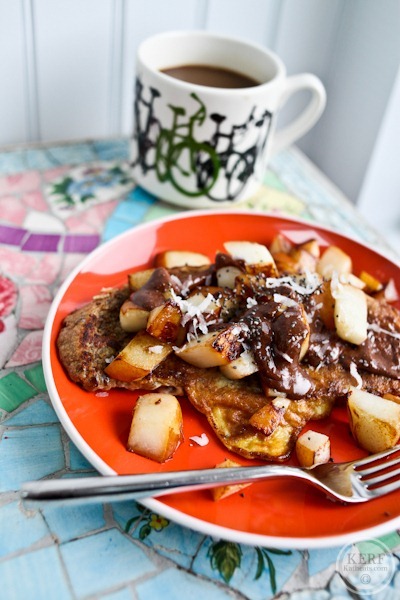 This version with Cville Crunch bread (which is 100% whole wheat with flax and walnuts – my fav) topped with seared pears, chia seeds, coconut and Justin’s Chocolate Almond Butter. 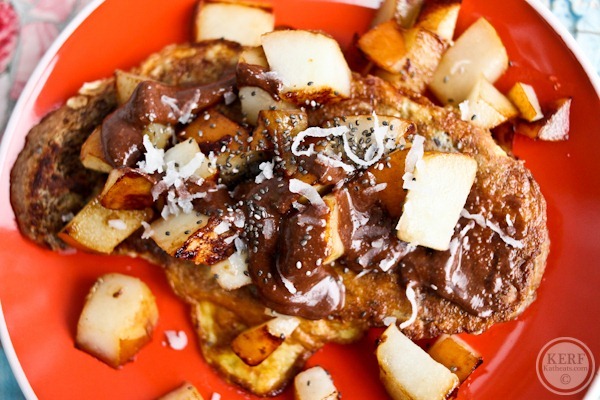 Almost too decadent with all that chocolaty taste! 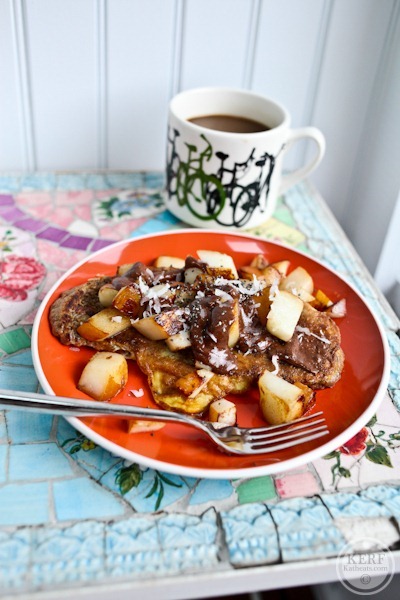 Matt and I had to record commercials for the radio again (one of our most fun business meetings!) so we treated ourselves to lunch after. 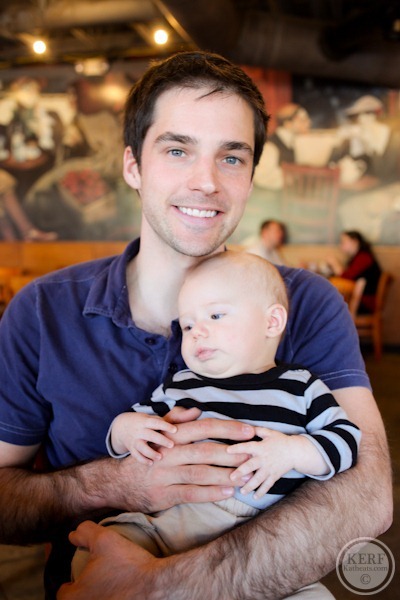 Our neighbor owns a lunch spot called Zazus, so we headed to that side of town to try it out. 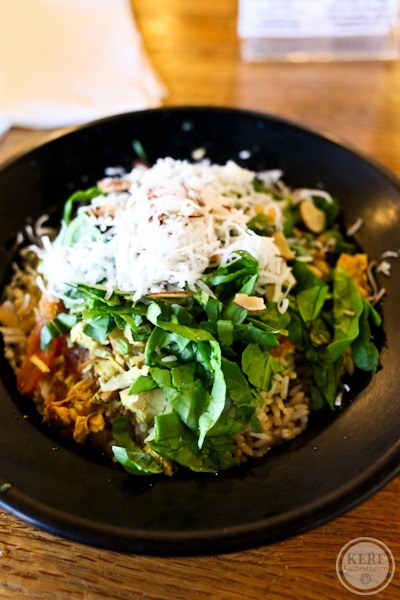 I had the chicken curry bowl that came with rice, chicken curry, lettuce, almonds and COCONUT! (That looks like cheese on top, but it’s coconut). Made the dish! 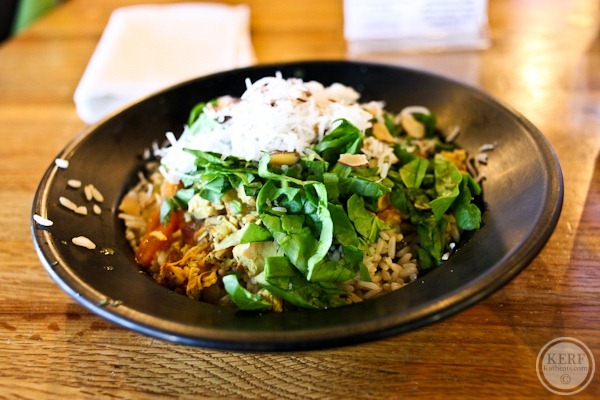 Matt and I also shared some chips. His tilapia wrap was quite good too. 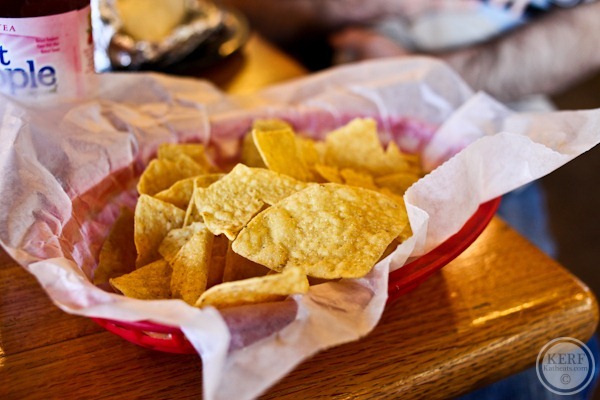 Afterwards we went next door to the best coffee shop in the world: Shenandoah Joe. 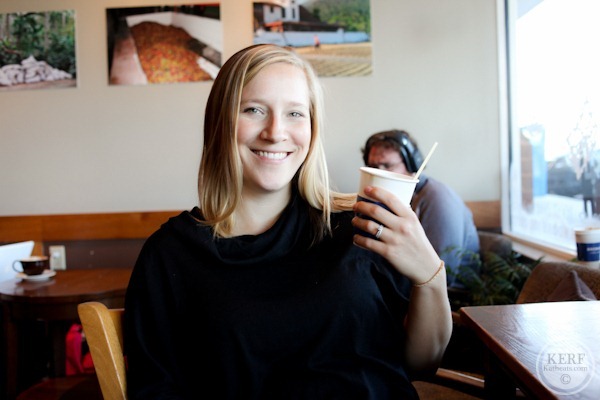 I was thinking while I sipped my decaf cappuccino that SJ’s coffee really is the BEST I have tasted worldwide – including some of the fancy places in San Francisco and Chicago. 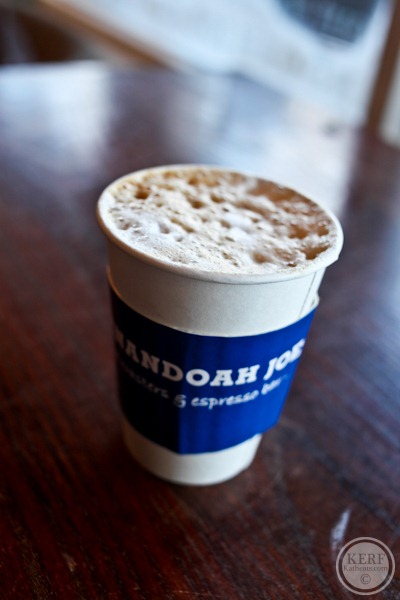 I wouldn’t necessarily say it’s better than those places, but it’s on par – delicious coffee. I drink their Ethiopian Decaf every day (best decaf I’ve ever had for sure), and we love the owner Dave! 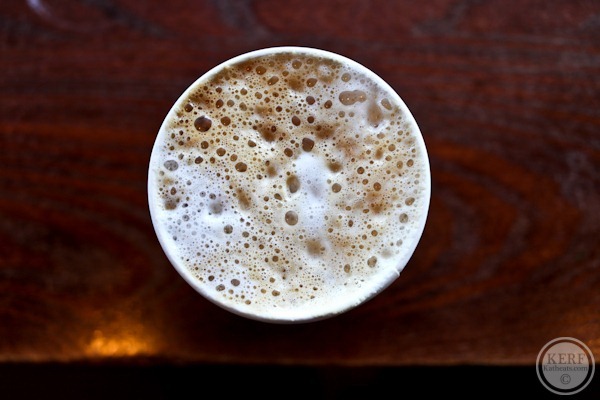 After our coffees, we went home to chill for a bit. Matt is taking one afternoon off during the week for family time to make up for missed Saturday mornings together, and this was it! 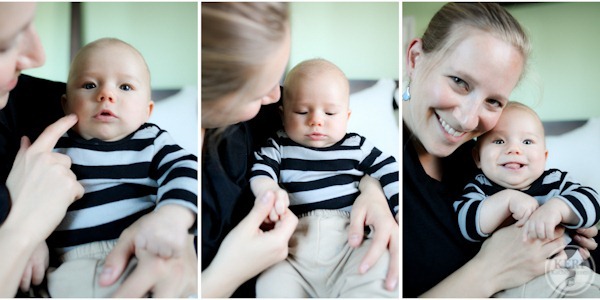 Then, we went RUNNING! I haven’t been on nearly the amount of runs that I would like lately. Being home alone, it’s just easier to take him to the gym than it is to coordinate running outdoors. But today Matt and I traded spaces – me first, him second. Mazen slept for a long nap while I was gone.

My run was awesome. Despite not running in a while, my legs remembered what to do and I have shaved a whole minute off my pace from my first couple of runs*. 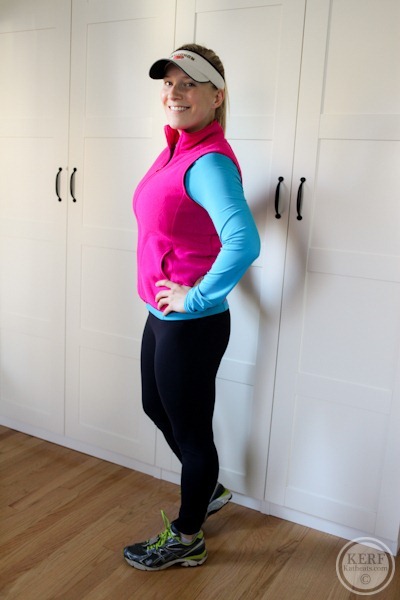 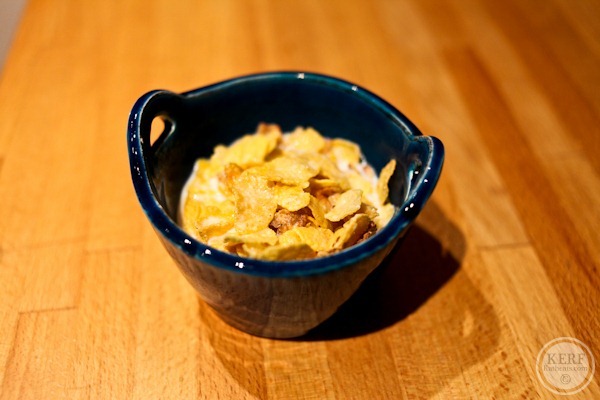 For dinner, Hillary came over for a weeknight feast! 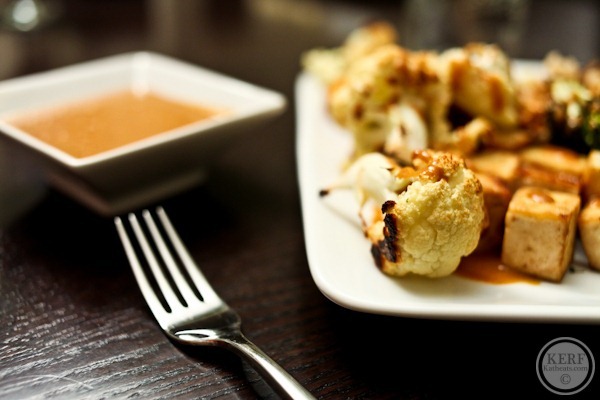 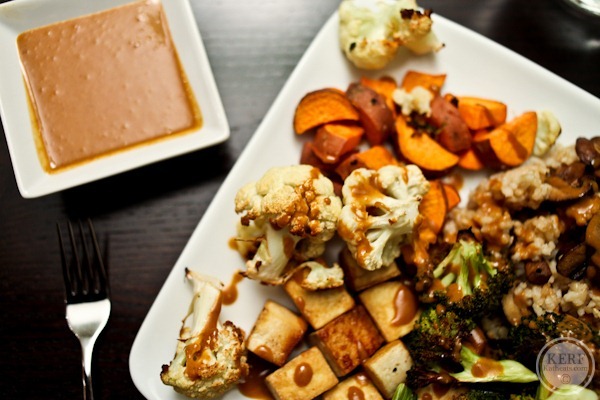 The meal we created we absolutely divine! 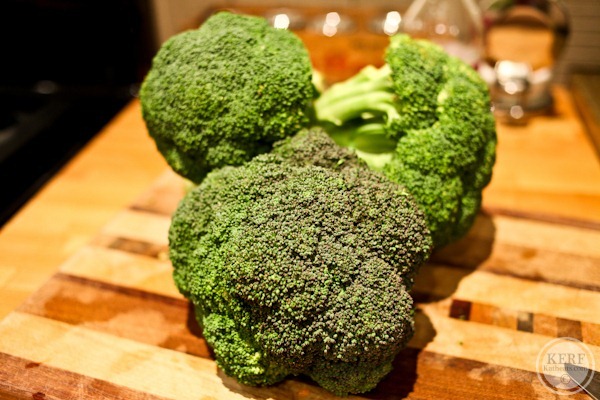 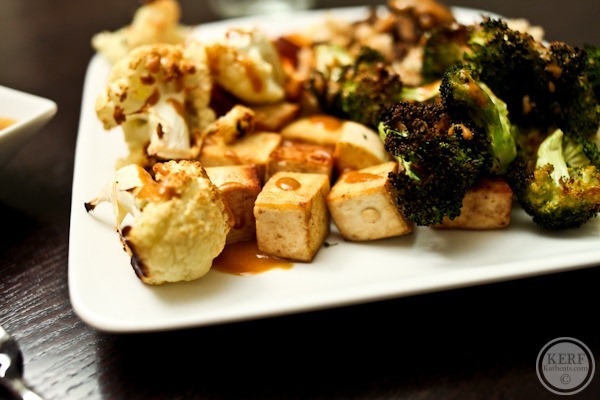 A TON of roasted broccoli + cauliflower plus sweet potatoes! 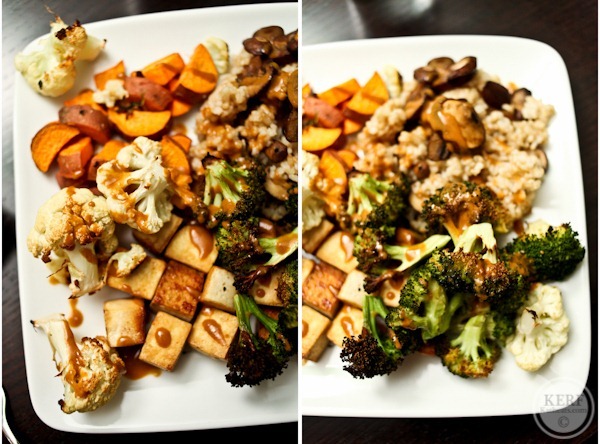 Rice + sautéed mushrooms, all coasted in a wonderful peanut sauce. 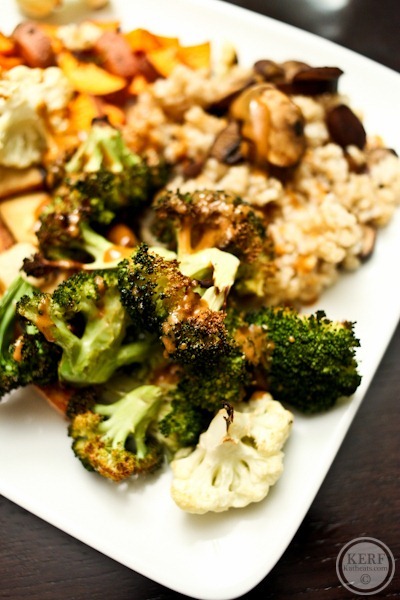 Hillary was in charge of the sauce and said she might share the rough recipe in the comments. It was a mix of PB2, tamari, sriracha, brown sugar, and peanut butter, at least! 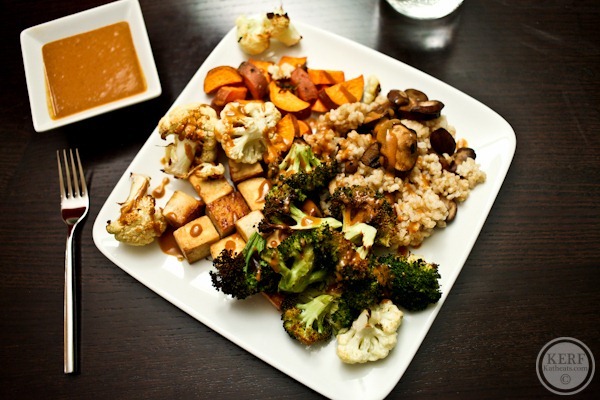 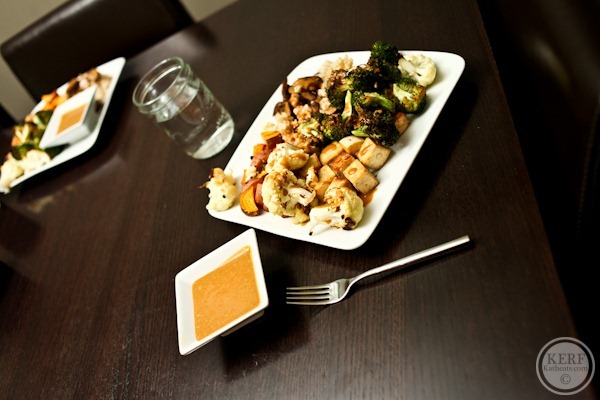 Having company over called for a little dessert (I admit I really need to cut back on the weeknight desserts….!!) so we pulled out a slice of Larbs’s  birthday cake from the freezer!! She saved this for me and had it hand delivered by mom on a trip in November. It was an incredible cake from her favorite bakery, and of course the frosting was the highlight.

A sliver for each of us was the perfect ending to a fun dinner. 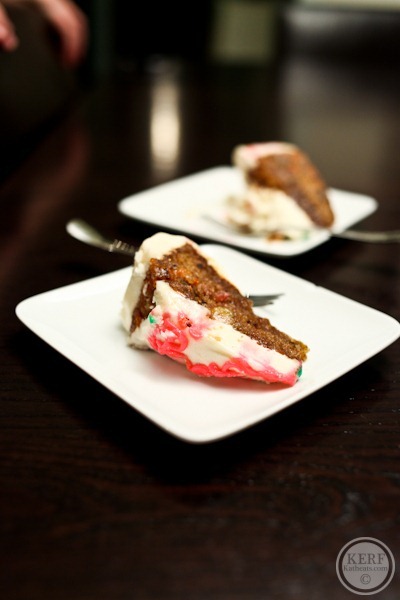