I spent the afternoon assembling our Christmas cards. I mostly just do them because I love receiving them and want to share the fun of getting a hand-addressed card in the mail. Too bad the inside of ours were done on a printer 🙂

Karen brought over a plate of goodies her friend baked. I had a bite of one of the scones for a snack around 5:00. Lunch was holding me over well! The rest are on top of our fridge. Wait – don’t remind me of that now that it’s late at night!!

We weren’t due to our party until 7:30. I had planned to have a yogurt + a salad for a light dinner but wasn’t that hungry. But around 6:30 I figured I should have a little something so I just has some Kashi GoLean Crunch, Puffins, soy milk + a tiny bit of Barney Butter. 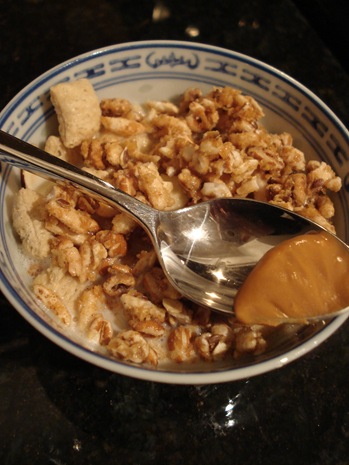 My friend Ellen hosted a Christmas Reject Party at her house for a bunch of friends and neighbors. I LOVE PARTIES!!! We had a ton of fun 😎  (Note my Hello Dollies on the edge there!) 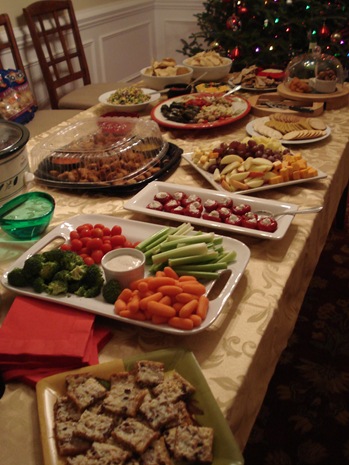 I started by sharing a Blue Moon with the husband. He got 2/3. 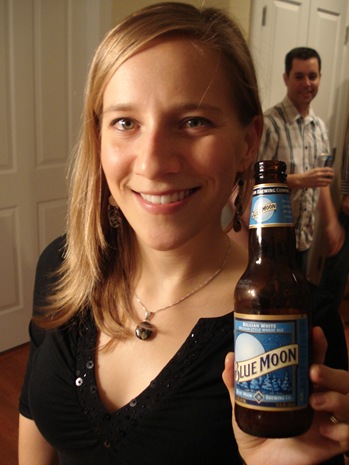 Followed by half a New Castle – a favorite beer of mine! 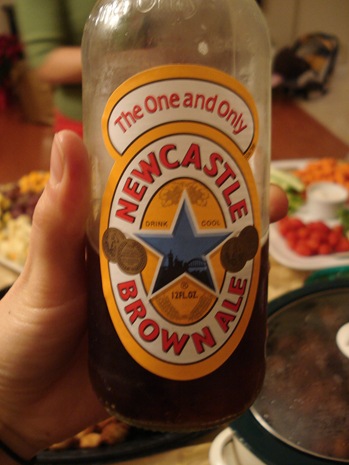 And some fooooood! I filled most of my plate with fruits and veggies complemented with a grapeleaf, pitas, a stuffed pepper, a nugget, a meatball and some cheese. 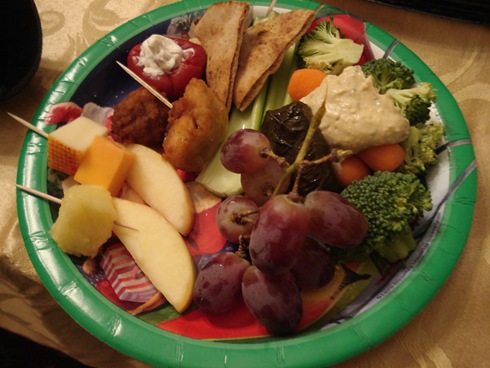 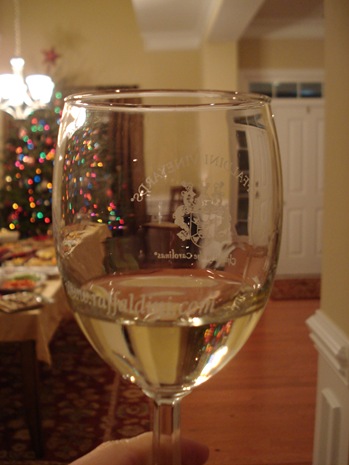 Followed by another meat ball, some blue cheese, a cracker and a few more grapes!

Followed by dessert!! I had a small cookie, a Hello Dolly and split a Cheesecake Shot (non-alcoholic – just cheesecake topped with butterscotch in a shot glass – A.mazing!) with the husband. I wanted a second but decided I’d had enough. 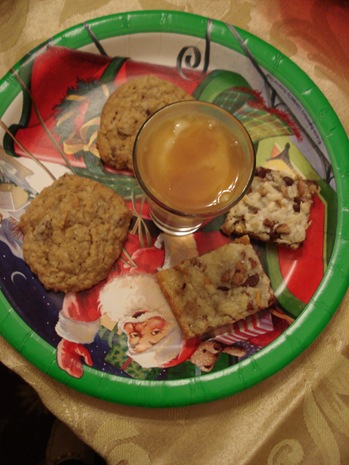 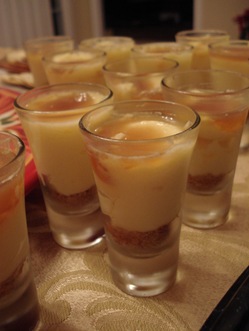 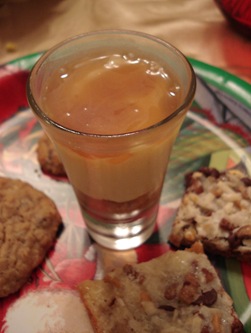 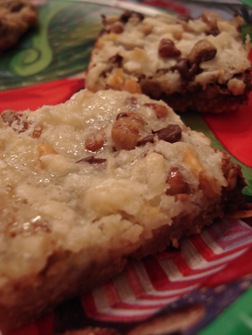 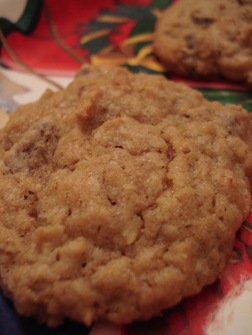 Some red – plus a sip of Kelsey’s magical Limoncello Vodka Lemonade! 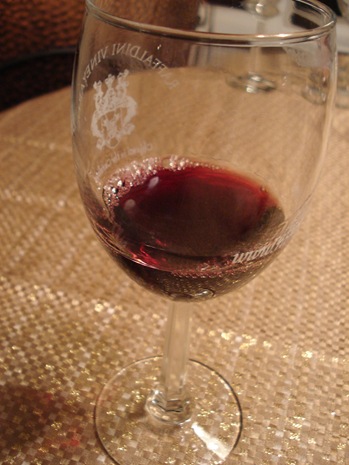 We played the Dirty Santa game where you steal presents. I brought a package of VitaMuffin mix that had been in my pantry for over a year. Don’t think I’ll be making it! Anytime I get a baking craving I want to make something from scratch. We ended up with this DVD. 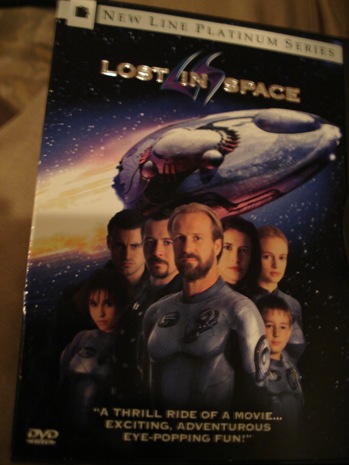 And someone got someone’s edible undies!! Ewwww!! But of course being a festive group we had to taste them. My friends told me if I ate it I had to put it on the blog, so here’s my bite!!!! It was quite disguesting and tasted like plastic. 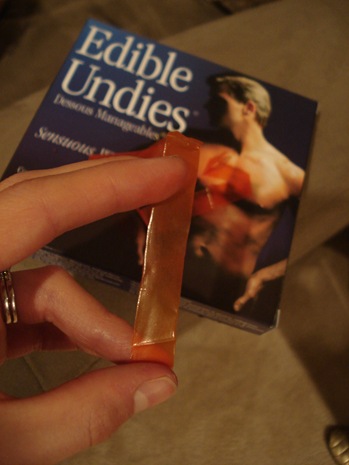 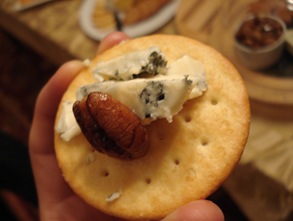 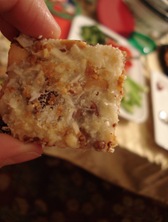 I may have had another cookie half too! And perhaps another piece of blue cheese. It was getting tough to record them all! 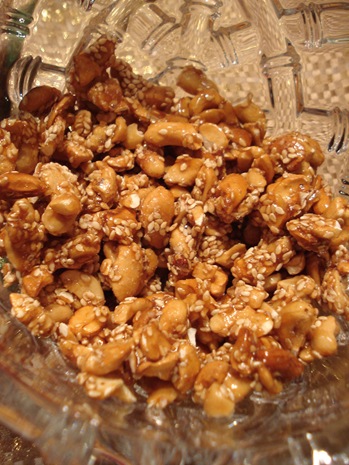 I’m home and very pleased that I didn’t over-drink tonight. I know I’ll feel OK come morning. The key tonight was sipping instead of gulping (and perhaps starting with a beer that slowed me down). I’m sure I over-ate calorie-wise, but that’s all part of the ebb and flow of the Squiggly Line Effect of maintenance. I am rather thirsty though!

The husband has requested sleeping in tomorrow (he’s been up for 21 hours!) instead of working out in the morning, so of course he needs to sleep! He’s due at work around 11 am. I’m already looking forward to a leisurely morning beginning with some fresh oats 🙂