You are here: Home / Lifestyle / Evolution of a Meal 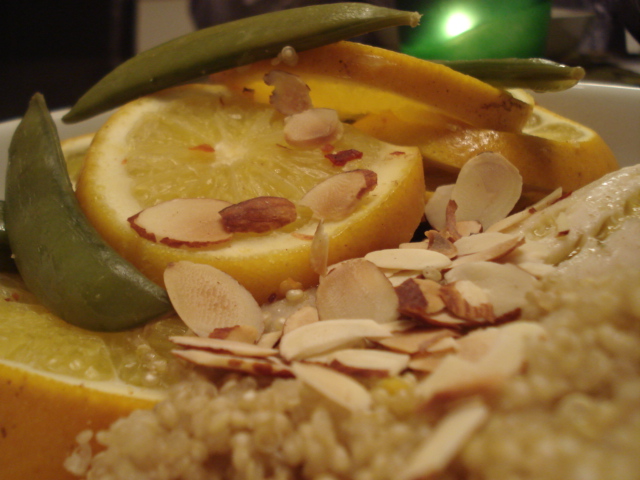 This recipe was born last week when we decided we hadn’t had sugar-snap peas in a while.

We needed something cheap to go with them: frozen tilapia. And that was that.

Then we got 5 oranges from the husband’s grandmother. It was decided that oranges would be involved in this meal.

Then on Sunday, I went to Harris Teeter and discovered we had qualified for a big wok (some customer appreciation thing). Well, we already have a wok, but this one was advertised as a steaming wok, and since we don’t have any kind of steaming equipment, I decided to bring it home and take it to Good Will if necessary. It was determined that the sugar-snap/tilapia/orange meal would be a good candidate to test the wok.

This afternoon I was thinking about dinner and realized the calories only totaled 158 per serving! Perhaps a grain was in store. Pasta? Rice? I needed something different. Quinoa – now that’s a grain we haven’t had in a while!

During the last minute of cooking, I thought we needed something crunchy. Or, inspired by my Dr. Weil book, some olive oil. It was declared that we would drizzle the EVOO on top for maximum flavor (1/2 a tsp) and toast some sliced almonds for a healthy crunch.

And the recipe was complete.

First we got the water simmering on the bottom layer. Then we laid the sugar-snaps across the bottom. Next we layered on some of the oranges. Down went the fish, with its marinade to incorporate with the steaming liquid. Topped with more orange zest and red pepper flakes. 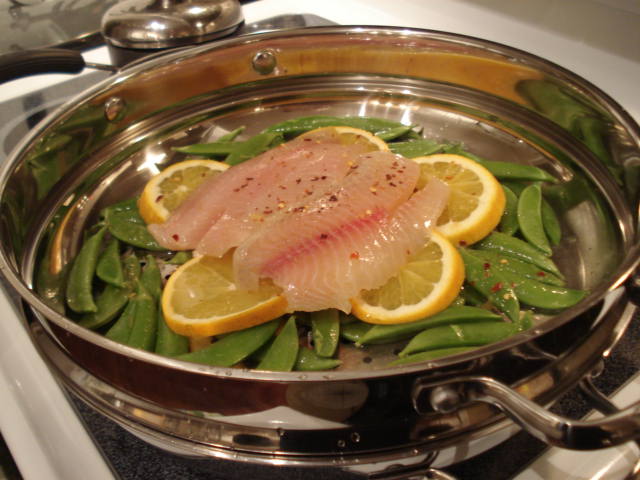 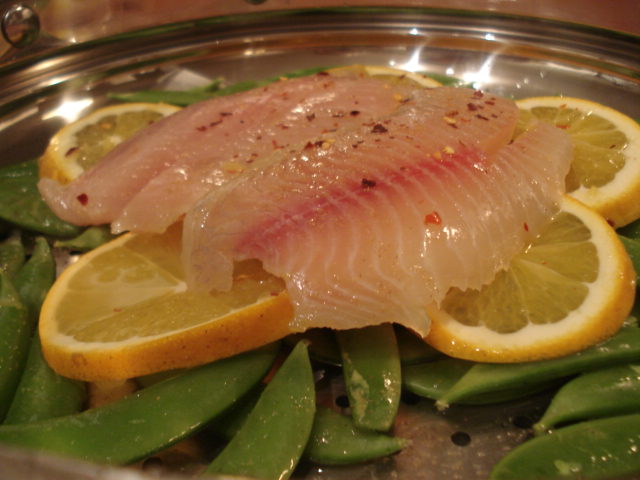 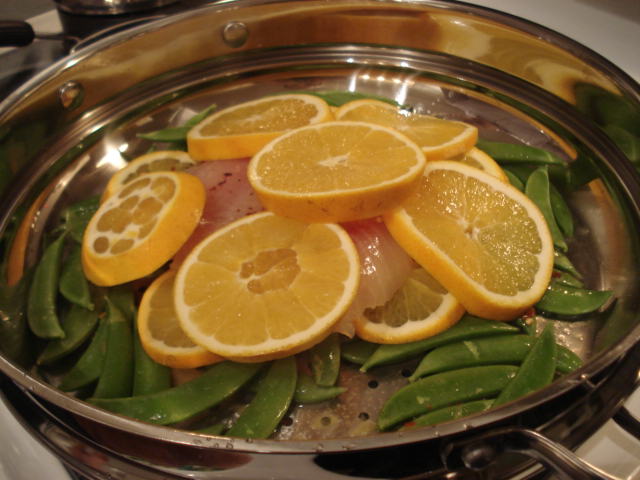 Layer quinoa, fish, peas and oranges in a bowl. Drizzle with EVOO. Sprinkle with toasted almonds. 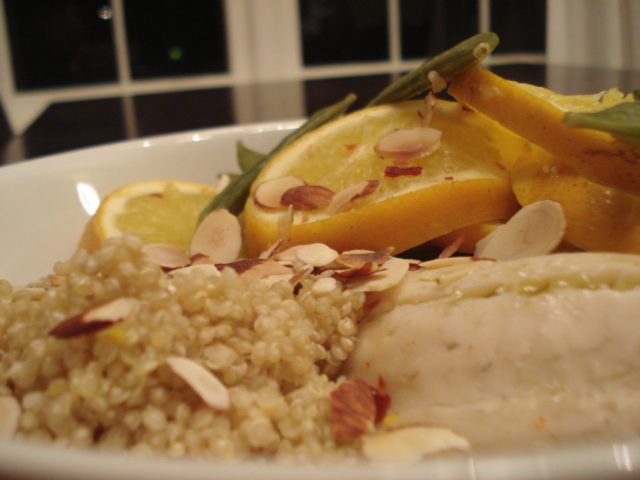 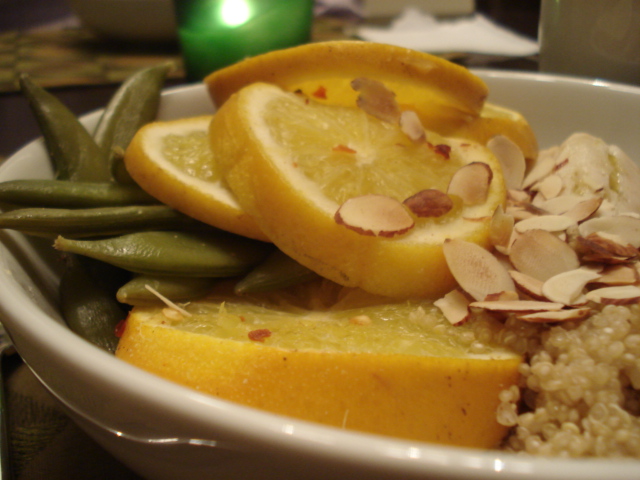 With the quinoa, EVOO and almonds, dinner calories = 400. 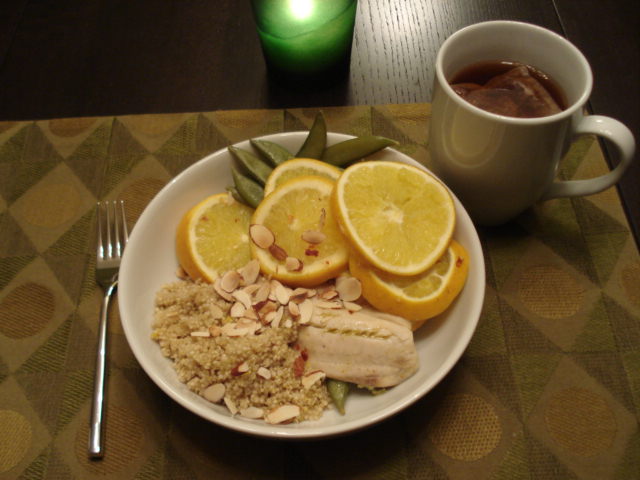 Unlike yesterday, my lunch didn’t hold me over very well 🙁 I wanted something warm, yet crunchy around 3:30. I had this packet of dried apple chips in my cabinet for the longest time, so I combined that with half a Kashi Crunchy Pumpkin Spice Flax bar with 1/4 a cup of prepared oatmeal. It left me craving more food, but after a good 30 minutes of food torture, fullness finally settled in. Oatmeal in the afternoon does that to me occasionally – just makes me want to keep chewing. So strange, as it’s not every time. Must be something on the palate. 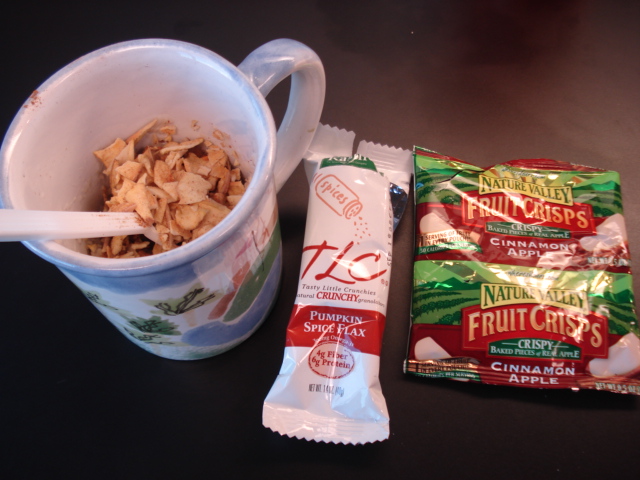 I compulsively ate a bite of fudge and half a chocolate-covered wafer in the kitchen. I didn’t have my camera with me, so I just ate them. But I did log them – ~60 kcal.

Check out my cute husband with his new license plate – it’s sponsored by our college, Davidson, which has quite a studious reputation 🙂 P.S. If you’re going to steal his identity with this, I recommend that you don’t or you will be electronically banned from the blog! 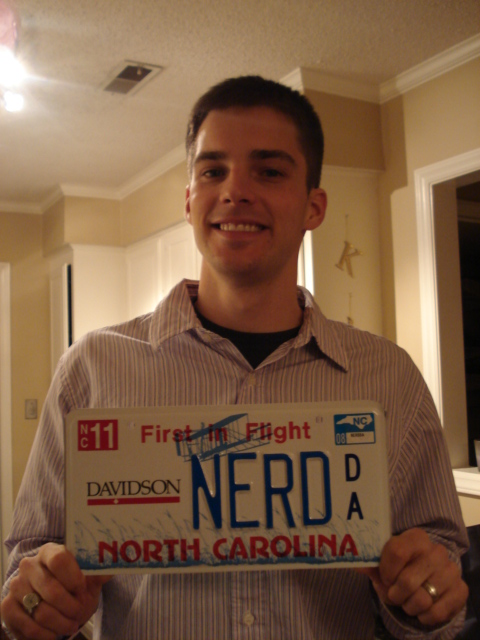 I’d really like dessert but I think I’d be better off reading in bed. This meal left me feeling healthy and fresh and I’d like to keep the feeling for as long as I can!

I was hungry at 8:30 and had a small bowl of Fiber One, Great Grains and soy milk.  I don’t think the quinoa was very filling despite being 170 kcal. So I needed some more grains! This was one of those times when hunger overrides calories and I ate for more fuel. 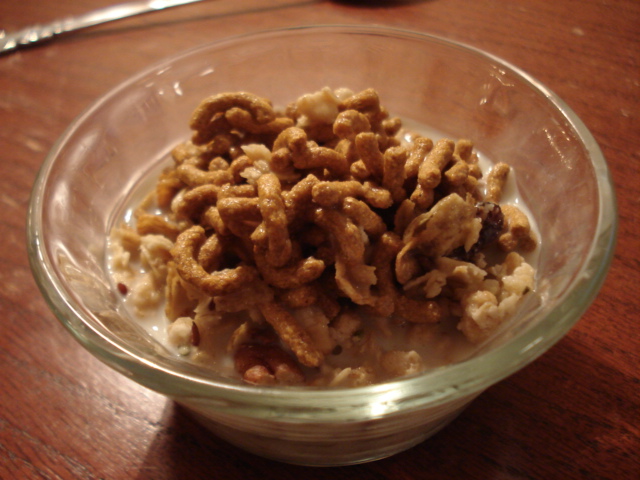