This afternoon I worked on my project while I snacked on a granola bar homemade by Emily‘s husband Casey! From the sound of it, he mushed together several cereals, dried fruit, peanut butter (or PB2?) and some binders and baked them. It was GREAT! A little sweet for my palate, but great chew and filling! Go hound Emily for the recipe 😉 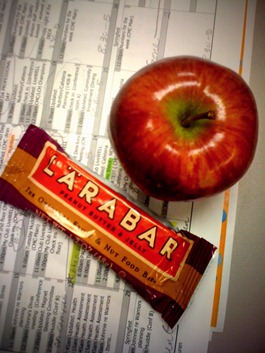 Once home I set out on two massive projects:

1) 3 giant loads of laundry (being kicked out of the house postponed my weekend loads!) 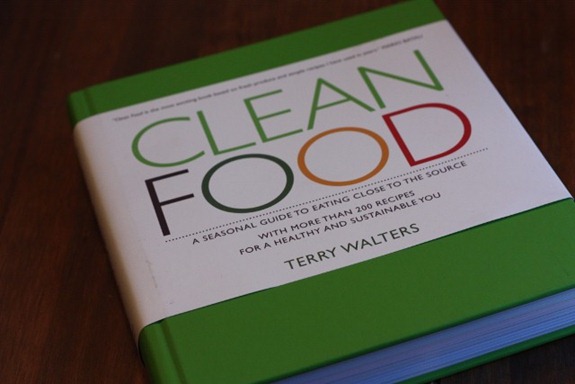 I was recently sent the cookbook for review! I don’t accept many cookbooks, but having seen this on several blogs I knew it jived with my style. LOVE that it is organized by season. Totally convenient. And it features all my favorite foods!! Some of the ingredients are kind of weird, but I think most of the weird ones are kind of optional.

Kombu, for example (go to Ashley‘s recipe page for more info on kombu! I had never heard of it until she used it) 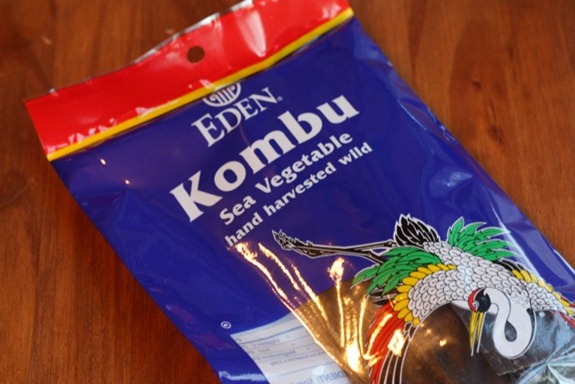 So I turned straight to the recipe that drew me to the cookbook: Lentil Apple Walnut Loaf. 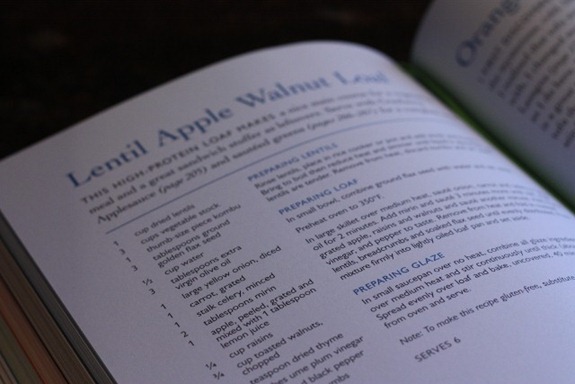 And lucky for y’all, the publisher send me a copy to share with you all!! 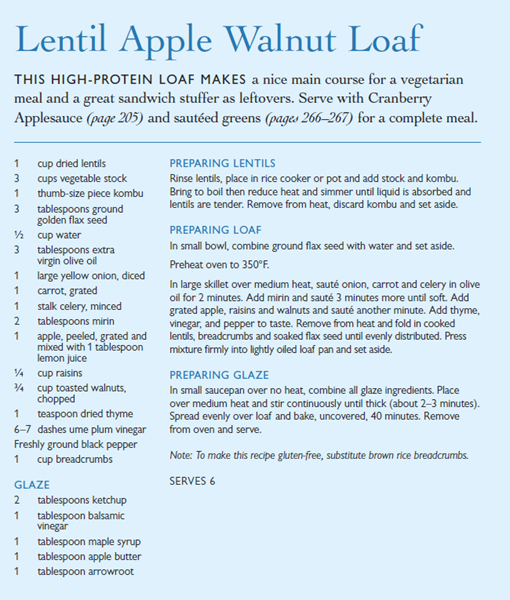 The only con to this recipe is it’s rather hands-on. And involves cooking lentils before you even start!! I was actually planning to make this last night for Karen until I realized I would need a good 2 hours. So I went ahead and prepared the lentils last night so I could save time tonight 🙂 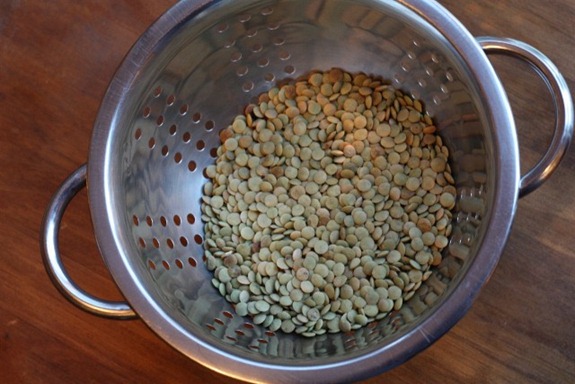 I found the kombu at EarthFare. It was SIX DOLLARS but I decided to give it a try. And like Ashley says, it will last a while. I do think it added a lot of flavor to the lentils! It’s very salty and not very fishy, so I think you all will like it. 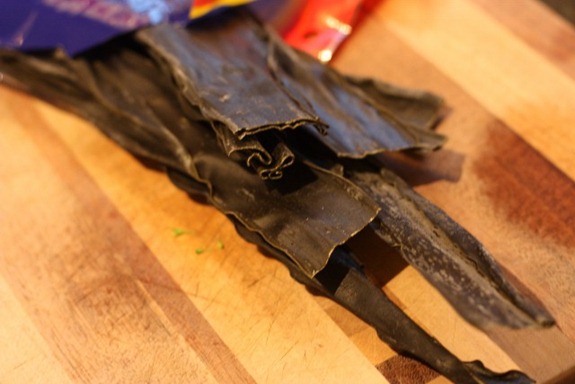 So the recipe called for onion, celery and carrot. I only had carrot and red bell pepper, so that’s what I made instead. I also was too lazy to clean the grater or Cuisinart so I just minced the apple. And I did not peel it because I don’t peel things out of laziness either! 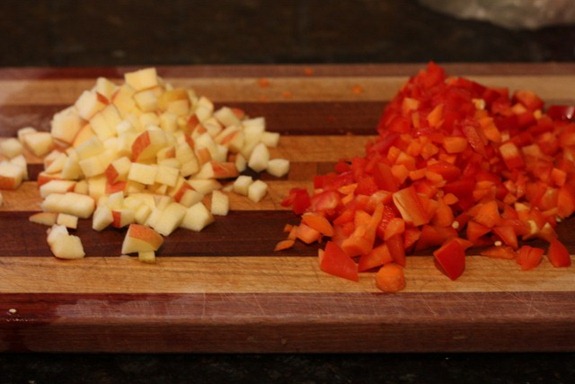 But DOH – I had to use the Cuisnart to make the breadcrumbs (Great Harvest bread!!) so I could have grated after all! 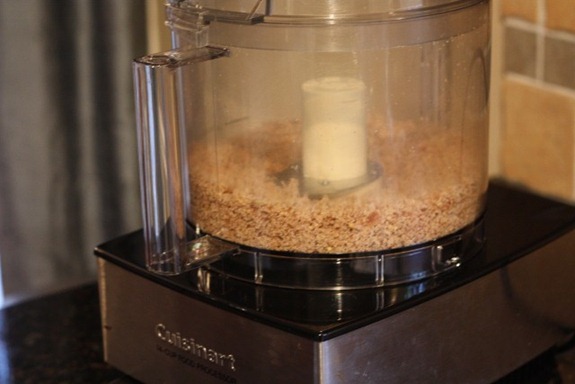 I didn’t have plum vinegar so I just used balsamic, and I also used this basil + oregano flavored rice vinegar Nakano sent me a while back. It served a perfect purpose tonight!

I never would have thought to add vinegar to a saute (I’m not a huge vinegar fan in cooking) but the aromatic on this was awesome!! 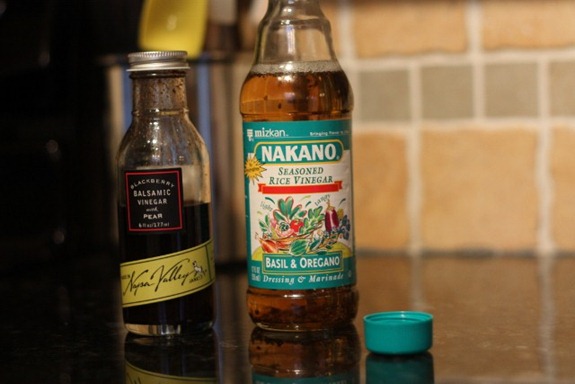 So what DUMMY do you think packed up her loaf pan months before moving out of her house?

Improvise with a muffin tin!! 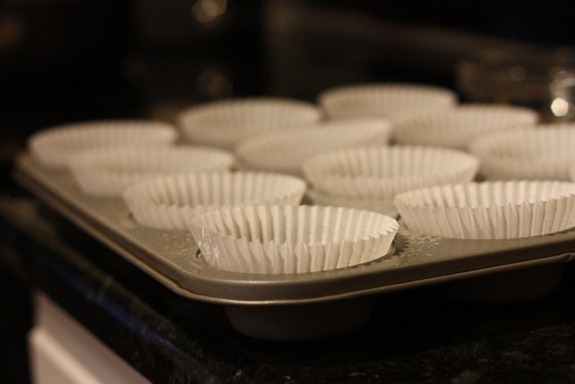 The GLAZE!!!!!!!!!!!!! SO SO good!!! Next time I would DOUBLE THE GLAZE because there needed to be more!! (I also realized I didn’t have arrowroot or cornstarch, so I just added a bit more ketchup to thicken it on the stovetop) 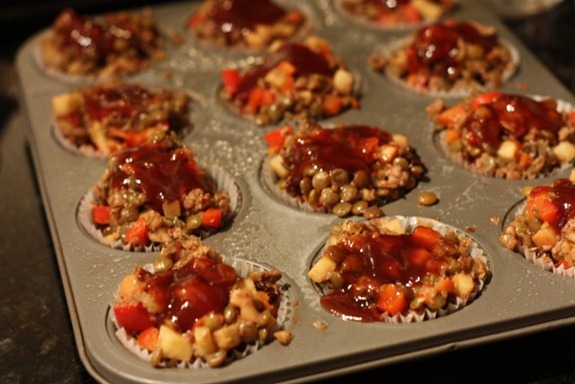 I reduced cooking to 30 minutes because of my muffin tin…. 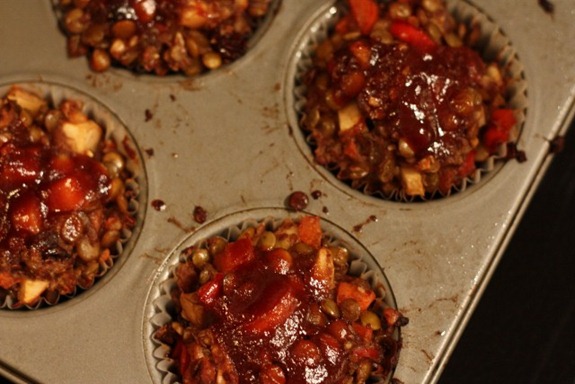 SO glad I did the muffin tin!! Muffins are so much more fun than loaves! 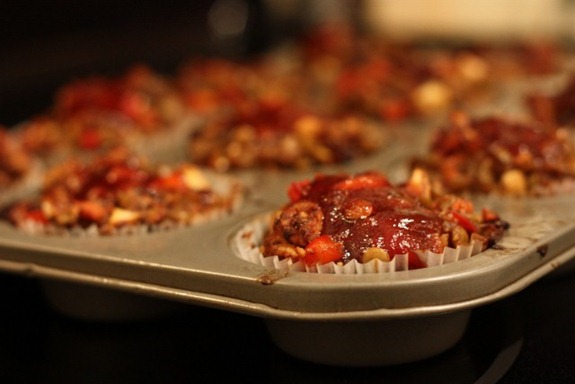 While the oven was hot, I roasted up a bunch of veggies I had intended to roast on Sunday. 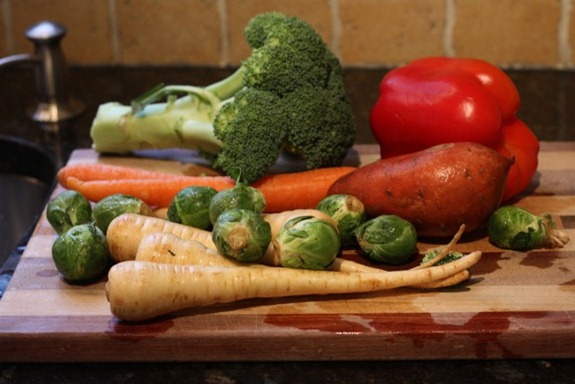 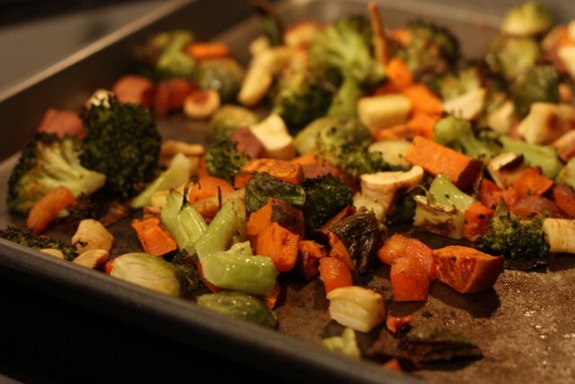 WOW this was so gooooood!!! 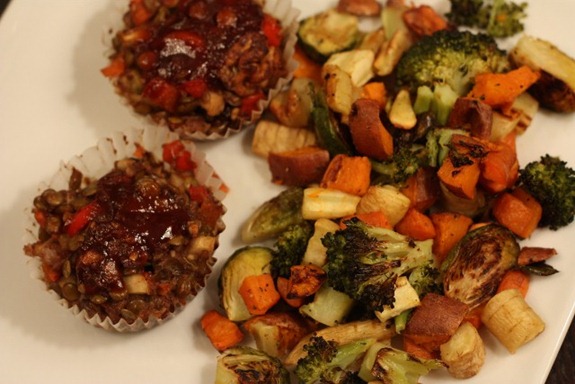 The muffin method worked perfectly. The glaze was so flavorful. LOVED the chunks of walnuts and apple and raisins!! The lentils (I used green lentils) were the perfect texture, and the ones on the top crisped up. The muffins did fall apart pretty easily, so I don’t think I would have had success in a loaf form. Another great reason to use muffin cups 🙂 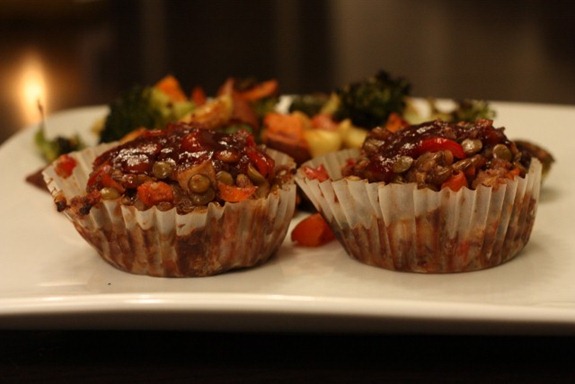 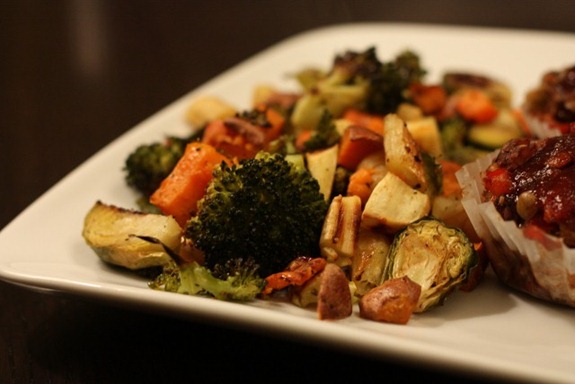 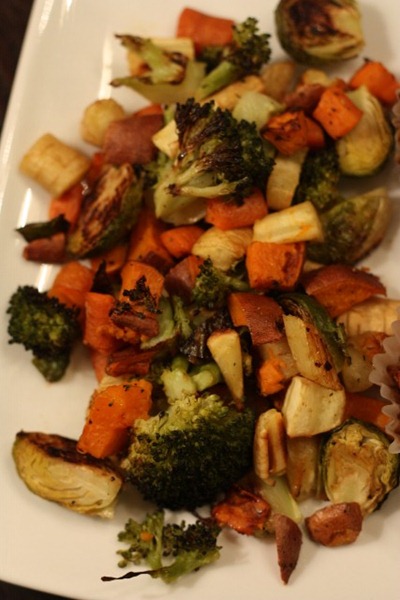 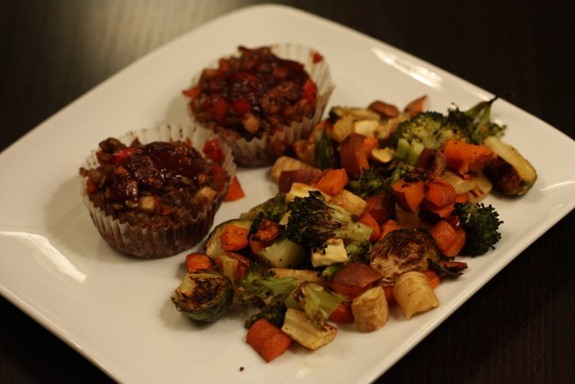 I love embarrassing the beer glasses with sparkling water 😉 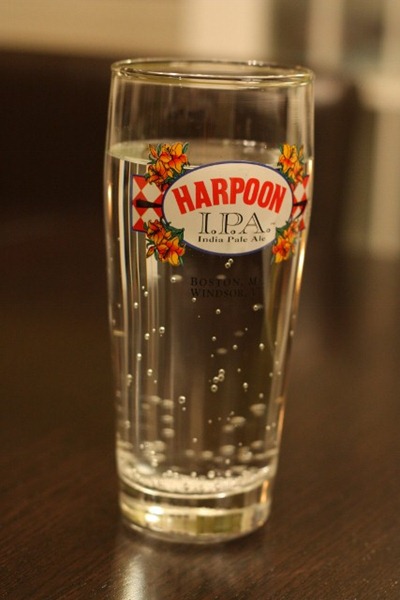 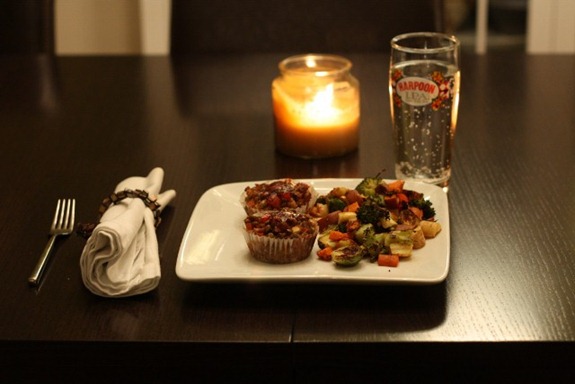 But you know I didn’t eat by candlelight all alone

After the photoshoot I took my plate to my computer for a dose of GLEE (I’m officially hooked!) I found episodes 9+ all over the internet, but episodes 5-8 are no where to be seen, so I ended up paying $1.99 to Amazon on Demand to watch it. Yes, I could have waited on Netflix, but spending $4 on good entertainment is no different then going to the movies or getting a glass of wine in a restaurant! 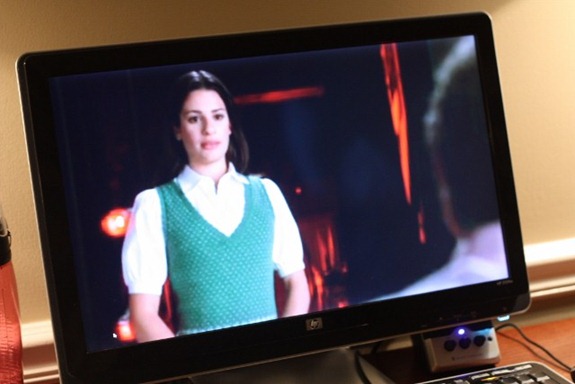 Going to sip this Sugar Cookie Sleigh Ride while I ice my foot and am wrapped in a hot towel out of the dryer. [Foot is doing OK during training, but it is not without some of its usual aches and pains]

Tomorrow I’ve got to BE in Rock Hill at 6:45AM. I’ve got overnight oats in the fridge and am setting my alarm for 4:45AM to get in a pleasant breakfast before I could. I could just make a PB+J to eat in the car, but that wouldn’t be very fun now, would it?