SURPRISE!!! I ran my half marathon 2 weeks early!!! 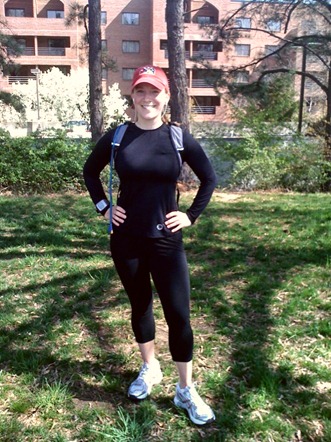 You wouldn’t buy a car without test driving it first.

You wouldn’t perform in a dance recital without dancing in your costume.

Why would you not want to run your course ahead of time if you could? I’ve actually been planning this since I started training but wanted to keep it a secret. I not only wanted to familiarize myself with the course, but I wanted to take some of the pressure off of race day. Since I have so many virtual spectators and all 😉

I was thrilled to come in 1 minute before my goal time of 1:57! That’s not even race pace, so that’s huge news. 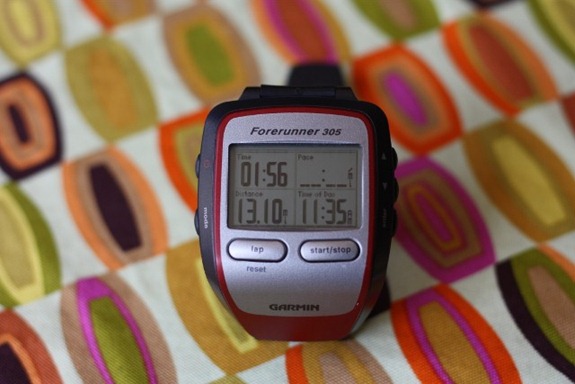 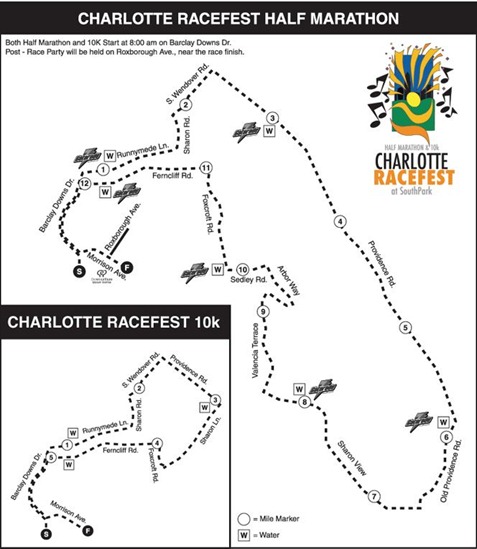 I wanted to do a complete trial run of my breakfast, outfit, fuel and energy, so my day started at 5:45 when I got up to make breakfast. The real race is at 7:30AM and today I planned to run at 8:30 so I counted back 2 hours to digest and would see how it went.

Got downstairs around 6:10 or so

I drank a mug of plain water to hydrate 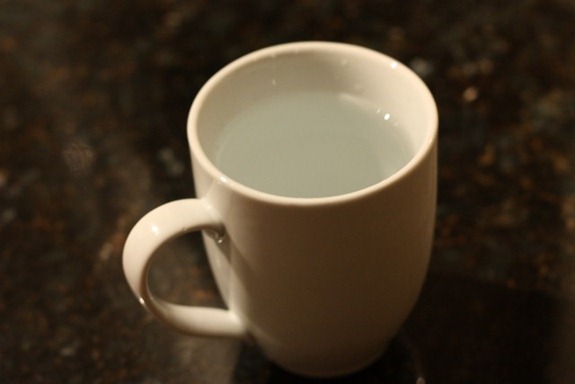 Then spent 10 minutes being SUPER BRAVE and killing this roach with my slipper. EEEEK! 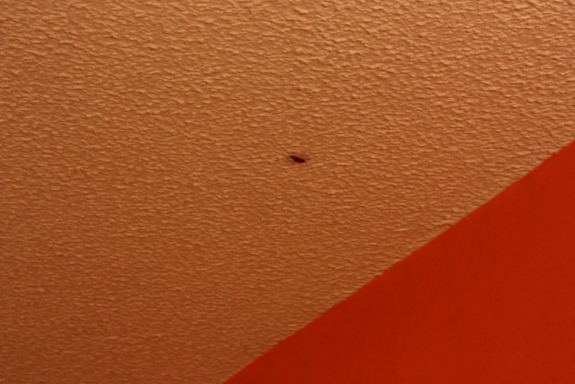 I loaded up on carbohydrates and took a lot of the PRO and FAT out of my normal oatmeal bowls. Didn’t want all that in my system and I wanted a quicker digest. 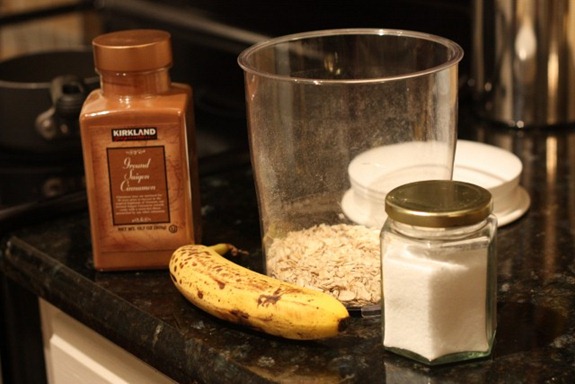 I also want to be sure I get in a nice cup of coffee for the extra stamina it gives me! 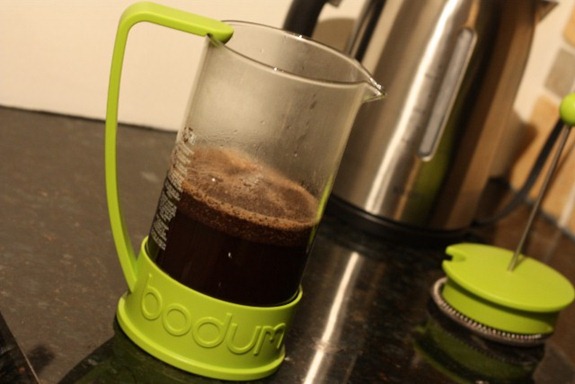 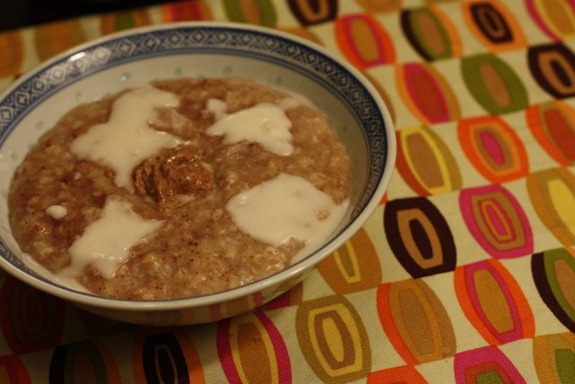 I left in the nut butters for some flavor and satiety but left out the milk, chia, and other toppings. This bowl was about 350 calories.

GUYS, this bowl was GROSS!!!!!!!!! OK, I take that back. Oatmeal is never gross. But I cannot believe what a difference it was without any milk products. First off, it took twice as long to cook as normal. The gelatinization was extreme. You MUST add milk (cow’s, soy, almond, hemp – whatev) to your oats. If you have never made it with milk, you must. This was just awful compared to normal !! 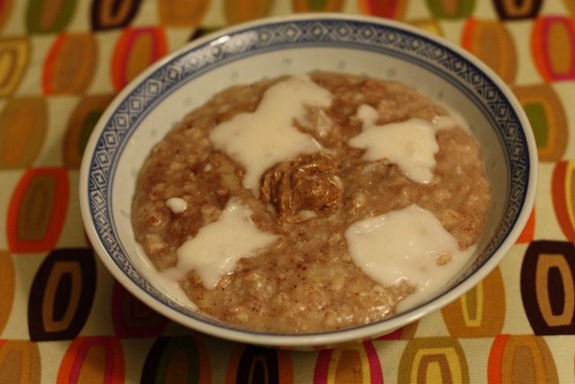 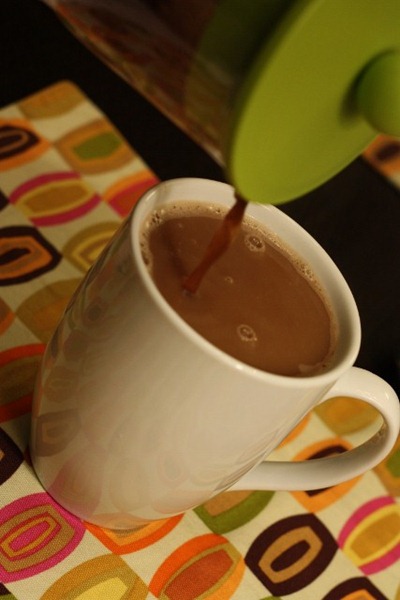 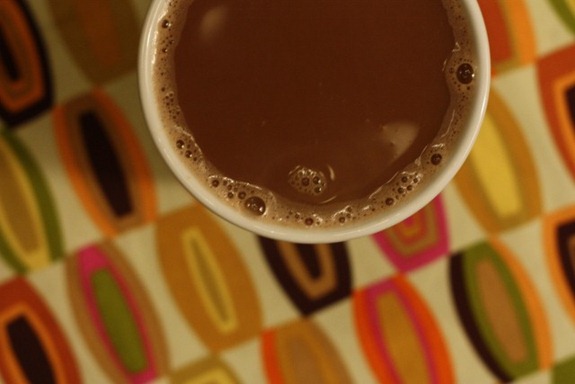 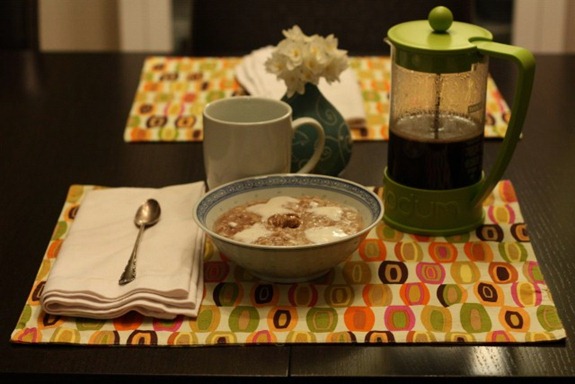 Coffee was finished at 7.

But the fuel amount was perfect.

Next up I played on my computer and put some Dixie Chicks, Aqua and Rolling Stones on my iPod along with the usual Broadway, Glee, and energizing songs. My music was awesome today!!! All the right songs came on at the right times.

Then I got to work making my fuel.

I’ve been debating what to put in my Camelbak for a while now. Plain water and take in CHO during the run vs continuous fuel via a sports drink.

After lots of debate (both internally and with RDs and friends), I decided to go with an all-in-one continuous stream of carbohydrate + electrolytes + water. All-in-one just made more sense to me than taking in a bunch all at once an hour in.

Technically I probably had close to 1500 calories stored in my body and one doesn’t NEED a ton of fuel during a 13 mile run, however, for optimal performance, taking in CHO to spare glycogen and especially hydration is very important to keep pace and energy as high as possible. And you want to be going your hardest throughout the entire duration of a race! [I will probably make a weaker version of this drink for future long training runs.]

I went to the Gatorade Sports Science Institute (recommend by an RD colleague), which has a good amount of research summarized.

Based on this information and the breakdown of Gatorade, I calculated the following to determine how much water, CHO, electrolytes and osmolarity for a homemade sports mix. Sure, I could have just put Gatorade in my back, but I wanted to be all green and Real Foodish and make it myself 🙂 And I’m a super nerd who likes math! 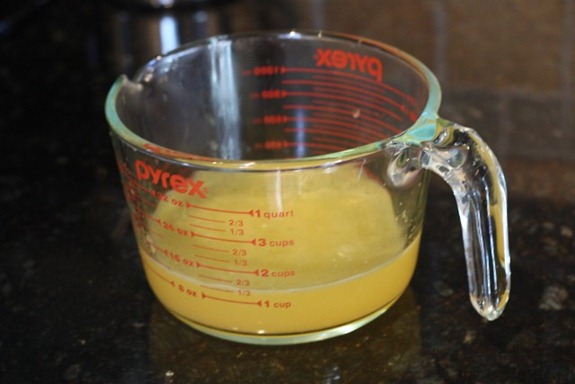 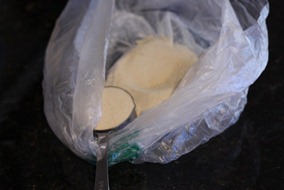 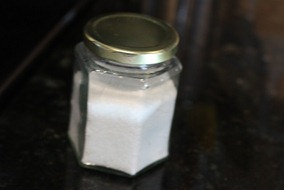 The remains of my orange after hand-squeezing 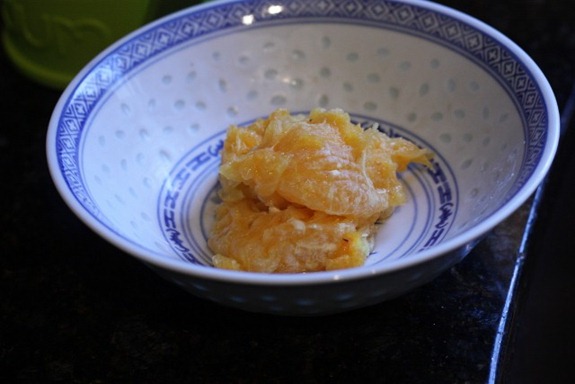 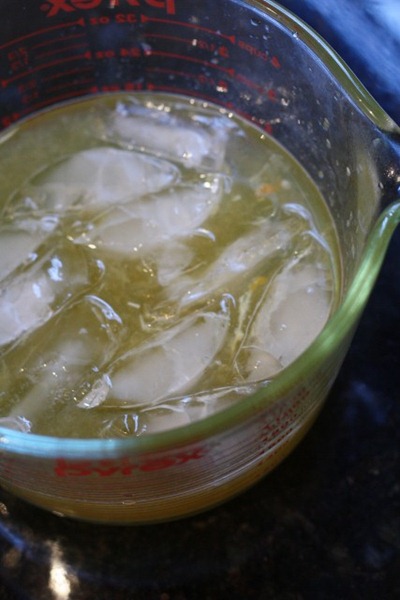 The sports drink was perfect – sooooo tasty during the run!! And very environmentally friendly and cheap too 🙂 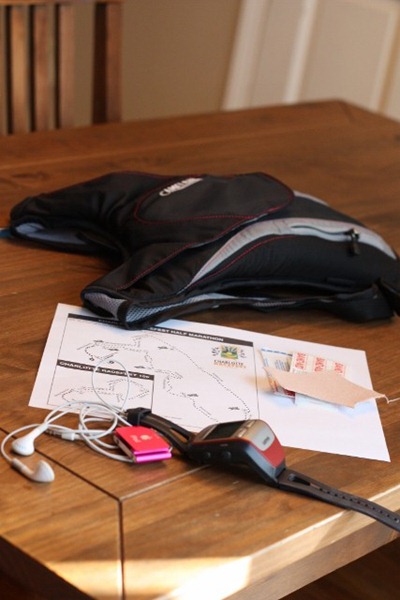 Also wrote the course on my hand at Emily‘s recommendation, which was a LIFESAVER! 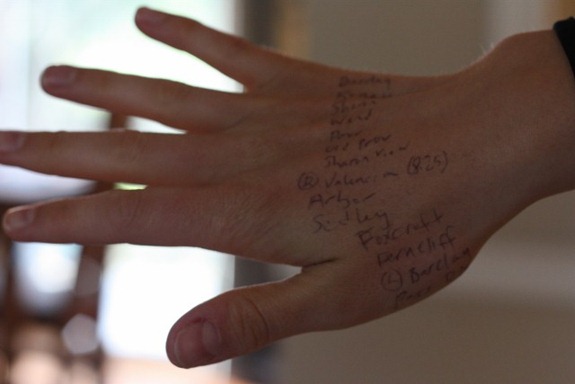 And since I have no Road ID, I made an In Case of Emergency post-it for my camelbak.

30 minutes later than schedule, I was off right at 9AM!

The first 6 miles were a piece of cake. They went by really fast and didn’t have many hills. In fact, a good portion of them were downhill.

Mile 7 was ALL up hill, but I already knew this!! Emily and I had looked at the elevation through this site.

Check out the elevation below!

Matt came to say hello on his bike around mile 8. I was doing well, but this was where I lost some of my focus and slowed down a bit.

He took my picture! 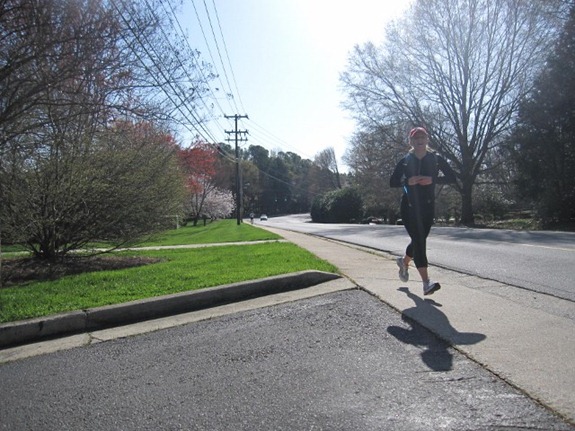 And again at mile 9! 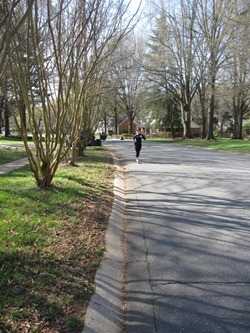 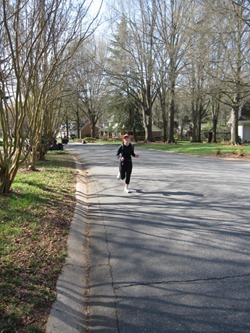 The mile 9 hill was KILLER. And then I took a wrong turn – right instead of left.

By mile 10, my breathing and legs had plenty of energy, but my FEET and tendons and ligaments and basically all the structure of my lower legs were starting to tighten up a lot.

Mile 10 was a reallllllly long up hill. Ouch!

Mile 12 I was greeted by a smiling EMILY!!!! She wasn’t able to run because of her sickness, but she was so sweet to meet me at the end. I picked up my pace when we met and chugged in that last mile. 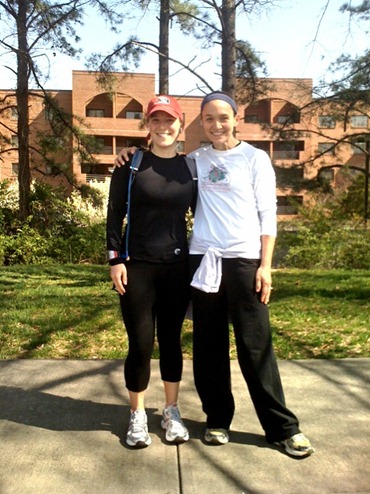 Glad to see my avg. pace under 9! That was my goal, even with those big hills.

My goal for this half was under 2 hours, so I’m very pleased! And while I am totally pooped right now, I know I could have pushed myself harder. I ran these 13 at regular “Kath pace” – just out for a solid run. But I know I can go faster. So two weeks from now when I’m running RaceFest, my goal is to beat 1:56!

On the one hand, this run was a huge deal for me. A personal distance record. A solo run with hills. A race practice! I am definitely more tired than I ever have been.

On the other hand, it was over so quickly that it was not that big of a deal at all!!

[I can’t even fathom how I’d feel after 20+ miles – does the body strain ever plateau!?]

When I got home I was feeling all hard-core and decided that my legs needed some major icing. 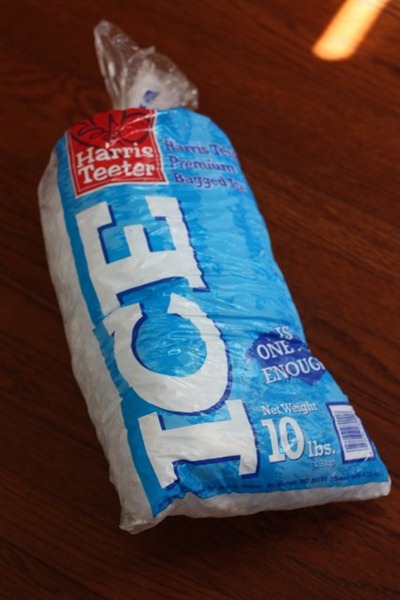 Hardest thing I have EVER done in my LIFE!!!

OMG, I almost did not survive. My feet were in so much throbbing pain just 10 seconds in I kept having to pull them out. My legs actually liked the ice, but I couldn’t put my legs in without my feet!!!

I tried lamaze breathing and pretended this was what labor is like (I always compare pain to labor even though I’ve never given birth because it’s supposed to be the worst “normal” pain there is. I can’t WAIT to see what it’s like!!)

I lasted 4 full minutes in the bath and had to get out. Totally wimpo.

But my legs did feel immediately better! Maybe those 4 minutes helped.

OK, I am ready to be done with this post so I’m whizzing through lunch.

I can’t imagine long-run recovery without a SIAB and toast. It’s just exactly what I crave. The thought of meat or fish or savory vegetables makes me want to barf! 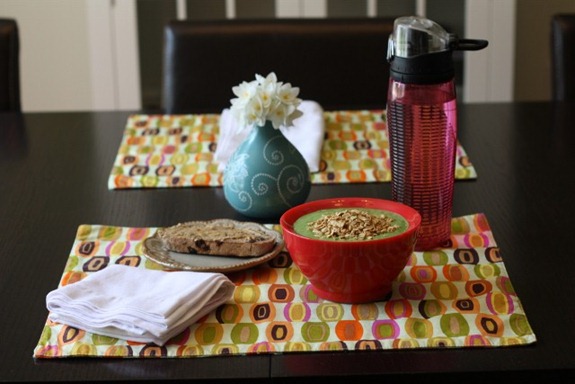 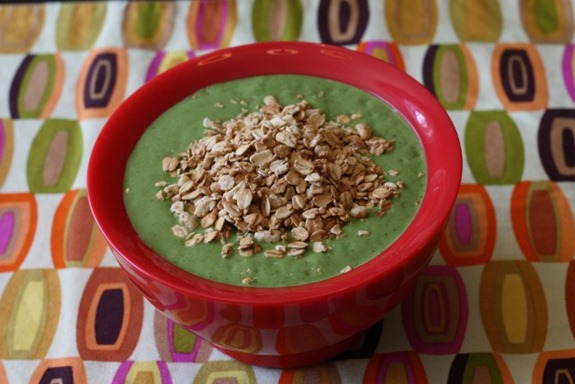 Cinnamon Raisin Walnut from Great Harvest with some Nuttzo!! LOVE Nuttzo on bread. 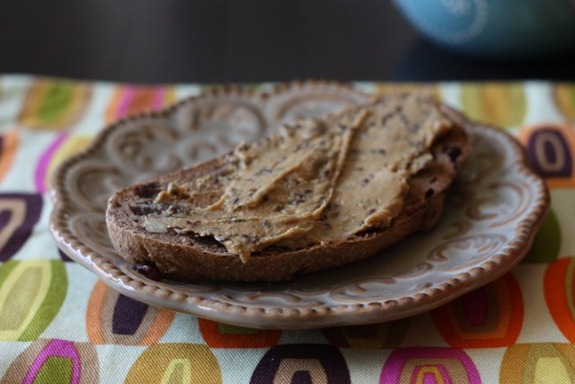 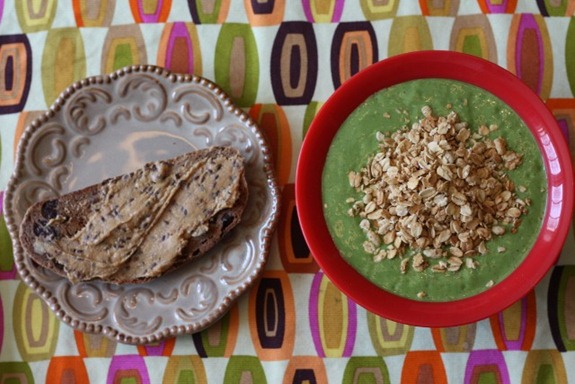 Going to drink lots of water, ice my foot and watch House Hunters!!

Happy Exercising to you all!