I went to bed at 1:30 after gabbing with Gena for hours. I decided sleep > running so I re-set my alarm for 8:30, but I woke up around 7:15 and couldn’t fall back asleep. I decided to get up and go. Today was a much better run than Friday because I went up some bigger streets. I ran about 5.2 miles in about 50 minutes or so. And I think I fixed my Garmin troubles!! Normally I don’t reset my Garmin after a run, so I think when it searches for satellites it’s still on the old run’s location. Today I reset it and it instantly went to the home screen! Crossing my fingers it works next time and my problems are solved.

After running, I brought Karen coffee in bed again, showered and packed up my suitcase. I had a 10:00 meeting with some blog readers!

Matt and I set out for Cafe Du Monde for breakfast. We met up with Renee and Casey and her fiancé Kevin right at 10.

And discovered the line was a mile long! 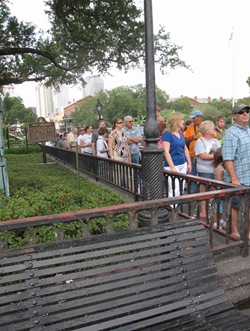 We thought about waiting, but we were really in the mood for something filling (omelets!) so we decided to go “out to breakfast” and save the beignets for dessert.

And that turned out to be an adventure. For a city that loves breakfast + brunch as much as NO, we had the hardest time finding somewhere that served omelets and had a table for 5! After about 40 minutes more walking, we finally settled on a little cafe. It was 10:30 by now and I was pretty hungry, but I was also surprised I wasn’t hungrier considering my run and the fact that I got up at 7:30.

I started with a mediocre coffee 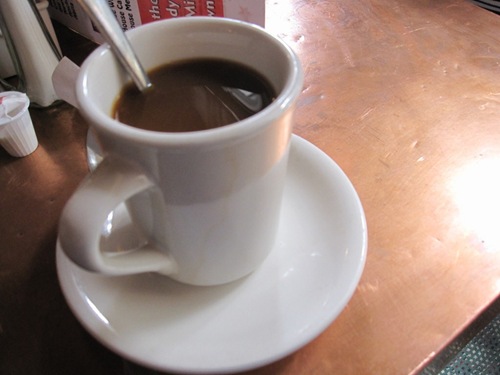 And ordered a Seafood Omelet with shrimp, crab and crawfish, Creole sauce on the side – 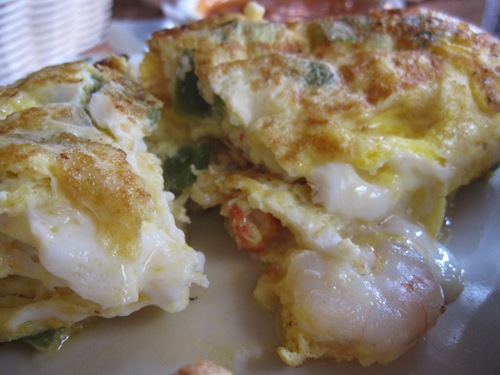 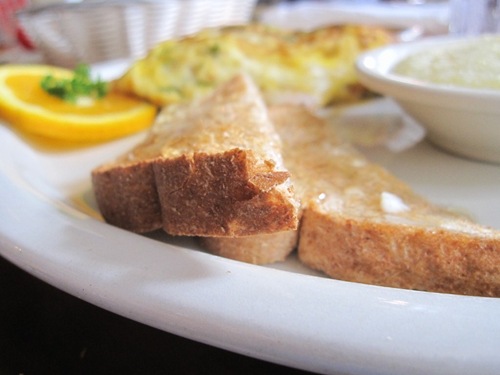 Grits and an orange slice. I tried to order fruit but she told me I was not allowed fruit unless I got a waffle! WTF!? I ate about 60% of the omelet, 2 bites of grits, and my toast and fruit. I wanted to save room for “dessert” 🙂 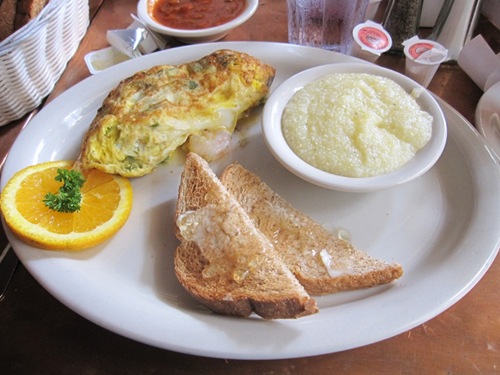 Kanz got a Jambalaya omelet stuffed with rice and other goodies. I had a bite – ‘twas good! 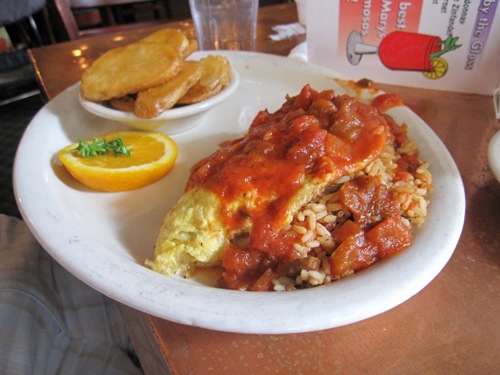 When we’d finished breakfast, we walked back down to Cafe Du Monde. At this point it has started to lightly rain and we were lucky that the line was much shorter. Thankfully Renee had an umbrella to keep us dry enough for a 15 minute wait. 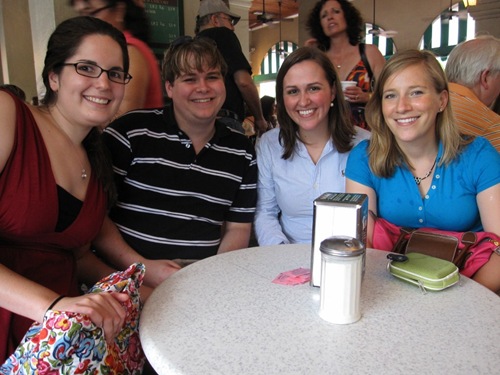 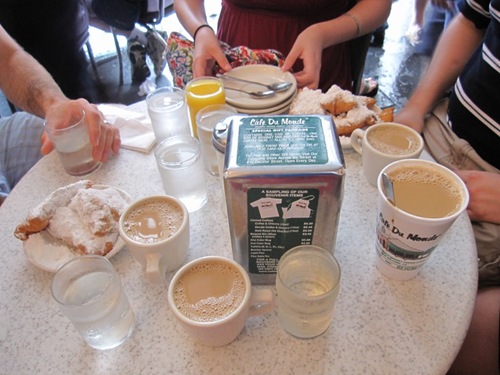 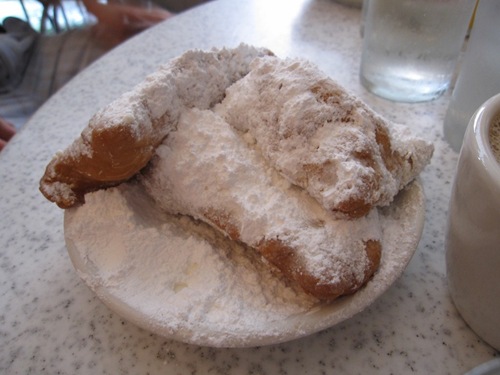 I mean, it was good, but it was just like fried dough from the state fair!! I liked how it was chewy though 🙂 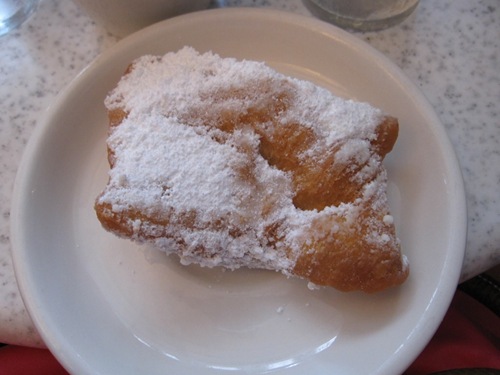 The coffee, however, was super deliciously impressive – 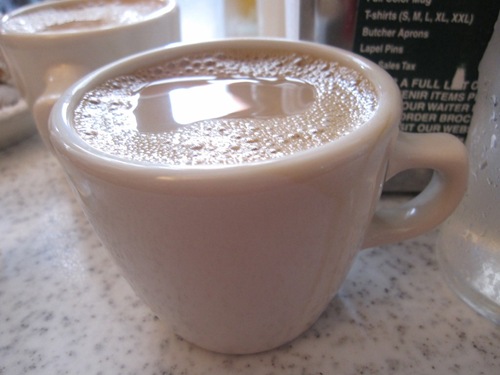 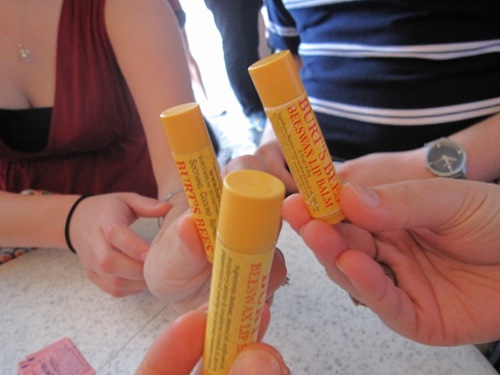 We chatted for a while to wait out the rain. Renee and Kevin shared their iPhone and Blackberry with me and I REALLY want one. I was so impressed by KERF on the iPhone and the email and calendar capabilities. I am sooooo behind the times with technology – my cell phone is a flip phone and I don’t even have text messaging!! I am cheap and don’t want to fork out money for technology, but I think it’s time. Don’t you think I have earned an iPhone by being employed full time by the internet!?!?

We finally left and made our way to a coffee shop with wireless, where I am now blogging and we’re chatting some more. It’s a bummer it’s raining! We had to check out of our hotel and are around until 4pm when we’ll head out for our 6:40 flight back to Charlotte. 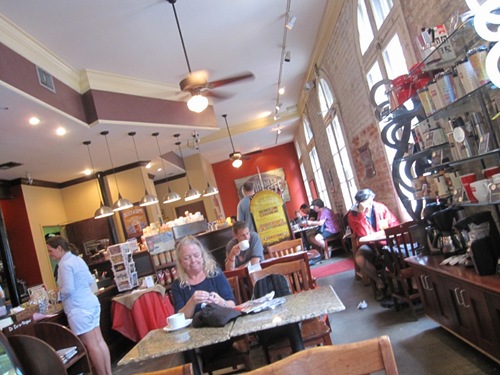 Kanz had a VERY late, wild night and is barely able to keep his eyes open. 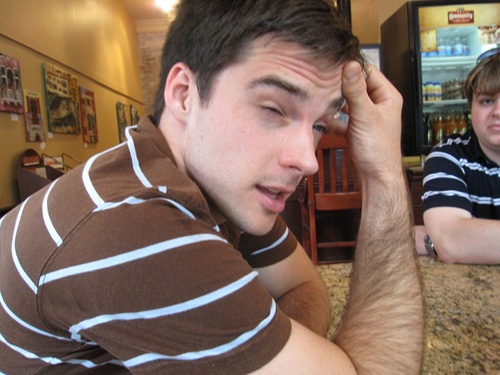 I feel tired too, but I’m very thankful I didn’t wake up with alcohol syndrome this morning.

Not sure when I”ll be reporting again – have a happy sunny Sunday!