You are here: Home / Weekend / Bowled Over. 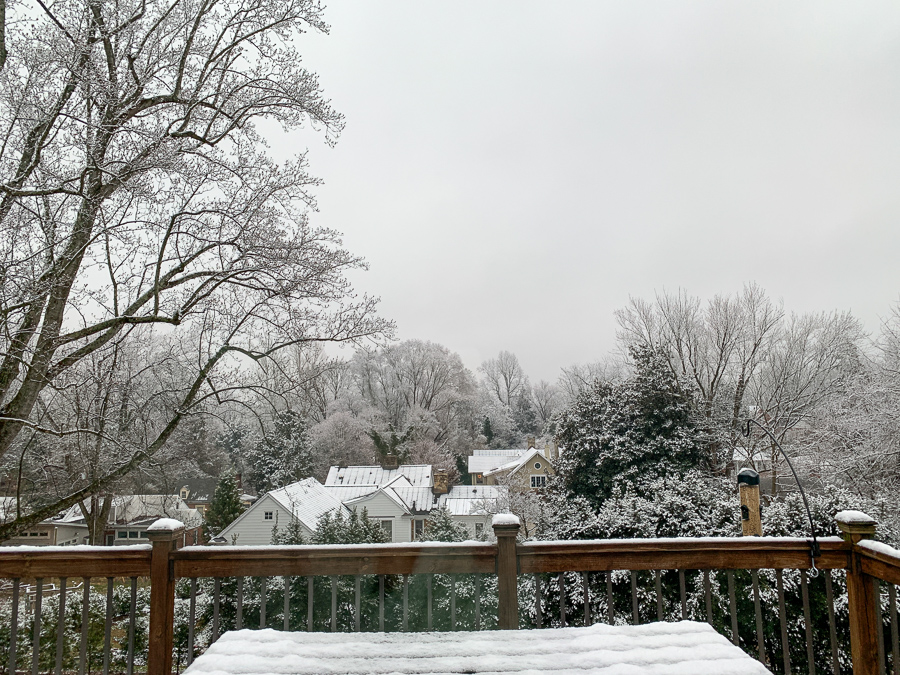 Our weekend began with a happy little snow dusting. The snow began falling right when we were getting started on Fun Family Friday! March 7 was Mazen’s half birthday (which HE announced the week before!) and so we took him bowling to celebrate. (You guys know that I always acknowledge my half birthday and I think it’s hilarious that I was not the one to point his out!) 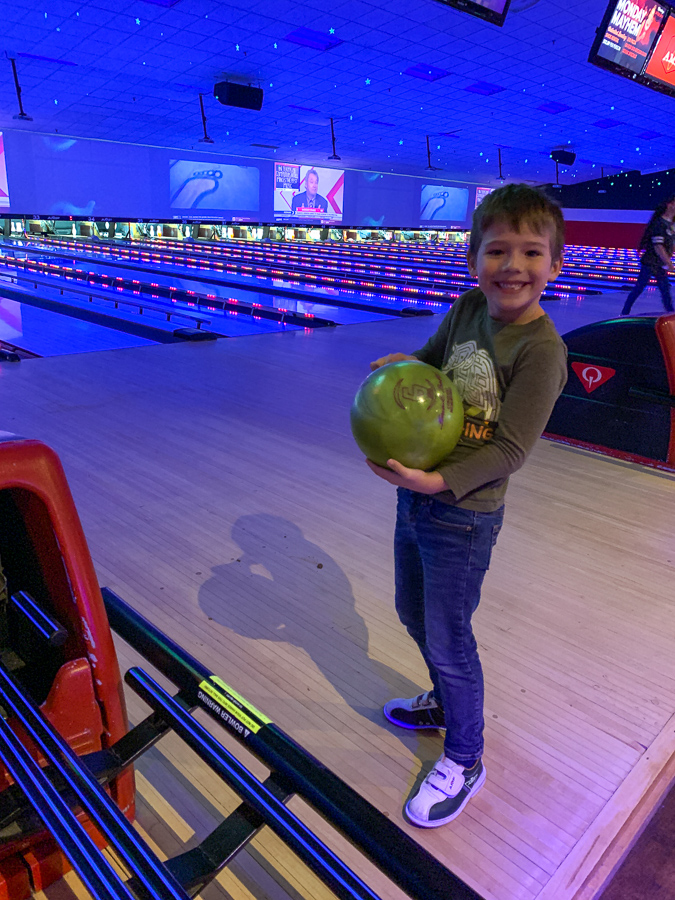 While bowling was fun, he was really in it for the arcade. (And by ‘he’ I mean Thomas. HA!) 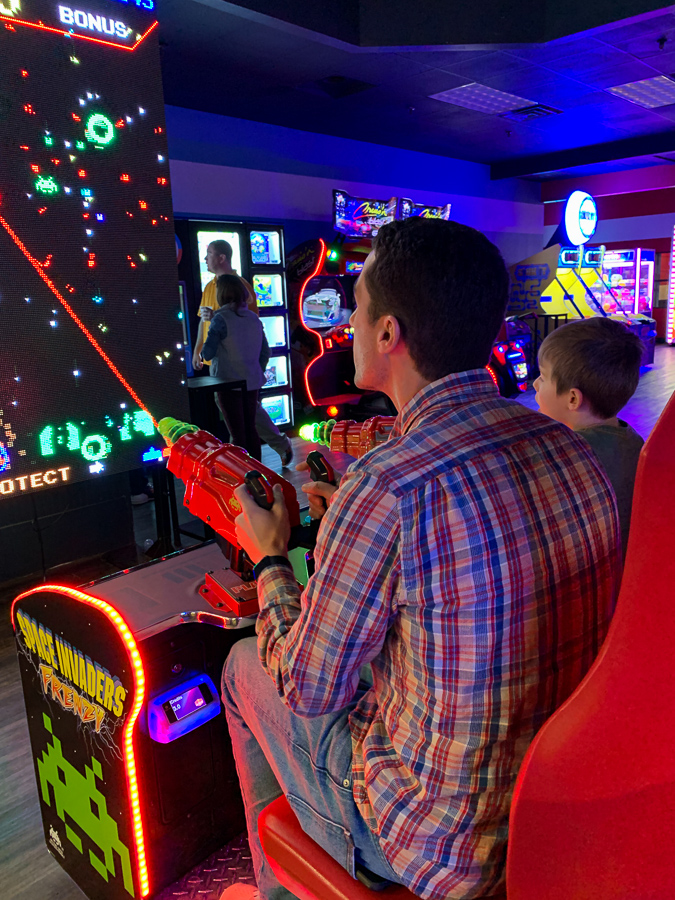 They both had a blast. 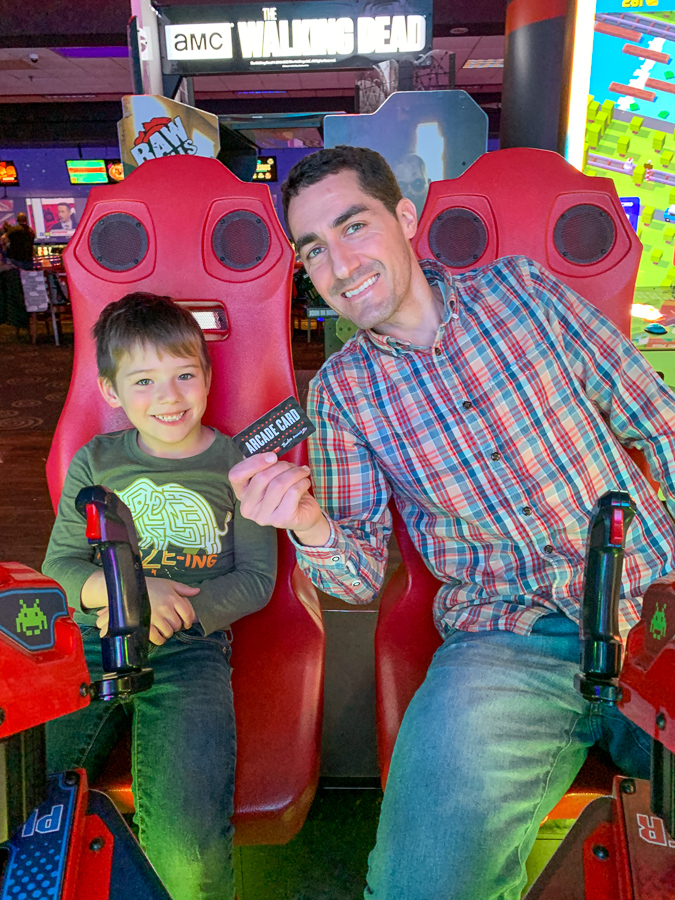 Birch wished he could play Space Invaders too. 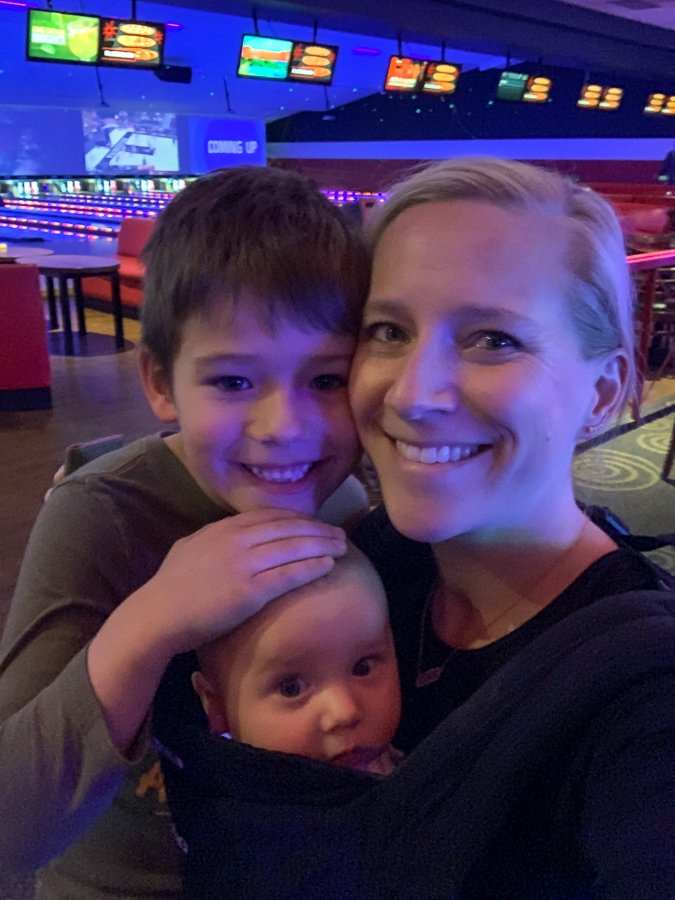 Afterward we took the party to Burger Bach and were lucky not to have to wait for a table! 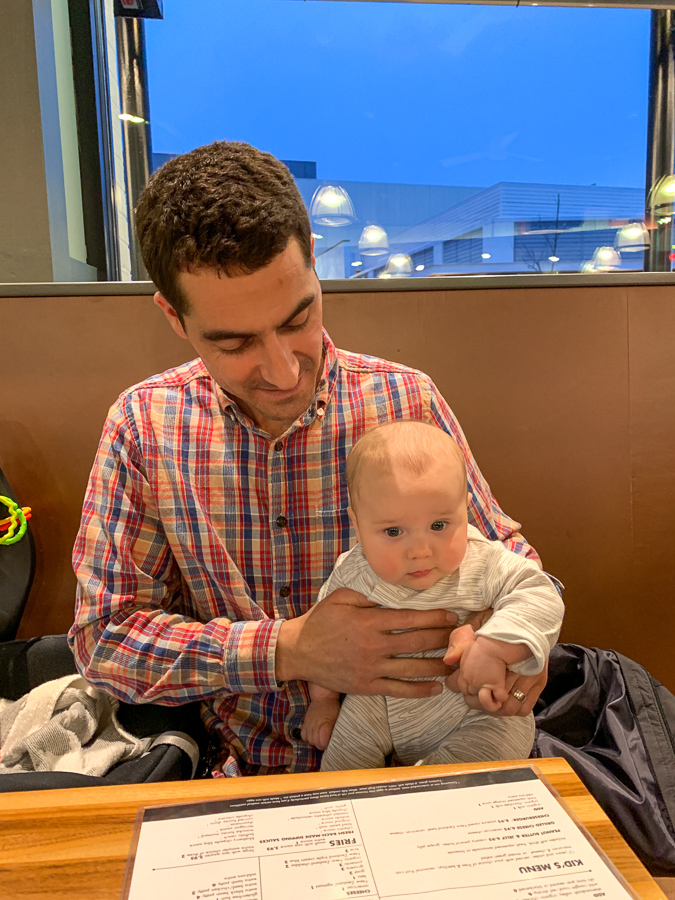 I had a burger and side salad plus a few handfuls of fries from the family bowl. 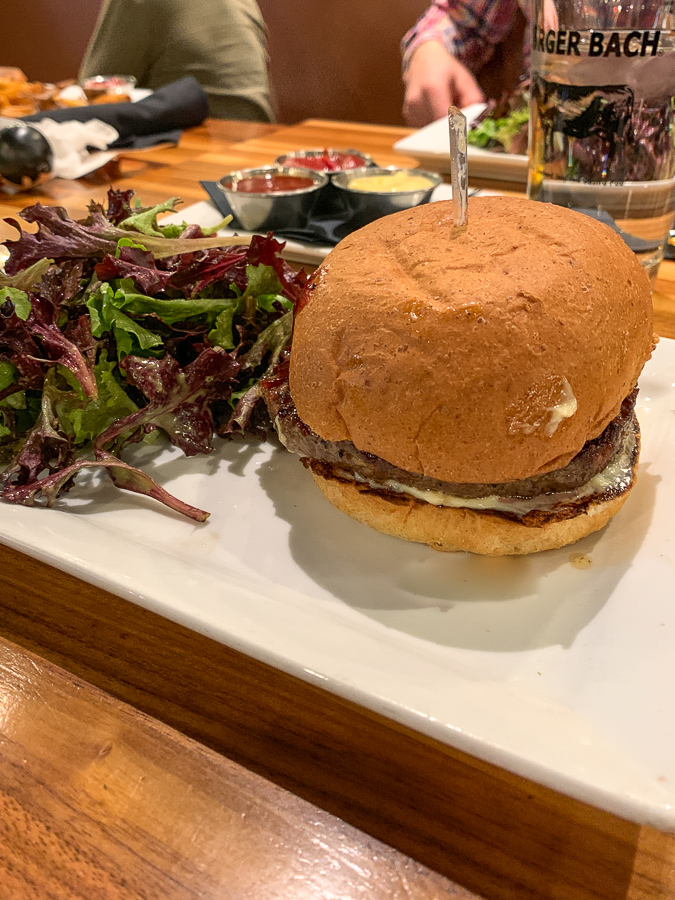 Waiting for Mazen at home I had a cupcake from the new Vivi’s Cake and Candy (the same concept as Sweethaus with a re-branding, thank goodness the buttercream lives on!) It was actually leftover from a party, and I was a little worried he wouldn’t like the coconut “sprinkles” on top and he made a point to come up to me and say “that coconut was actually quite good.” LOL – I didn’t like coconut until I was in college! 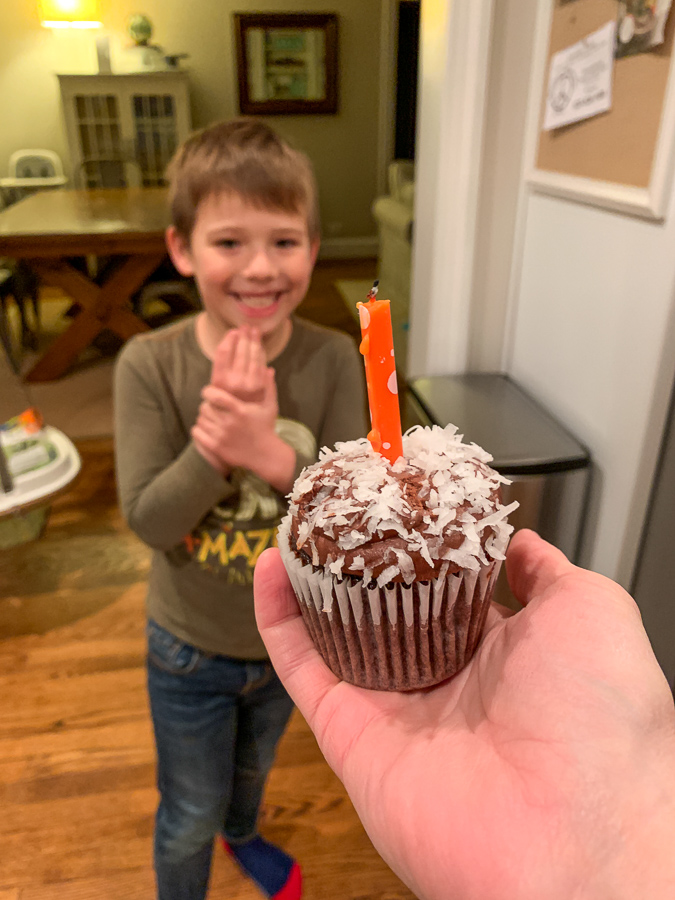 Bedtime snuggles! [This robe is the warmest, coziest thing! You must own for winter!] 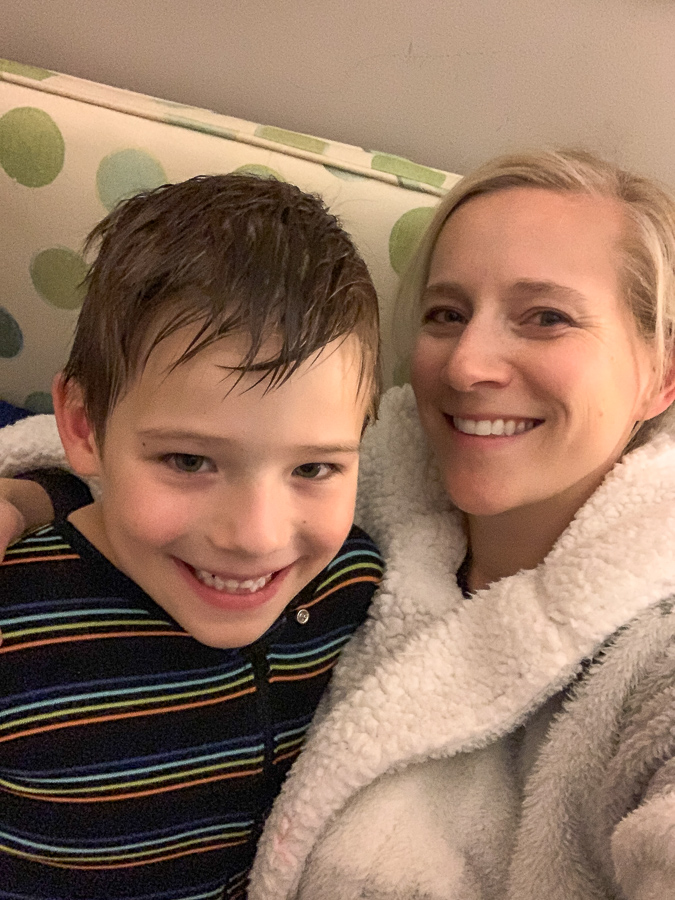 On Saturday morning I was up and at ’em for my workout class. Thomas bought some goodies from Albemarle Bread Co, and I had half a muffin with PB before I left. 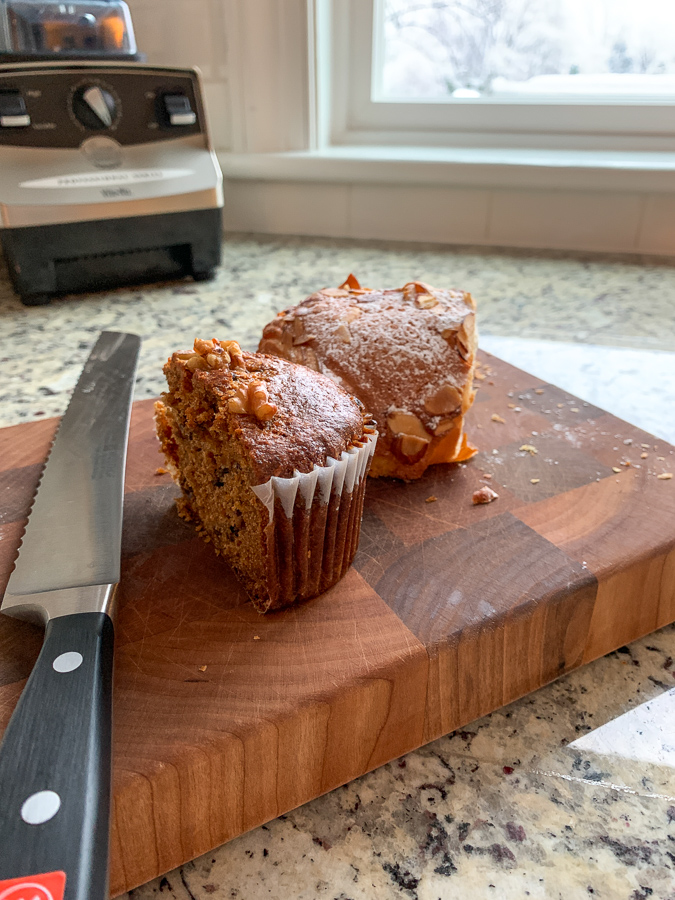 I brought my second cup of coffee and my shower stuff with me because I had post-workout brunch plans with some girls from class! 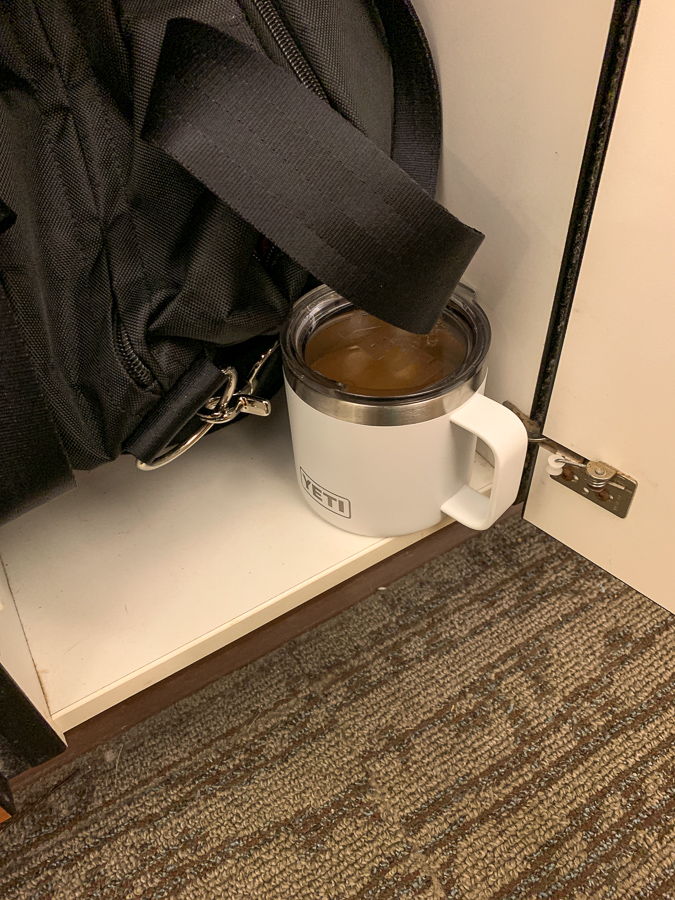 We went to The Bebedero for brunch. I hadn’t been to the new space (above Whiskey Jar) and it was great!

Passion fruit mimosa for this girl! 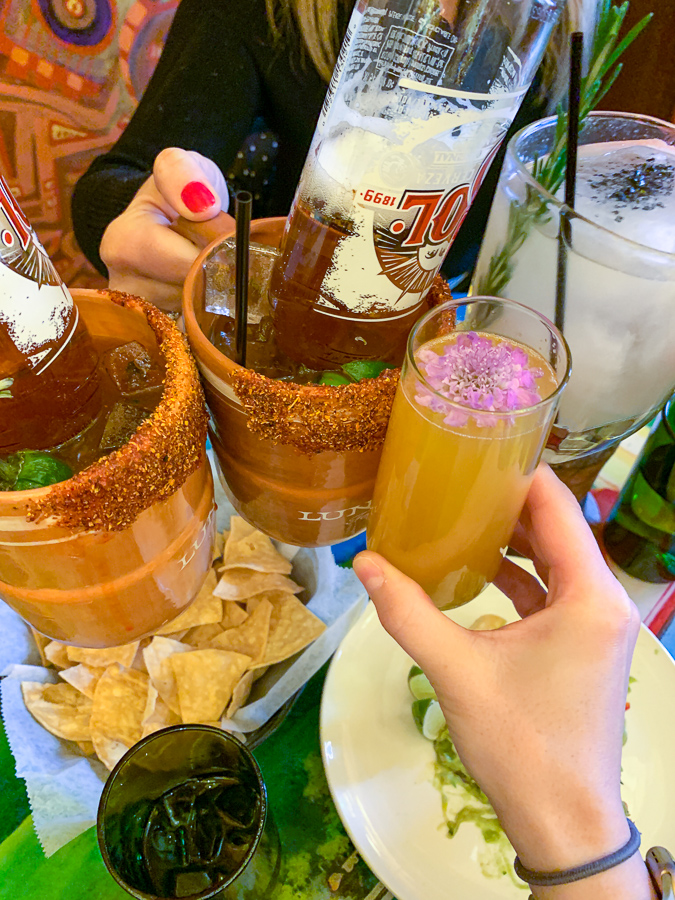 We shared a chips and guac (the BEST chips!) 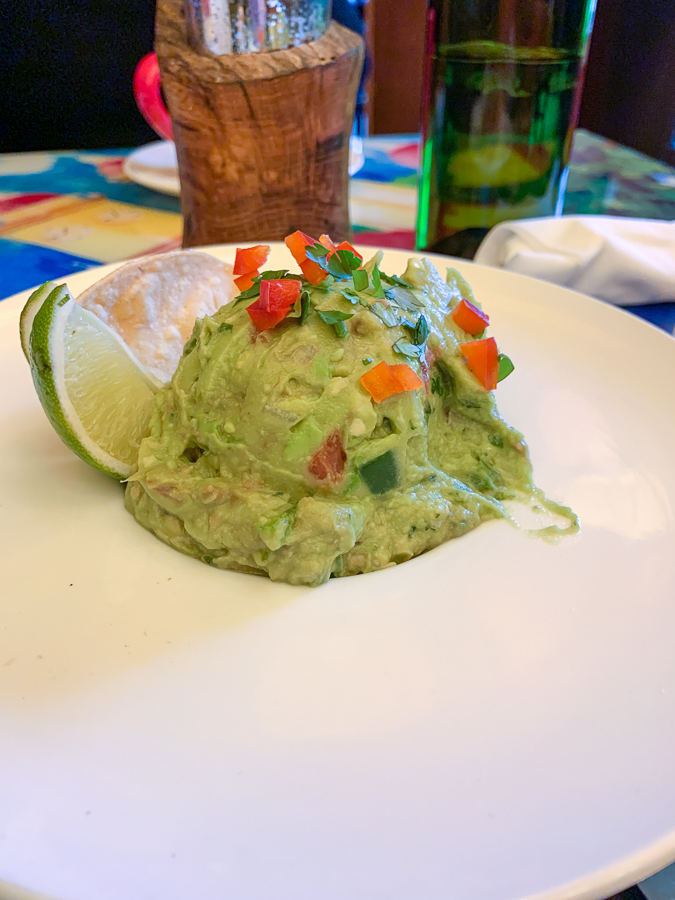 And I had the Bebedero twist on Eggs Benedict! 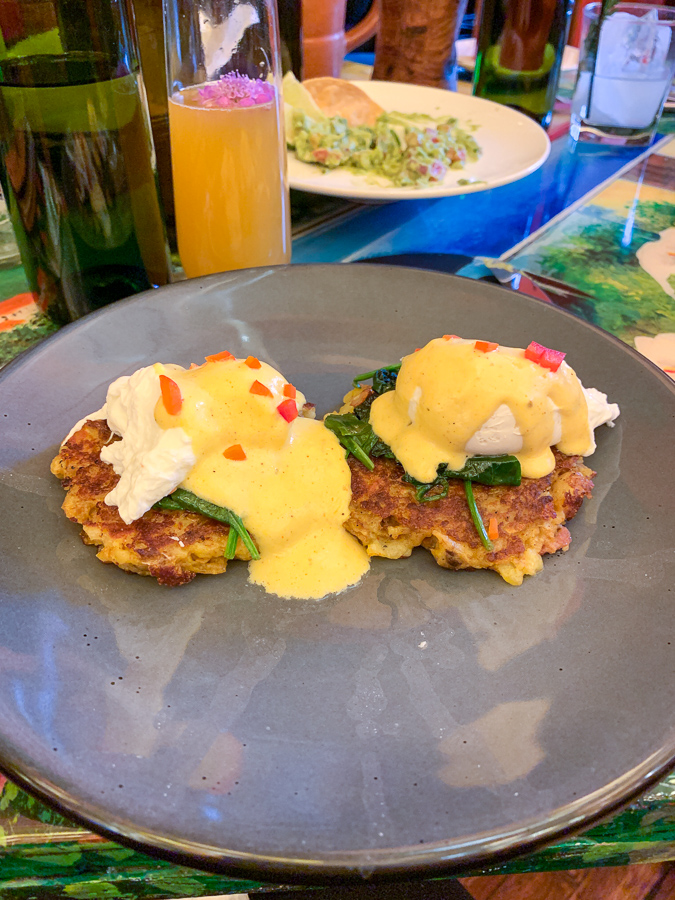 The rest of Saturday looked like this. Lots of floor time and hanging out with my boys. Birch took a THREE HOUR nap! If you’ve seen my Instagram Stories, you know he’s been rolling onto his tummy to sleep. While this has been a little stressful given the SIDS discussion, it’s also been awesome because he’s sleeping so much better. He’s in just a sleep sack now and out of the Merlin. I’ll do a full Birch update soon! 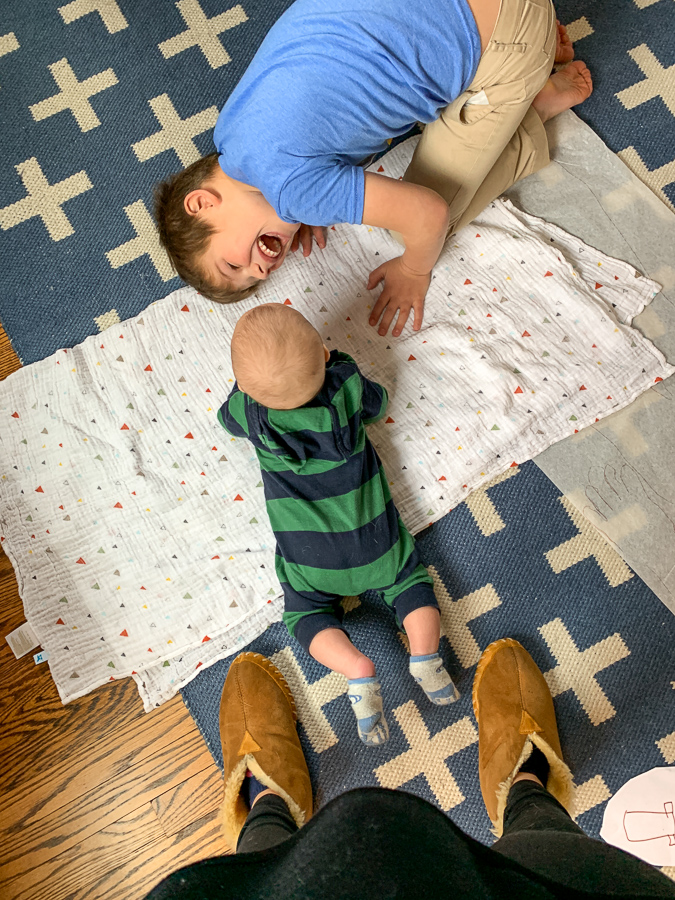 Saturday afternoon Thomas took his dad to the UVA game and then his parents came over for a casual dinner. They love their Birchie Boy! 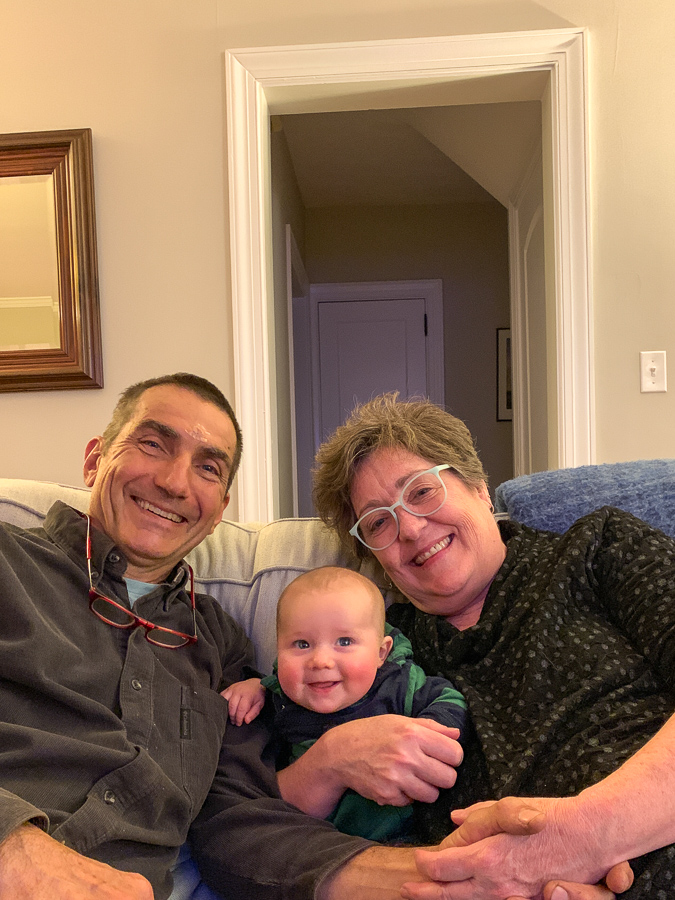 We kept it simple with rotisserie chicken, green beans, kale salad, and cornbread I made from the Arrowhead Mills mix. 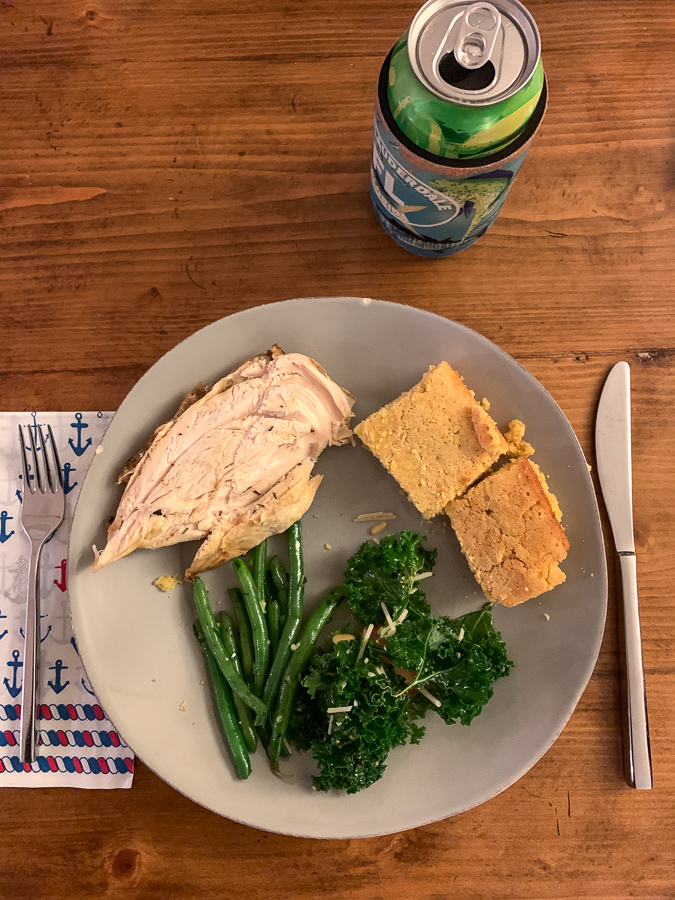 Little B joined us at the table! (More on the high chair soon…) 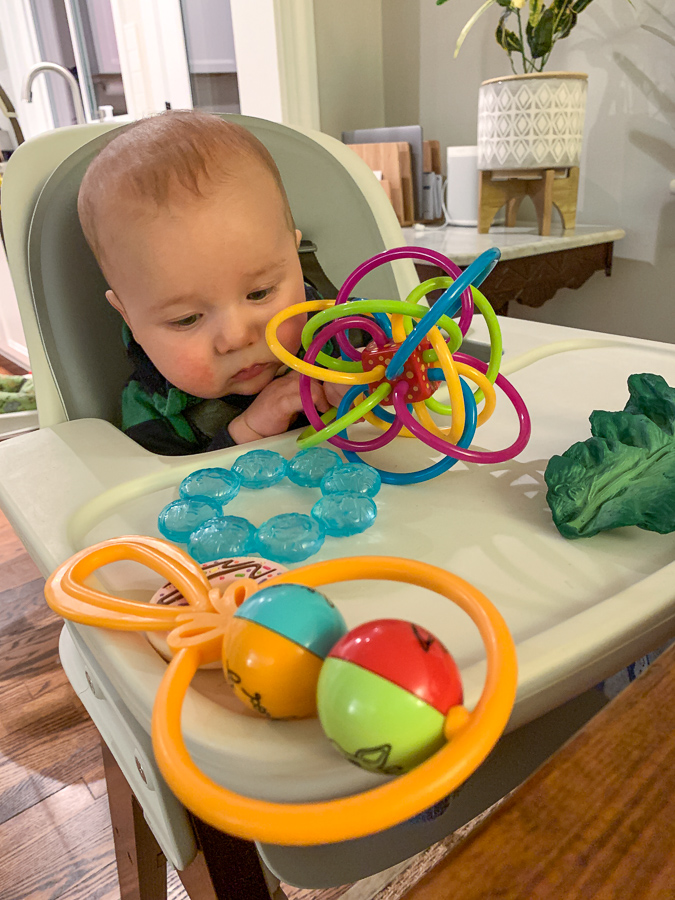 For a late-night snack (late night = 9pm), I made a little milk shake with Breyers Vanilla, milk, chocolate chips and granola. It was amazing! Thomas and I have been watching the series The Affair through Showtime via Hulu. It’s really good! 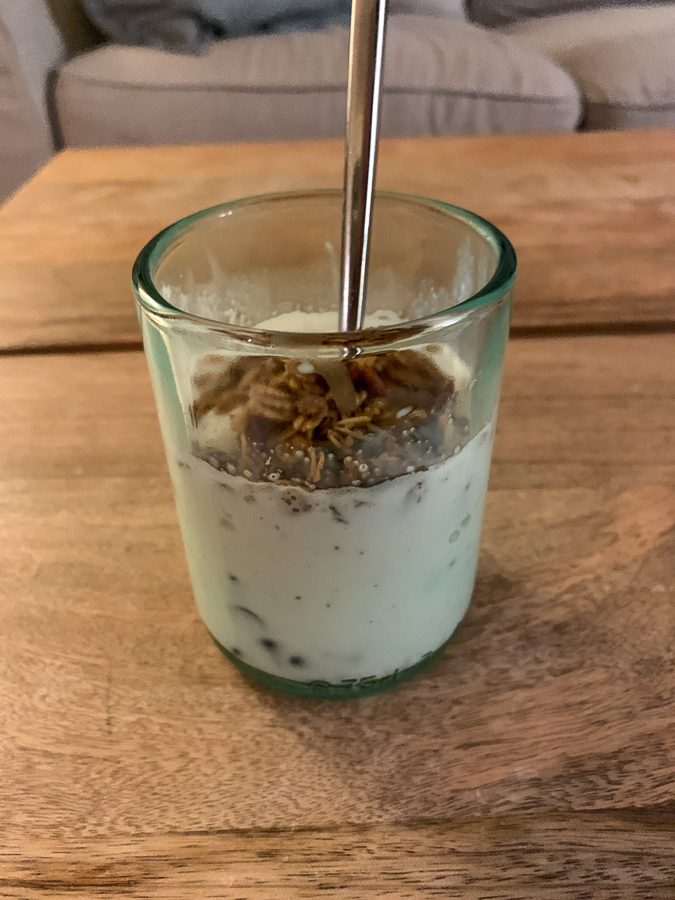 On Sunday morning we had lots of snuggles, more bran muffins with eggs, and a full day of soccer! Thomas played in the morning, and I went to women’s league in the afternoon! SO HAPPY to be back! 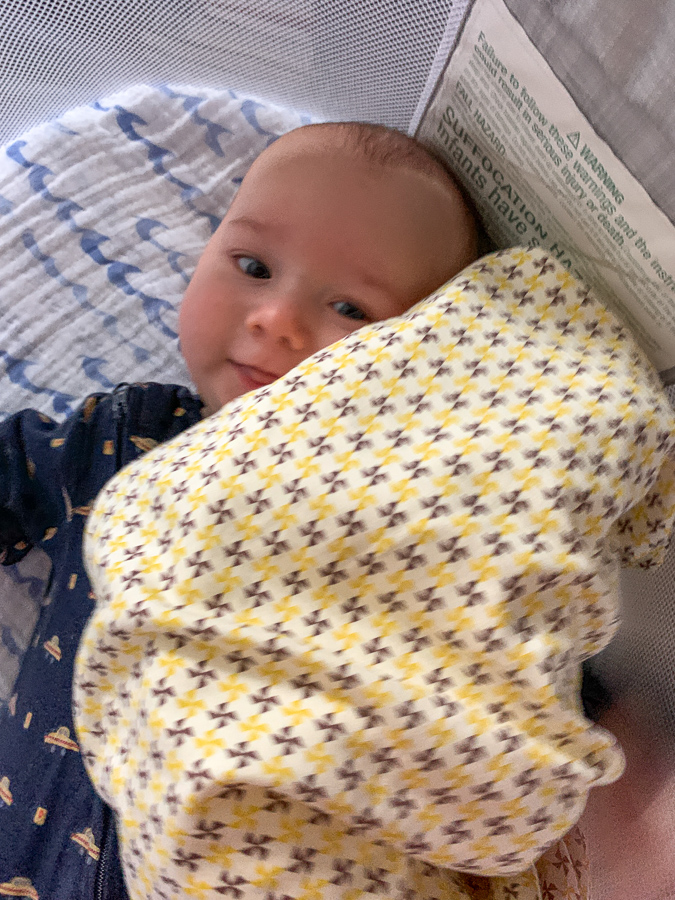