It’s a bittersweet end to an excellent whirlwind of a weekend. I can’t say how excited I was to come home to blue skies, 60*, green grass and red, yellow + orange leaves. I think as much as I say I’d like to live in a city, I really do love our house, neighborhood and state. And kudos to the husband for a clean house!!! He’s so cute because I always leave saying in a sing-song tone: “It would be lovely to come home and have everything look perfect” and he’s always up for a challenge <3

Backtracking to this morning – I haven’t been by my computer all day!!!

I was awake at 6am and ready to start the day but our run wasn’t scheduled until 8. After some in-bed web browsing, I got up, packed, put on my winter gear and ate half of this banana – 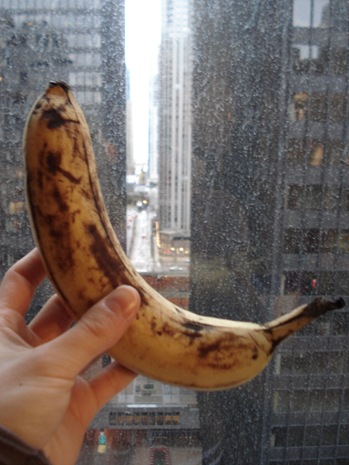 I met my loyal and brave blog reader Anne and Roni of Roni’s Weigh in the lobby for our planned run along Lake Michigan. There was lots of drama this week about it being too cold to run – but it turned out to be perfect running weather!! We did somewhere between 5 and 5.5 miles – down by the river, out and down by Grant Park, and then Anne and I finished in Millennium Park. Thanks to you both for joining me!!! I gave Anne some Quaker True Delight bars 🙂 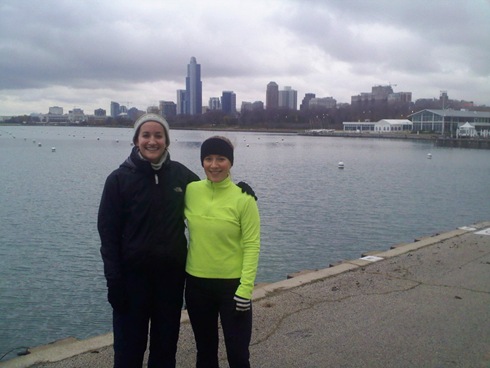 And one with Roni! 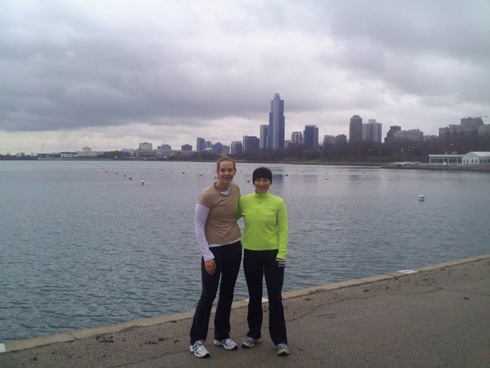 After a quick shower, I was back down in the lobby to meet Anne and Jenna to walk to Panera for our second blog meet-up. After 15 brisk minutes, I was munching on this delicious grain bagel, which I topped with the other half of my giant banana (mashed!) and a packet of Justin’s Maple Almond Butter that I found at Starbucks yesterday. So hand! 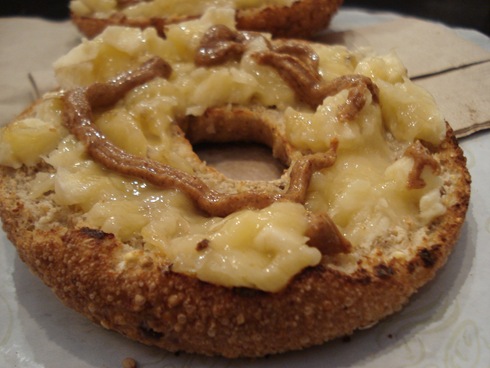 Plus a Hazelnut coffee – 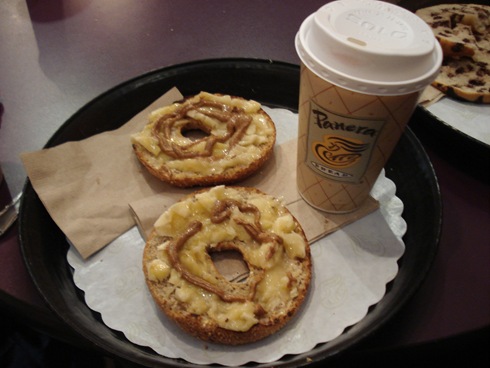 And a bite of Anne’s extra chocolate chip bagel! (She got it for free b/c they messed up her order) 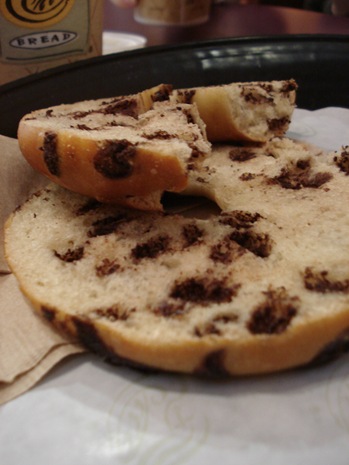 Here we are chatting it up! 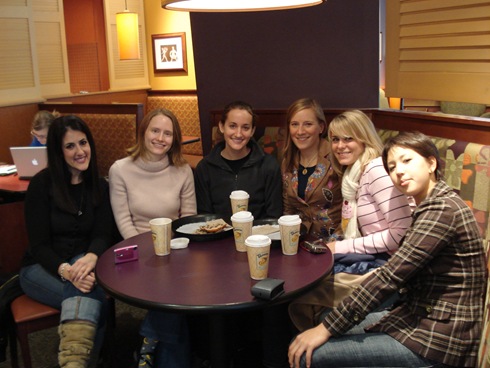 After brunch where else would Jenna and I want to go? Whole Food!!! Jenny was SO KIND to offer to take us to the airport. THANK YOU FANCY!!! And we drove right by the mammoth Whole Foods near her neighborhood on her way out – where we had the brilliant idea to get lunch to go! 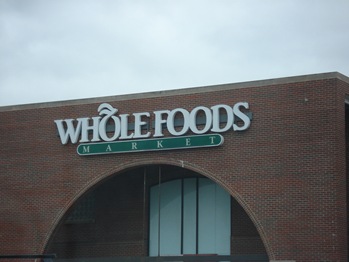 After the airport drive, a long check-in line and an even longer security line, I just barely made my flight!! I had to eat my salad on the plane (I was starving by 2pm despite the late breakfast). Taking a photo was definitely awkward. I think about 10 people were staring at me (or maybe they just wanted my salad!) But I just snapped this as quickly as I could. I can’t begin to remember what all was on the salad, but I think the 3 kinds of tofu were my favorite! 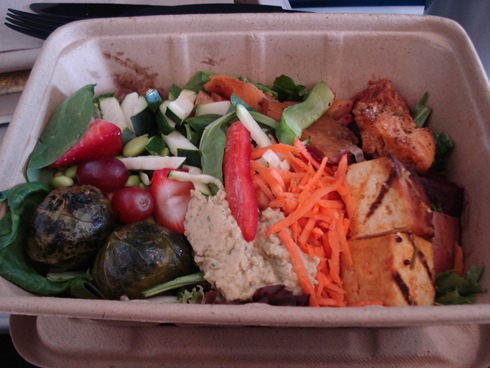 I wasn’t really hungry when I packed the salad (which was $10!) at Whole Foods, so I didn’t put on enough stuff. I was still hungry after so I ate the apple I brought from home. 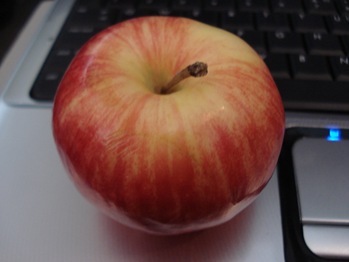 My flight went perfectly – I got to edit the video in flight and had more people looking at my screen! I had on my headphones so they couldn’t hear. A nice man asked me at the end of the flight what I had been doing, so I told him about KERF. Hope he stopped by!

Once home at 5:00 (where’d my hour go!?) I began to unpack the loads and loads of Quaker swag, including these great gifts from my readers! Two kinds of soup, coconut butter, pumpkin bark, a delicious smelling tea! 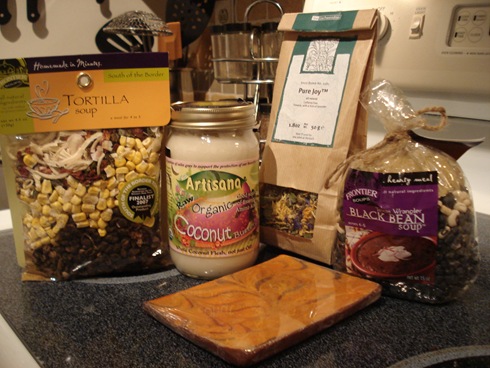 And I finally got to try Anne’s pumpkin chocolate bars for a snack! They are SO GOOD – mostly because of the huge chocolate chunks 😉 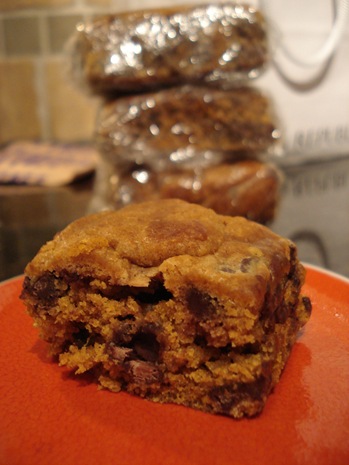 After taking a bite, I decided to have oatmeal for a snack! In honor of Quaker and because I skipped it this AM. So I made half a packet of Cinnamon Swirl with some soy milk along with wheatberries and the pumpkin bar crumbled on top. SO GOOD!!! 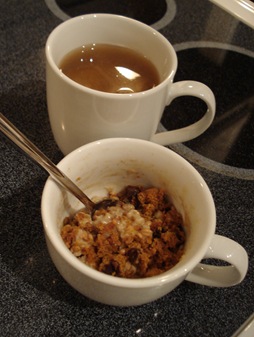 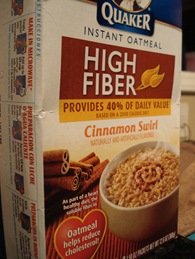 Yesterday during our big day at the Quaker Headquarters they made the big announcement that they are having an oatmeal challenge between the 15 of us to come up with an original recipe for a bowl of oatmeal! The prize? An all-expenses paid trip for two to the 2009 Quaker Oatmeal Festival in Lafayette, CO and 3 nights in Breckenridge, CO this January!! I think I would love to attend the Quaker Festival almost as much as the trip itself! The winner’s recipe will also be featured in Dave Grotto’s new book.

Of course the pressure is on for me with all of my previous combos. I’ve got an idea that actually the husband helped me fine tune at dinner. Wish me luck!!

So I asked the husband to plan and shop for this week’s groceries and he fail miserably. I basically had to help him via the Internet this afternoon. But that’s OK because I am good at planning and shopping for food 🙂 Here’s week 2’s goods: 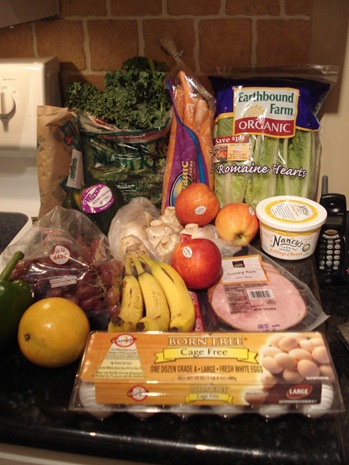 Not bad!!! This week could have been even less, but the planning wasn’t ideal. I also came home to sour milk today and we are going to use up our pantry soy milk from Costco and get more cow’s milk next week. I also feel like we have SO MUCH FOOD now that I am back from my trip. We have tons and tons of oats, bars, baked goods and bread in this house. And here are 3 things that came home opened too – 2 cheeses from EF and dough (from GH) 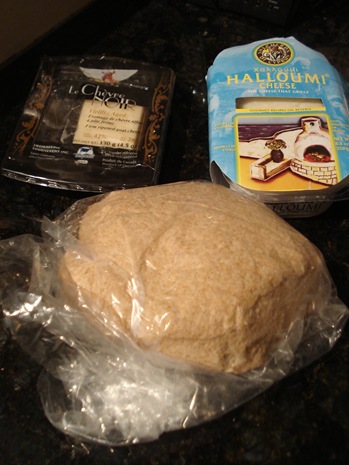 The only given at dinner tonight was baked potatoes from the 5 lb bag I got last week. I put them in the oven with a canola-salt rub for about an hour and they turned out perfectly crisp. We had planned on topping them with frozen chili, but I was having a major egg craving so I though that would be fun (it took some convincing of the husband, who wanted chili, but he decided it would be good). We also topped them with some shredded goat cheese, a jalapeno, and greek yogurt. 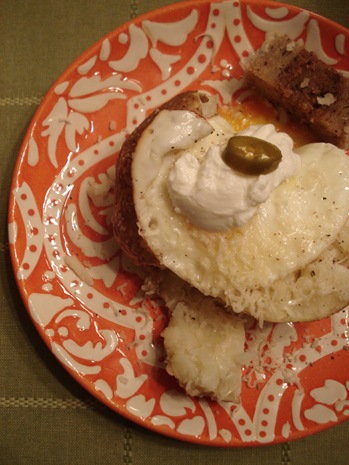 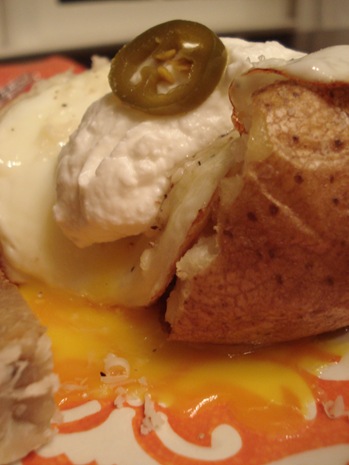 My new friend Kaitlyn, who coordinated the logistics of the Quaker weekend, is the Catch Up Lady. At dinner last night I learned that she eats ketchup on EVERYTHING and I had the idea to add some to my potato combo in her honor. (I had to put it in a bowl to heat it up – I hate cold ketchup.) It was good once I ate all the good toppings off 🙂 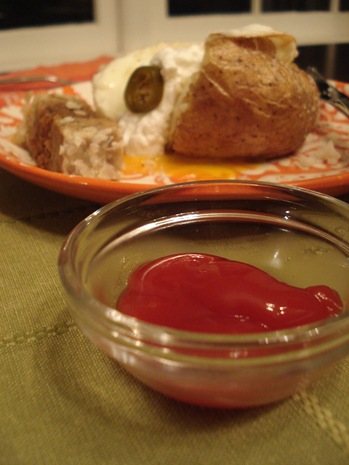 We had planned to have side salads with the potatoes, but neither of us were that hungry (damn snack!). But the husband did bring home this vegetarian loaf and I had a piece. 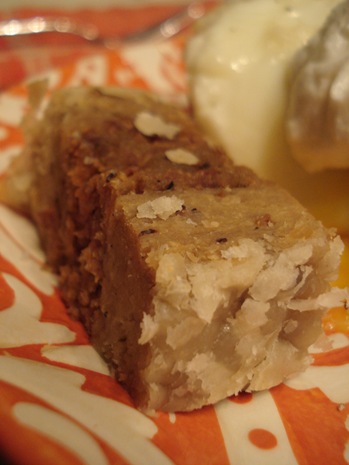 Don’t ask me what was in it because i have no idea!! It was a phyllo crust with a chewy grain layer and a sausage-like appley interior. 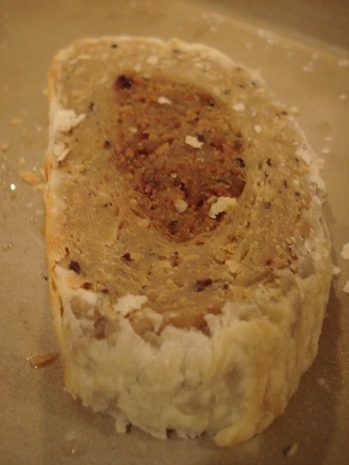 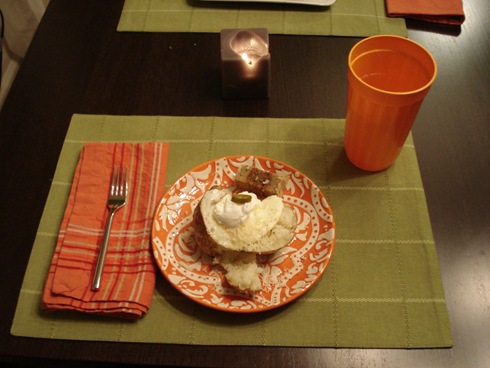 Lotsa orange around here! For dessert I had another 1″ square of pumpkin bar and a small piece of Madison’s pumpkin bark! 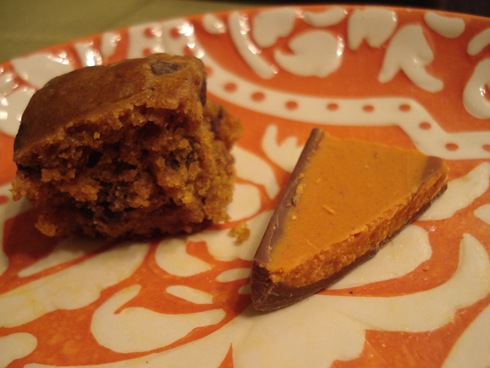 I am EGG-zausted. And totally thrilled that I took my organic test on Friday and don’t have to be on campus until 2pm tomorrow!!!!!!! I have a lot to catch up on in the AM though, so better get to bed. I think I’m going to sleep in a bit because I didn’t get enough this weekend.