You are here: Home / Motherhood / Birch: The Fourth Trimester 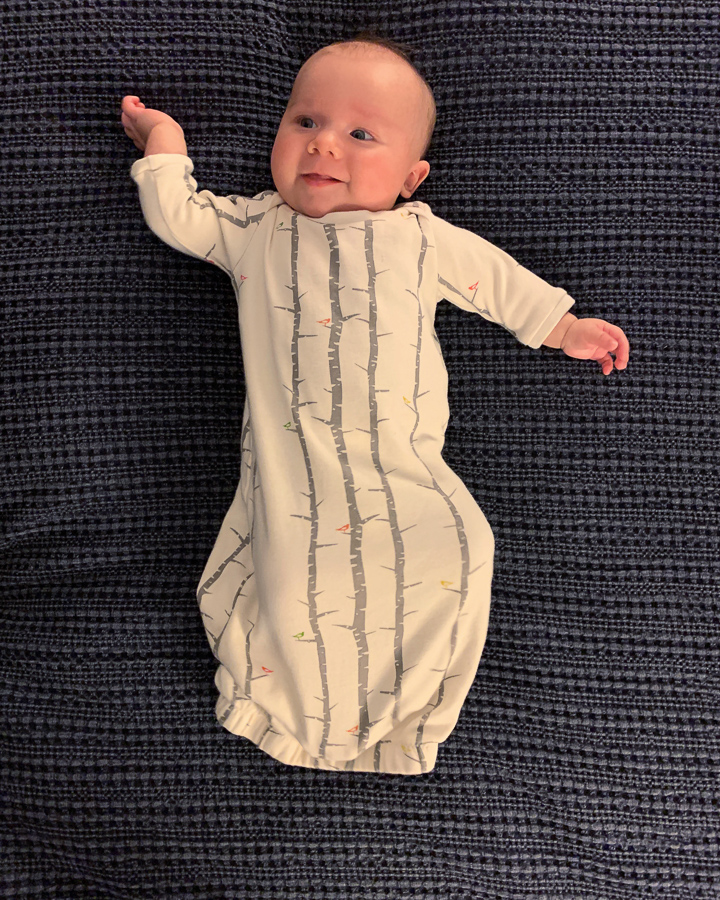 Look who is 3 months old!! Birch’s three month birthday was also sort of his one year birthday here on Earth because I am fairly certain he was conceived on January 29. Born and conceived on the 29th – how’s that for some more number fun for ya!

Look at him sittin’ up all by himself! 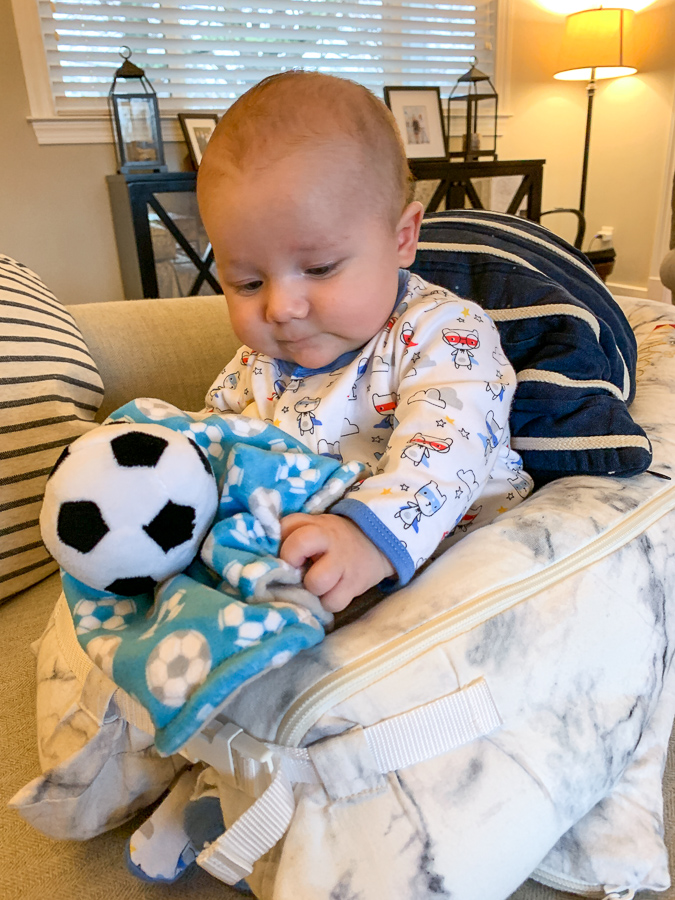 I swear he is a little genius who can already talk. Often when he needs me in the bouncy seat he says “Mama” (I am not joking!) and Thomas got him to repeat “I love you” a few times. He says “NA” a lot when he’s tired (aka “nap”). He’s sort of like a parrot who can mimic sounds! We know he’s not actually talking, but his little noises are so similar to real words sometimes. He’s doing a ton of cooing now, and his little laughs are the cutest ever!

He is a very smiley little guy and greets new people with big grins. He smiles at me before and after naps. A few mornings ago I opened my eyes to find him looking at me through the mesh of the Halo Bassinet and he broke out in a big smile. Such a happy little guy! 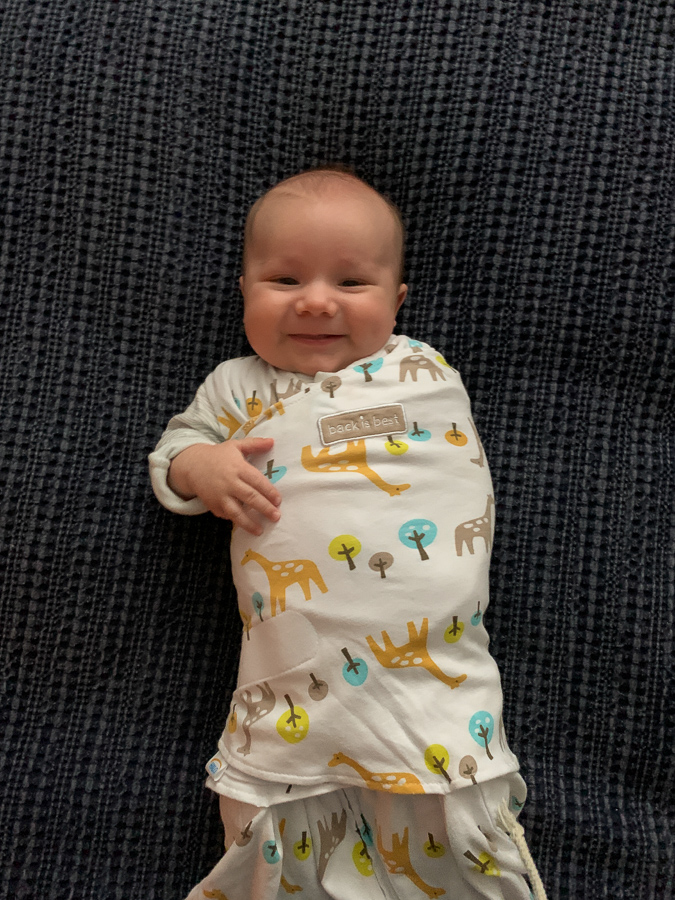 He is really into actually playing with his toys these days. He gets this determined look on his face and jangles the rings or whatever I have hanging on the bar for 15-20 minutes or so. He also LOVES his soccer ball lovey and Gertie the Goose! 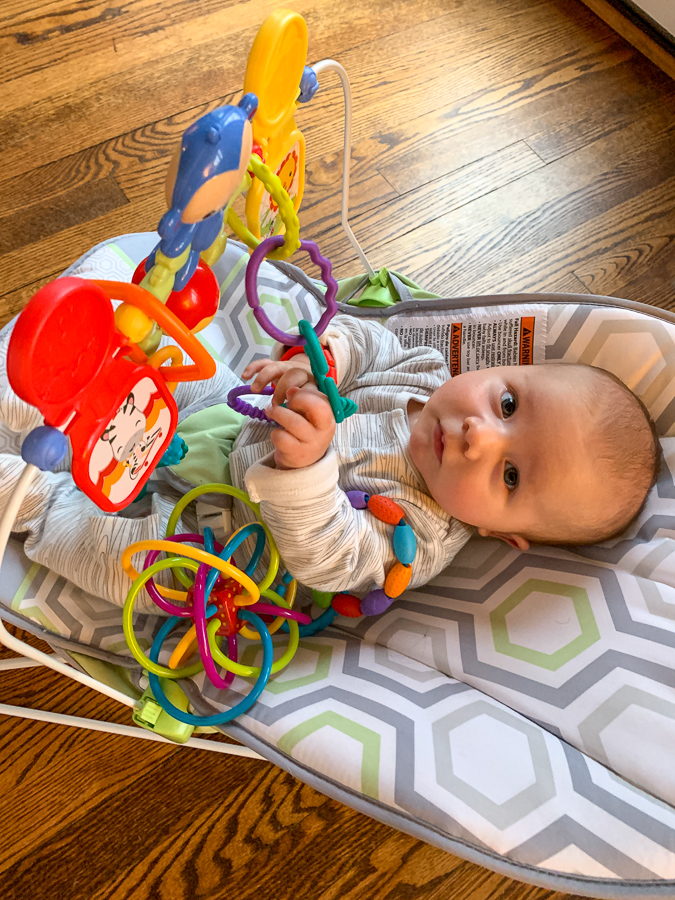 Every single time I put Birch down to sleep and he actually falls asleep a miracle occurs. One of the things no one tells you about parenting is that getting a baby to fall asleep is hard. They don’t like to sleep! (Some do, but most don’t.) Mazen needed all kinds of help to fall asleep, so whenever Birch falls asleep unassisted, I am amazed. Sometimes he does need patting, a paci, or several pick ups to settle down, but most of the time I can put him down “drowsy but awake” as the experts say and he drifts off. I try to put him down for a nap between 90 minutes and 2 hours of awake time, as that’s usually when he starts to get fussy. Sometimes he smiles his way to sleep and sometimes he cries a little and wants some help, but overall he’s not too hard to get to nap. I am especially amazed that he goes back to sleep on his own at night. Every time he does I let out the breath I’ve been holding and go back to sleep myself. He’s actually been so sleepy at night sometimes I can’t even get him to nurse on the other side.

Staying asleep is another story. Naps have been very hit or miss. He was miraculously doing 1.5-2 hour naps in the bassinet for a while and then suddenly those turned into 30-40 minutes. It’s been driving me a little nuts, but I knew we had it too good to be true. These short naps are what Mazen did his whole first 6 months, so I shouldn’t be so surprised they have returned. I’m wondering if I need to extend his awake time longer so he’s sleepier, but he’s fussy when I do that and seems to be tired at 2 hours, so I’m not sure! 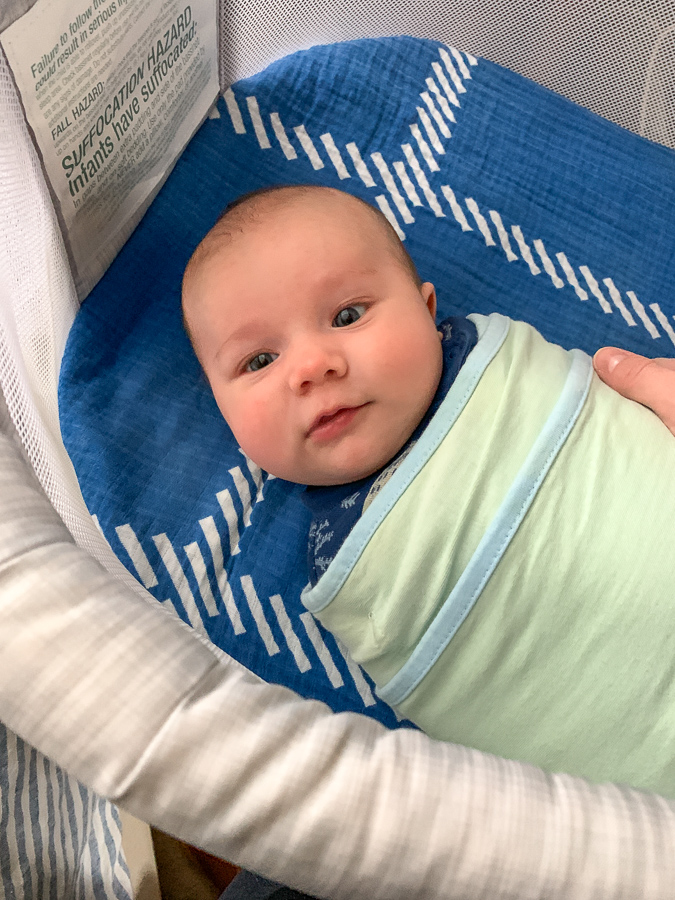 Night sleep is unpredictable as well. He has done some long stretches in the 7,8,9 hour range, but most nights have been ~5 hours + 3 hours or 5.5 + 2.5, with maybe an extra hour tagged on the end. On the worst nights I bring him in bed with me for that last stretch until the sun comes up and we snooze together. The nights we only have one wake-up are glorious! Thomas and I get in bed at his bedtime around 8:30 and I try to go to sleep by 9/10, so I’ve been getting pretty good sleep even with 1-2 nursing sessions. It’s been smooth sailing since we stepped out of that first month of every 2-3 hours. I’ve felt really well rested months 2 and 3. We will see what month four brings! (I’m looking at you four month sleep regression…!)

He’s been drooling like crazy, which several people have said is teething already. I find that hard to believe, however, his lower gums do seem to have a little white shape of teeth in there, so I think it’s possible he is getting those lower teeth sooner rather than later. 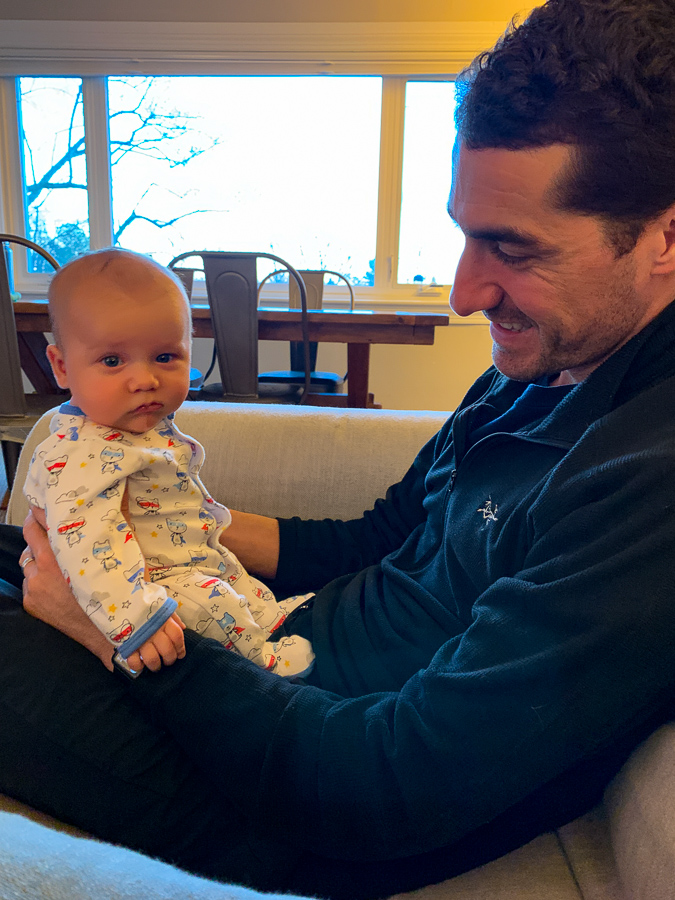 Right at 12 weeks old, he went from being a wiggly little baby to a very strong infant and almost rolled over! I immediately started to unswaddle one arm, and that has gone surprisingly well. Not swaddling is so much easier, so I’m hoping we will transition out soon. B does love his hands though, so I hope they aren’t too much of a distraction.

Breastfeeding is going well, and has gotten a lot easier than the early days. He’s reached the age when he can latch himself on, which is such a great contrast to those newborn days when you have to work so hard on the latch. He’s eating well about every 3 hours or so during the day. I think he’s still in the 50/60th percentile. I love watching him nurse, especially when he puts his hands on me and just nuzzles in.

How do you know when to stop pumping extra? I’ve been doing the first-morning-nap pump for two months now and have a good stash in my freezer. Should I keep going?! I would be nice to stop and one less thing to do, but I do love having a little fresh milk in the fridge at all times. But I also have a decent freezer stash – more than I ever had with Mazen because I like my pump so much more this time around. Advice? 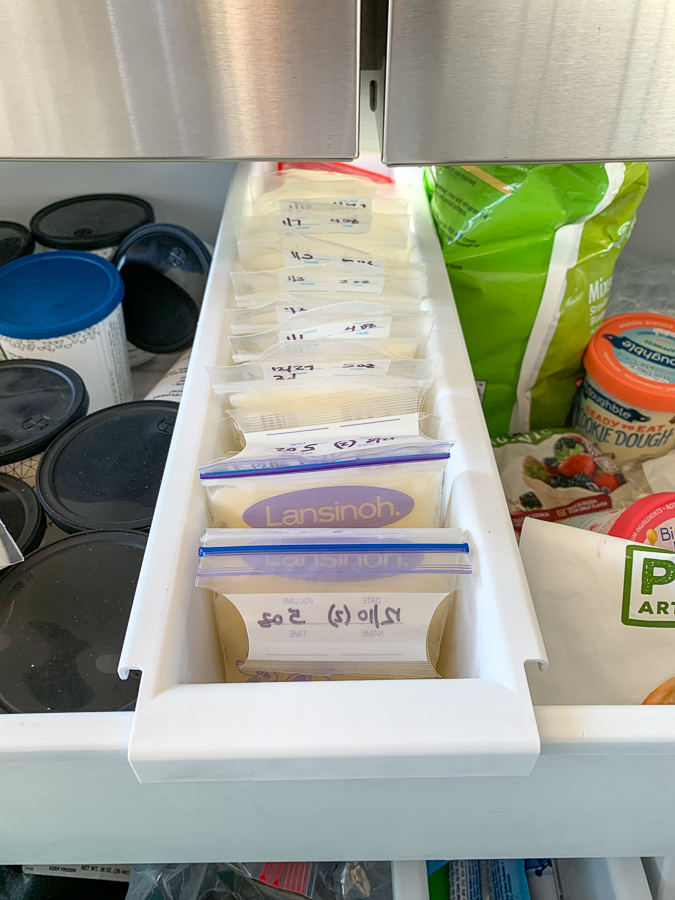 It is with bittersweet emotion that I tell you that I won’t be cloth diapering this time around. I had planned to wait until about the 2 month mark to transition over, but every time I thought about the cloth diapers I was filled with a little bit of doubt: the laundry, the fact that we use two different changing stations, the eventual mess. I kept hesitating to start.

And then I had a conversation with my friend Gwen about them and she was REALLY excited to cloth diaper. She asked me about my collection (Bum Genius Freetimes – they are the best) and if I would consider letting her borrow a few or sell them to her if I wasn’t going to use them yet. I thought the best thing I could do as a win-win was to gift her our whole collection, felt wipes, wet bags, liners and all. So I did. And she was more than thrilled. And that made me feel really happy and at peace with my decision. And that’s the end of that chapter.

And finally – I found a babysitter! I knew I needed one just for a few blocks of uninterrupted work time each week, but the weeks when Birch took good naps I kept procrastinating putting an ad out there. A friend of mine passed on the names of two UVA grad students who then referred me to our sitter who had two mornings a week free. I’m so excited to have some scheduled work time (or errand time or appointment time or gym time or me time!) especially because naps have shortened so much in the past two weeks that I was getting interrupted every single time I sat down to work. 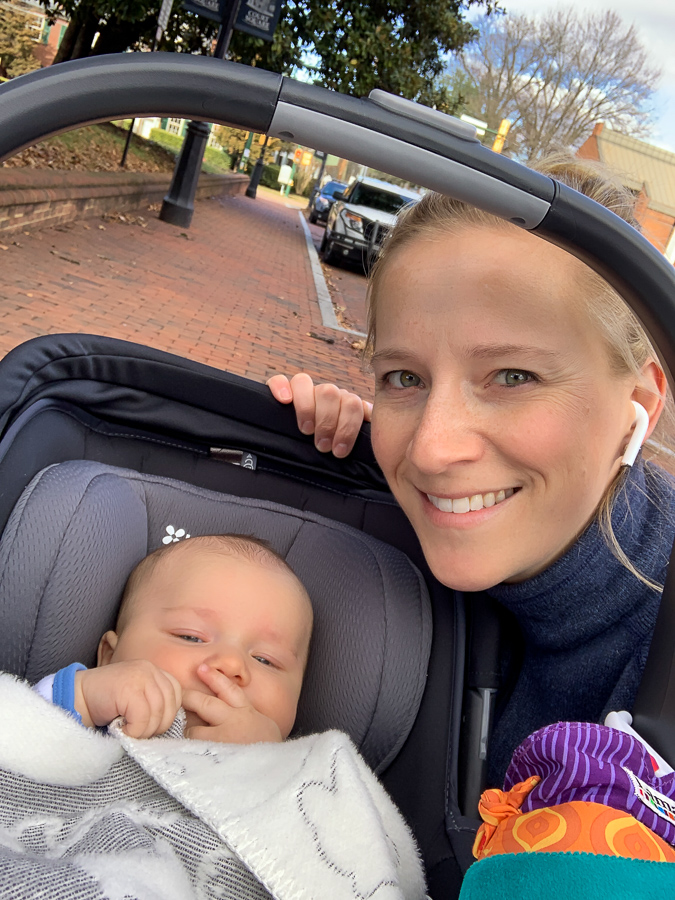 And finally, I found these pics of me! Everyone says B looks like Mazen and Thomas, but I can see him in these a lot too – especially the top left where I look like a boy! 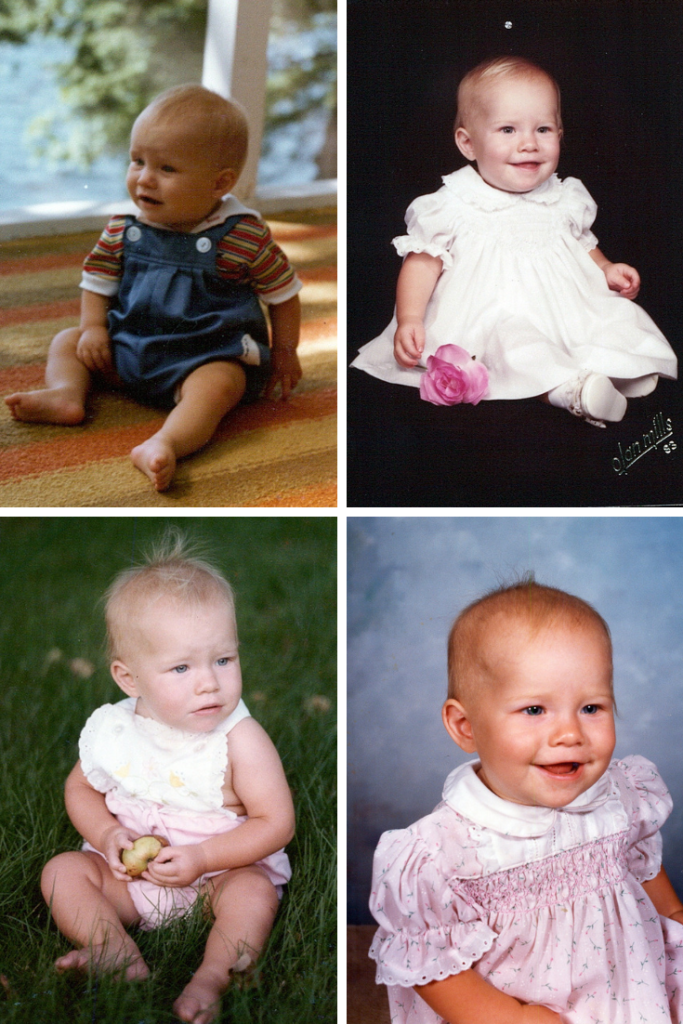