I have procrastinated writing any baby posts for the past two months (for some odd reason) because I’ve wanted to write about sleep. However, I think I wanted to have and end to the story first, which obviously will not come. Parenting is one never-ending journey! I’m planning to write about other milestones (eating real food, starting to move, etc.) in a six month post, but I have so much to say about sleep I had to make it its own post! 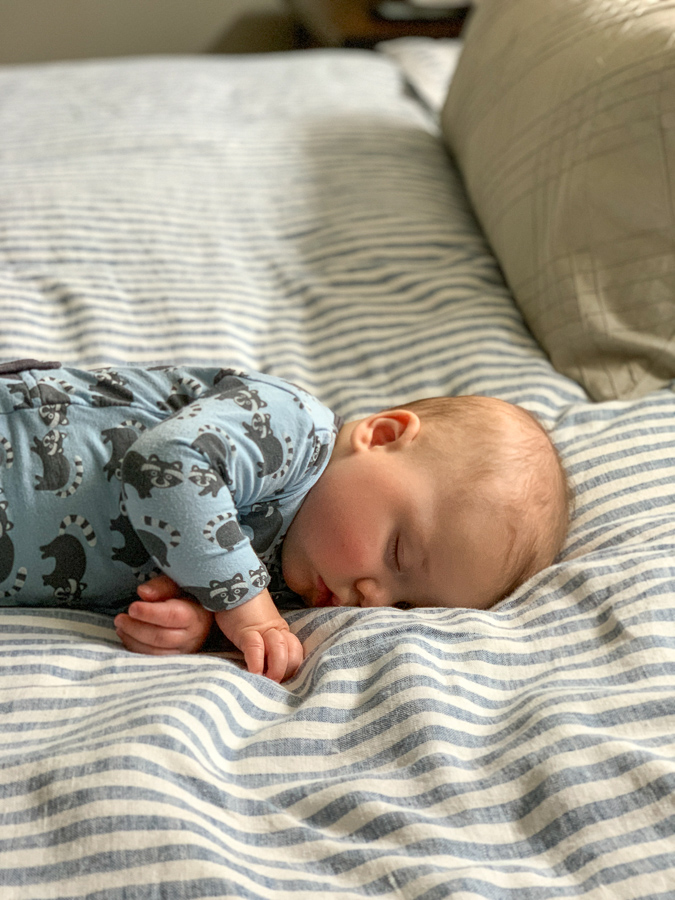 I did everything I could to avoid the four month sleep regression. You might recall that Mazen’s sleep was h o r r i b l e between 4-6 months, and so I followed all the “rules” to help Birch learn to self soothe. Of course we’ll never know if it was nature or nurture, but Birch has been a pretty good sleeper from about the one month mark on. I do think nurture has at least something to do with it. We practiced “le pause” and really paid attention to his cries and cues before rushing to the bassinet every night. (See Baby Sleep: Two Months In.)

At the four month mark he was sleeping 9-10 hours straight most nights!

And just as we thought we had escaped the dreaded regression, it began. Within days of Birch turning four months old, he learned how to roll over. This led to me taking away the Merlin suit that he was so cozy in and putting him into a regular sleep sack. (The Kyte brand gifted from my sister is my favorite!) I don’t think it was the sleep sack transition itself that led to the multiple wakes but him trying to practice rolling all night long. For a night or two I tried rolling him back to his back because I was nervous about SIDS. But I finally gave in and let him sleep on his tummy and he hasn’t slept on his back for a minute since! He’s a full-on tummy sleeper like me. But during those nights when I would roll him back OR when he would get to his tummy, he would wake up and fuss.

ALSO, in an effort to get longer naps, I started nursing him before his naps. I “knew better” than to nurse him totally asleep, and I made sure he opened his eyes before putting him in the crib, but I think this still created a sleep association that was timed perfectly with the rolling.

So when he would be totally awake and upset from the rolling, nursing was the only way I could calm him down enough to get back to sleep. I then reinforced this at naptime! So basically this was mostly my fault. I knew I had to un-do the nursing association and remind him that he already knew how to self soothe.

After he learned how to roll over I felt that his bassinet was probably too small and also contributing to mediocre sleep and we switched to the Lotus Travel Crib in our room. If he hadn’t slept well in the Lotus I was considering just moving him to his crib for nights, but it’s such a hike to the nursery from our room that I wanted to hold off if at all possible. 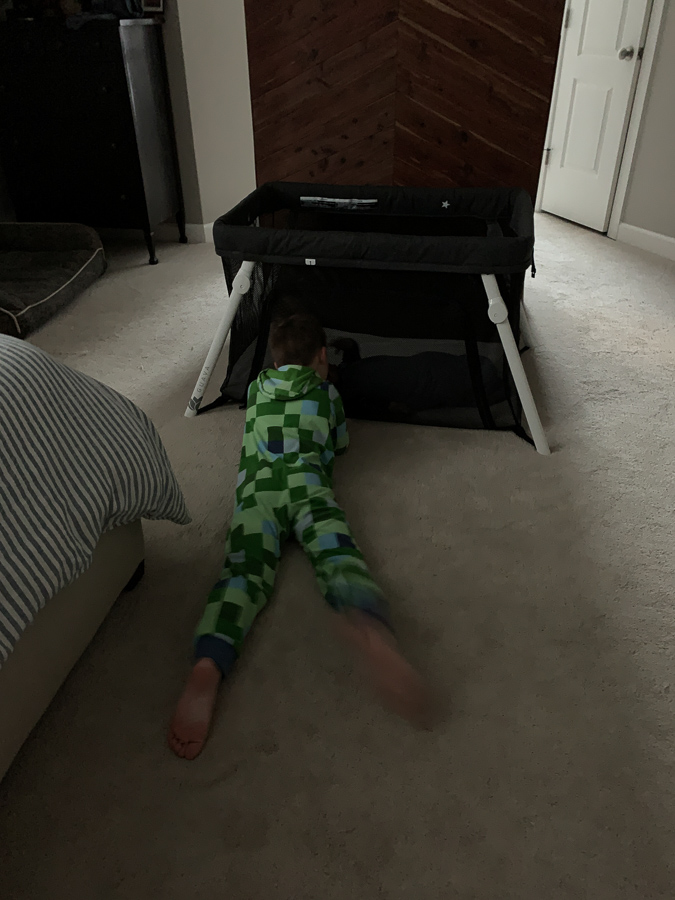 We had quite a few choppy sleep weeks in a row and then finally feel like we’ve come out on the other side. So what fixed it?

-He’s 100% in sleep sacks. I’m actually SO glad to be done with swaddles and suits.

-When he wanted to nurse at night I turned on all the lights, changed his diaper first to delay the nursing, and then did my best to keep him awake by talking to him (sorry sleeping Thomas!) When he was done eating we went back into sleep mode. This goes against your instinct not to wake them up too much, but it’s the best long-term solution.

-And I stopped nursing him to drowsy before naps and got back on the eat, play, sleep routine train. It was dumb of me to ever veer away from that!

We are now back to one wake or a full night straight through!

I’d say about 50% of the nights he nurses between 3 and 5. And the other nights he sleeps a whole night (9-10 hours). On the nights that he has an earlier bedtime (no late afternoon nap) he tends to want to eat between 3 and 5 but then he will sleep until 7ish. On the nights that he has a late afternoon nap he goes to bed later but he sleeps all night and will often wake up closer to 6:30. The second option is the one that I prefer, but that afternoon nap and bedtime are 100% based on how naps have gone that day. 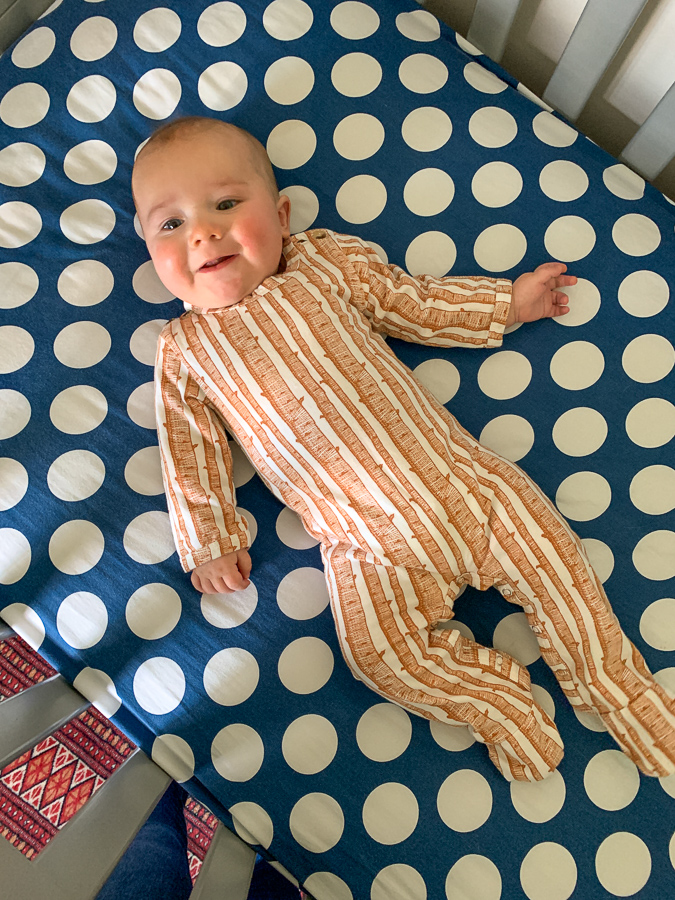 Naps In The Crib

Speaking of naps, he has been napping AMAZINGLY well. (Knock on all the wood). Birch takes all of his naps in his crib in his nursery. I definitely do want him to get used to his crib for when it’s time to move him downstairs at night. I have no idea when that will be. I am thinking around the 9 month mark, but I once said the 6 month mark and now here I am not ready. It’s definitely more about me than him!

On typical days I put him down 2 hours after he wakes up and he will sleep for 2 to 2.5 hours!! Amazing since Mazen never slept more than 39 minutes until he was six months old. I aim for nap #2 about 2 to 2.5 hours after the end of the first one. Sometimes he will do another 2.5 hour one, and sometimes it’s more like 1.5. The shorter second nap means he’ll probably do a late afternoon third nap and if he does a longer second nap he will skip his third one.

So days are either:

I aim for 2 to 2.5 hours of wake time between naps. Occasionally he fights a nap or wakes up early, which I think is related to teething or some other comfort problem, and we have a 1.5 + 1.5 + 1 or something. We just roll with it and the clock starts over for a 2 hour wake time. 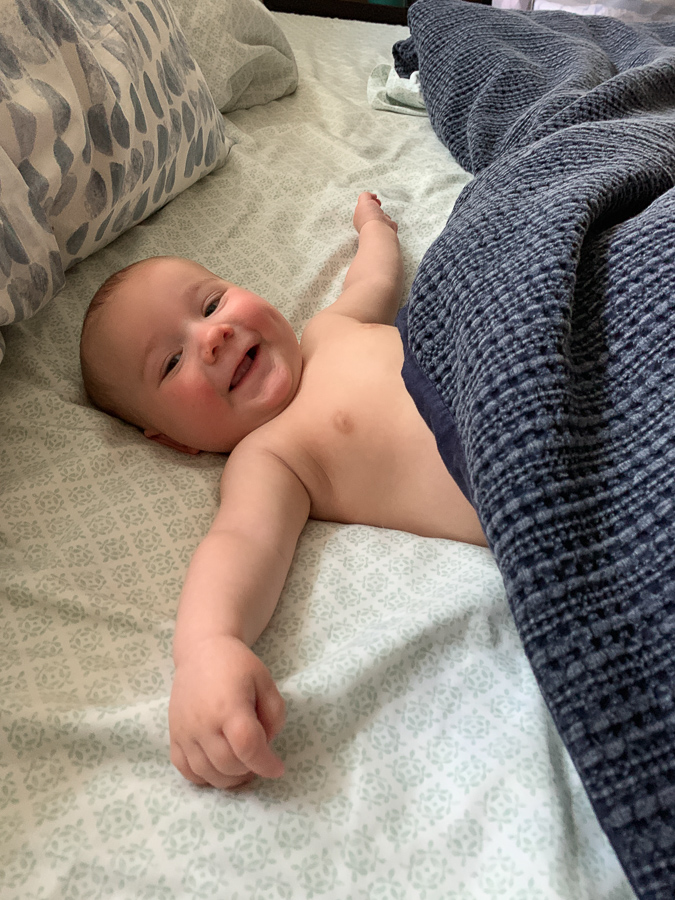 Whenever I mention Birch doing a long night someone always asks me what I do about engorgement. I have this little silicone hand pump and I keep it in my night stand. It works by suction only, and it’s perfect if you just want to take the edge off. I sometimes wake up before Birch and will pull off 3 ounces before he nurses (and he still gets plenty!) I think once he starts to sleep all night, every night this will get better.

Little Z Sleep on Instagram is an awesome account to follow! Becca is actually local to Virginia – in Richmond – and a friend of mine bought her newborn sleep program and recommended her to me. She has SO many great tips on her feed (like her question Tuesdays in her stories!) and she has programs you can buy if you want an in-depth lesson or personalized consults. She ALSO has a terrific podcast! Highly recommend! She’s the one who talked about making sure eating time was awake time to break the association at night, and that was such great advice. It worked for us!