You are here: Home / Motherhood / Baby Sleep: Two Months In 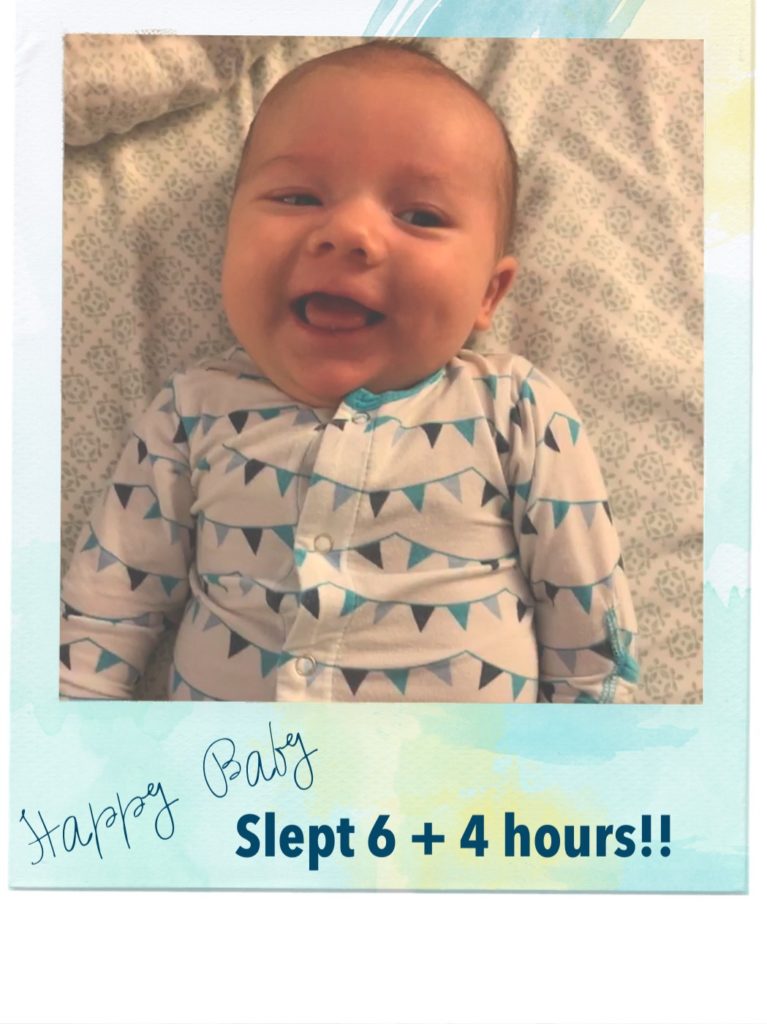 B had his best night of sleep to date this week! 6 hours plus 4 hours with just one nursing session in between. I think he missed his bassinet while we were gone. He wasn’t crazy about it during the first month when he slept in the rock and play, and I was regretting the expensive purchase. But we tried the bassinet again at the one month mark, and now I am SO glad we bought it! I love that he’s right next to me in both proximity and height. He seems to like it too, and he wiggles himself over to the mesh side so he’s as close to me as possible. It’s quite cute!! 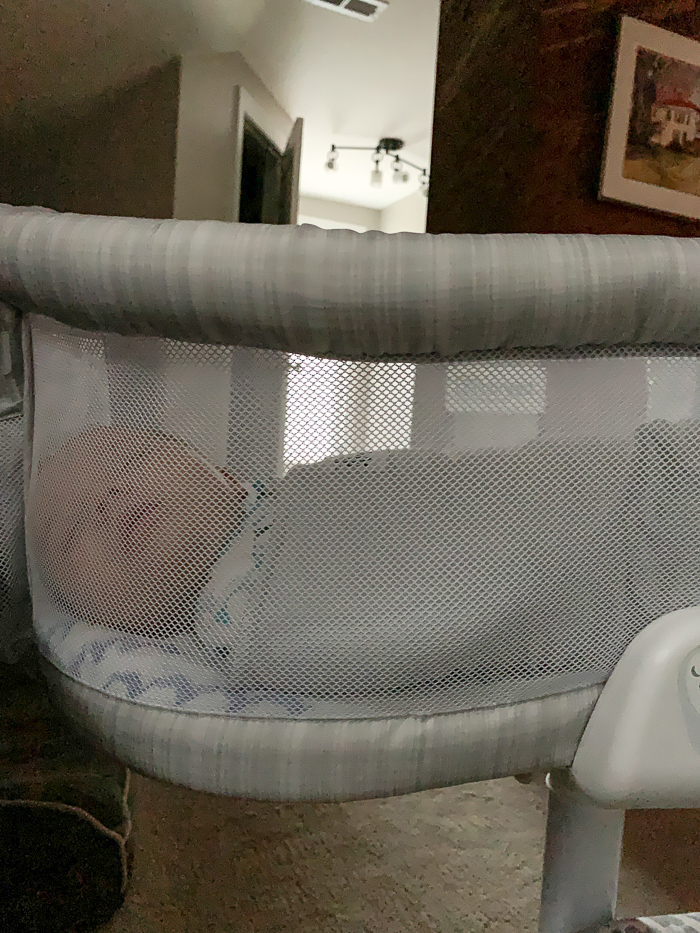 A few people asked me about tips for sleep yesterday on Instagram. I feel like it’s so subjective that I don’t know if anything I say will work for another baby, but I figured I would still share a few things we’ve been doing.

We try to keep him up for a little more than 2 hours before an 8:30 bedtime. So we try to end the last nap by 6:30. This doesn’t always happen, and sometimes he sleeps into the 7:00s and has luckily still gone to bed at 8:30 or 9. We don’t want to wake a sleeping baby. But it’s something we aim for that we think has been working. The 8:30 bedtime just kind of happened, and I think now his body clock remembers because he goes down really well at this time almost every night.

Most nights he does a 4-6 hour stretch (typically 5.5-6) and then a 3-4 hour stretch for the second one. When he wakes up, Thomas changes his diaper and brings him to me and I nurse for about 20 minutes (10 per side), re-swaddle, and then place him in the bassinet. Some nights he grunts around for 10 minutes and other nights he goes right back to sleep. I will say that occasionally he has woken up at the 2-3 hour mark and he’s gone back to sleep after Thomas picks him up and puts him back down, fairly quickly. I try not to nurse him if it’s been less than 4 hours, but of course I would if he did not want to settle back down.

After his last nursing session, we check diaper, swaddle, walking around with him on our shoulder for just a few minutes and then place him in the bassinet. He’s usually still awake but very drowsy. Sometimes he wakes back up quite alert or never gets drowsy and I fear we’re going to have a hard time getting him to sleep, but by some miracle he eventually goes to sleep on his own. See below! 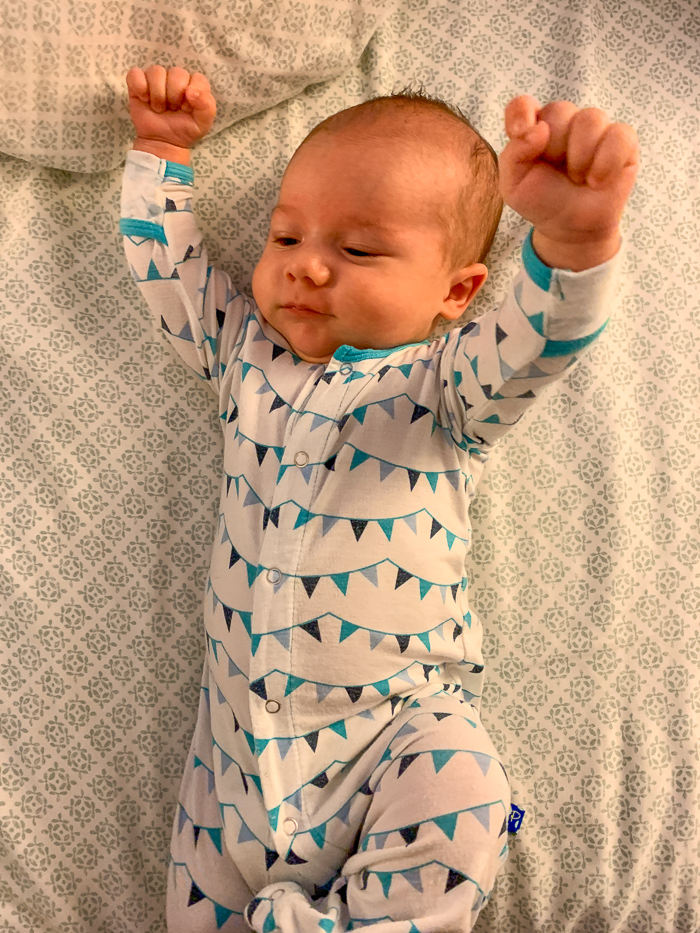 I think I accidentally sleep trained Birch a little one night when I was just soooo exhausted I put him down instead of rocking and shushing him and laid down myself “just for a few minutes.” I would wait for him to cry and pick him back up for more soothing. He was “fussing” — grunting around and making lots of noises — but not crying. And then I woke up a few hours later! I realized that his noises were not actually a sign he was unhappy but that’s just how he settles himself down for sleep. I am not sure I would have realized this otherwise because he sounds sort of uncomfortable and you might be tempted to pick him up (again, he’s not crying – just making noises). He does it half the time when he falls asleep and he never cries and wakes up totally fine. I was never able to put Mazen down “drowsy but awake” but that has worked for B ever since. So my only advice is to just experiment with not picking the baby up until he/she is actually upset. And even then just pause and observe for a minute to make sure they really need you.

But again – I really don’t know if all of the above was actually what worked or if we just got lucky! And as we all know, things might change tonight. Fingers crossed!

Naps, on the other hand, are a total wild card. Here’s the nap times we’ve been getting in various places:

I have replicated our nighttime set up as described above, minus the dark room part because we don’t have blackout shades, and he has fallen asleep much like he would for nighttime only to wake up after only 20 minutes or so. I have no idea why? I never expected to have a baby who napped well because Mazen never did, so I’m just rolling with the great nighttime situation and doing lots of baby wearing for now!

We follow the eat –> play –> sleep routine where eat + play is about 90 minutes (sometimes closer to 2 hours) and sleep is usually 1.5-2 hours (because I’m usually wearing him). He usually goes through 4 cycles a day, unless he takes an unusually long nap.

Also: we use a paci for naps, and B LOVES his hip hop music! It’s much more pleasant than white noise for me too 🙂 I dance around with him till he’s ninight. 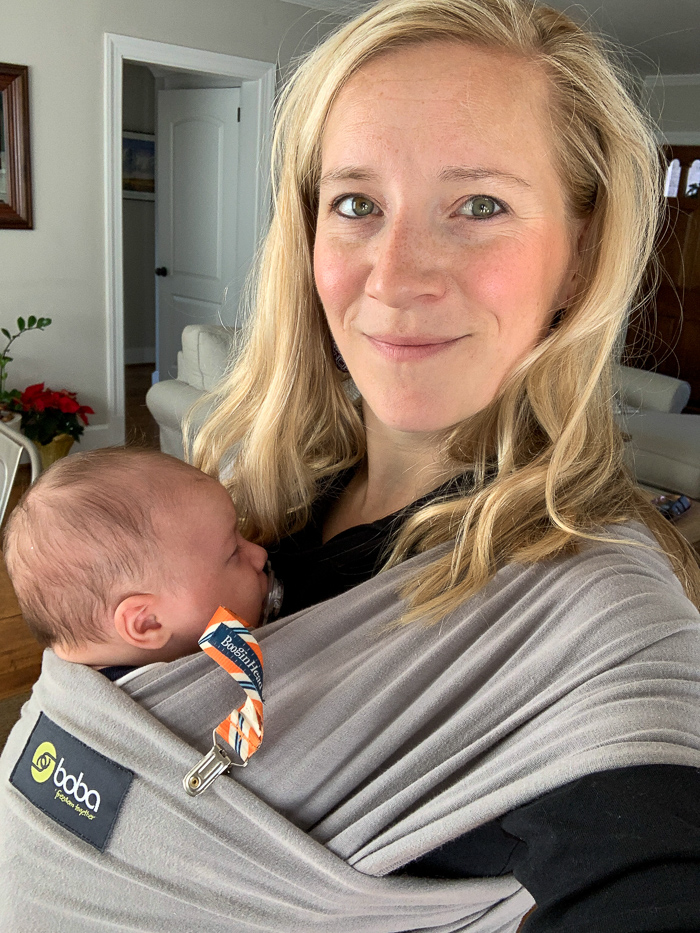