You are here: Home / Lifestyle / Beat.

Man am I tired!! Today was just go!go!go! Quick post, possibly a bubble bath!? But probably just a quick shower and hitting the sack.

Girls on the Run “is so much fun” (as the post-practice cheer goes 🙂 ) I am volunteering at a small charter school, and we have a cute group of girls. I’m in charge of bringing the snack on Wednesdays (fruit) so I brought a bag of delicious oranges! I had one, but obviously wasn’t able to take a photo of that. It was a GREAT orange! After our snack, warm-up and lesson, we took the girls down to the field for their run. They were paired up and each had to do a combined 2.5 miles (lesson: promises and supporting and encouraging one another). I thought most kids liked running, but they were dragging along! I ran 12 laps (just over a mile) with them and had them holding my hand, squealing, pulling at my clothes – it was quite interesting! One girl said as soon as I got there: “I’m so glad you’re my coach.” It was cute

After GOTR, the coach and I went for another 2.5-3 miles together. She wants to run more and I would love more than a mile workout on Wednesdays, so it was really nice to have new scenery and company for a run. Then I was soaked (and freezing) but dried off in the community college bathroom blowdryer. Next time I’m going to change into dry clothes despite being sweaty. I don’t think it’s really worth showering at the Y since Micro isn’t a big deal to go sweaty.

I also picked up dinner at a deli I’ve been wanting to try. I wasn’t really that impressed, although they did have whole wheat bread. I ordered honey roasted turkey with tomato, lettuce, banana peppers, cuc, pickle and mustard. It had potential, but was completely soggy by the time I opened it up 🙁 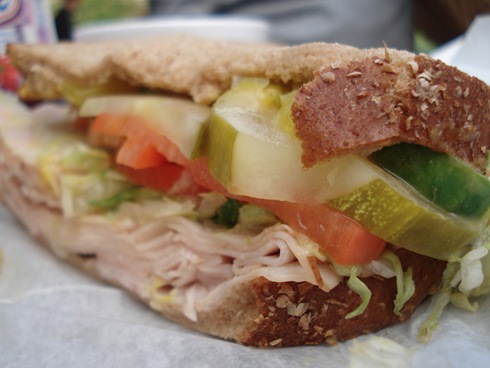 It was a good size though, so it was pretty filling, esp. with all the veggies. 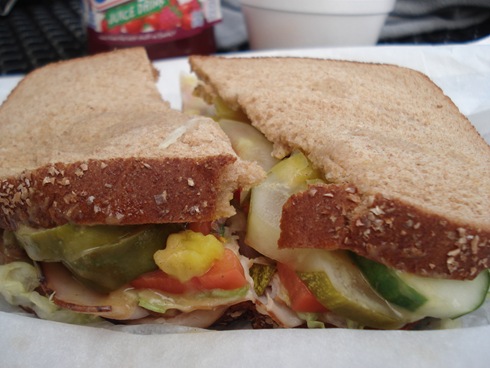 I also had a tiny fruit cup on the side – 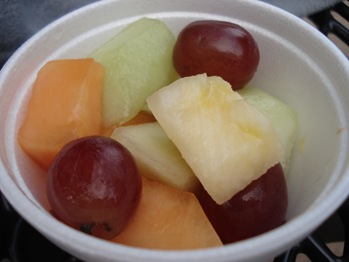 And a diet Snapple for tongue excitement 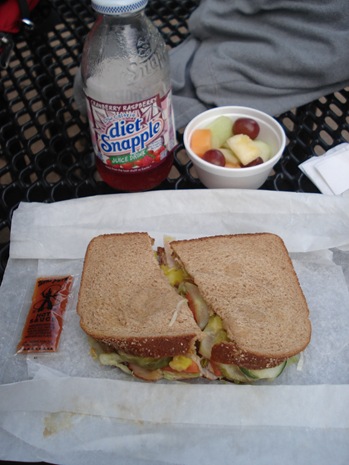 Micro lab went pretty well tonight, although it was long and I didn’t get home until after 9. But next week we have an easier week! Yay!

I was SOOO THIRSTY when I got home. We’re not allowed to drink in the lab so I left my water bottle (empty) in the car and only had a sip of water and Snapple from 5-9pm (and after my workout). I just chugged a big cup of water.

And had a fun banana-PB-GoLean Crunch snack! I’m being encouraged to eat bananas since we have the huge Costco bunch. The husband has had FIVE AND A HALF bananas in the past 2 days!! I think one per meal! 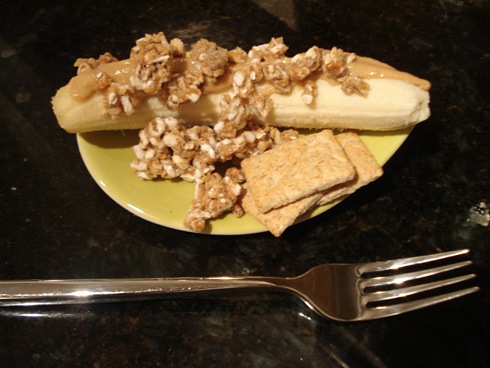