You are here: Home / Lifestyle / Afternoon Has Broken

I love mornings with my new little friend. I can generally count on a nap in the Boba wrap while I make and eat breakfast, get my post and computer work done for the day and clean up the house. I feel energized, well rested and excited for the day. Afternoons on the other hand…unwind. 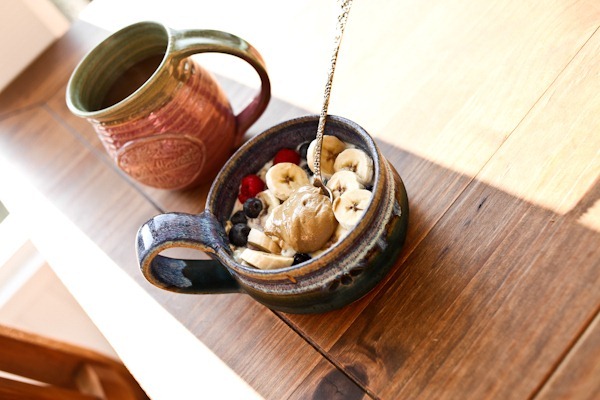 Welcome back programmable coffee maker!! We haven’t been in a regular coffee habit since the bakery opened and Matt started drinking his 5 cups there. I didn’t see the need for me to make coffee everyday just for me and since I had switched to decaf anyways, I just cut it out or did the occasional french press or cold brew in the summer. But fall = coffee cravings, so the coffee making machine back! Still using decaf (Shenandoah Joe Mexican Organic Decaf). 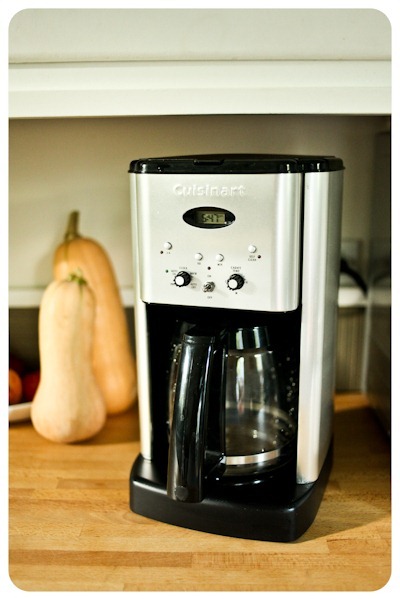 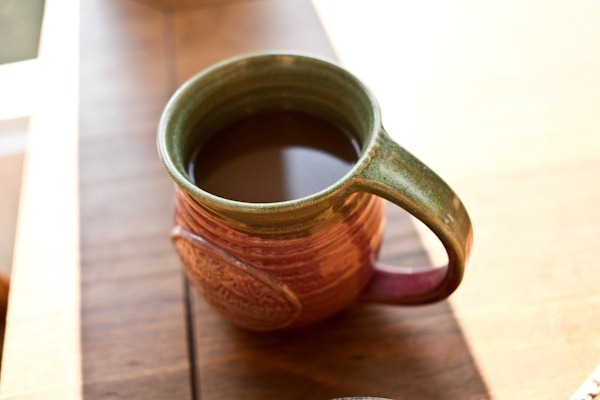 Since Matt had to work all day today, I made breakfast the night before – overnight oats! 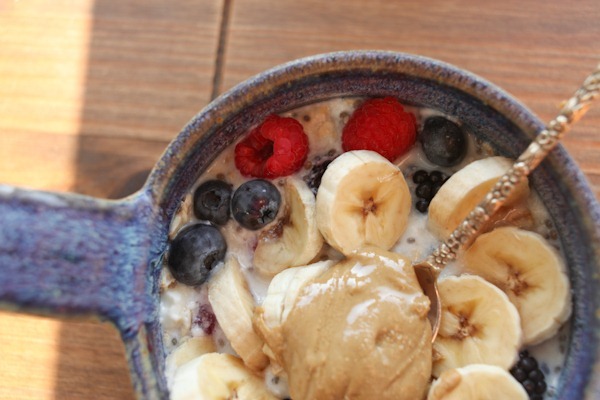 Filled with fresh berries and banana and topped with sunflower butter in the morning. 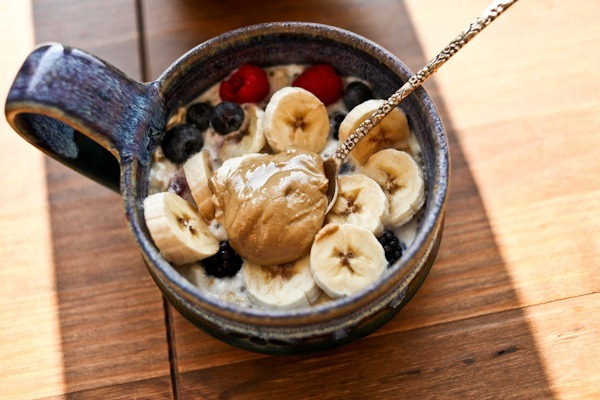 A short staffed day plus a ginormous baking load meant we had triple the bread to bag, so I volunteered to come in and help out – with as many hands as I could offer. 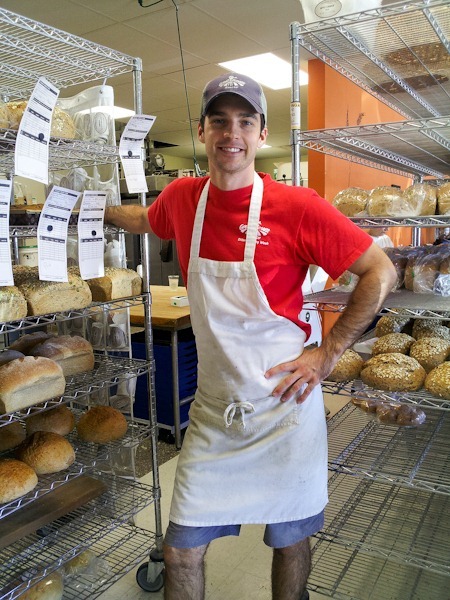 Baby fell asleep on the drive down, so I was able to work hands free for a while… He is pondering the meaning of life in his dreams. 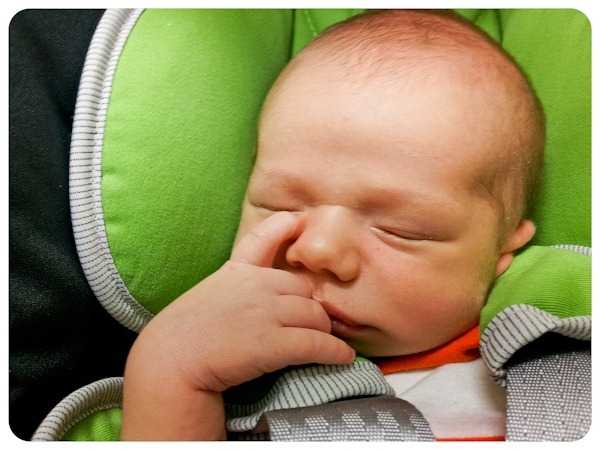 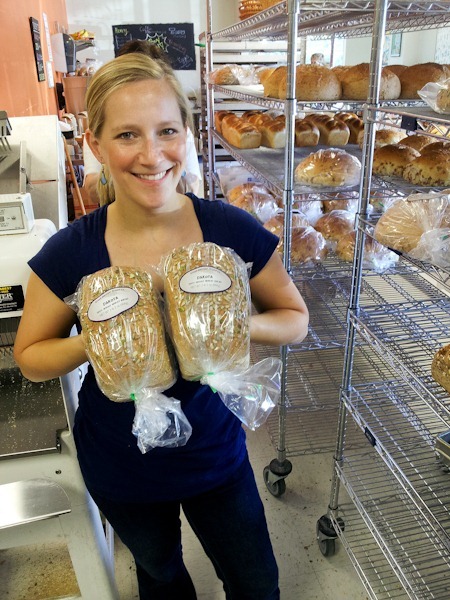 We put some paper up in the office window to make a breastfeeding center : ) 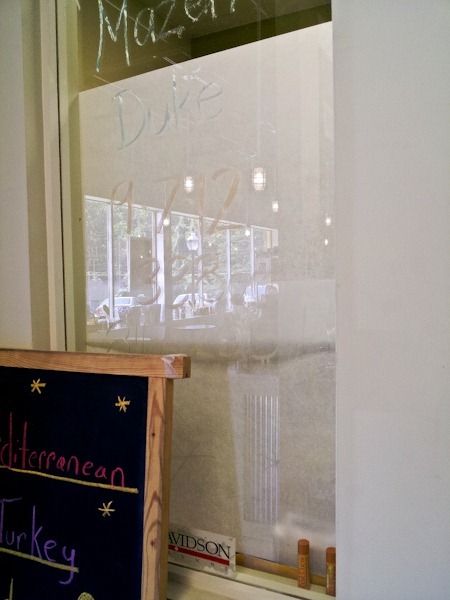 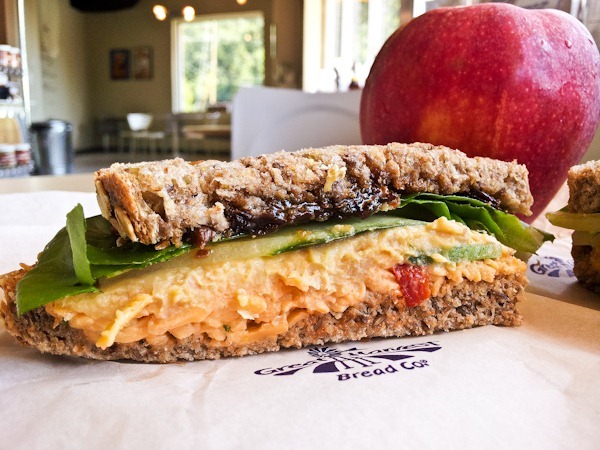 Pimento cheese and hummus sandwich!! And a huge apple. 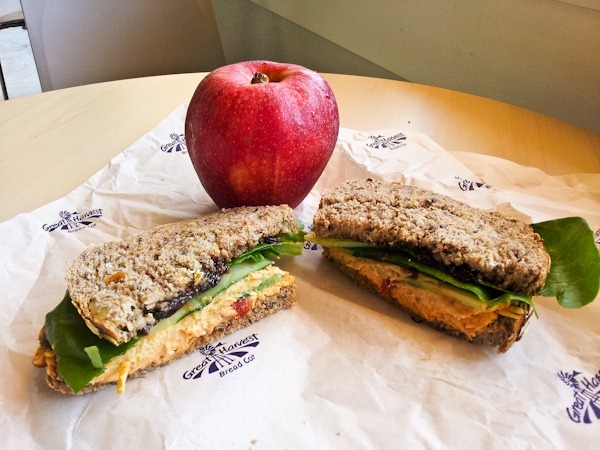 And then I went a little crazy on the sweets board! SO GOOD! Especially the oatmeal raisin cookies… 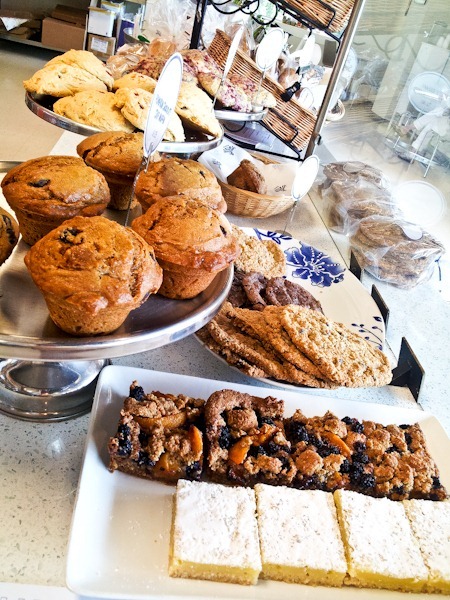 Maze went down (up?) for another nap in the wrap while I finished up in the afternoon. 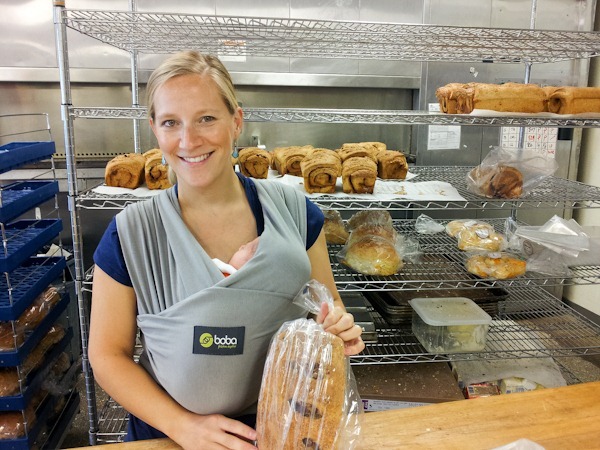 When we got home, we were both exhausted and had a few hours of crying and fussing. As the books predicted, his fussing has definitely increased now that we’re in week 3. I hear it peaks at week 6 and am kind of scared already…  I had hoped to take a nap, but it just didn’t happen. 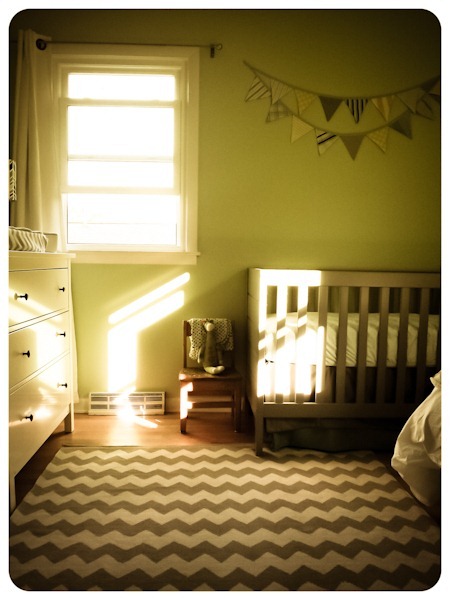 When dad came home we were both glad for his attention 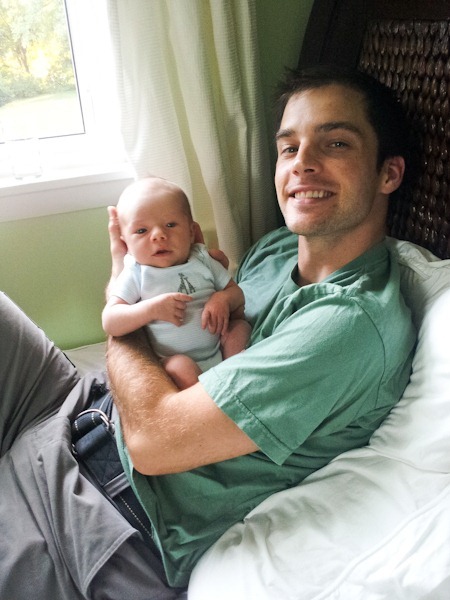 Our friends Seamane and Rob came over for a Friday night treat. They asked me a few weeks ago what drink I was looking forward to tasting the most and I responded with a “Big juicy red wine.” That’s exactly what they brought over! The Earthquake Zin. 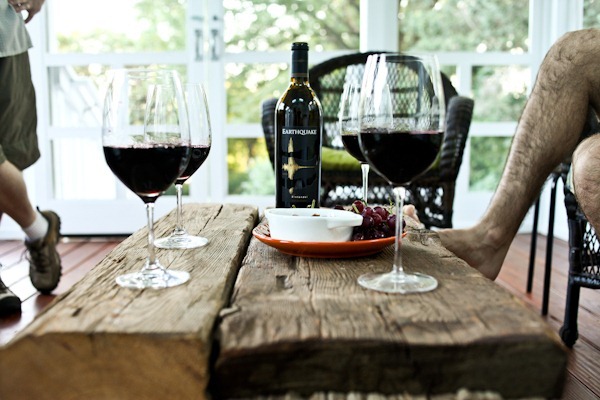 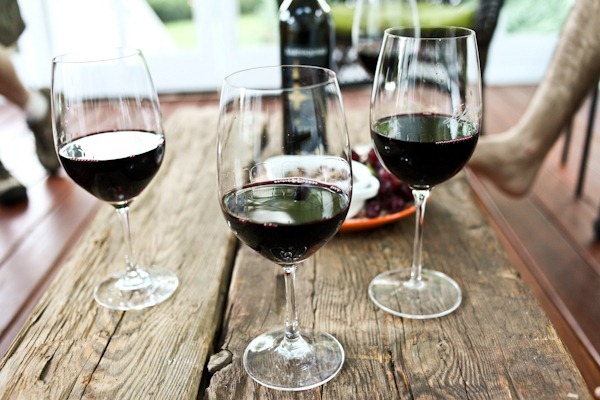 I put out some appetizers and snacked away 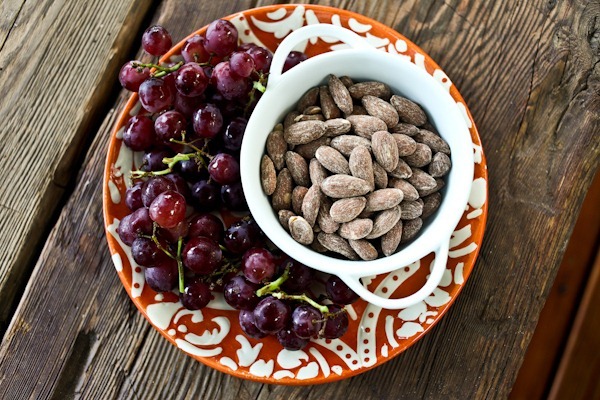 Maze likes cocktail hour as much as we do! 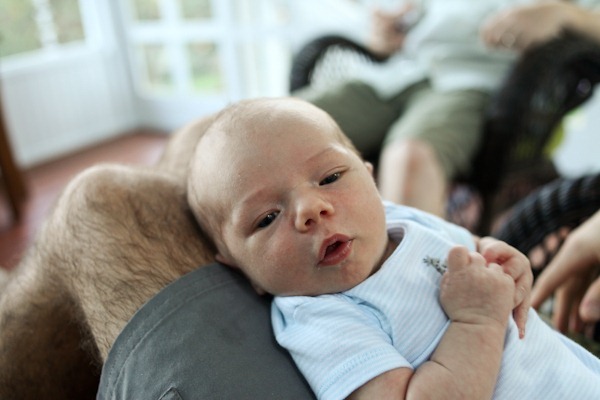 For dinner, we had a pizza planned and asked S + R to join us. Despite having our hands full, we are also eager to enjoy the pleasures of life again, including entertaining friends! 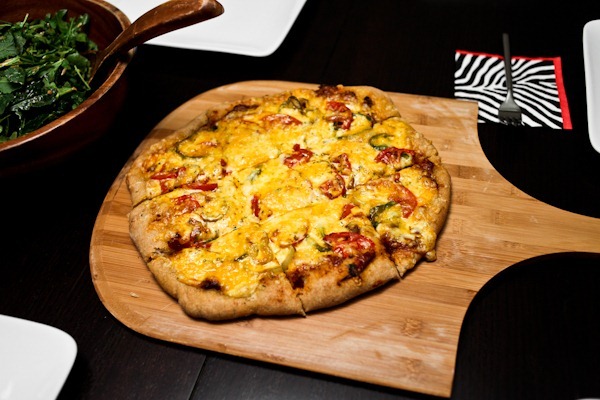 Matt made his whole wheat pizza dough recipe earlier in the day, and we topped it with our canned tomato sauce, peppers and lots of cheese 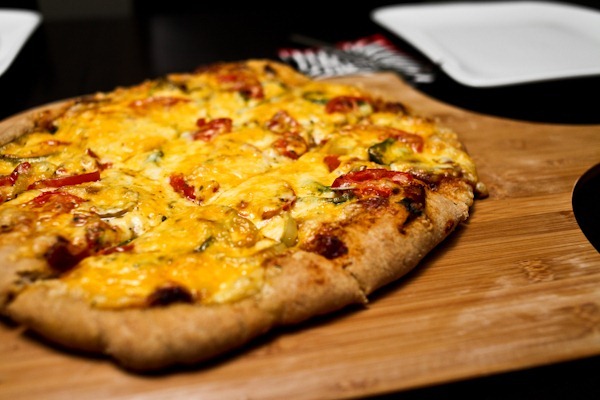 Baby Kale + arugula salad on the side – smothered in Annie’s Woodstock and sunflower seeds. I’m all out of Woodstock already and must get more! I am also obsessed with this baby kale mix from Earthbound Farms. It’s tender but chewy and so much better than regular spring mix! 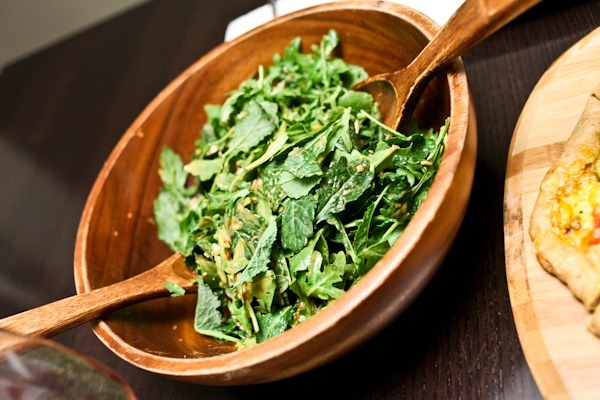 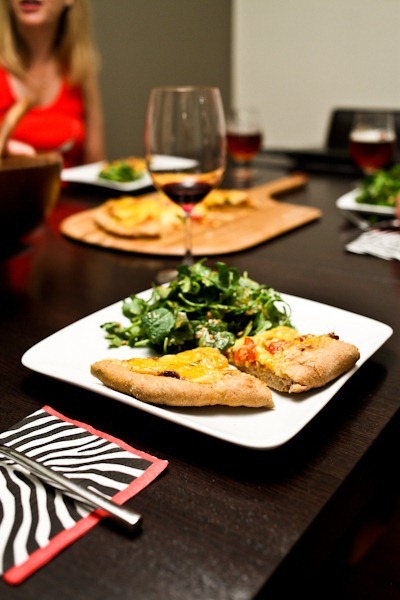 First we discovered that everything in our freezer was melting. I have SO MUCH FOOD in there right now it broke my heart. After taking a handful of temperatures, we concluded that the food was still safe to consume (everything was at or just above freezing and not in the temperature danger zone of 40-140*) but I’m sure we will have some serious quality issues

this !
I had to dump out a whole carton of ice cream that was melted into soup (but not without eating a few spoonfuls first – I love melty ice cream). Heartbreaking when this happens, and it seems to happen to us 2-3 times a year no matter which kind of freezer/house we have! Just bad luck.

Then the little one decided to fuss fuss fuss. I had no idea getting a sleepy baby to actually go to sleep would be so hard!! He seems to fuss and fuss and then we do something JUUUST right and he is out like a light. The problem is figuring out what that one thing is! We will survive….