You are here: Home / Exercise / Adventures In Fitbitting 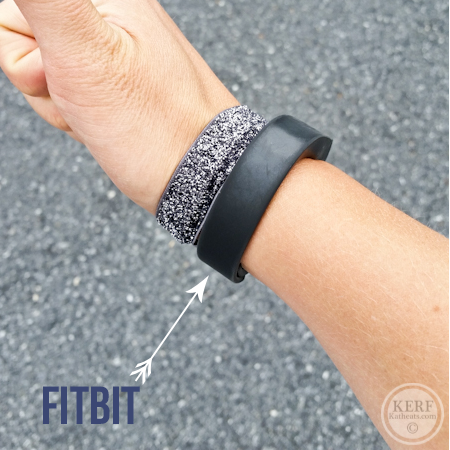 As someone who loves number crunching, I’ve been intrigued by the activity monitor industry. I almost bought one a handful of times but kept shying away. One day I struck up an online conversation with Theodora about her Fitbit Flex and asked her how she liked it. She had used it for a while and got tired of it, so she offered to let me borrow it for a few months so I could test it out. (I plan to buy her a new one if it gets damaged or too worn out.) So far I don’t have any plans to send it back : ) I don’t plan to wear it forever, but it’s been a fun addition to my mom-on-her-feet life.

The generic goal set is 10,000 steps, which is somewhere between 4 and 5 miles, depending on your stride. I have found the Fitbit to actually underestimate miles when compared to a GPS app on my phone or Garmin. One time I tracked a run on both and my app said 4 miles while the Fitbit said 3.3 miles. I’m more than happy to have it underestimate — that’s way better than overestimating! The only time I found it to be falsely tracking steps was when I was swinging in a hammock at the beach 🙂 I have also noticed that it doesn’t track steps when I’m on the stairmill – I’m not sure why because I’m not so bent over that I’m taking all of the shock out, but my friend said that could be something to do with it. So overall, it’s not 100% accurate, but I don’t really need it to be. 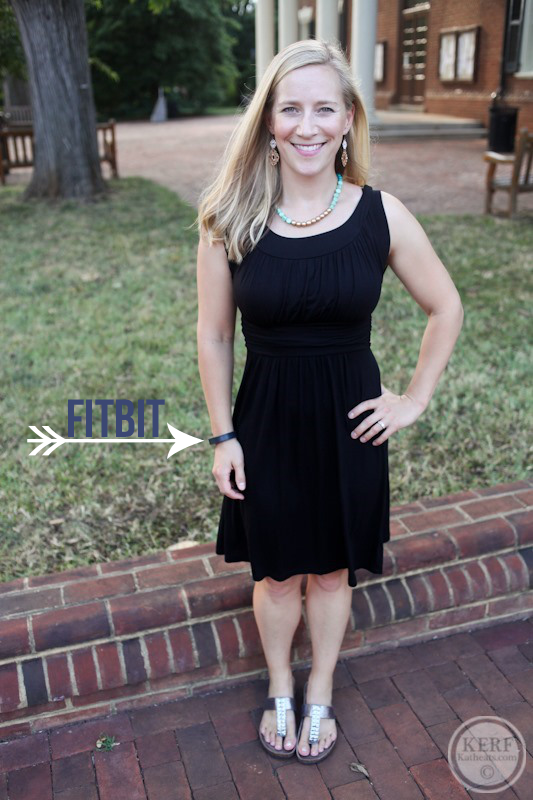 My average daily steps (including an average workout and walk to and from the gym) are around 12,000.

One Saturday I hit 18,000 steps without a workout – I just did a ton of walking that day!

My lowest day to date was about 5,000 steps, which reflected a 6-hour car trip. 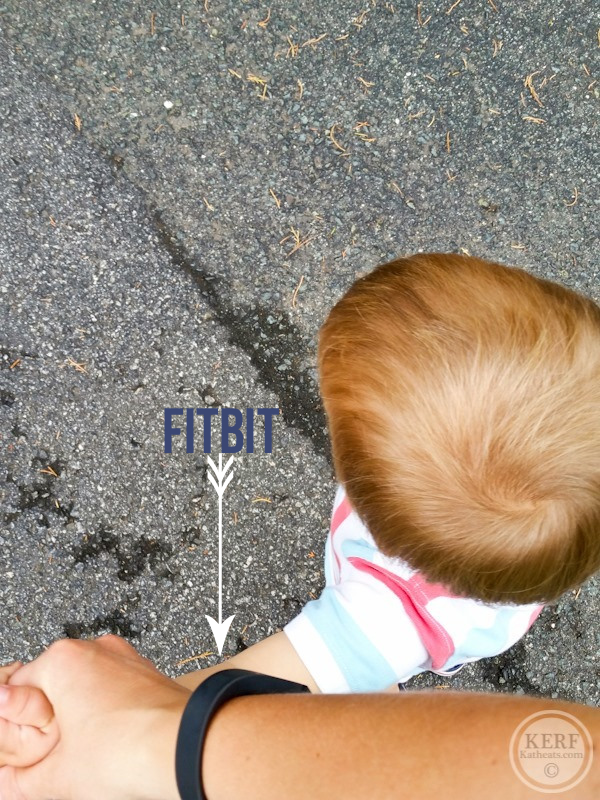 I gain a lot of my steps around the house – probably half of my steps for the day happen at home. That’s really interesting to me since I’m obviously not covering much ground. But I think it’s a sign of all the things a mom of a toddler must do on her feet throughout the day 🙂 If 20 minutes of walking is a mile and a mile is about 2,000 steps then I’m sure I do walk a mile or two around my house.

On a daily basis I haven’t found the Fitbit to be super motivating to get me to the gym. Probably because I do my workouts for reasons other than a step count. But I did find it to be the perfect companion on our recent beach trip. I decided to take a week off of formal workouts and make my only activity goal to hit 10,000 steps a day. This was easily achieved by playing on the beach for a few hours and getting in one short walk on the beach each day with Caitlin. One day I went to bed with 9,600 steps under my belt – I should have gone for an evening walk but it was raining that evening! But all of the other days I hit 10,000. Since I was out of my normal routine, this was a great gauge to tell me that I was almost as active as usual without formal workouts. If you were going to visit a big city where you walked everywhere, it would be equally as helpful. When I went on my trip to Hershey I went for a walk in the afternoon just to boost my steps. 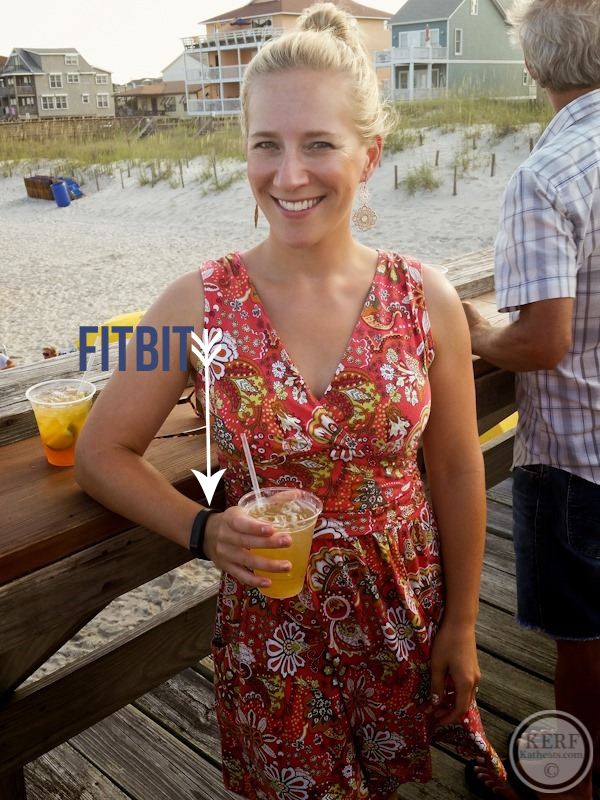 While the Fitbit has food diary features, a water counter and sleep tracker, I find that I don’t really use those. I’m mostly concerned with steps and activity.

I really wish you could see the step count on the Fitbit band instead of just dots. My trainer Erin has this Garmin Vivofit and hers can do a lot more than mine on the band itself. Yes the app is handy and I can see steps in a widget on my phone at a glance, but they still always take a second to sync, so it’s not immediate and sometimes I just don’t have my phone with me. And sometimes I want to know if I’m on the low or high end of the third dot! I think having the steps right on the band would help encourage even more activity. Like on a beach walk: “I’m going to turn around when I reach 2,000 steps” verses turning around when you just feel like some time has passed.

I have to charge the Fitbit maybe every 5 days or so, but it would be really nice to be able to go for a week at a time and have a dedicated charge/rest day to coordinate at the same time. The Vivofit uses a battery that only needs to be changed once a year. That would suit me better, I think.

While it’s not the prettiest accessory in the world, I find it to be comparable to wearing a ponytail holder on my wrist, which I am used to already. I just bought this band in Teal and love it!! 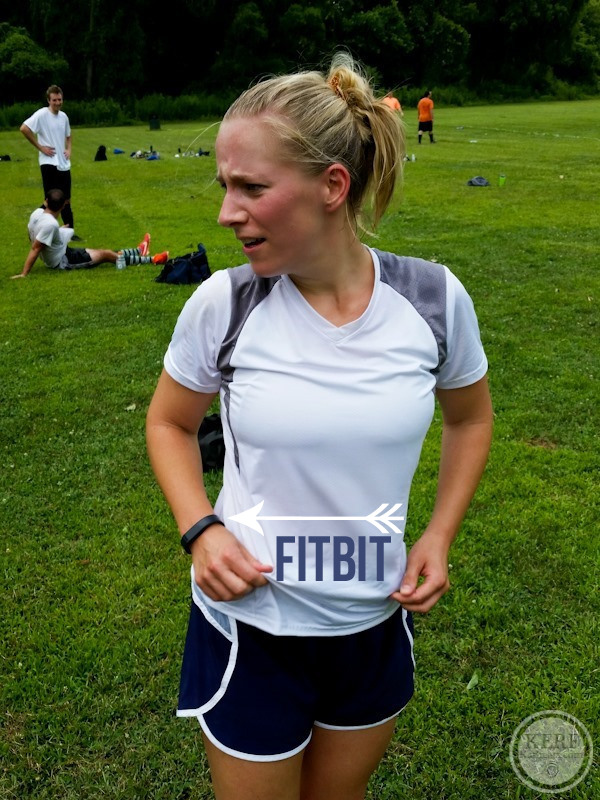 I think the Fitbit is ideal for someone who has a pretty flexible lifestyle that allows you to make choices all day long: Do I walk or drive to the bank? Do I park at the other end of the parking lot? Do I add 10 more minutes of walking to my afternoon loop? Do I have the energy to take the toddler to the park for a second time? It’s the days when these small changes add up that have been the most inspiring to me (verses the 5,000 step walk followed by nothing the rest of the day while I was trapped in the car.)

I’d love to hear some of your activity tracker experiences – including other brands!

FYI this post isn’t sponsored in any way – unless you count a friendship with Theodora as a perk : )