You are here: Home / Lifestyle / A Running Metabolism

Last day of the metabolism titles – at least until my next test!!

I got up this morning knowing I needed to work out first thing because I’m meeting friends to study in Rock Hill at 11 and need to leave around 10:15 (uh oh, I don’t have much time!)

I decided a run would be the most efficient use of my time. Came down and had a tiny piece of toast with some Fortnum and Mason raspberry jam before I left. + water. 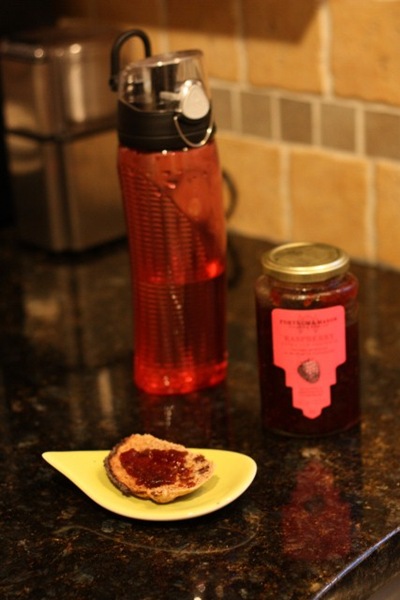 After eating my toast my insulin likely spiked as the starches headed into my stomach and then small intestines where they were chopped into dextrins and then maltose and then at the brush border, glucose + glucose before they crossed into the blood stream

I set out on my run and my ATP-Creatine Phosphate system woke up – for about 10 seconds, until I built up some lactate that was taken to the liver for gluconeogenesis [making glucose from sources other than carbohydrate] before my aerobic system woke up a few minutes in.

During the first mile, I ran pretty hard – about an 8:27 pace. I was breathing hard but my legs felt good. The gears of aerobic respiration were cranking through glycolysis, the Krebs and the Electron Transport Chain to provide energy.

My insulin to glucagon ratio tipped to favor glucagon as exercise increased levels and glycogenolysis [the breakdown of glycogen] kicked in. cAMP is stimulated, which stimulates phosphorylase and glucose branches are chopped off of the glycogen trees. Epinephrine in my muscles helped breakdown the stored glycogen there and glucagon stimulated glycogenolysis in the liver to maintain a steady blood glucose level as it traveled to the tissues that needed it most. Perhaps my brain in this case because I was thinking hard about my life as I always do on runs!!

Around mile 3 I hit a wall and my pace slowed a bit. Perhaps at this point I started to run a little lower on glycogen and lypolysis [the breakdown of fat] kicked in a bit. Because fat takes more oxygen to oxidize, my breathing got harder, causing me to slow a bit. Gluconeogenesis is stimulated here as glycerol, lactate, pyruvate and perhaps fatty acids are used to provide some energy.

Miles 4 and 5 for held at about an 8:50 pace as I continued to burn stored glycogen and oxidize fat. Did you know that carbohydrates are very expensive to turn into fat? The body likes to take carbohydrate and turn it into energy or temporary storage in the form of glycogen. It is expensive to convert glucose to fat – it takes about 25% the energy in the CHO to do so. Protein is less expensive at 8-25% and good ole fat is only 5%. Lesson: If you’re going to consume anything in EXCESS, make it be carbohydrates, not fat! (Of course fat is imperative to optimal health and tastes delicious, so don’t take that the wrong way)

So as I concluded my 5.6 mile run, I began to think about what delicious foods I could have for breakfast. The new loaf of cinnamon raisin walnut sparked interest, as my stomach again felt a little uneasy after such a hard run.

I decided on a slice of CRW bread from Great Harvest topped with some TJ’s PB, half a mashed banana + honey 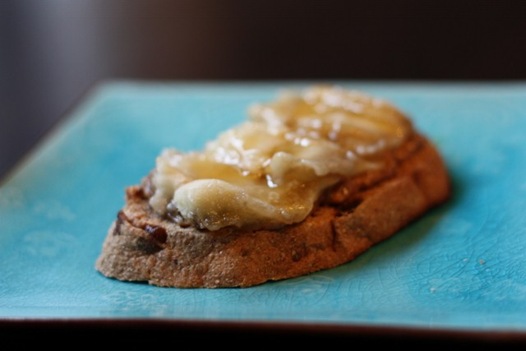 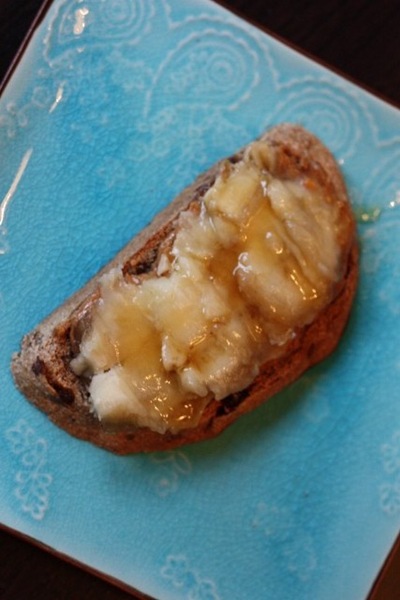 PLUS a little yogurt cup with grapes, chia seeds and Kashi GoLean Crunch 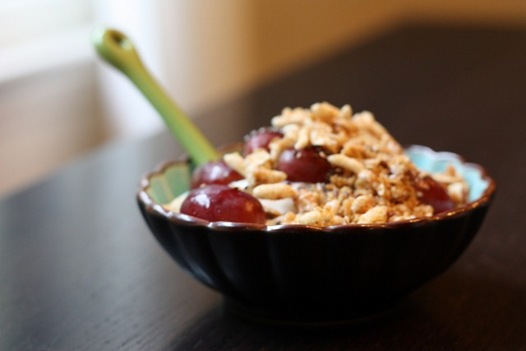 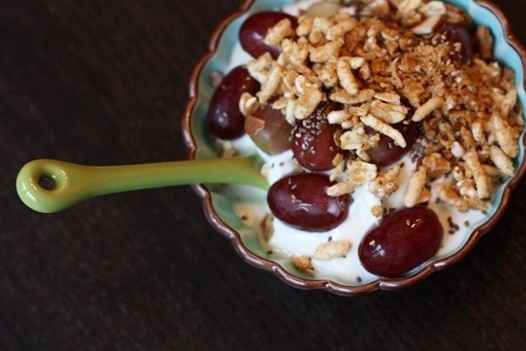 About the time of ingestion, the foods again are absorbed into the blood stream [except for the fats, which go through the lymph!] and to the liver. Blood sugar rises. New processes take over as insulin levels rise and glucagon levels decrease. cAMP is inhibited and glycogen synthase is stimulated. Glycogen levels are restored in the liver and muscles as the branching enzyme builds the tress back up. Gluconeogenesis is no longer needed, as there is sufficient glucose from food. And my stomach is happy!

[Hope you enjoyed the science lesson! I am not an expert, so if I made a mistake in any of the above, it’s just the learning process at work!] 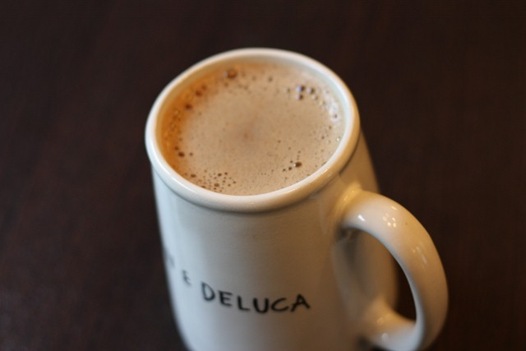 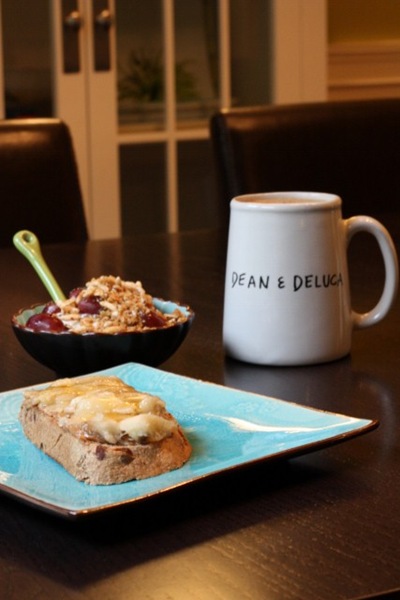 The long day begins but once it’s over, it’s all downhill until my trip this weekend!!!