You are here: Home / Lifestyle / Your Nightly Entertainment

Totally forgot that I had a date with my girlfriends until I started getting texts this afternoon!!

The location: Tasty-Yo, Charlotte’s first and only tart fro-yo place!! I had it for the first time a few weeks ago, but they just opened a new location in South Charlotte much closer to home!

Emily + Caitlin were my dates! 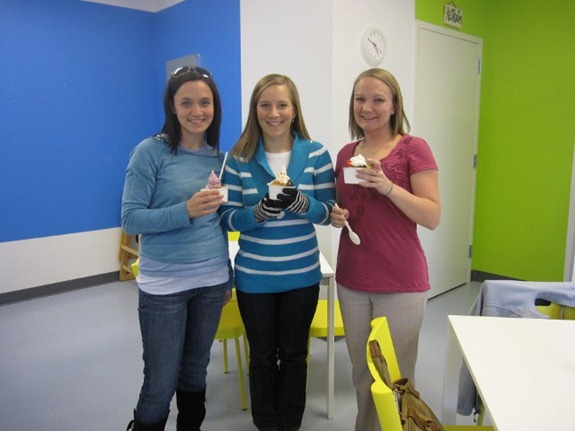 An original tart with gingerbread, coconut and chocolate chip minis with a drizzle of the FREE caramel! DIVINE!! I love this stuff in a dangerous way. The best tart yogurt I’ve tried. It’s JUST LIKE frozen Greek yogurt. Very, very creamy. 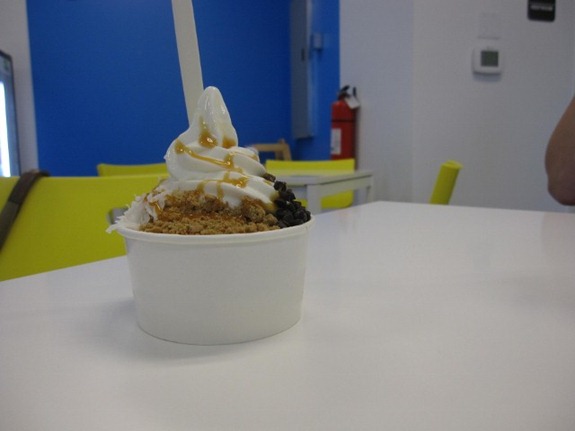 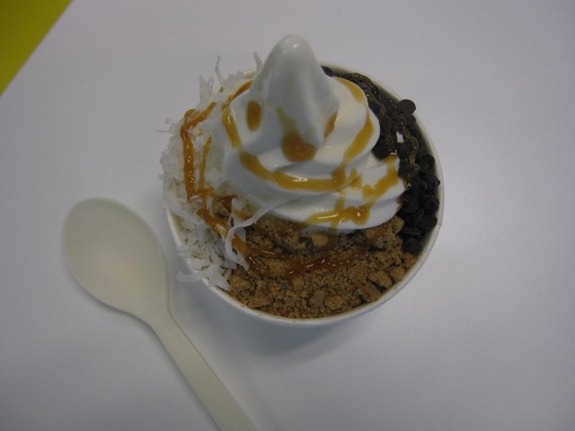 After devouring our yogurts, we went for a brisk 25 minute walk in the neighborhood. Friends are fun

Great Harvest was on my way home and Matt was still there having gone in at 4AM! I caught him in action bagging bread. They bake crazy amounts of bread before holidays! Makes me so excited for our store when I go in 🙂 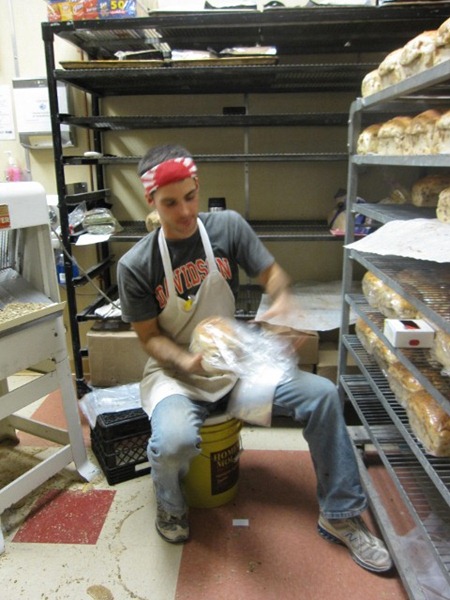 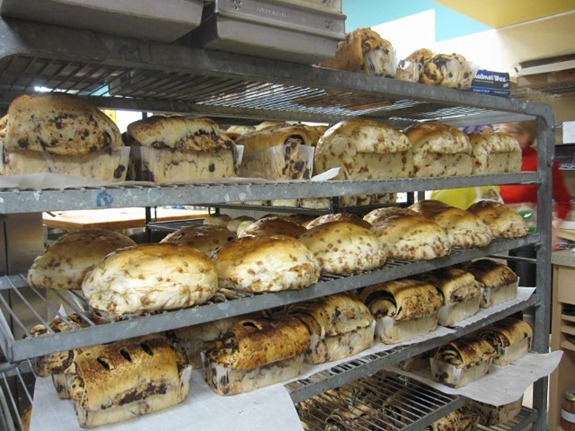 He gave me a taste of Chocolate Babka…drool. As if I needed more sugar before dinner! 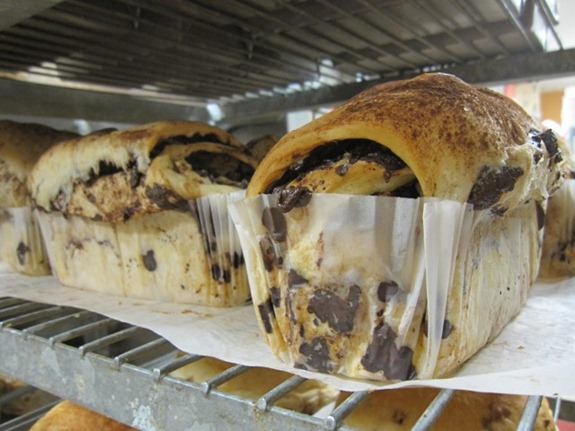 Some beer in a coffee cup was also sipped. And a sample of chicken salad and pesto mayo was fed to me! 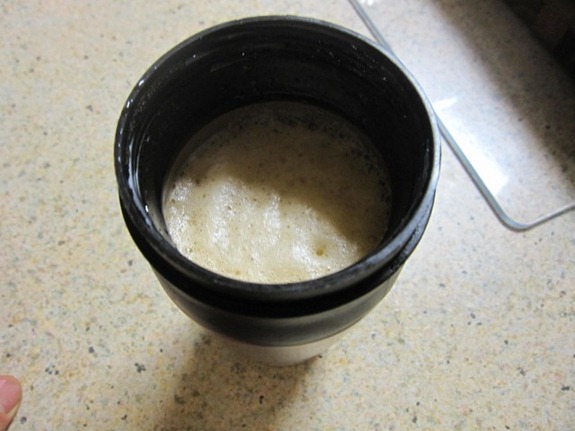 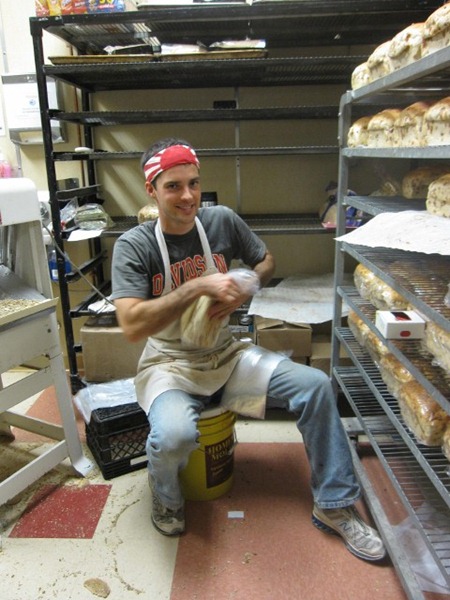 He came home via bicycle a bit later and proclaimed that he needed some vegetables and then was going straight to bed. I helped him make a spinach salad with wheatberries and olives plus an orange.

[Found this sweater at Target for $10 today!] 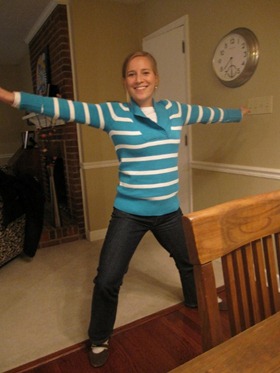 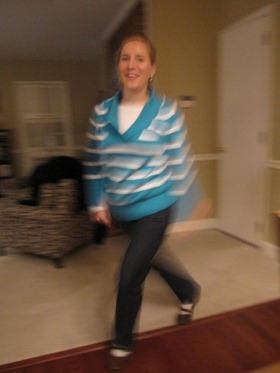 And now for your nightly entertainment…..

At least I wasn’t singing too!!!

Because of my late and heavy snacks, I just wanted a light dinner. If I were a single gal, you’d see me do this a lot – throw a bunch of leftover stuff in a skillet.

Tonight was a diced Applegate Farms Organic Feta + Spinach Chicken/Turkey Sausage with green beans, wheatberries (cooked), a giant handful of spinach and lots of Cajun seasoning all cooked in a skillet. Plus tortilla chips for some crunch. 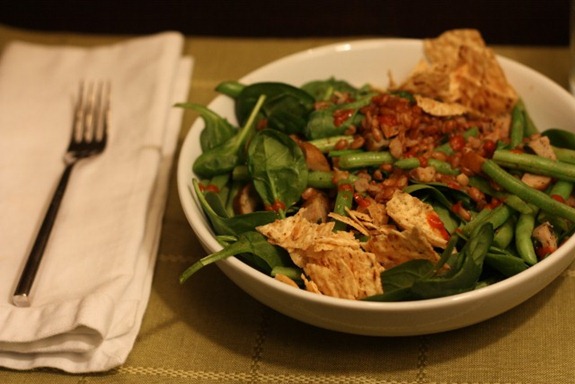 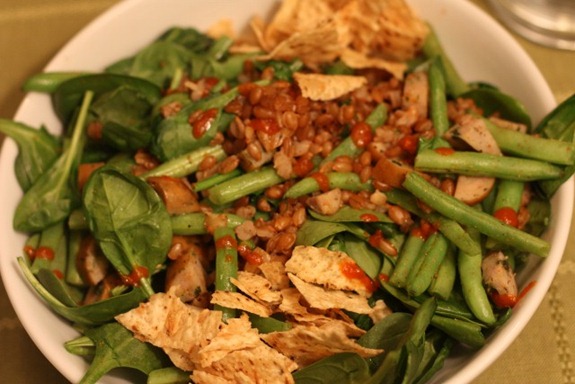 That’s Sriratcha on top! This was too much Cajun because it turned out super salty! But it was also amazing. 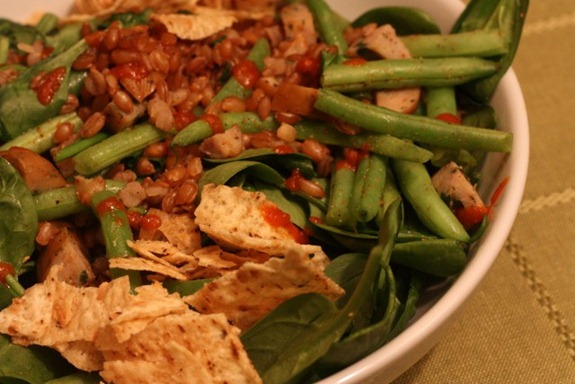 I wasn’t really hungry, but I needed a palate cleanser and toothpaste is NOT for dinner.

Emily brought me an organic cookie from her workplace – Blynk Organics – to munch. I decided to have a nice piece off the edge. 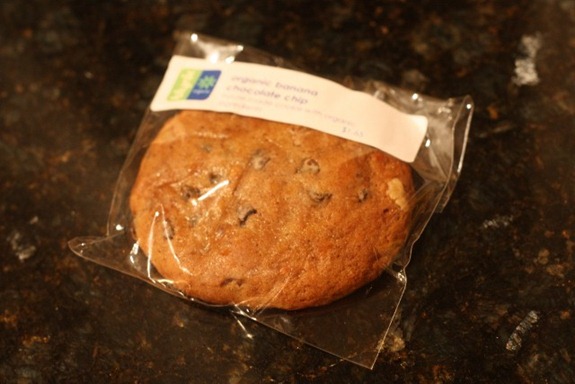 It was awesome. I’d call this a “cookin” because it was half cookie half muffin in texture. Soft and cakey but like a cookie! Perhaps good on some oats!? 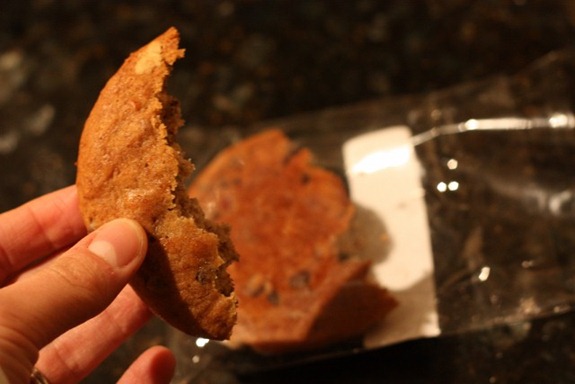