You are here: Home / Recipes / Vegetable Quiche with Homemade Crust

This vegetable quiche with a homemade crust is easier to make than you might think! Perfect for breakfast, lunch, brunch, or dinner, you’ll be eating quiche all day. 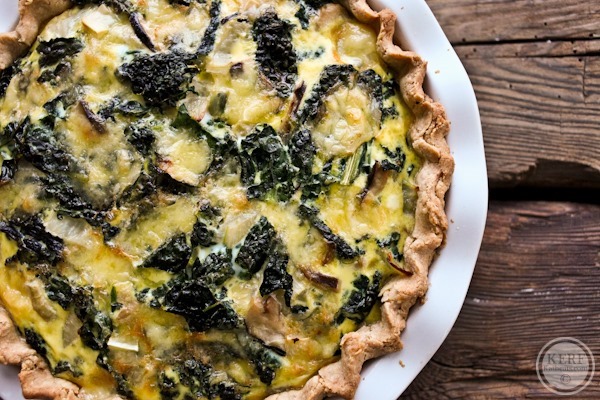 Quiches are becoming one of my favorite foods – combining the rigor of baking with the craft of cooking satisfies both the scientist and artist within!  Quiche is the kitchen sink dinner (everything but the…).  Assuming you have enough eggs and milk, you can use whatever random ingredients or leftovers that are taking up space in the fridge.

First let’s talk crust.  This one is 50% whole grain, and I used a soft white spring wheat that we milled at the bakery.  This type of wheat would typically be labeled “whole wheat pastry flour” in the grocery store.  It is a whole grain, but it is a variety of wheat that has lower protein content than the kind you would use for bread.  This means it won’t have too much springy chew like a bread, and it also won’t absorb as much water as bread flour.  It also has a subtle, nutty flavor that I think is nice for a background taste of whole wheat.

Begin by adding the flours and sugar to a mixing bowl and stirring to incorporate.  Note that this recipe is written for salted butter, but if you’re using unsalted then you should also add 3/4 tsp salt and stir to incorporate.  Then add the butter. 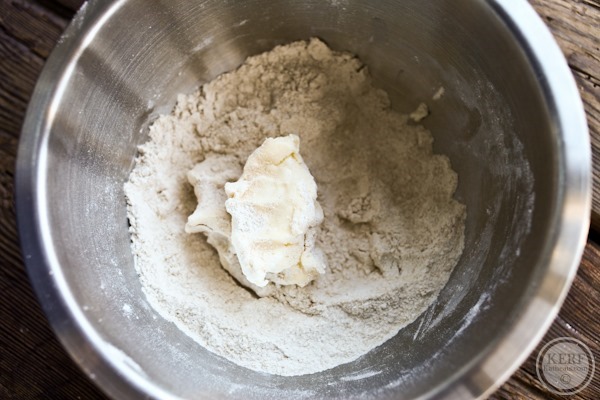 So I just want you to know that I cheated.  Every single pie crust recipe you see out there will encourage you to use cold butter to make your crust with a food processor or mixer.  But quiche is not like pie – with pie, people will frequently comment on the quality of the crust.  Not so with quiche – the fillings are the star.  I use room temp butter with quiche crust because it takes less time to incorporate.  Okay, so I’m lazy – nobody will notice.  Squeeze the butter into the dry ingredients. 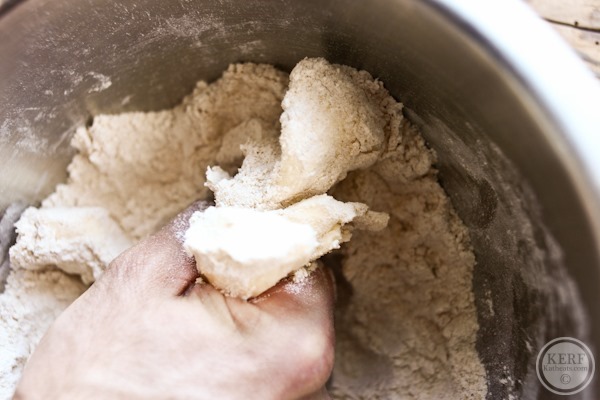 Eventually you’ll be left with butter bullets coated in flour: 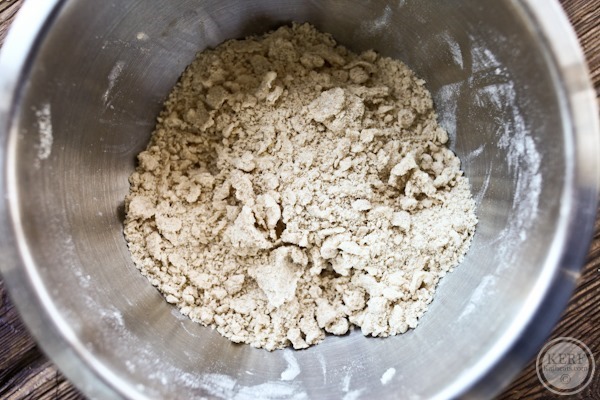 The common description is “pea-sized clumps of butter and flour.”  You should be able to lightly squeeze it together and form a loose lump like this: 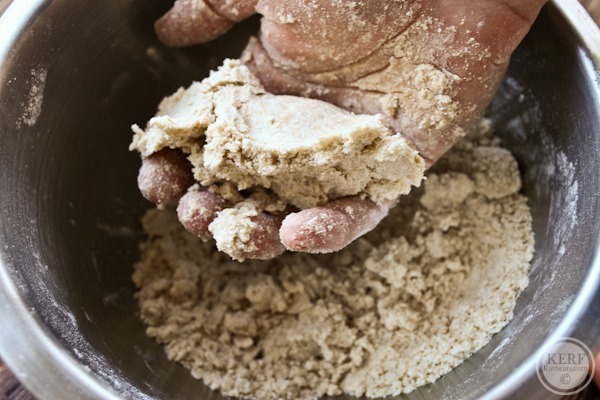 By the way, feel free to use a food processor to make the crust.  Just use the plastic blade (see, it IS used for something).

Next add the water.  You’ll have to be careful in this step because it’s such a small amount, and every flour has different absorptive properties.  I used 3 tablespoons, but start with 2 and see how it looks.  Most infuriatingly, the perfectly mixed pie crust does not look perfectly mixed.  It should look kinda shaggy, with some crusty, dry, floury bits all over.  This crust is done: 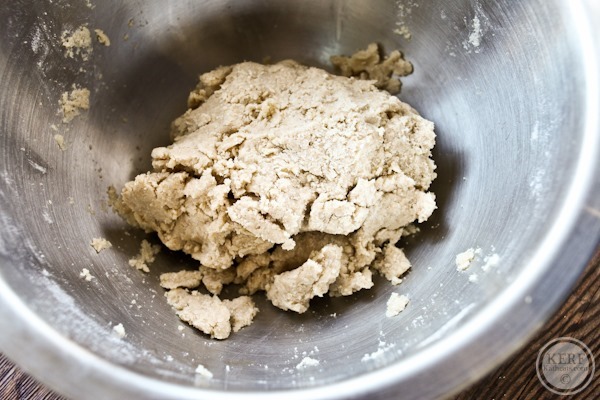 Lightly flour your working surface, turn the dough out onto it, and sprinkle some more flour on top. 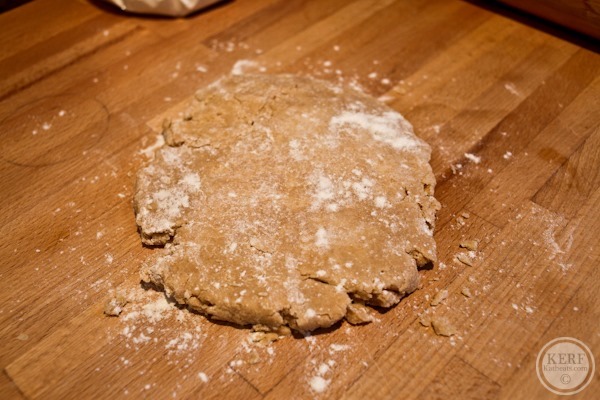 Begin to evenly roll it out.  Don’t worry about splitting.  If it breaks, just mend the seams by re-squishing the dough together (yeah that’s a technical term).  Roll it out to be slightly bigger than the target pie pan. 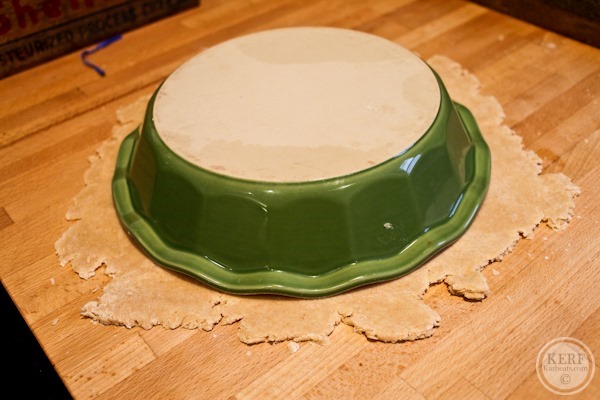 Spray the inside of the pie pan until lightly greased.  Then put the crust in.  Don’t worry if it looks like this: 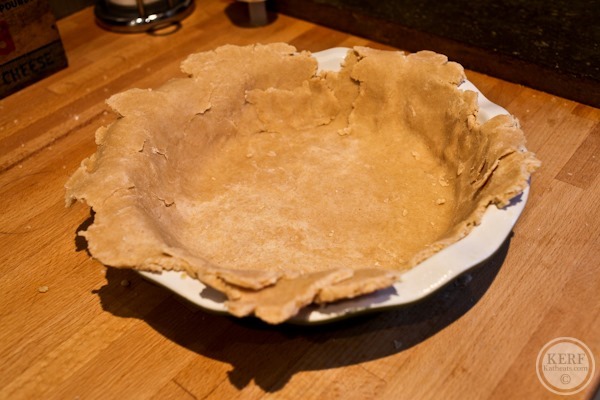 Begin to take some of the overhanging pieces off to even out the edges that are lacking. Just smash ‘em in: 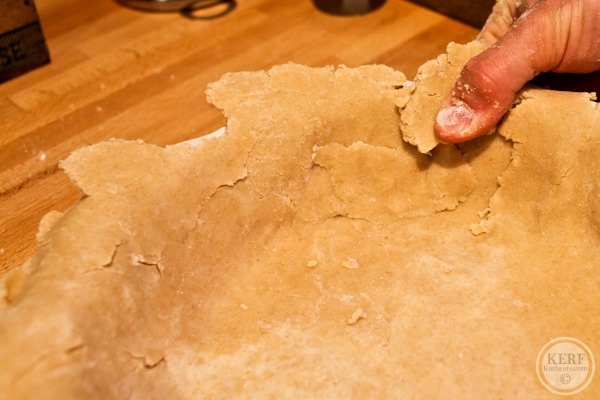 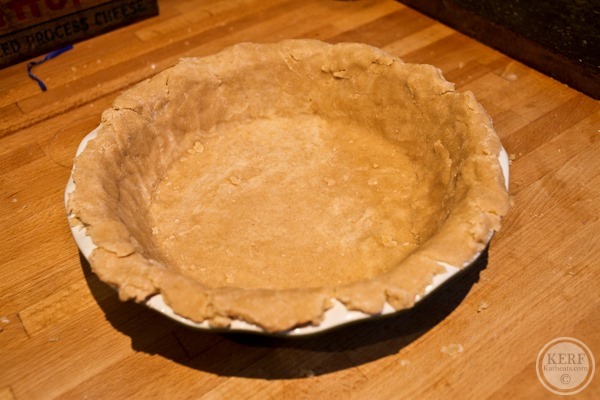 Still not pretty but that’s okay.  Now we’re getting to the tricky part, but don’t panic (it’s mostly harmless)!  Fold the scraggly edges of the crust underneath itself and pinch together to create a neater edge: 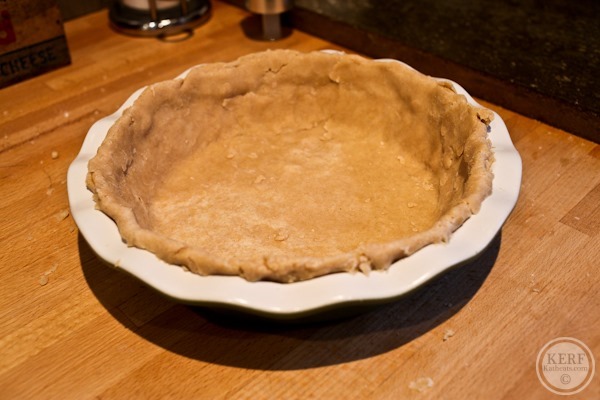 See how more of the pie pan is visible?  That’s because I folded that extra crust under so that the edge would be thicker and taller.  Now it’s time to flute the crust.  This isn’t as hard as you think, and it also doesn’t have to be as perfect as you think, and it’s totally worth it because it looks awesome.  Just do what this picture is showing all around the edge: 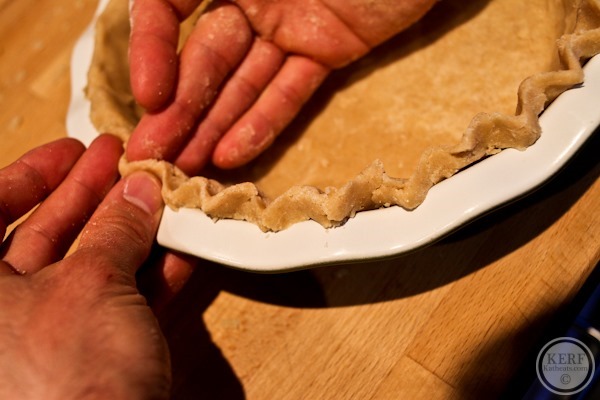 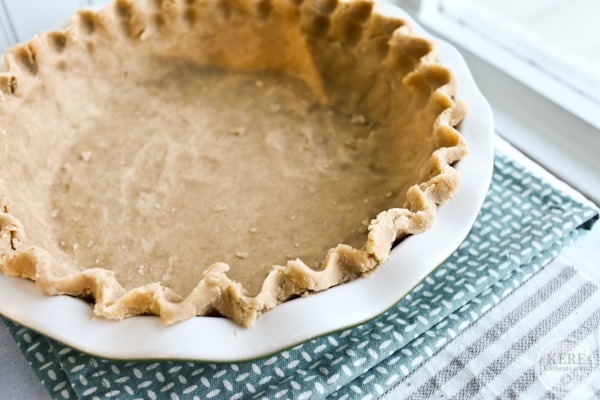 And here’s a close-up that shows just how imprecise you can actually be: 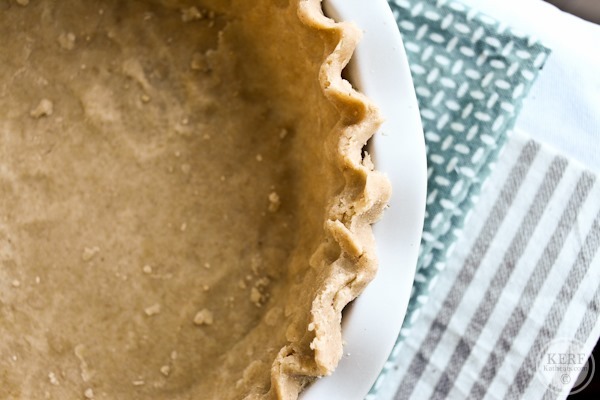 You can prepare the crust to this point a day or two in advance and then just refrigerate it.  Or you can mix it into a dough ball and freeze for quite a while.

Now onto the filling.  Again, you can use just about any ingredient you want to reach the requisite 3 cups but whatever you use, it should be fully cooked.  We sautéed shiitake mushrooms and fennel and then finished with some chopped lacinato kale.  The fillings should be lightly salted. 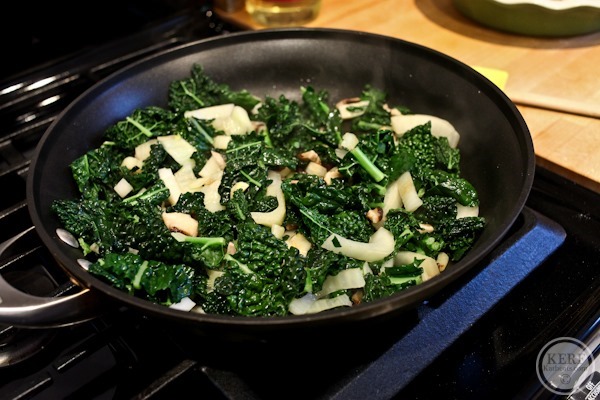 While the fillings are cooking, prepare the eggmilk. 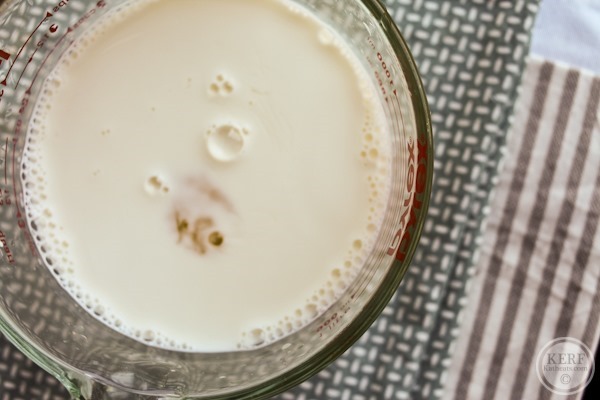 Dump the fillings in the crust first 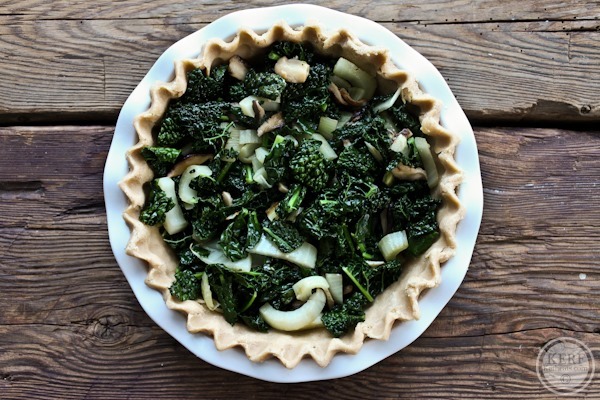 And then pour the egg mixture in 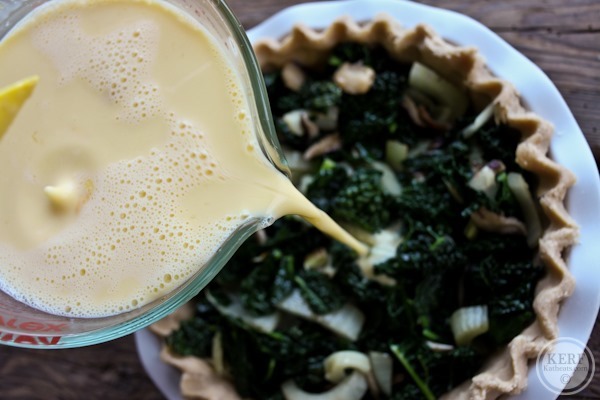 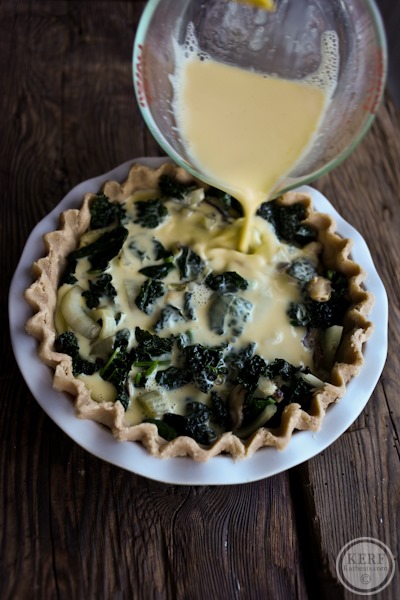 Push everything around to make sure it’s evenly mixed 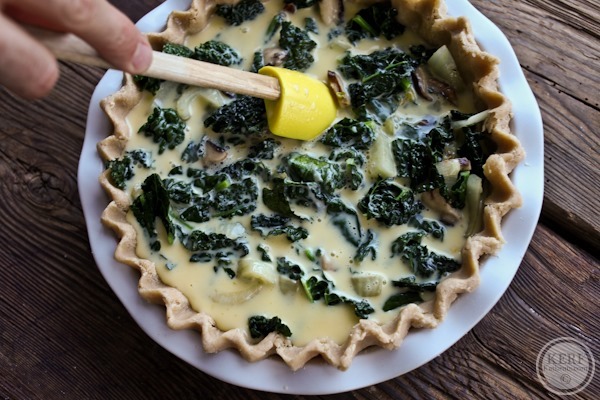 Add cheese on top, if using.  Cheese is notoriously difficult to taste in quiche so use something flavorful like bleu or a REALLY sharp cheddar. It can be grated or cubes. Goat cheese is always nice! 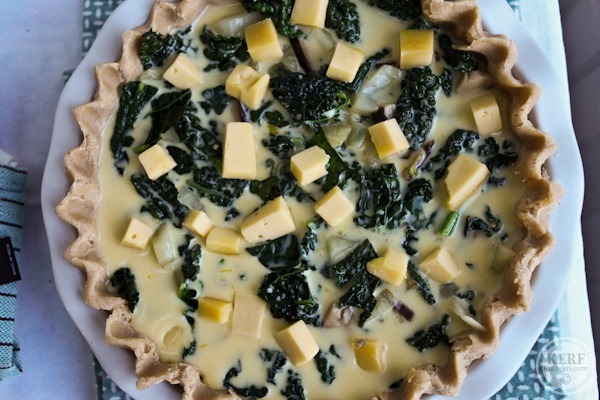 Bake for 40-60 minutes.  First check of doneness is if the liquid doesn’t wobble when the pan is jiggled.  Second check is if it springs back when you lightly press down with a finger.  Also note the browning of the crust and the top of the quiche.  Yum! 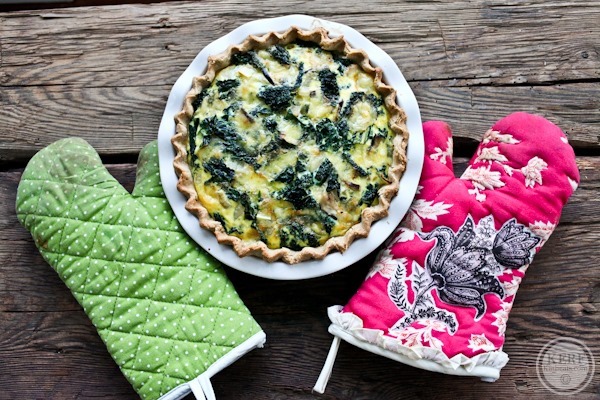 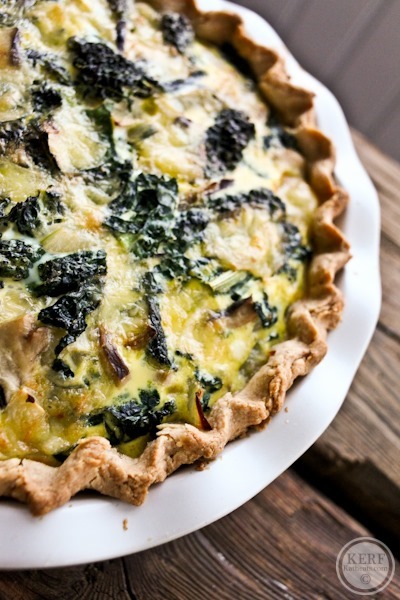 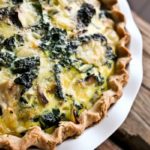 Quiches are becoming one of my favorite foods – combining the rigor of baking with the craft of cooking satisfies both the scientist and artist within! Quiche is the kitchen sink dinner (everything but the…). Assuming you have enough eggs and milk, you can use whatever random ingredients or leftovers that are taking up space in the fridge.
Prep Time 20 minutes
Cook Time 1 hour
Total Time 1 hour 20 minutes
Servings 8 Slices
Author Kath Younger 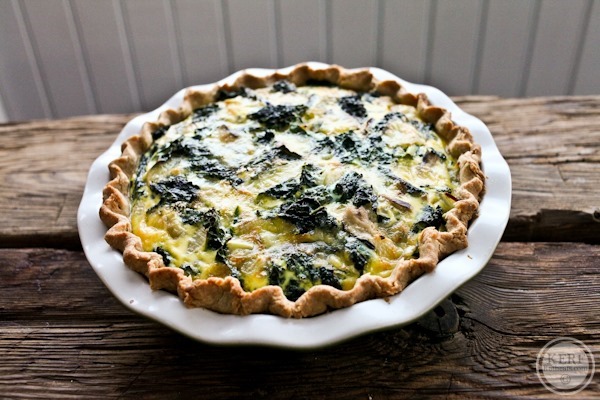 We usually serve this for dinner with a nice green salad on the side and eat the rest for lunch the next day! 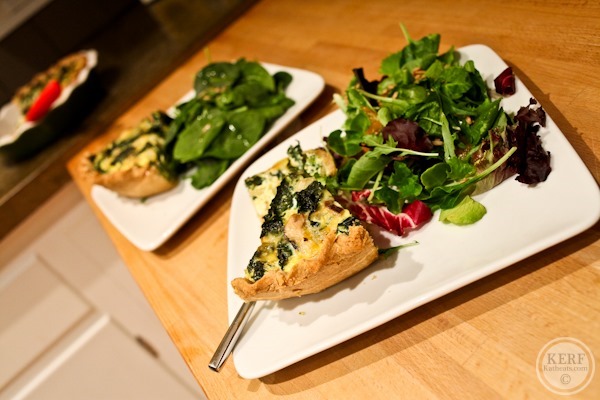