You are here: Home / Lifestyle / Too Much To Say

Matt woke me up sniffing this morning at 7:00 – less than 7 hours of sleep. I snoozed for a little bit, but the sniffing continued, so I was up. He redeemed himself by making pancakes for breakfast! 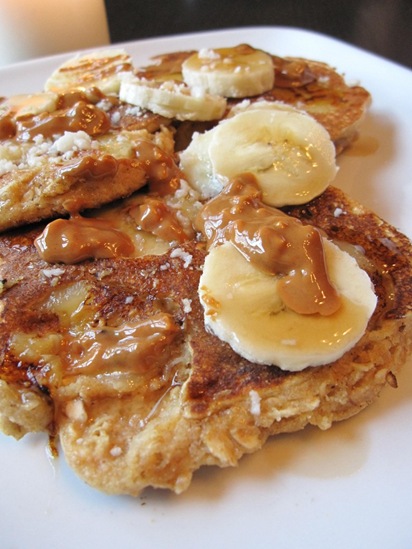 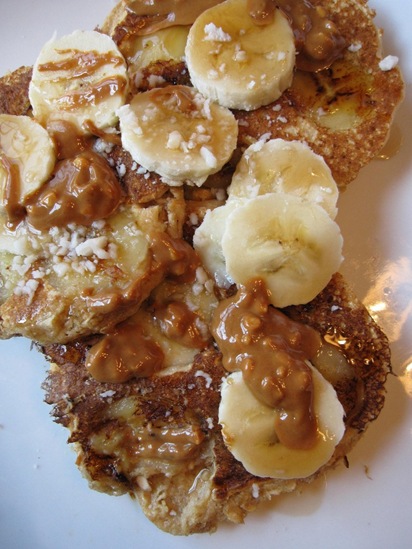 These were from the Great Harvest mix we used on New Year’s Day. 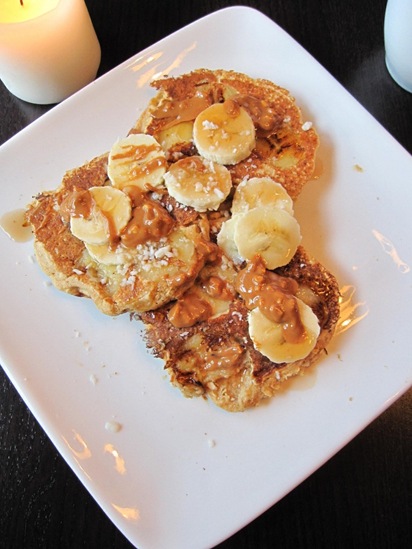 Mine were topped with some more banana, coconut butter, maple syrup drizzle and TJ’s PB! 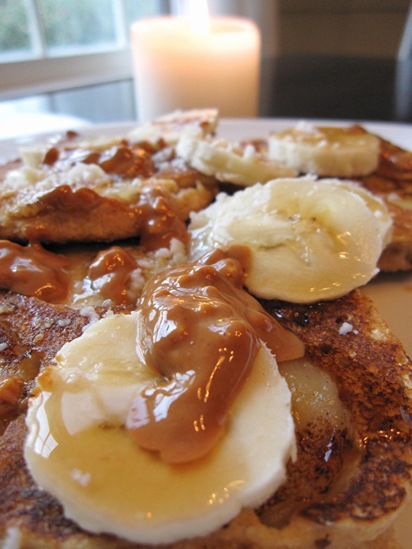 I have ALWAYS wanted one of these peanut butter stirrers and Polly was so nice to send me one! I jumped up and down when I opened her package. 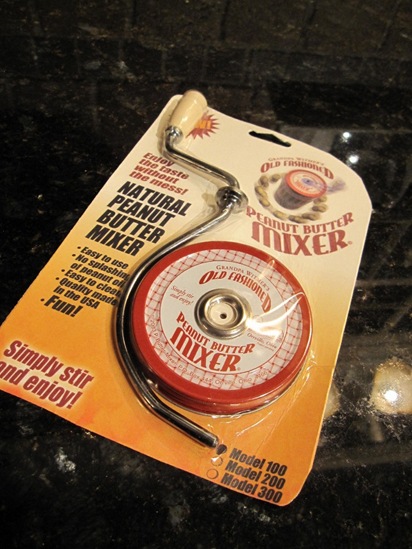 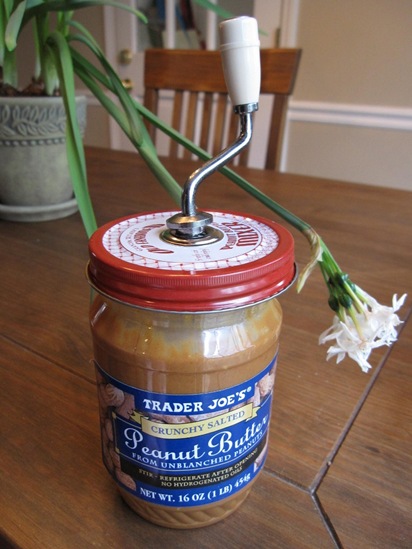 It worked quite well (the lid was too big for this jar, but it was still perfect to hold it in place and stir) 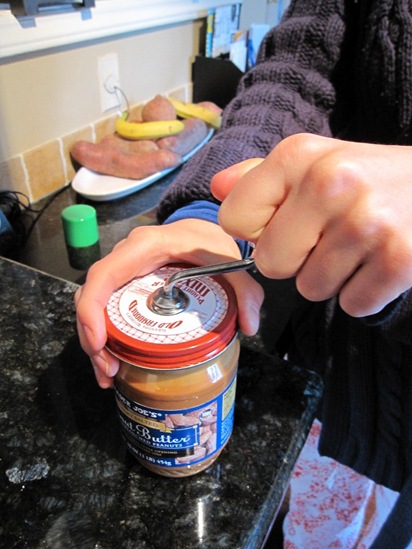 And the best part was licking the crank! 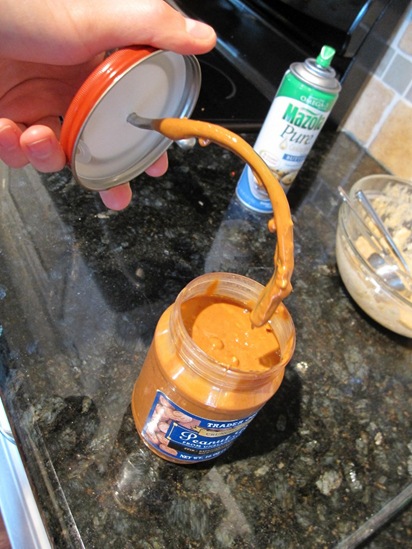 I ground the Georgia Pecan coffee into a finer grind and it was definitely improved from yesterday. But still weak!! Very light on the mouthfeel with no body. I think this coffee is just too light for me. I’m going to have to mix it with a heavier blend. 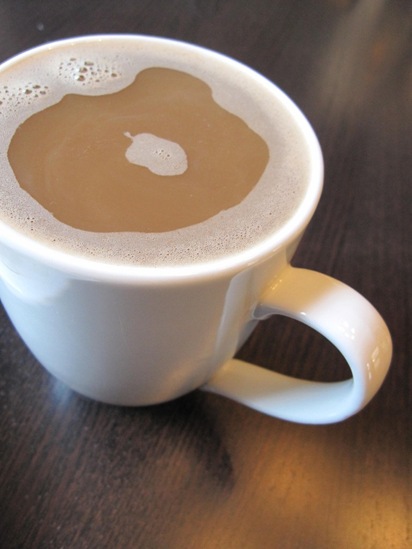 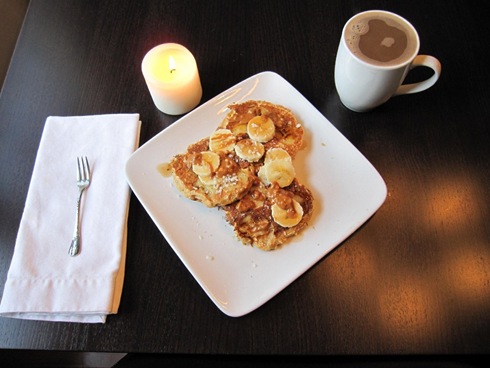 As you probably know, I read the book Intuitive Eating in January for the second time. Well, technically it was the first time. I bought the book about a year and a half ago – just barely after I’d entered maintenance – and only made it a few chapters in, skimming the rest, before I decided that their concepts would not work for *me*.

This time around, I was mentally ready to listen to what the authors had to say, and I found it fascinating. The book’s authors argue that the deprivation that comes with dieting (of all kinds) and using outside cues to dictate eating leads to overindulgence, abnormal eating behaviors and a yo-yo cycle of guilt, cravings and unhappiness. They state:

“If you took your car to an auto mechanic for regular tune-ups, and after time and money spent the car didn’t work, you wouldn’t blame yourself. Yet, in spite of the fact that 90-95% of all diets fail – you tend to blame yourself, not the diet! Isn’t it ironic that with a massive failure rate for dieting – we don’t blame the process of dieting?”

The book outlines several dieting personalities: the Careful Eater, the Professional Dieter and the Unconscious Eater, all of which have several subcategories.

What I found to be the most influential point of the book was a description of a starvation study done during WWII by Dr. Ancel Keys called the Minnesota Starvation Experiment. Thirty-two men who were considered healthy, intuitive eaters were observed for 3 months and averaged an intake of 3,492 calories per day. They were then put into a 6-month semi-starvation period where their calories were nearly cut in half, averaging 1,570 per day. This deprivation sent the mention into a downward spiral of behavior. See if any of this sounds familiar:

“During the refeeding period when the men were once again allowed to eat at will, hunger became insatiable. The men found it difficult to stop eating. Weekend splurges added up to 8,000 to 10,000 calories. It took the majority of men an average of 5 months to normalize their eating.”

Striking. They had me convinced here. I couldn’t believe how normal healthy eating men would exhibit the same behaviors that so many dieters experience!

So I read on to uncover the author’s steps to become an Intuitive Eater, the highlights being:

I have so much to say about this book that I hope these thoughts make sense to you guys. Here are a few other lightbulb/significant points I noted:

There were so many other good points in this book, but I can’t remember them all to summarize!

My first reaction was: well, my “diet” did work. I lost 30 pounds and have kept it off for two years. So does that put me in the 5-10% group? Does this book even apply to me? I don’t really deprive myself of any foods in general, but I do think I exhibit restraint and don’t eat whatever I want whenever I want. I only “allow” myself to eat freely on special occasions. So then I guess I am part of the diet + deprivation group to an extent? I do have a problem with eating to the point of sickness at times and binge behaviors, but this occurs almost only when alcohol is involved (as special events and alcohol are almost always enjoyed together). So I’m not sure if that is a reflection of deprivation or losing inhibition?

As I was reading, I categorized myself as a Careful Eater, although I feel I am much less of a Careful Eater than I was two years ago while I was counting calories. For the most part, I eat intuitively these days, but I do still use outside cues to dictate my eating, such as “you just ate 2 hours ago, so you can’t possibly be hungry” (time) or “you know peanut butter is high in calorie so you better have 1 spoonful instead of 2 even though you want to eat 3” (calories).

I disagree somewhat with the authors on the labels of “good” and “bad” foods in terms of nutrition and ingredients. I feel it’s more about how you eat them that puts food in these categories. For example, if you put a twinkie alongside an apple, can you really look at these foods as nutritionally equal? And what about artificial ingredients verses all natural ingredients? However, I feel that if you love Twinkies and have one every year on your birthday and enjoy every bite, then it’s “good” for you. Does that make sense? So it’s more about the context of the food that these “good” and “bad” labels apply. A wholesome piece of homemade apple pie, on the other hand, has many of the same nutrients of an apple. It is just more energy dense because there are more nutrients in the pie than an apple. Butter, flour, sugar, apples – they are all nutrients for your body that will help fuel your brain and muscles equivalent of say, 400 calories a slice. An apple is just less of these ingredients for say, 100 calories. So when you put natural ingredients side-by-side, apple pie and an apple are on the same level, especially when you consider the TLC that went into making the pie just for you. So if you want to have apple pie for a snack, have it! You probably will naturally eat less dinner. I never feel guilty for eating cake on my birthday or Thanksgiving dinner, but I do have feelings of guilt if I eat 2 handfuls of kashi crackers while standing at the cabinet because I am bored. It’s not the calories that make me feel guilty as much as the behavior. So to rid yourself of good and bad food labels, I feel emphasis should be placed on the eating environment and enjoyment rather than the food itself.

I feel like there has to be an emphasis on whole foods for intuitive eating to work. What if someone put these concepts into practice but only ate burgers and fries? Would that person ever crave salads? What do you do if you hate all vegetables? The authors seem to suggest that everyone will still get all of their needed nutrients and that they would eat the foods that make them “feel good” after a few meals out. But I feel like there are people out there that would continue to gain weight based on their choices of very energy dense foods and who don’t realize that fast food makes them feel crummy (if it even does at all). When you eat energy dense foods, healthy or unhealthy, I think it’s harder to honor your fullness because they don’t fill you up as much. The whole Volumetrics concept.  If I really give myself unconditional permission to eat an extra spoonful of peanut butter everyday, will my stomach even notice? I feel like I would just consume an extra 100 calories per day and the pounds would gradually add up. But maybe I would eat less at my next meal? I’m a little afraid to find out.

The author’s state that intuitive eaters “go with the flow.” This is something I am working on. I used to bring food with me to events in fear there wouldn’t be anything “healthy” to eat (= total Careful Eater behavior). Recently (even before reading this book) I’ve looked at events where the food is out of my control to be a time to enjoy foods I might not normally eat. It’s been fun! I’m working instead on just enjoying a smaller portion of whatever is served.

One last topic I connected with was honoring my hunger. I do think I sometimes fight with my hunger in the afternoons. I try to push back my snack and avoid spoiling my appetite at dinner. But why go through that anguish if you can just have a snack and then eat less at dinner!? I think it’s my practical side that wants to “save” my hunger for the more formal meal, but I am working on eating when my body wants it most because we can always have leftovers.

So in conclusion (although I could ramble on for hours), I took away from this book the following daily reminders:

I would LOVE to observe the authors counseling patients intuitive eating. I think they sum it all up in this paragraph from “Honor Your Health”

“Make food choices that honor your health and taste buds while making you feel well. Remember that you don’t have to eat a perfect diet to be healthy. You will not suddenly get a nutrient deficiency or gain weight from one snack, one meal, or one day of eating. It’s what you eat consistency over time that matters. Progress, not perfection, is what counts.”

I would highly recommend reading Intuitive Eating. Along with SuperFoods Health Style and Fit From Within, both books that were turning points for me throughout my weight loss.

Wow, that took me forever to type and I could have kept going! We’re going out running now because it makes me feel so good!! Then I’m studying all day long.