You are here: Home / Lifestyle / Sleep Number versus Tempurpedic

Debating between Sleep Number versus Tempurpedic mattresses? Here is our experience with both brands and which mattress we still love! 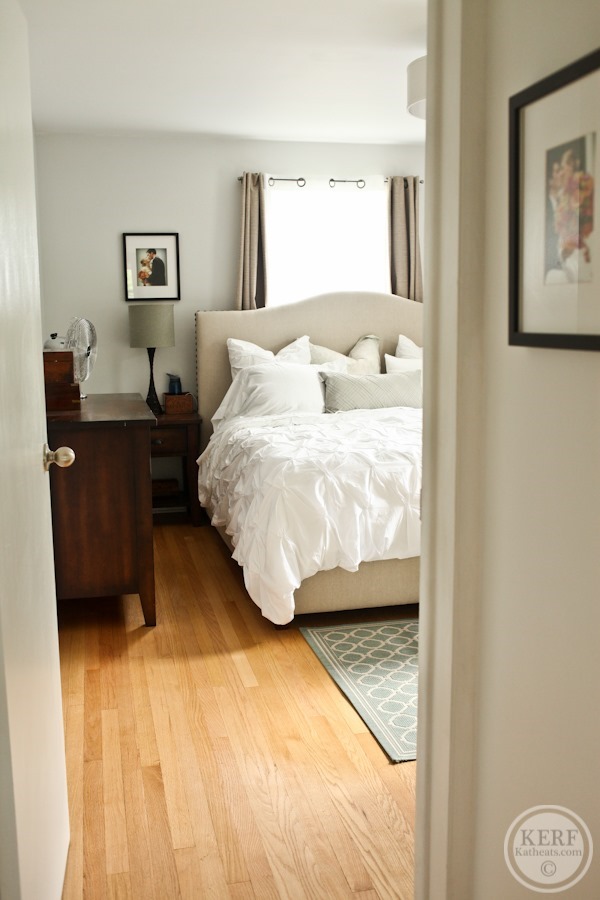 I wanted to tell you a little about our mattress hunting experience. It was a complicated one! I decided to share all of this for anyone debating between Sleep Number and Tempurpedic. I wish I could have read a post by someone who had owned both!

When we started to look into new mattresses, I realized how close in price a queen and king size were. I always sleep significantly better in a hotel room king size bed (I’m a sprawler!) so I knew someday we wanted to get one. The objective wasn’t so much the cost of the mattress, but having to get a new bed and bedding too. It felt kind of silly to get a new queen when the king was just a little bit more and was something we eventually wanted, so since it was time for a new mattress now, we went ahead and made the leap. It wasn’t cheap, but it was sooooooo worth it.

I have several friends who love their Tempurpedic mattresses

We started out looking for a memory foam mattress. I have several friends with Tempurpedic mattresses, and they LOVE them. My friend Alice says that every night when her husband gets into bed he says “Best. Mattress. Ever.” I wanted to love our mattress as much as they do!

I went to test out a Tempurpedic and liked it a lot. But I didn’t know if I was going to loooove it. It was different than any other mattress I had ever tried, so I was nervous. I had Matt go with me a second time and we both agreed that we liked it but we just weren’t sure. We needed to sleep around – ha!

Going to a Sleep Number Store

One rainy day we ended up at the mall so Mazen could run around indoors. Our mall has a Sleep Number store, so we popped in there and tried out some of their beds. “Sleeping on air” sounded so dreamy, right? Turns out Matt was bakery-friends with the sales woman and she was very sweet to us. We felt the mattresses were very plush and comfortable in the store, and having a sagging mattress at home, the thought of pumping air inside to keep it straight across was very appealing. 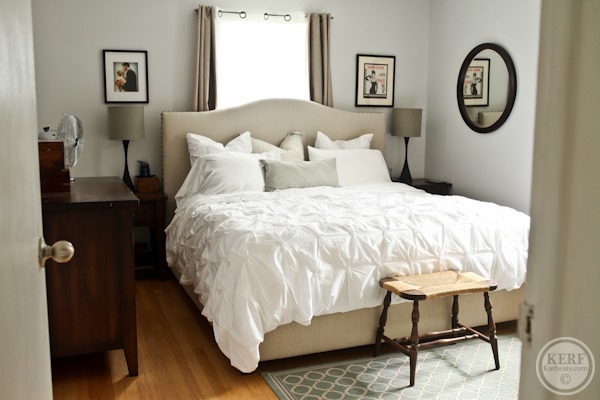 We consulted with a few friends and went back a few days later to buy it. Despite the fact that I really wanted the memory foam version, we ended up getting a traditional mattress top. They were having a big sale that meant we could get a really expensive mattress 40% off. I guess you could say we were sucked into good marketing. The only catch was they didn’t have the exact mattress in the store. The sales woman told us it was the same as the I10 – the one we did get to lay on – but just with different designs on top, so we felt comfortable enough buying it. Plus there was a 90-day return policy, so we felt we had nothing to lose.

Sleeping on the sleep number was not good!

A few weeks later, Sleep Number arrived to put together our glorified air mattress. I was SO EXCITED!

We were assured that it takes a while to find your perfect number. I seemed to be happy somewhere between a 35 and 40 and went to bed that night ready to wake up feeling the best I had in years.

At 3am I woke up and knew we’d made a terrible mistake. I almost started to cry. As a stomach sleeper, I was nestled in a hammock of deflated air and my back hurt from a mattress for the first time in my life. Although the thought of sleeping on air sounds soft, I felt like I was sleeping on a tire. What felt comfortable at 3pm did not feel comfortable at 3am.

I have nothing but good things to say about Sleep Number’s customer service. In fact, they were incredible!! I called the next morning and described what I was feeling and ended up calling them several more times that week. They offered to do everything in their power to help me out, including sending $500 worth of memory foam toppers for free. I agreed to give it more time, but my gut just knew this was not my dream mattress. It was OK, but it wasn’t what I had hoped. I guess you really do have to sleep on a mattress to make a real decision. Thank goodness for the 90-day trials! I would never buy a mattress without one.

Aside from the trouble I had getting comfortable, I also disliked that you had to touch a remote when you got in and out of bed everyday. I also HATED the hump in the middle of the bed that the two chambers created where they met. It was very un-romantic! The mattress was OK but it was definitely not the bed of my dreams and so ultimately we sent it back. Other than being out some delivery fees, we got a full refund.

That same week, I went back to the Tempurpedic store and was 100% sure we should have just gone with Tempurpedic to begin with when I climbed back on the sample bed. We bought a Tempurpedic Cloud Supreme, and the next day it was delivered. It is sooooooooooo comfortable on my stomach, side and back. There isn’t anything electronic to mess with. We absolutely love it!

And guess what I say when I get in bed every night: “Best. Mattress. Ever.” 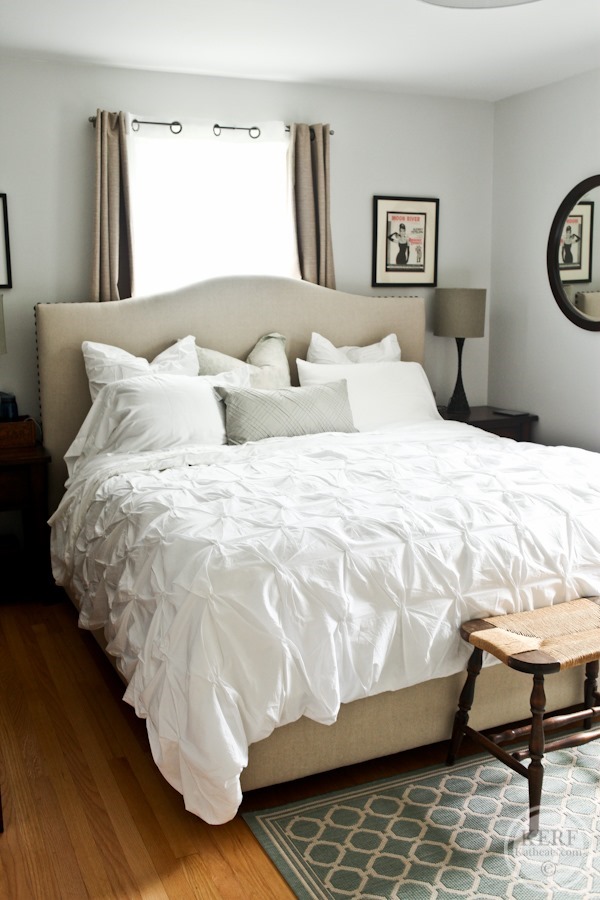 STILL love my Tempurpedic Cloud Supreme so much!!! I still get in bed every night and sing its praises. Such a great purchase!!

We decided to get the same bed as my sister did – the Pottery Barn Raleigh bed. We saw hers at Christmas and loved it, and after all we share the same genes, so it makes sense that we’d love the same bed : ) Plus we’re both from near Raleigh, NC! 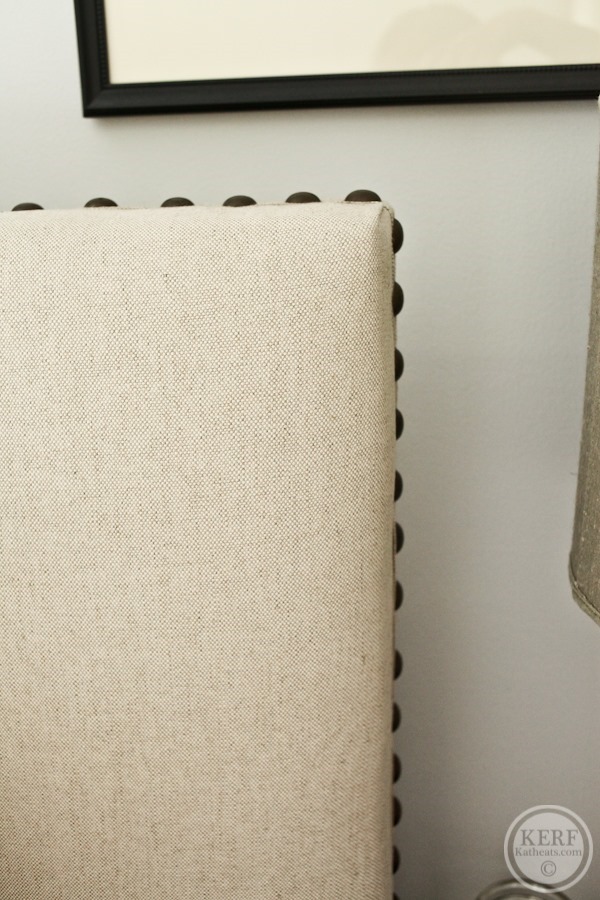 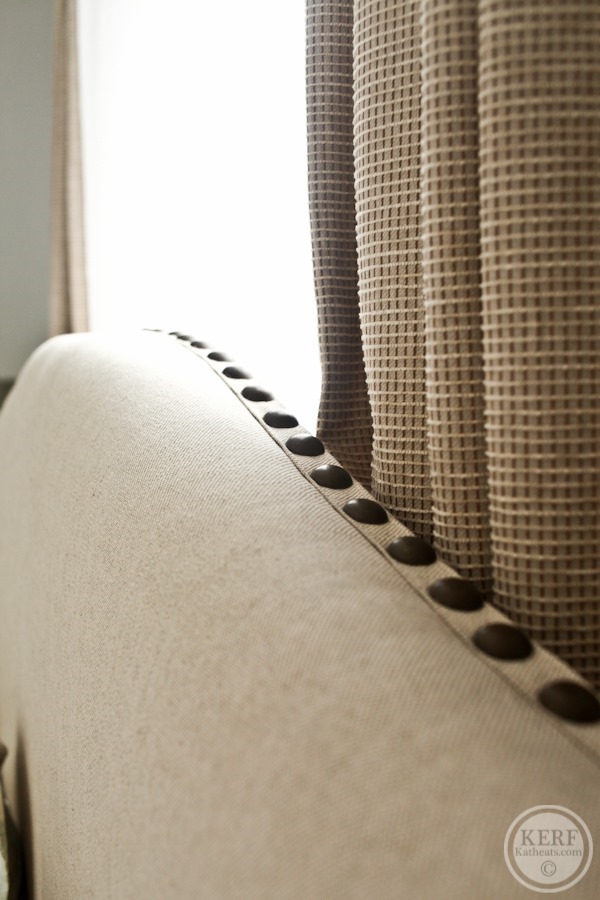 And love that it doesn’t require a bed skirt! It’s upholstered all the way around. 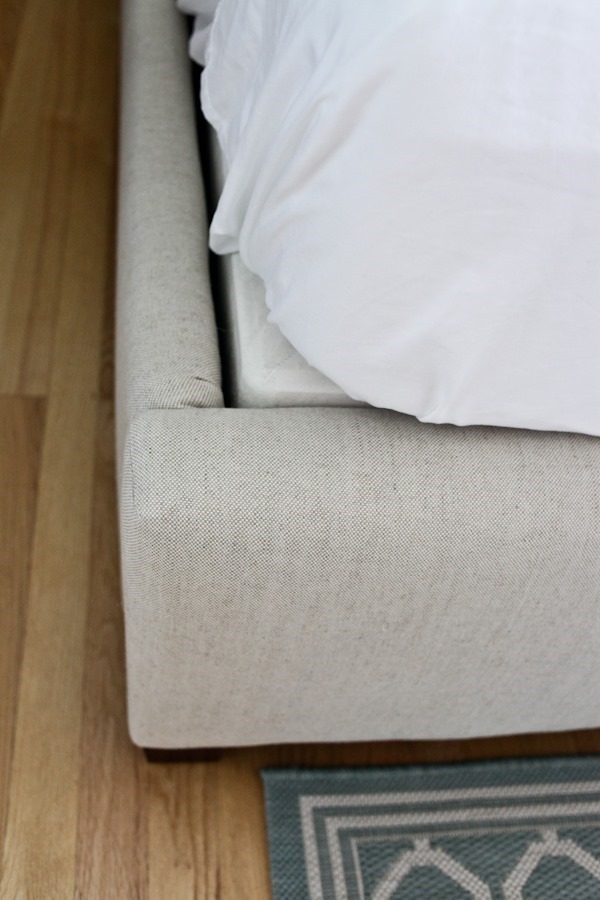 West Elm Organic Cotton Pintuck Duvet Cover + Shams – White (You can get 10% off if you sign up for email – that helped!) 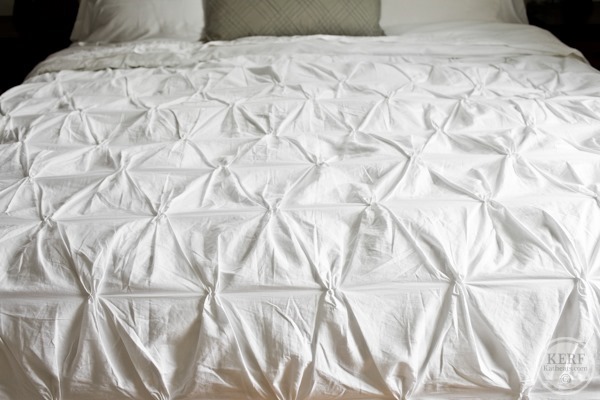 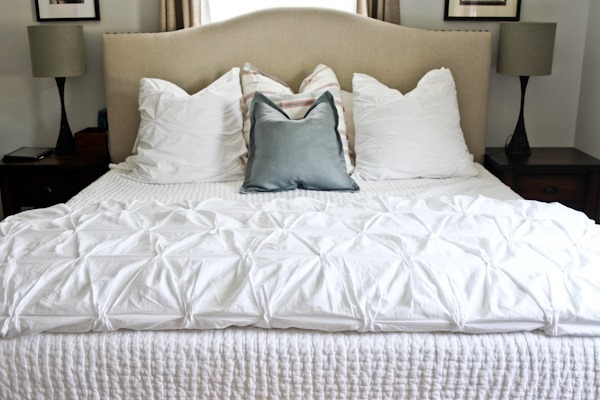 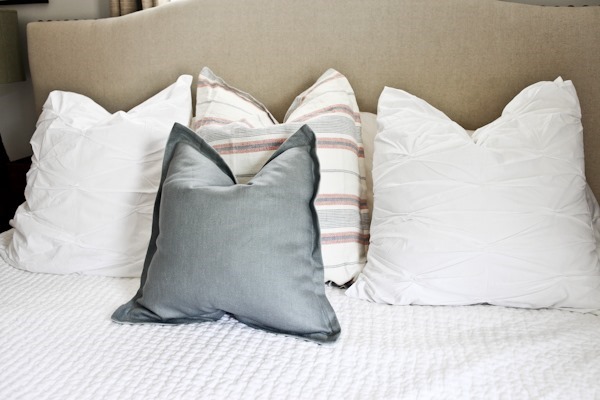 Lands End Percale Sheets (We had these on our queen bed too – percale is the way to go! I got them on sale for just $60). I also love the Threshold Performance sheets from Target which are also a great price. 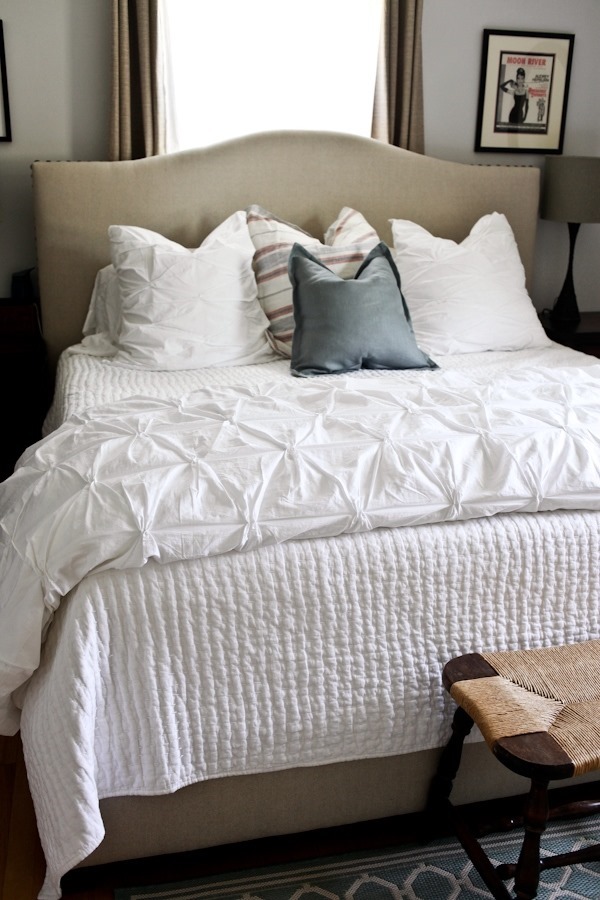 It was really sad to say goodbye to our four poster bed, but it’s now in the attic to come back down when we have a house big enough for it in a secondary bedroom someday! And we still use most of our queen bedding in the guest room.

The many stages of our room: 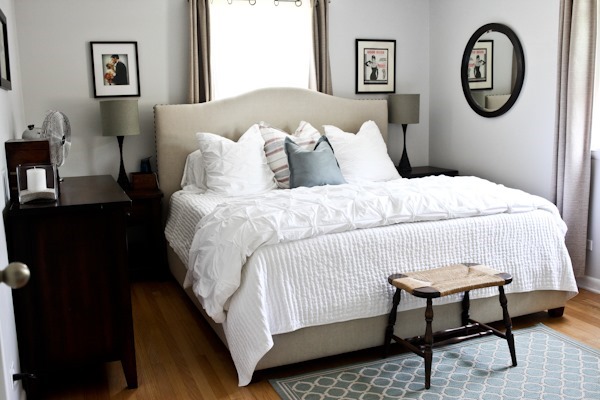 What kind of mattress do you love?