You are here: Home / Lifestyle / The History of KERF 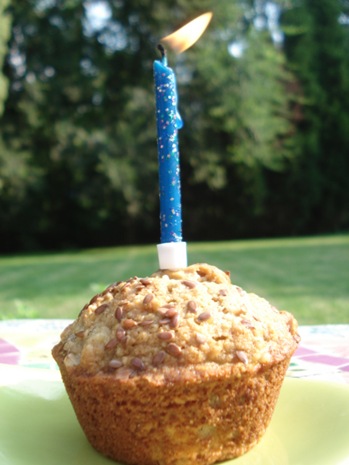 (This was actually yesterday’s muffin!)

OH MY GOSH – I missed my one year anniversary!!!!! I always tell people that I started the blog on September 1, 2007 but when I went to prep for an anniversary post, I realized I really started on August 29 and have been rounding the date – whoops!!! I guess from now on September 1 will be the official anniversary to make things simple 🙂

As you probably know, KERF has come a loooong way in the past year. I can’t believe I’ve photographed almost every meal for a whole year!! I think I have only missed 2-3 meals (forgot my camera once, deleted photos by accident once, and I’m sure there was one more!).

I started the blog as a way to share photos of my meals and recipes with friends and family. I was blogging at Calorie King and my blog there limited me to only one photo per post (or I had to upload them elsewhere first and link over) and since it was a private community, I couldn’t share anything with my mom and Karen, who were the prime audience for hearing out our latest culinary experiments. So I started at Blogger with Sweat, Eat, Sleep, Repeat.

A little ways in, I realized there were bigger and better blog platforms out there and moved on over to WordPress.com, bought the domain KathEats.com, and blogged there for a few months. Then I realized I could be making some grocery money if I got a BlogHer ad, so I moved once again to a self-hosted server (and almost lost everything in the process!) while continuing to use WordPress software. About 9 months later I discovered Windows Live Writer and blogging became much more fun!

I’ve had one too many bumps in the road over the past year – tears, almost quitting a handful of times, lots of frustration, but overall, it’s been a WONDERFUL experience! I feel like I have spent the year making friends, and I look forward to each comment you all leave me. It has been a ton of work (10-20 hours a week, at least) but it’s been one of the most rewarding projects of my life. I am looking forward to more contests, videos, blog dinners, and any other fun interactions I can think up!

THANK YOU, thank you, thank you to all of you who have made this blog what it is 🙂

Here’s to another year!

On to today’s musings –

When we got in bed last night, I did some thinking about our workout schedule and realized we wouldn’t have time for an afternoon workout because we’re due at Karen’s at 6pm to cook her birthday dinner!!! So we planned a morning run, re-set the alarm for 5:15 and closed our eyes.

A few hours later, my body clock did not want to go off, but the alarm did. We debated skipping altogether or trying to get in a short run this afternoon, but I knew we wouldn’t have. I’m big on visualization and pictured myself rushing around trying to get to Karen’s on time and then pictured myself eating breakfast after a run and knew that’s the feeling I wanted, so we went. It was tough. I think I was asleep for the whole first mile. But of course, I’m thrilled we went. Thanks to the husband for going with me so early on a holiday!

I was planning some muesli this morning, although I guess it’s not really muesli because I didn’t soak any oats last night. It’s really just a yogurt dish! 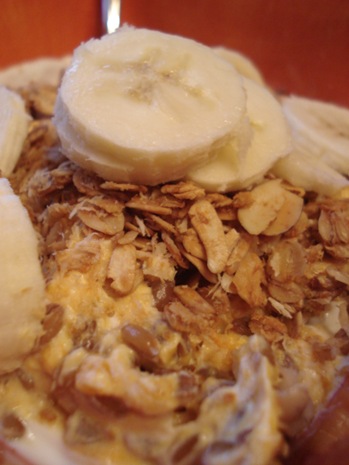 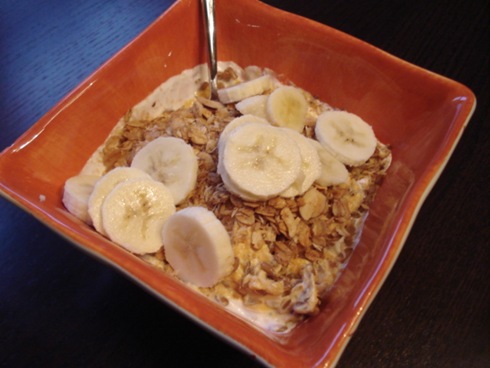 For my hot beverage, I actually had French Vanilla Hazelnut coffee – but only about 1/2 a cup with 2-3 tbsp milk. It seemed to be the perfect amount to not have a caffeine affect. The reason I have such trouble saying no to coffee is the husband LOVES it and makes it everyday and is always like “Do you want me to make you some!?” I’m so tempted by the smell alone that I often say “oh alright.” If I lived by myself I doubt I’d ever make it. 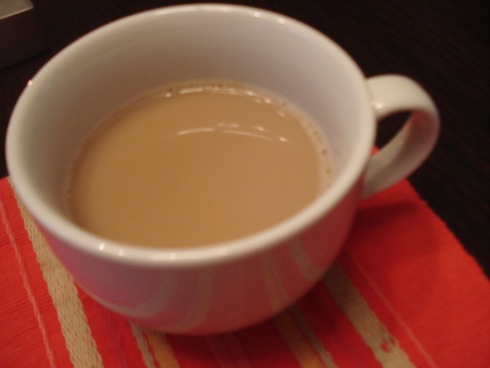 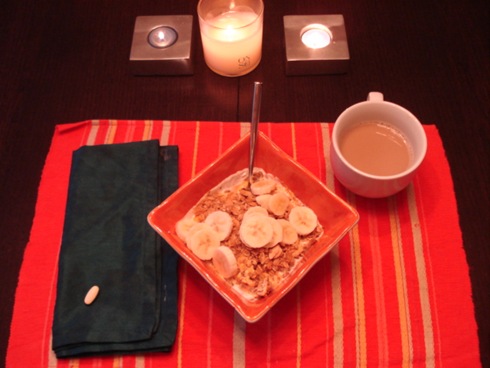 I’m off to O-Chem, then lunch at EarthFare with my friend Erin (I’m trading Thursday for Monday but it could turn into a double week or I might eat at the dining hall on Thurs!), then Chem lab (a short intro one) then we’re off to Karen’s.

Hope you all have RELAXING HOLIDAYS!!!