You are here: Home / Lifestyle / The Fish Flopped, But We Fixed It 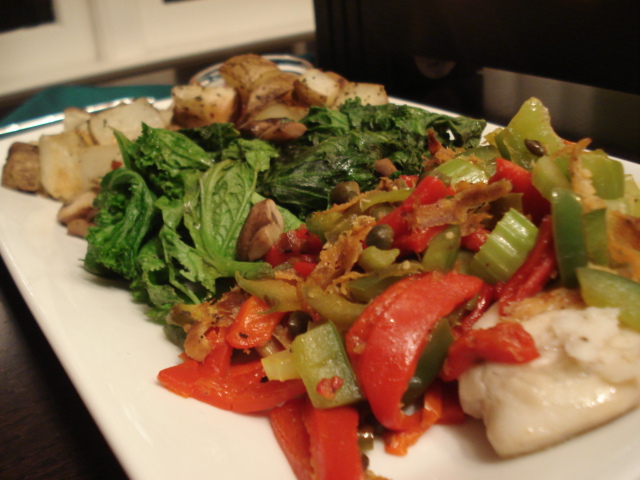 This was another one of those “turned out better than planned” dinners – all because the fish flopped! By flopped, I mean that we used a non-non-stick pan to sear him in some EVOO and he stuck to it. Instead of nice and crispy fish we got a floppy, flaky mess.

Plan B – create a sauce for him to swim around in so the fact that he’s not golden brown crispy doesn’t matter. Worked like a charm!

For the sauce we quickly threw together pantry staples: roasted red peppers, jarred jalapeños, capers, 1 stalk of celery, 1/4 a green pepper. To de-glaze the plan and flavor the sauce, we also added 1/2 an ounce of Sherry. The aroma was fantastic.

Swimming in the sauce… 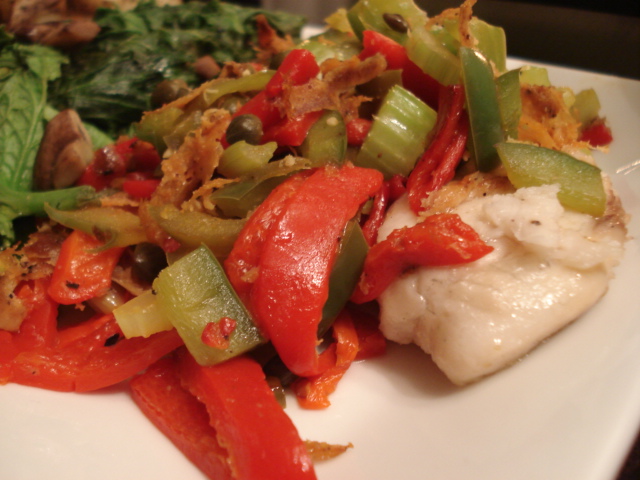 We also sauteed some mustard greens in a little EVOO, cider vinegar, S + P, and a few mushrooms. All were drizzled with honey once plated for a sweet touch to bitter greens. We liked the mustard greens (I think this was our second time making them) but not nearly as much as kale and collard greens. (Sorry the photo is a little blurry 🙁 ) 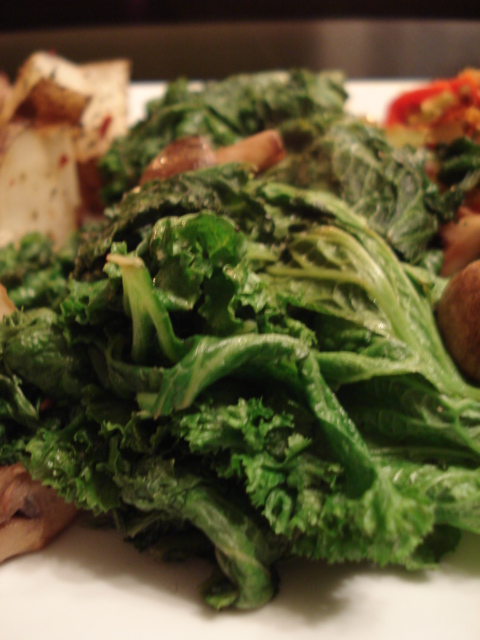 Lastly (well, firstly because these went in 40 minutes before everything else!) we roasted 2 russet potatoes on tin foil with a little more EVOO (each time I mention this the portion is literally 1/2 a tsp – all you need for a little olivey flavor!), kosher salt, oregano and pepper. They roasted at about 400* for roughly 40 minutes. I had 1/3 (~8 oz raw) and the husband had 2/3 of the recipe. 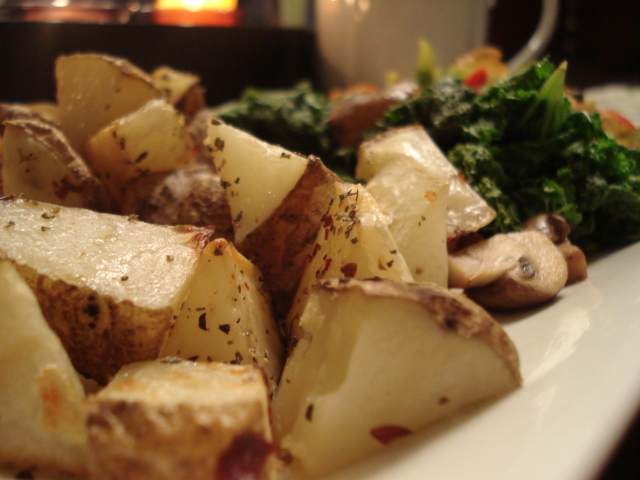 Ketchup on the side! 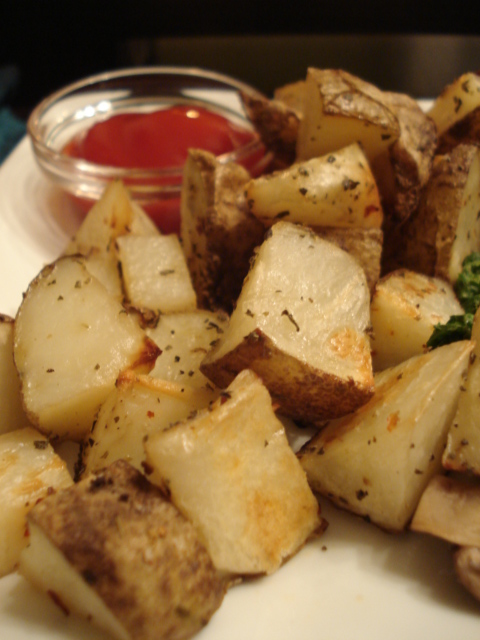 My hot beverage – who can think about ice water this time of year?!? 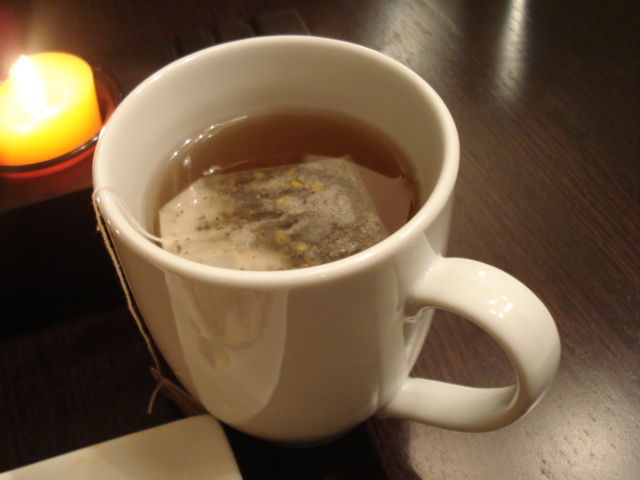 Dinner kcal ~ 440. Not bad for such a variety of flavors and textures. 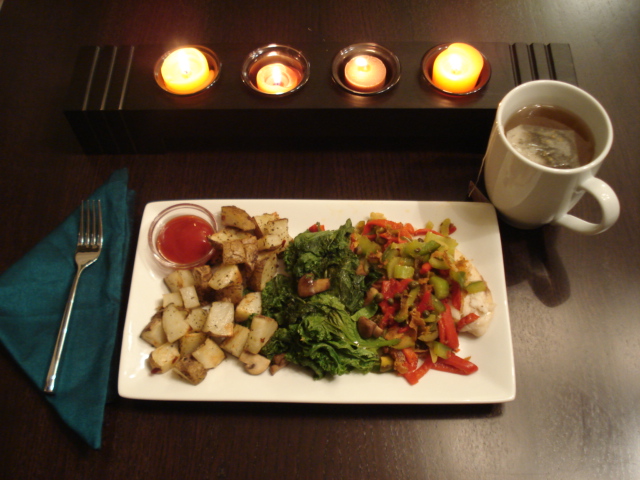 For dessert I had a small pear heated with 1/4 cup of Edy’s Light Egg Nog ice cream (I could only think about eating ice cream with a steaming pear underneath!) and a few of Annie’s Honey Graham Bunnies. (I don’t like these as much as Back to Nature’s Honey Graham Sticks). 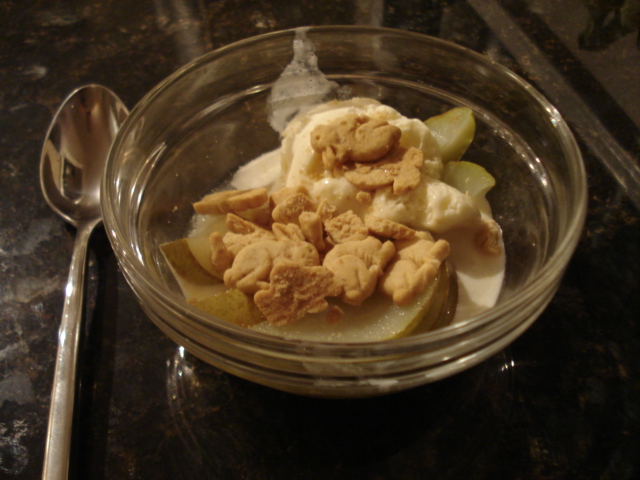 Cream is the Answer

If you’re wondering what magical food will keep hunger at bay it must be heavy cream!! I finished my creamy soup and salad lunch around 1:30 and wasn’t hungry all afternoon. Not only did I not get hungry, I was totally satisfied from tongue to gut. I guess this lunch was the perfect balance of nutrients to keep me on a steady stream of fuel all afternoon. We didn’t sit down to dinner until 7:00 and I was just starting to get hungry then! I did have a cup of tea around 4:30, but it was just plain tea.

Have a wonderful weekend every one 8)