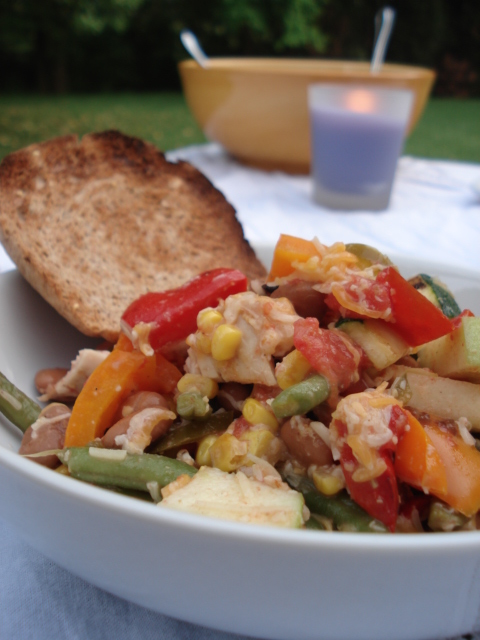 Another Robin Miller hit!!! This meal took all of 10 minutes to throw together, thanks to morphed chicken and leftover veggies. And it was fantastic! Filling and full of variety. I think the green apples were my favorite part 🙂

I pretty much followed the recipe, but here’s what went in:

I think that’s all of the ingredients!? 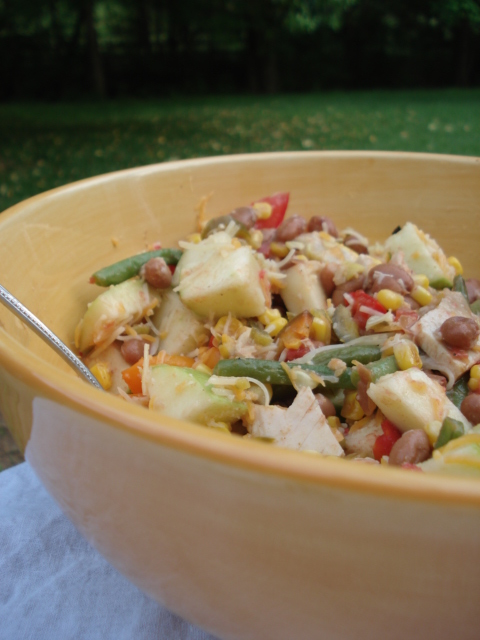 (Some of my ingredients were icy cold and I thought the beans and chicken would be better hot, so I heated the bulk of the salad in a skillet. But it would be great as a room temp. salad.) 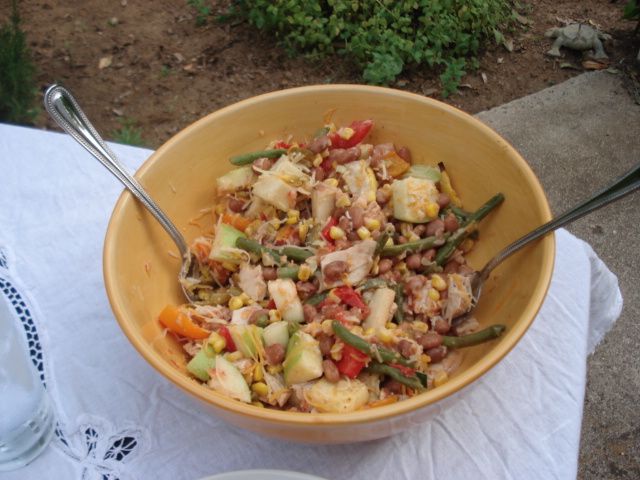 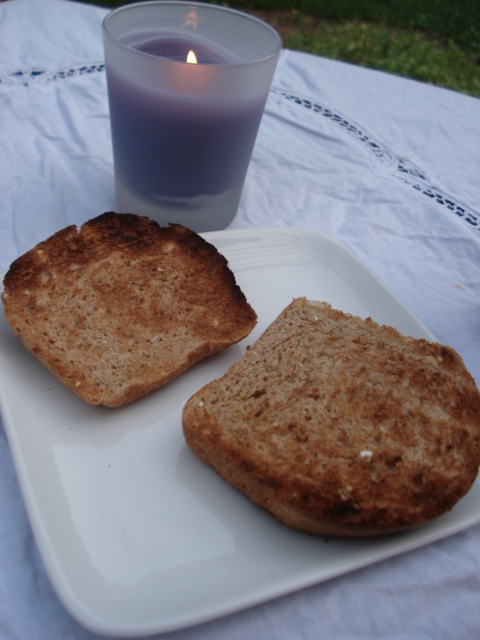 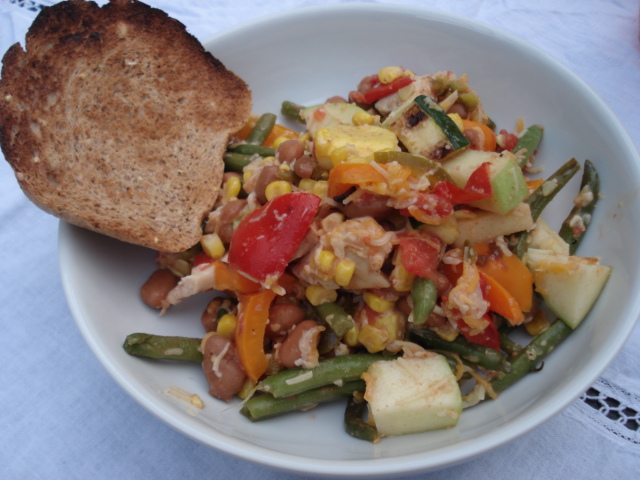 The apples in a salad reminded me of all the wonderful potluck suppers I have attended – good memories minus the gloppy mayonnaise!

This meal was actually a big step for me. We normally make dinners for two and rarely have leftovers. Mostly because I don’t like leftovers or eating the same meal twice in a row, but also because it’s much easier to measure portions and be accurate with the calories when you’re splitting a meal evenly in half. When I was making this salad I was keeping an eye (brain?) on the total calories to ensure I wasn’t going overboard adding ingredients. I reserved some of the beans for later instead of adding in the whole can and was going to not use all of the cheese, but then I decided to just throw the extras in and make it two to three portions and just take what I wanted. So we served from a bowl and I just had a portion that seemed reasonable – no thought to the calories. While I do know that my portion couldn’t really have been more than 500 calories since I know the total was probably around 1000 – 1200 calories, I am not worried/concerned/dwelling on whether it was 350 or 500 calories. That’s all part of the balance.

We have a half membership to a CSA this summer, which means we get fresh organic produce bi-weekly through the fall. Today was the first pickup (although we have to skip 2 weeks instead of 1 for the next). It’s all so GREEN (in more ways than one!)

And a welcome loaf of homemade spelt bread. It’s quite good! The husband has some competition 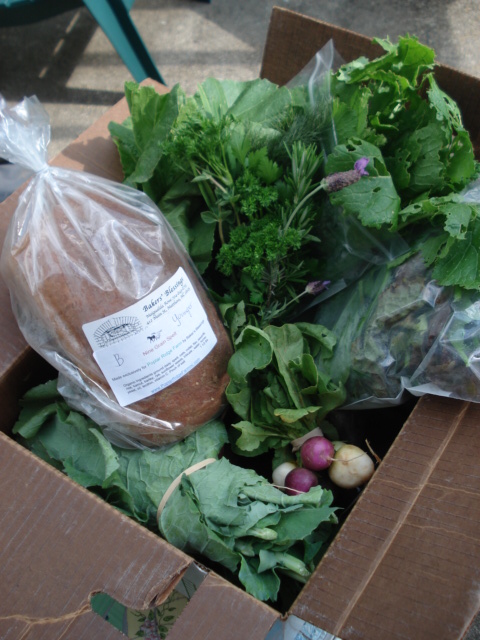 Dentist went well, but I have a “watch on tooth number 19” 😥 Not really sure what that means (guess they’ll just re-check it in November), but I inherited my mom’s teeth so despite the fact that I floss daily and brush up to 3 times a day, I still have troubles.

When I got home I had a wonderful snack of Emmi Swiss Yogurt with fresh raspberries and wheatberries. SO good in yogurt. This was so filing too! 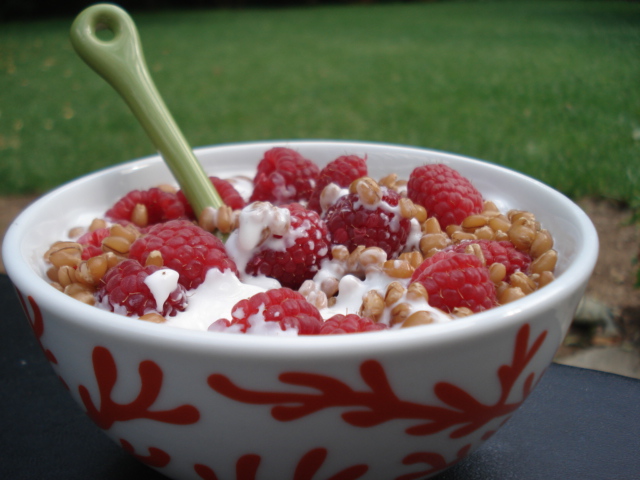 I LOVE this yogurt. It’s actually the opposite of Fage – runny and really sour. But something about it sits well with my palate 🙂 I can only find it at Fresh Market so I don’t get it often, but I had to make a trip there today for chicken sausage for tomorrow’s dinner and couldn’t resist. 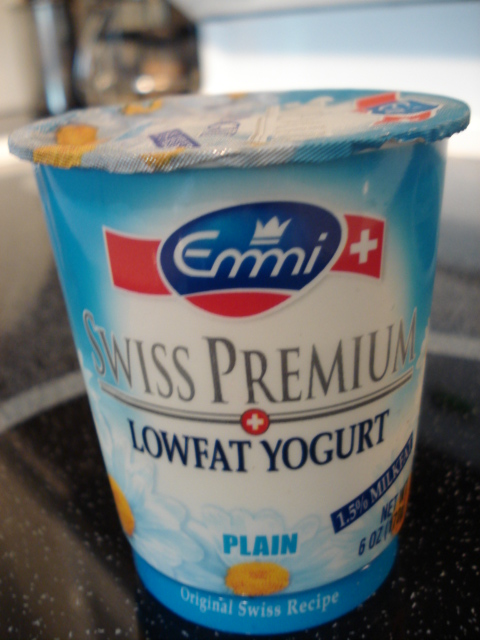 Off to read in the hammock!