You are here: Home / Lifestyle / Message In A Bottle 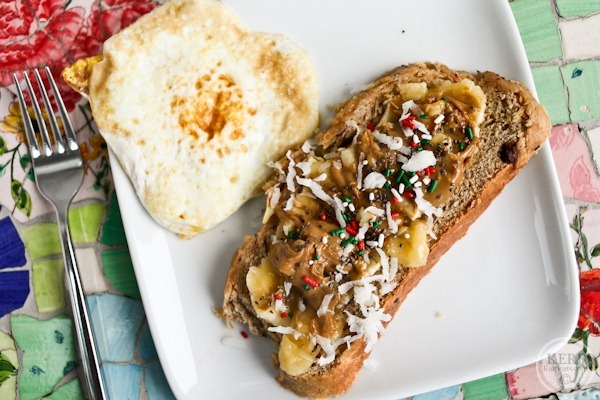 Deconstructed French toast again – an egg over easy on the side plus apple whole wheat toast with smashed banana, sunbutter, coconut and sprinkles. FYI, 1/3 tsp sprinkles = 1 gram of sugar. Way, way less than other toppings, like pumpkin butter or jam. They’re just for fun this time of year! 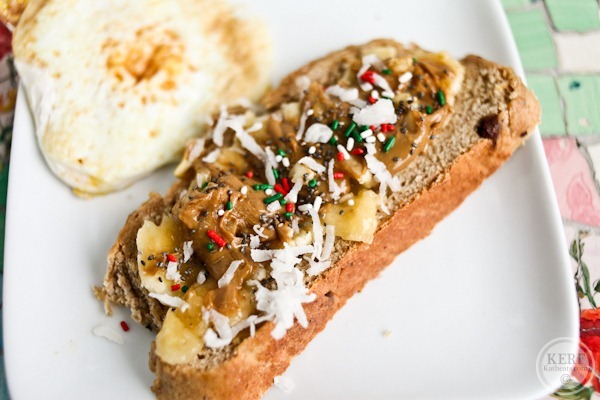 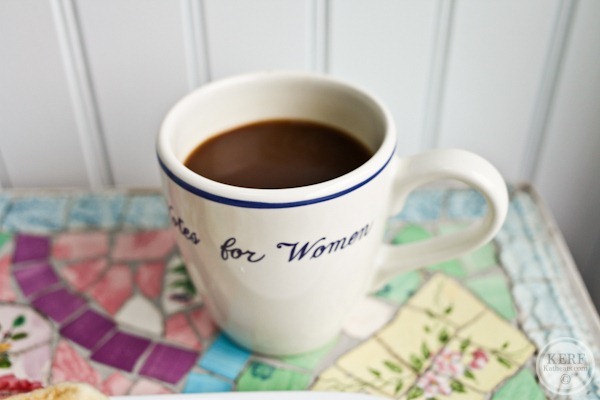 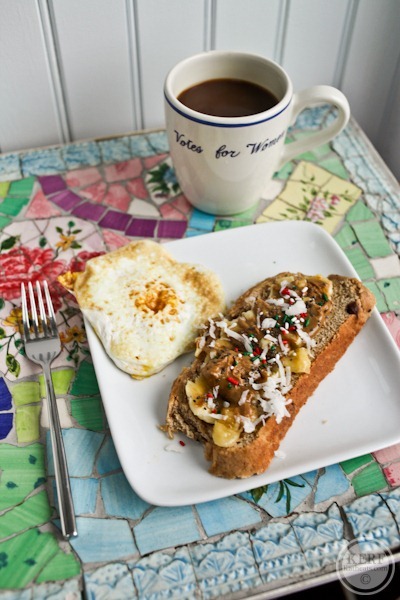 Maze and I played for a while, and napped, and drank milk. 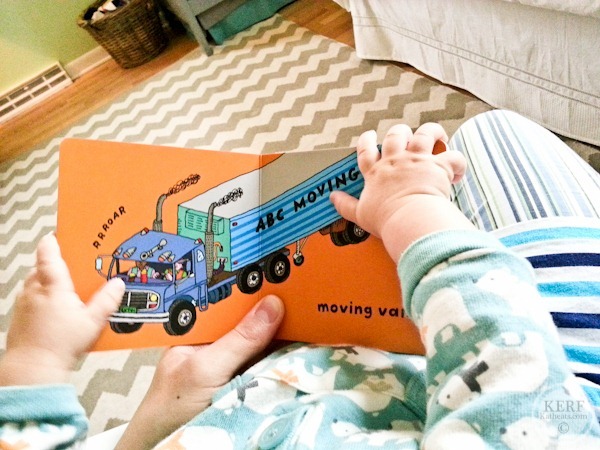 And after his lunch, we headed over to Trader Joe’s for some grocery shopping, followed by a visit to Whole Foods where we met Hillary! 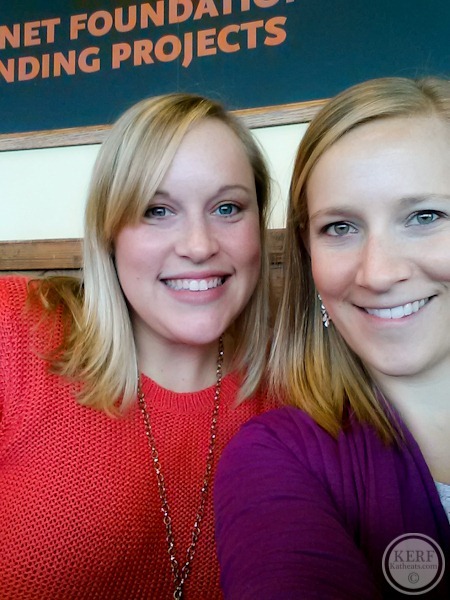 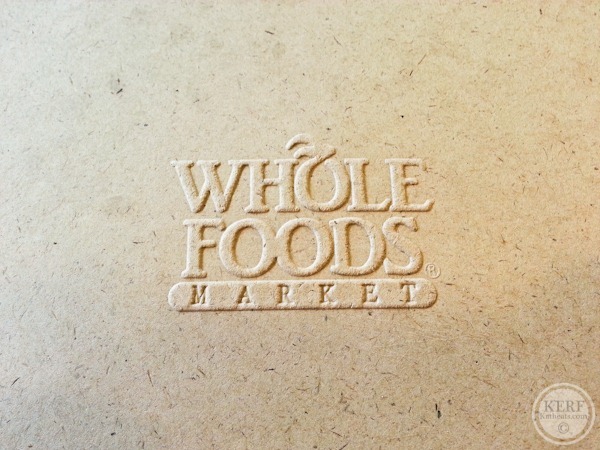 I had a mix of veggies, salmon niçoise, and lots of tofu. Man I love tofu! 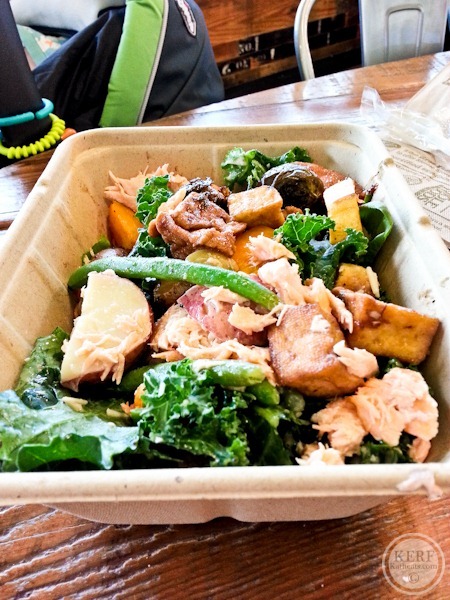 Plus this guy, which was not fizzy at all and I was able to return him for a much better bottle. The customer service guy was very nice and said there’s a consistency problem with the company, but it was probably still in the spectrum of “good.” 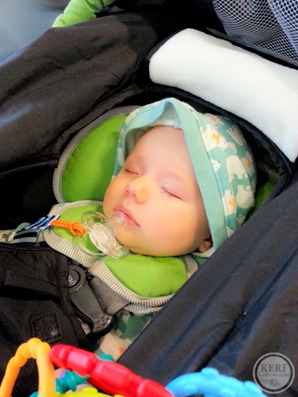 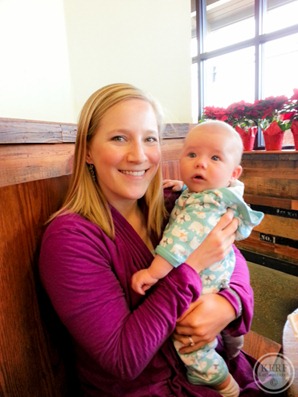 When we got home we went for a walk around town and to the bank. He napped, I chatted with my mom. 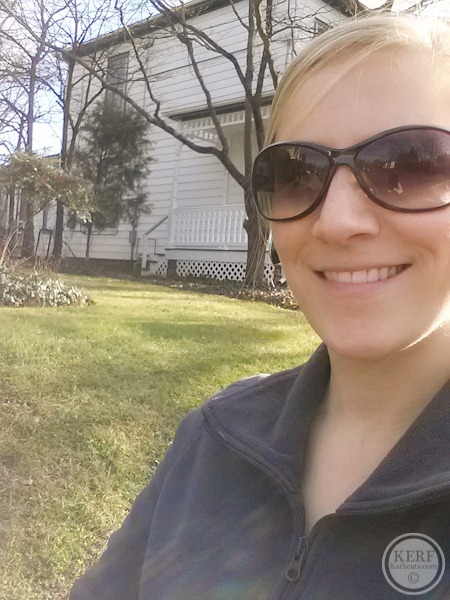 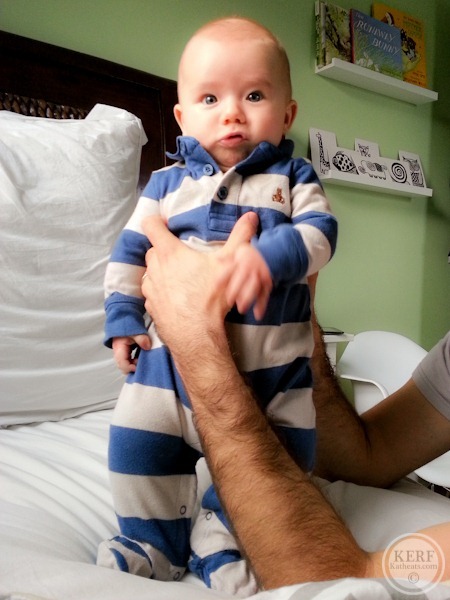 After his afternoon snack, I let the boys play and went to make bourbon balls { <– recipe!} with this guy: 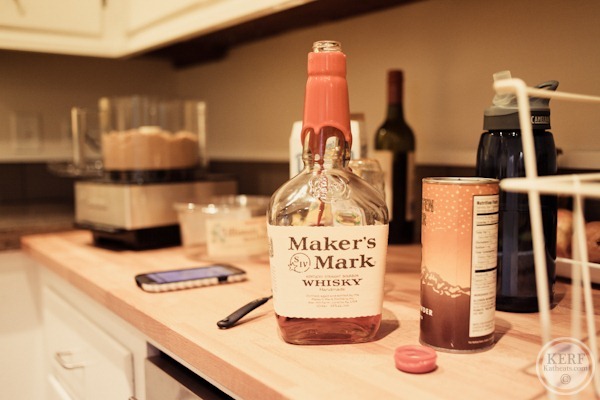 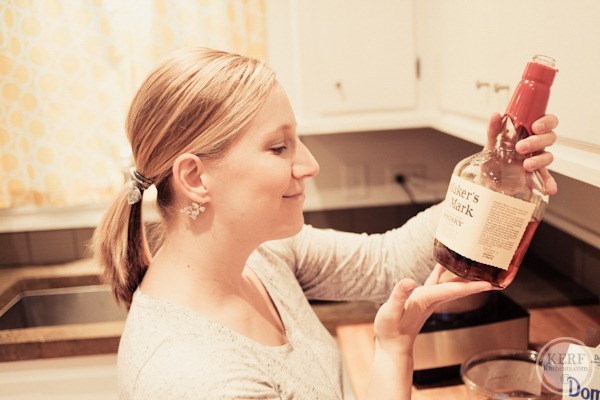 Everyone in our family loves bourbon, so it reminds me of my childhood. I remember my mom used to make bourbon balls for our big Christmas party every year and I would eat them thinking they were regular cookies (I guess my mom wasn’t watching!?) and thought they were SO gross!! But deep down I was forming a life-long love of bourbon. We drank a bourbon from 1918 at my grandfather’s funeral and had a Manhattan toast at my cousin’s wedding. 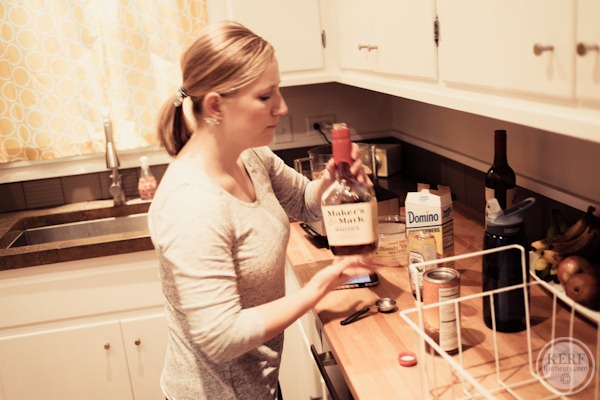 We have two parties to attend in the next few days, so we’ll be toting these along to share. 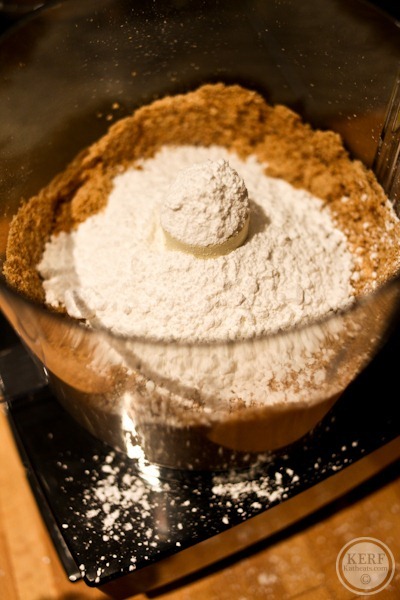 I had a ball as an afternoon snack 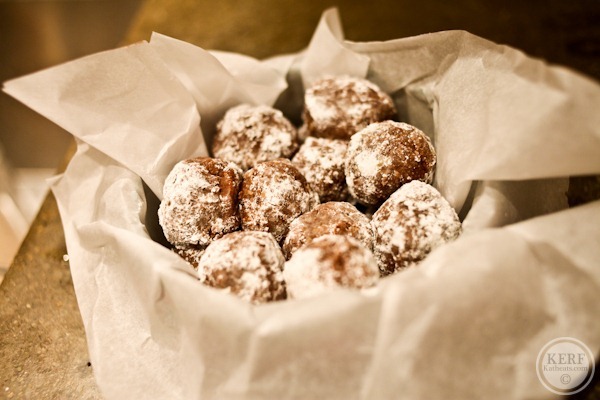 After Maze woke up from his nap and I fed him once more, we headed out on a triple date. We had some holiday shopping to do at Beer Run and decided just to have dinner there while we were out. 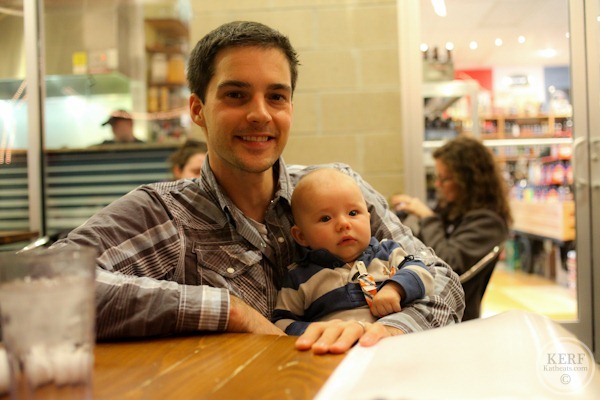 Tastes of the good stuff: a local wheat beer by Devil’s Backbone and Matt had the Dogfish Barleywine 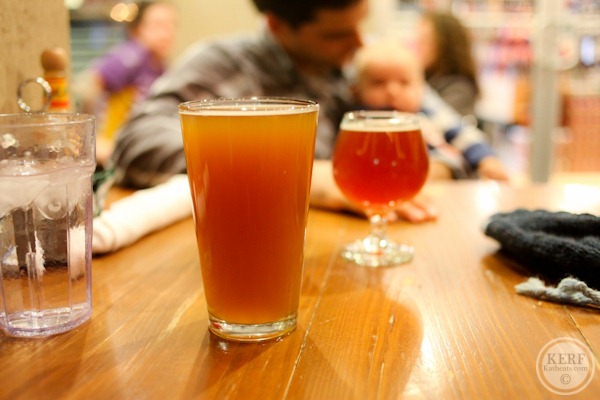 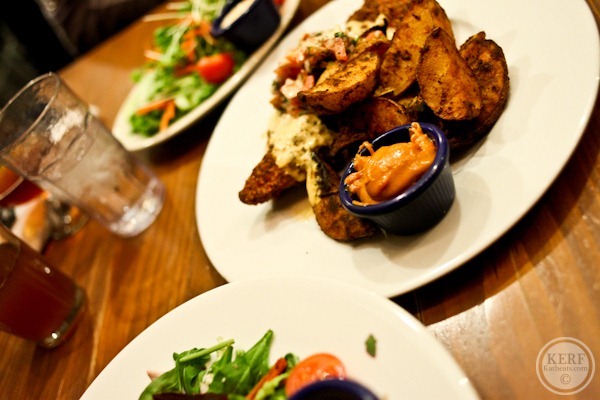 I ordered the roasted veggie salad for dinner, and Matt had the Evergreen. We shared the Fish n Chips on top of each – 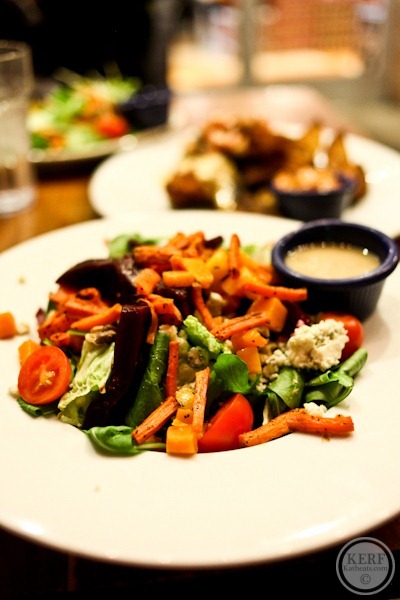 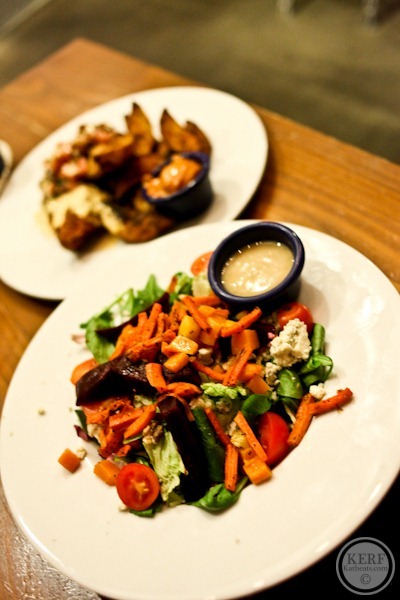 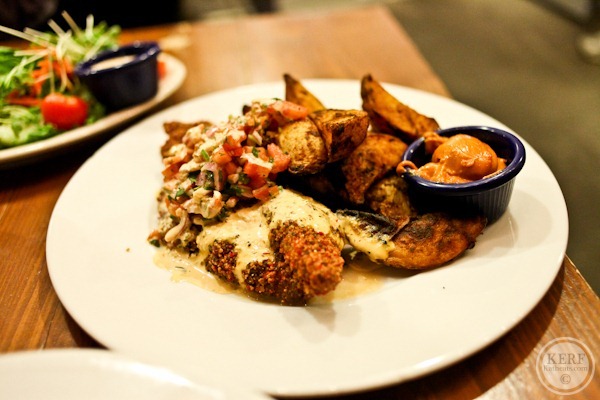 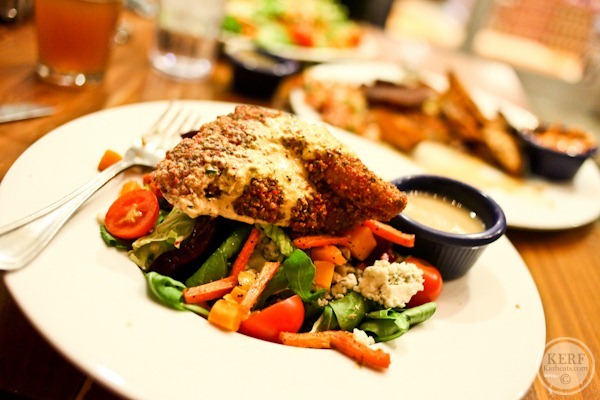 Back home, watching ELF and snuggled up!