I find airplane posts so boring!! Same old backdrop. Some old mediocre eats (most of the time!)

I did score a Vita-Coco at the airport – good for pregnant hydration! 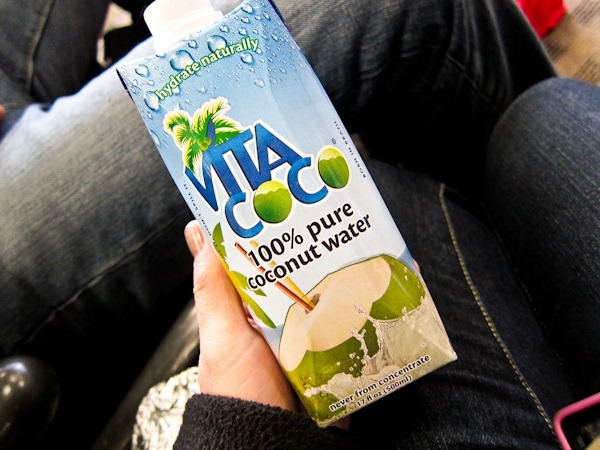 And shortly after we took off, we opened up our sandwiches for lunch.

Mine was swiss cheese, avocado and veggie on the most boring dry wheat bread you could imagine. The cheese was weirdly stacked on one side too, and I didn’t want to dirty my hands spreading it around. I hate to complain, but this sandwich was mediocre at best. Still glad I got it though – our terminal options were limited to Pizza Hut and generic airport restaurant. 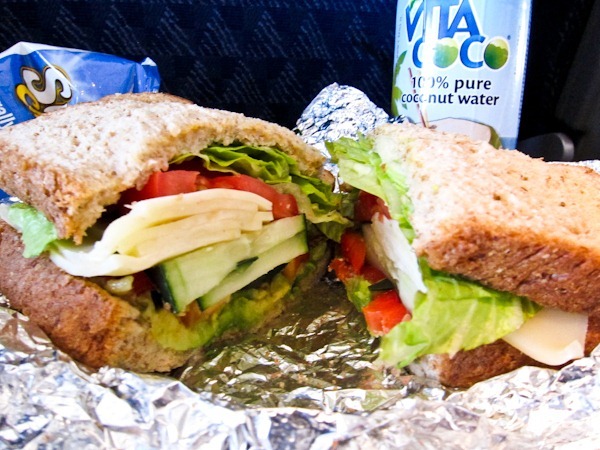 I had half a bag of good-tasting Sun Chips on the side and gave the rest to Karen 2 rows up. 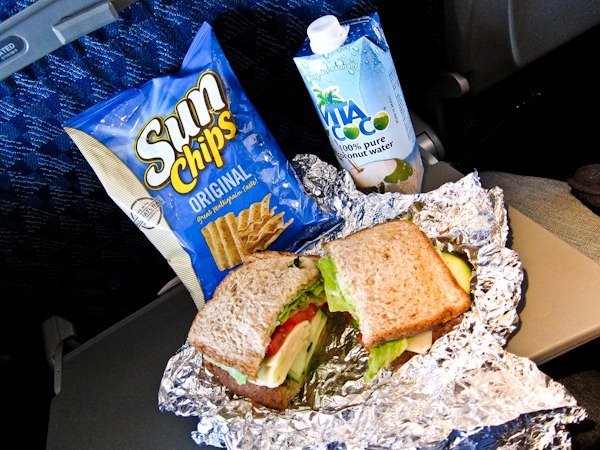 Dessert was the best part – a min bag of M&Ms I got at a convention booth. I ate them one at a time, one every minute for a good 20 minutes or so. Savory the sweet! 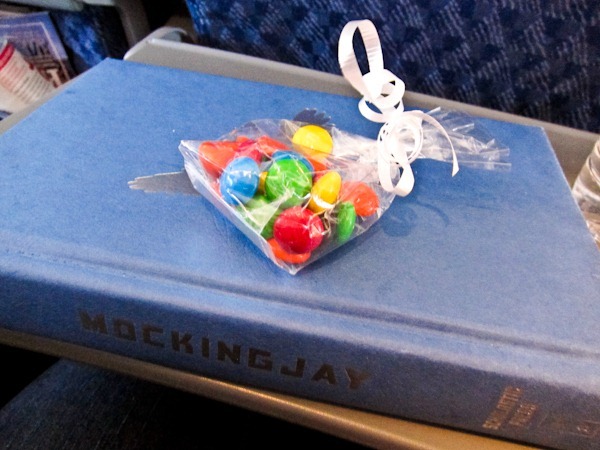 I’m nearing the end of Mockingjay. I haven’t liked this third Hunger Games book that much. Too much melodrama and not enough suspense and twists. I pretty much agree with the rest of the world that book 1 was great, book 2 good and book 3 average. I’d still recommend the series though, and maybe the ending will blow me away. Excited for the movies though!! Hillary and I already have tickets!

I took a snooze after some reading – not sure how long I was out – am going to type up some posts in the meantime! We’re in Chicago now and will be back home in the 11 O’Clock hour. Long day!!

For dinner, which is more like snack time West Coast time, we browsed our options. I really wanted: McDonald’s fries, Dunkin’ Donuts, ice cream and Chinese food. Not foods I’ve craved since I was a kid!!! [Well except for the ice cream

Mediocre meal #3 of the day: We ended up at Frontera by Rick Bayless, which had a really gourmet menu. Matt and I decided to share a flatbread and a salad. 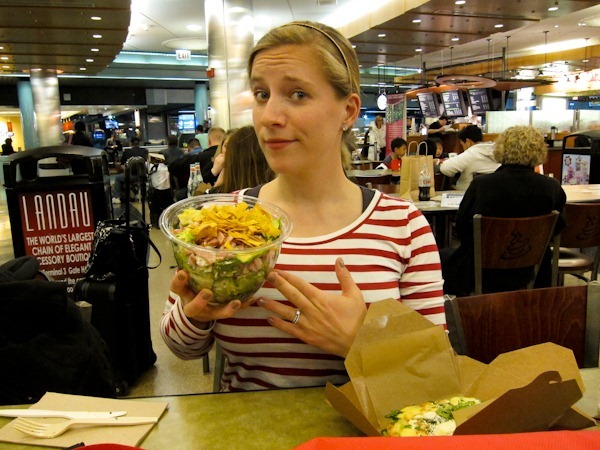 This mini flatbread pizza, advertised as peppers and cheese, and was filled with onions – not on the menu. 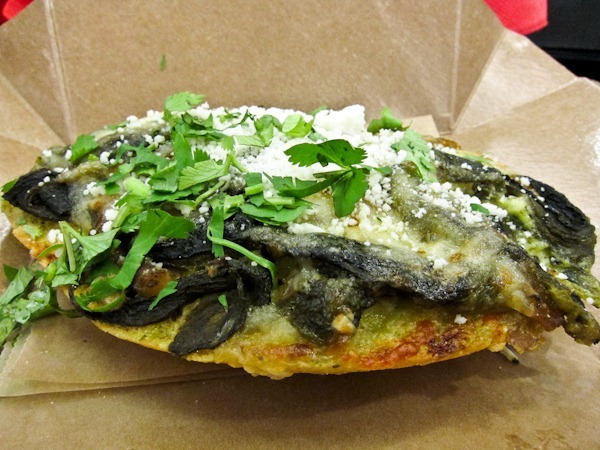 [If they’d been on the menu, I would have accepted the mistake and ate around them]. But the folks were nice enough to trade it back in for the 3 cheese, which was super garlicky. I only had two bites and Matt ate the rest. 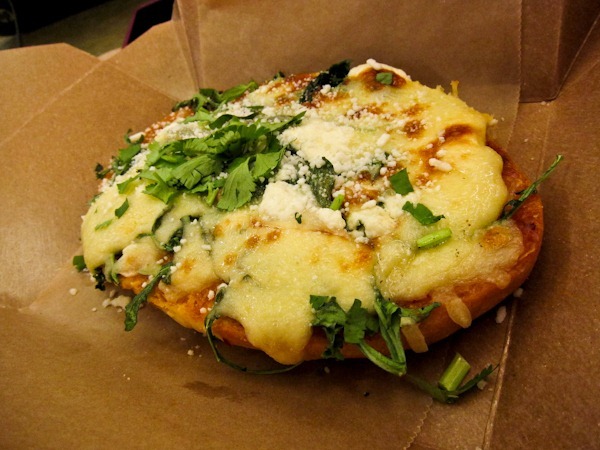 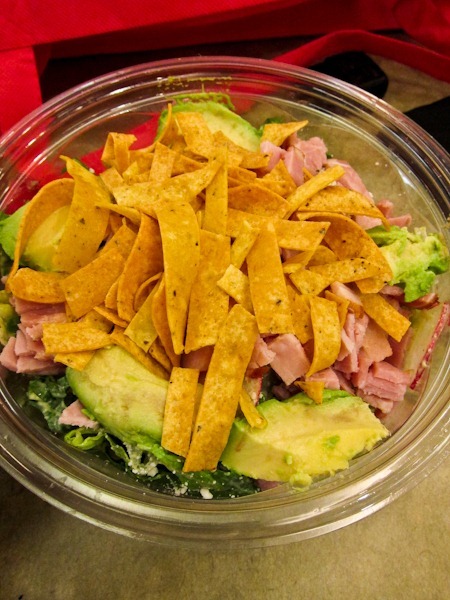 This salad had a lot of potential, but when you see smoked pork on a menu, don’t you think of a shredded, cooked pork? Like BBQ? I was surprised to find it covered in deli ham, which is not recommended for pregnant women! I decided to just eat around it and avoided it as best I could since I’d already taken back one dish. I also didn’t find a single smoked poblano pepper in my salad! The dressing, however, was awesome! 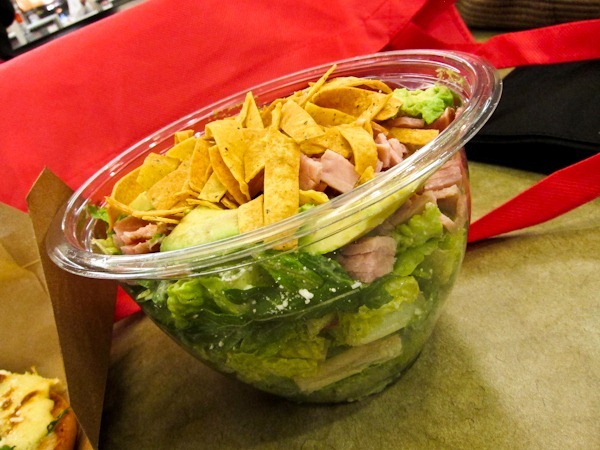 Sorry to sound like such a complainer today, but I just had to be honest about a disappointing day of meals! One truth though: they could have been a lot worse. I’ve been in airports before with only soggy sandwiches and iceberg salads, so I’d give this day a 4/10.

We’re headed to the gate and might grab a TCBY to finish filling me up for dessert.

Hopefully see you for a healthy breakfast!