You are here: Home / Lifestyle / Matt at Home, Chapter 5

I thought y’all might find it interesting to see everything I eat in a single work-day.  Kath believes that I’m a pretty good intuitive eater overall – I eat pretty much whatever I want, I occasionally indulge but usually eat healthily, I don’t restrict myself from any foods, and I eat when I’m hungry.

I’ll say that it wasn’t always like this.  I really love food, and there was a time that I felt like I ate everything just because I wanted to taste everything.  Even now, I refuse to leave a plate uncleaned, I try every single food at buffets, and my inhibitions are inhibited by alcohol.  Still, I believe I follow Kath’s “squiggly-line effect” in the grand scope of things.  So let’s begin!

When I wake up at 3:25, you have to remember it wasn’t that long ago that I had dinner, so I’m usually not too hungry.  Thirst is a bigger problem for me – somehow I seem to get more dehydrated than most people when I sleep.  I usually end up drinking the shower water (cue gross-out noise)!

The bike-ride to work is 5.3 miles, and I ride pretty much everyday that I’m healthy and the weather is good.  When I get to the bakery there’s a big schedule of things to do, but I manage to eat a piece of fruit I bring in: 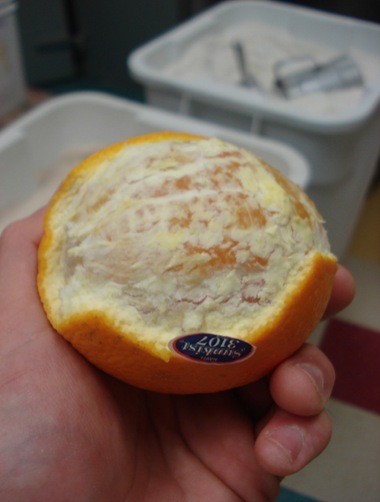 Sometimes I’ll wait about 30 minutes until the sweets baker pulls the muffins out of the oven.  I like our Blackberry Oatbran muffins the best… lots of crispy chew.

I immediately begin making the doughs for the day, one after another according to our varying schedule.  I usually plan the schedule out so that I have just enough time between doughs to wash some dishes, write up schedules and data, consolidate ingredient bins, and prepare for the next few doughs.

After about 30 minutes, I cut a couple slices off a mini-Dakota loaf from the day before and toasted them in the oven.  I topped one with some butter, and the other with some Naturally Nutty butter: 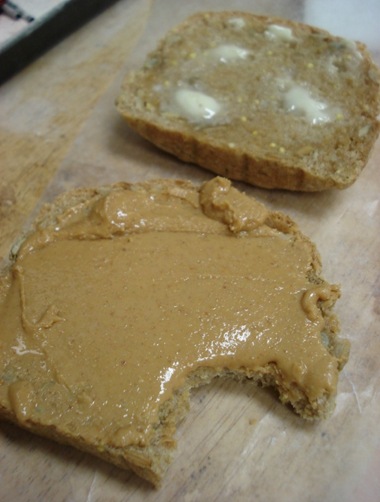 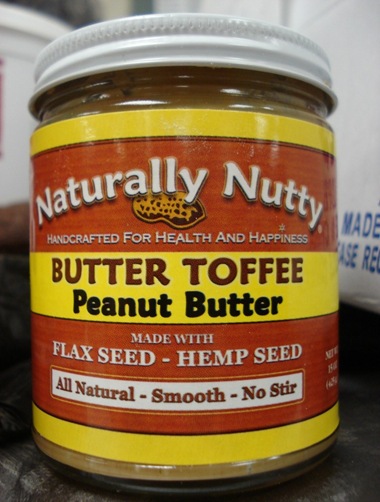 At some point I’ll brew coffee and have a cup in one of my mugs.  Usually I use my big thermos that Kath gave me for Christmas – it’s an Oxo and keeps my drink warm for so long.  But sometimes I need to use my other coffee cup: 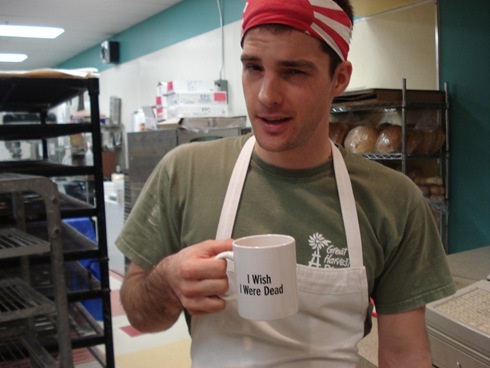 Maybe I’ll have another piece of bread in a couple hours, or sometimes I’ll wait until a special bread comes out of the oven before eating something else (like on Fridays we make Challah, and man it’s good when it’s hot).  Today Mike’s cinnamon rolls were looking pretty good: 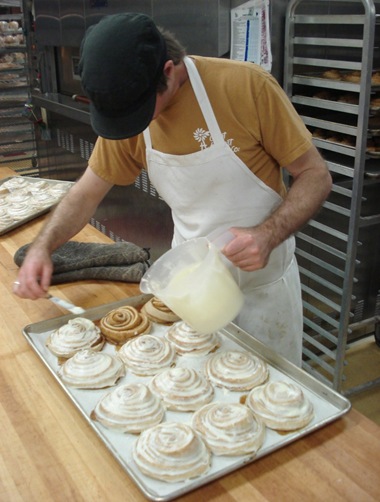 So I had a cini-mini just before we started shaping the doughs at 8am: 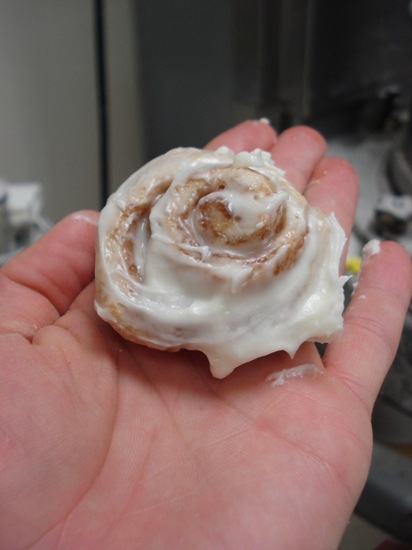 The next 3 hours or so are pretty much nonstop action, and I while I might have another cup or two of coffee, I don’t really eat too much else.  Maybe a taste of dough here and there or a piece of a roll, but this is more to test for quality than actual eating.

I definitely have a problem with boredom eating, but the great thing about working at Great Harvest is there’s always something new to do.  So you don’t really have time to think about the act of eating, which usually leads to making not-so-great choices.  Instead, you suddenly realize “I am HUNGRY!  It’s time for food!”  For me, this happens around 11:30-12.  And that means I get to make the most satisfying sandwich ever!  The grilled cheese!

When we’re scaling out our loaves of bread from giant piles of dough, there’s frequently a small bit left over that can’t quite make a full loaf.  We’ll sometimes bake these mini-loaves for employees to take home, or use them as testers for different experiments.  Well today we had a mini-sourdough hunk, which I promptly turned into a creation: 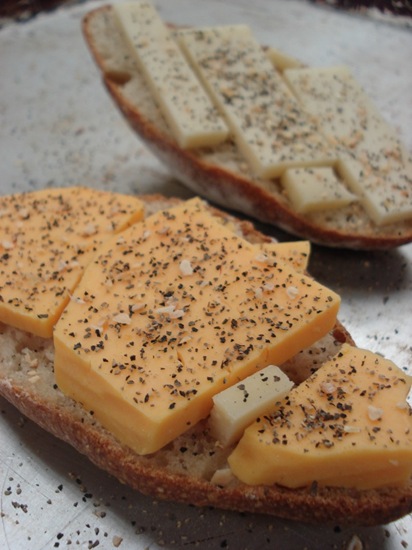 I sliced the little loaf lengthwise, then topped one side with sharp cheddar, and the other with gruyere.  Then sprinkle with black pepper and a few specks of dried garlic.  Pop it in the oven for 10 minutes and voila! 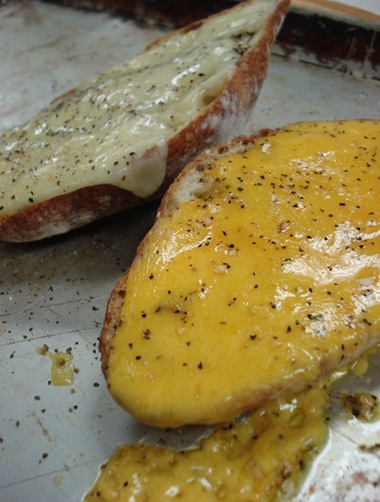 Now the secret to a great grilled cheese – put the two halves together, and then completely smash the bread with all your weight so it flattens out.  NOW you can get your mouth around it! 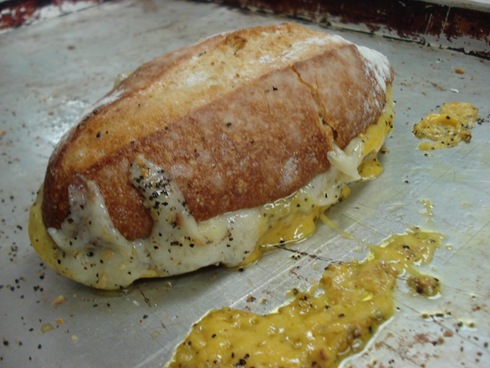 It fills me with happiness.

I usually work until 2pm or so, and then bike on home.  Of course, not before leaving a few bits of mischief around: 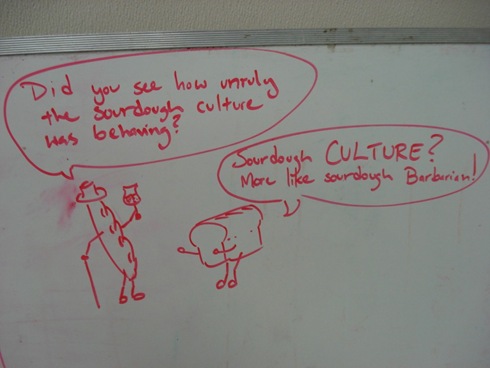 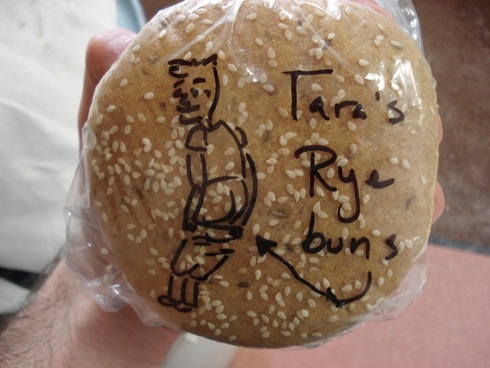 When I get home, I like to take a nap so I don’t look too destroyed during the evening/dinner.  But before that I try to drink some water.  Today I read my newest beer book while hydrating up: 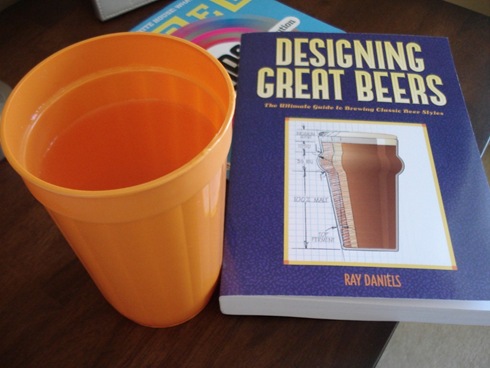 After a nap, I got busy on some taxes (curses!!!!!!!!).  Actually, doing taxes isn’t that bad since I’ve been using taxactonline.com for the past few years.  I’d definitely recommend it if you’re thinking about doing your own taxes.  Pretty easy stuff.

Of course, the agony of taxes needs an antithesis, and for today’s foil I chose a Victory Golden Monkey!  You can find a review here! 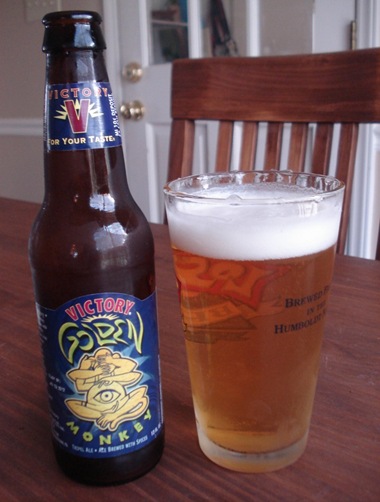 After a solid 1.5 hours of tax work (which got me about half done… seriously, you gotta try this website out), I started making dinner.  I decided to use up one of the soup cans I was encouraged to eat: 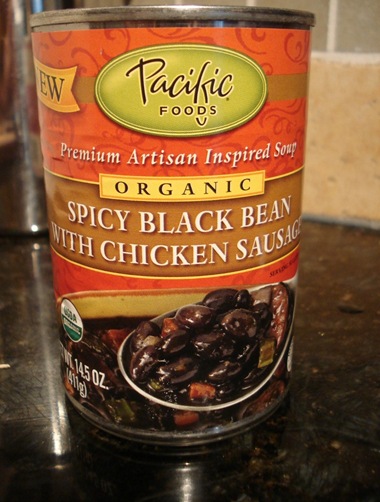 I chopped up a poblano pepper and a pack of mushrooms first and sauteed them briefly. 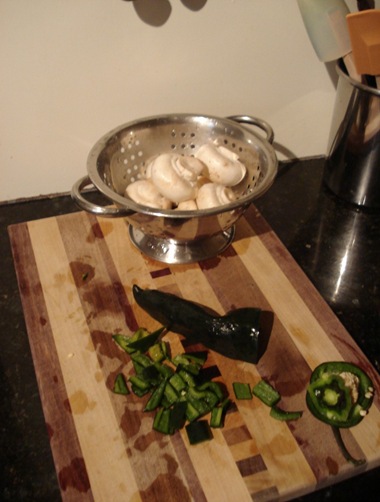 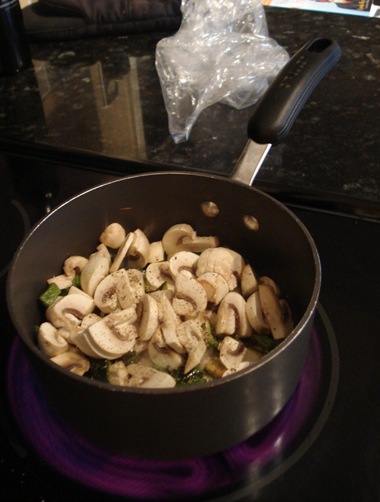 I also found these chickpeas from last week, so I tossed them in, with some typical seasonings (garlic powder, cumin, red pepper flakes). 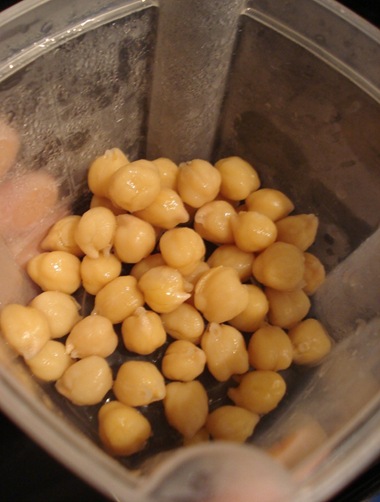 Too bad I didn’t have any greek yogurt for topping: 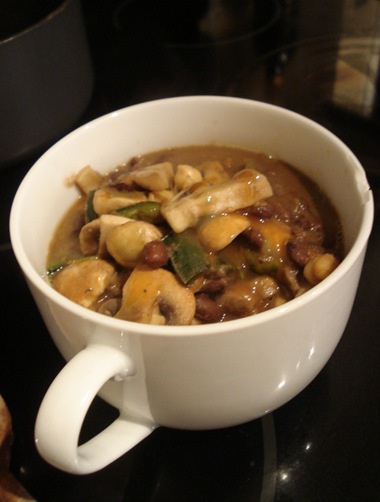 So I put a little drizzle of this mini-hot sauce bottle I got from Buzz for Christmas: 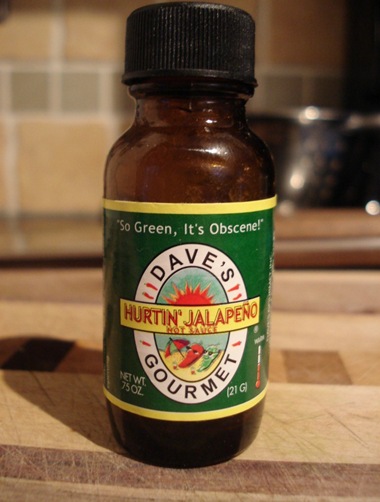 Serve with a giant hunk of wheaty levain: 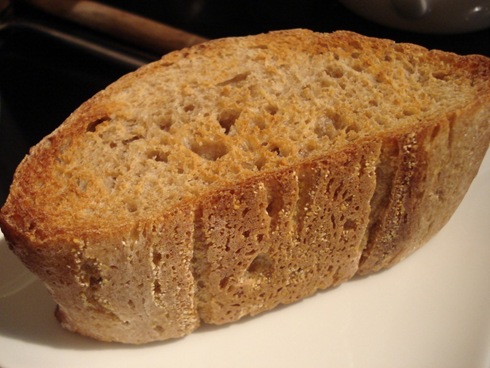 And lastly, have a little blondie for dessert! 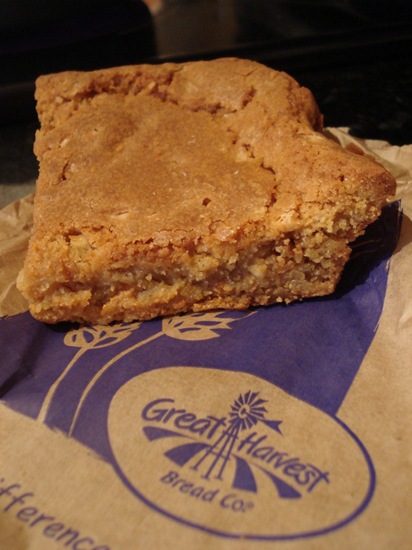 Besides a few little nibbles, and several big glasses of water, that’s everything I ate today!  While it was pretty carb-centric, I burn a lot of calories from 4am-3pm and I’m guessing everything I eat goes straight towards fueling my activity.  I admit I could eat some more fruits and veggies throughout.  I bet some cucumbers and sprouts on my grilled cheese would be pretty awesome…

Now it’s off to bed for an even earlier rise tomorrow since I’m baking sweets!  That means 2:45am wakeup if I’m going to bike!