I asked Anna to do a guest blog post – here she is!!

Hello, it’s the cousin, here!  Well, I suppose I’m not THE cousin since there are several of us all over the nation, so I shall refer to myself as A cousin.

I have been at Katherine and Matt’s for less that 24 hours and it has been a whirlwind of activity!!  Kath was wondering if I would want to work out at the crack of dawn or eat what she usually eats, and my response to this was ‘ARE YOU KIDDING ME?’  I’m so lucky!  I get to hang out for five days with a maven of nutrition and health, it’s like I won five days at a swanky health spa! I told her I’d be happy to do whatever it is that she does every day.

This morning we had the most ridiculously good bowl of oatmeal known to man.  Kath makes her oats with bananas and milk and slow-cooks them all at once.  I can’t believe how good it was. She tells me there is more variation where that came from but I really don’t know how that bowl can be topped. I was still full when we went to go visit Matt at the bakery but don’t worry, I still managed to choke down a couple of samples of bread.  Delicious and grainy!  It’s totally worth it to buy your bread at a bakery, there’s no way a grocery store will ever compare.  I also bought a cheddar and pepper ‘scuffin’ to go.  Apparently it’s a half-scone half-muffin. It’s the Hermione Granger of baked goods. It looks all-good.  I can’t wait to eat it!

After all of that bread we needed something light for lunch so we ate a grilled carrot, pepper, and pineapple salad with some slivered almonds, rosemary, and a touch of lemon salad dressing that Kath made herself.  This salad was very fresh and delicious and balanced out breakfast and all that bread perfectly.  We also had a bowl of black bean soup that was fantastic. Matt made it!  I CAN’T WAIT FOR DINNER!

Sorry if I wrote too much about the food, I know Kath tells ya all about it every day, but I had to second it so you all know it’s fab!

Tomorrow morning we’re waking up at 5am to go to a spin class!  I hope I can make it all the way through!

I spent 2 hours this afternoon preparing for my Micro exam at Caribou Coffee, which I think is far superior to Starbucks. The smell of coffee was just so tantalizing that I had to get a cup! I ordered a half decaf steamed milk coffee – LOVE frothed milk! I don’t know if it’s the weather or what, but I have totally been craving coffee lately. 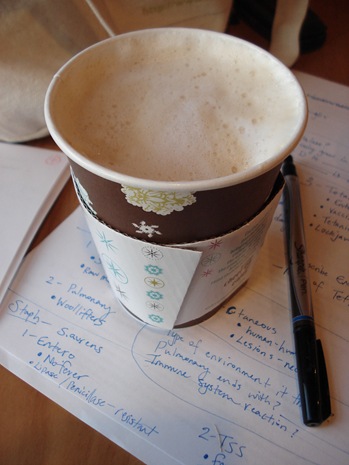 My test went well (enough) 🙂 SO glad to have those two tests out of the way!!!

I came home to find Anna and the husband drinkin’ beers! So I had half of one myself – pumpkin! (Split it with Anna) 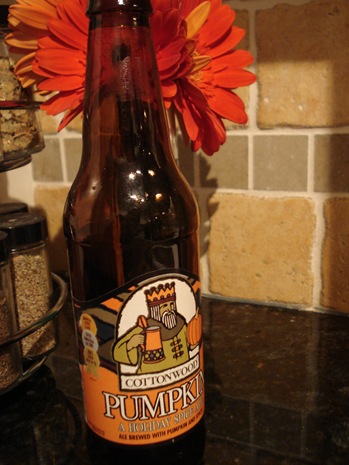 For dinner tonight the husband made Sweet potato + Mushroom Maple Risotto. He just roasted sweet potatoes and mushrooms in the oven and prepared risotto with homemade chicken broth. After they were all cooked, he combined them with some maple, salt and pepper. We also had some frozen spinach for a quick side dish. I just seasoned with S+P and allowed each person to add whatever flavors they chose. We unanimously chose Bone Suckin’ Sauce! 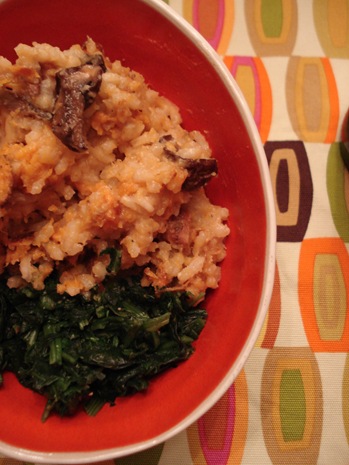 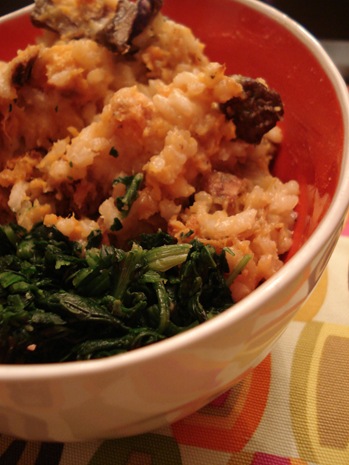 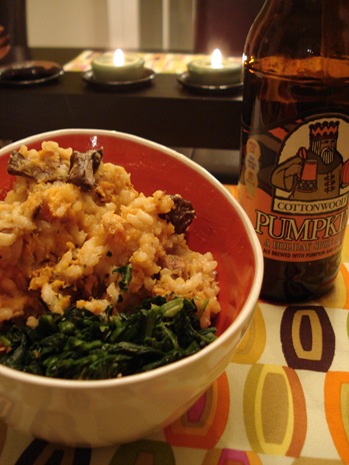