It was a nice cool morning to bring out the rice cooker! Matt had to work from 6am-6pm so I was alllll bbbbyyyy myyyysellllf. 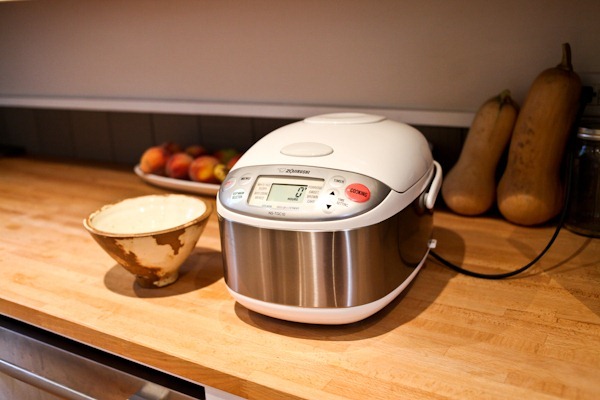 I put Coach’s Oats in the night before with cinnamon, raisins, a pinch of salt and water. Kept it simple to dress up in the AM. I put it on the porridge setting and set the timer. 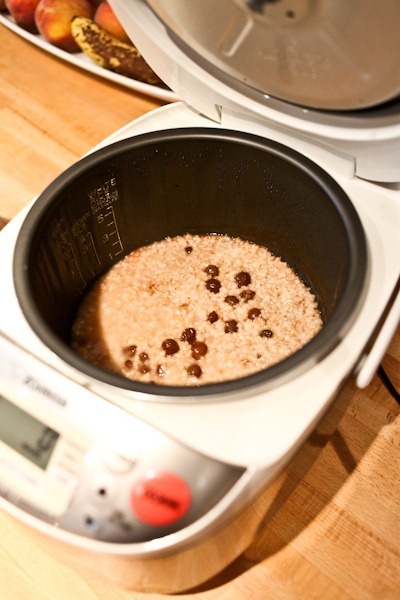 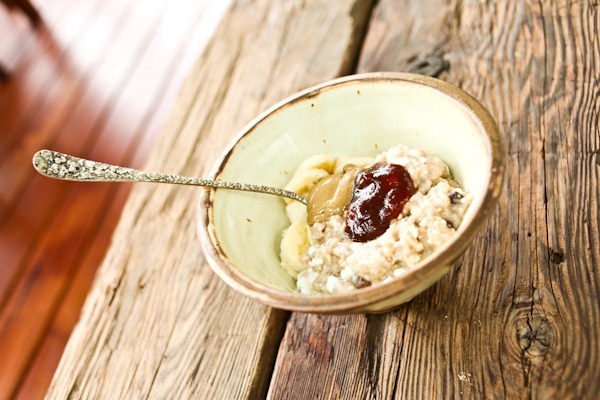 Dressed up with cottage cheese, banana, sunbutter and apple butter KERF reader Cathy sent me from Canada in addition to a beautiful baby sweater! 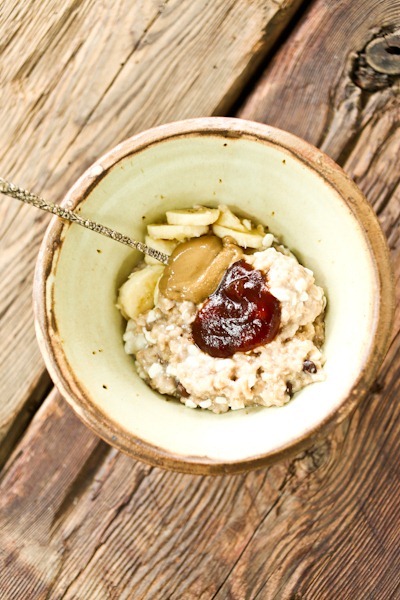 Mazen wanted to eat halfway through my bowl so I had to go back and eat the rest cold. You guys always think taking photos of food makes it cold, but not so! I am fast. But baby however, he was not fast : ) 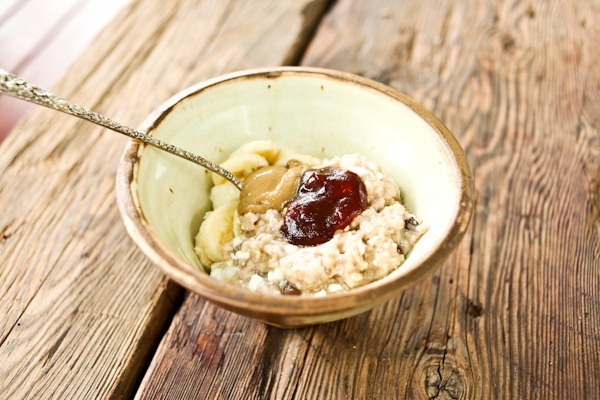 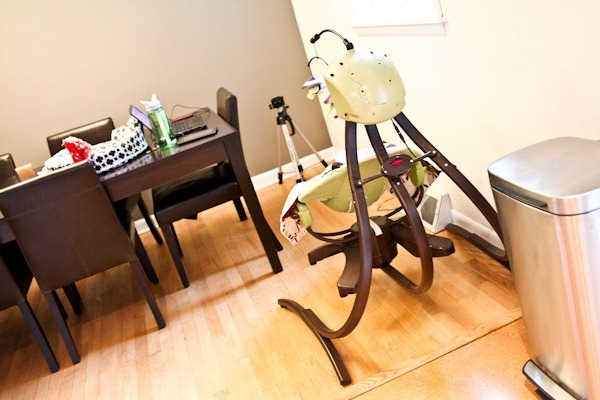 He is so-so about his swing. He has to be happy first to be happy in it. Hoping he learns to like it more. I sure wish I could climb in and swing the afternoon away! 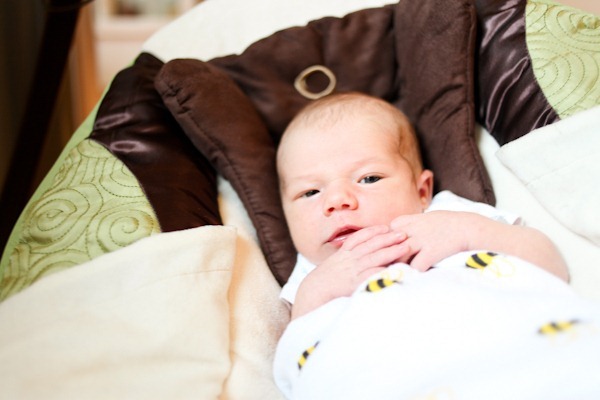 Mid morning I was getting a bit of cabin fever and decided to go on an outing. I desperately need nursing bras and our hospital has a lactation corner with all of the Bravado brand ones, so rather than ordering them blindly I went in to try them on. 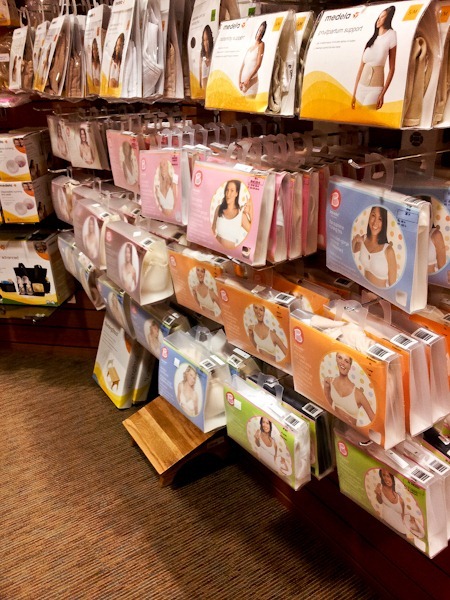 You guys were right – the Bravados rocked!!! I got the Body Silk Seamless Bravado, which I was shocked at how supportive it was for being so stretchy, and this Medela one that was also very very supportive. Plus one of those uber expensive Bravado tanks – it was very comfy too! 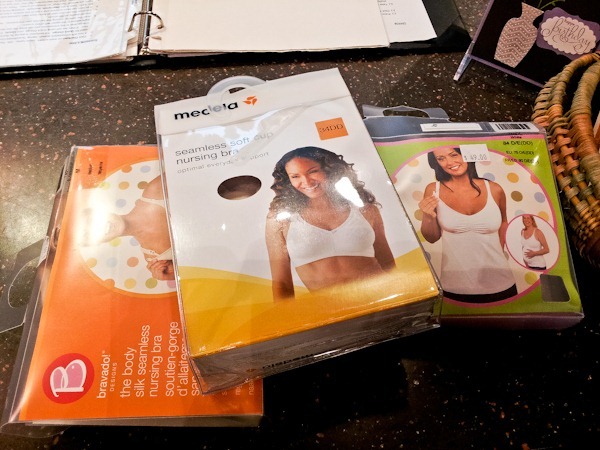 Maze was VERY good in his car seat on the drive there (although I hated not being able to see him!) and he slept while I tried on bras. It wasn’t until the ride home when I had just decided that I was brave enough to make another stop by the bakery that he screamed bloody murder in the back seat. Sitting through red lights was terrible! I bolted home and fed him right away. The car is probably the worst place to be stuck with a hungry baby because there’s no way to feed them! That and maybe on a stroller walk far from home. I need to keep that in mind… 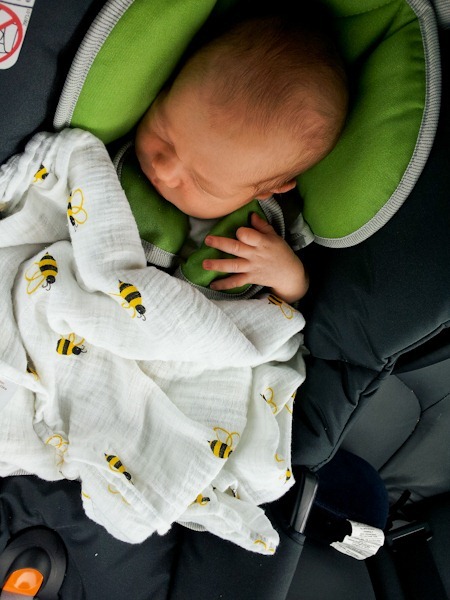 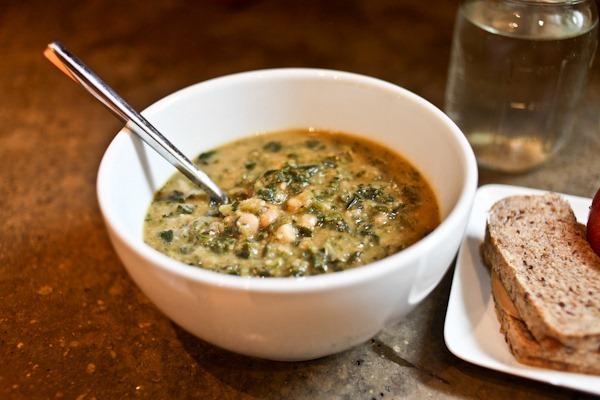 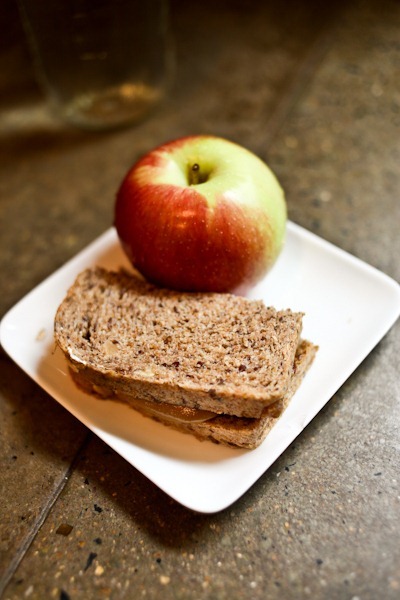 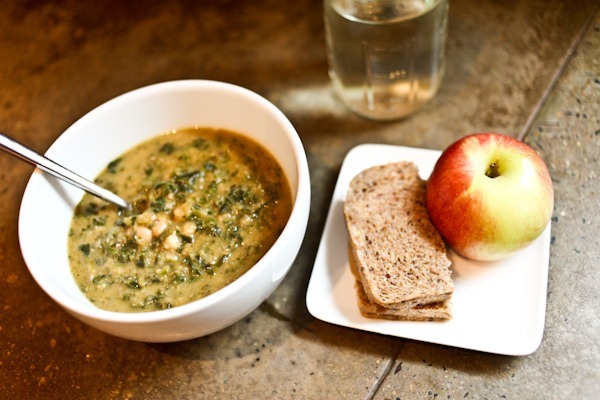 Handful of choco-peanuts we brought home from the hospital. I was bored and snacky! 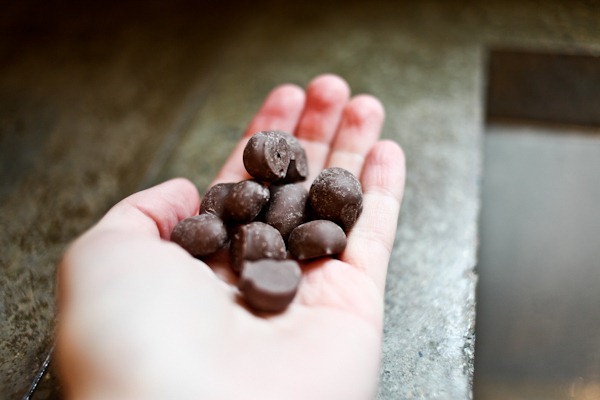 After I finished my few projects for the day, Maze and I went to hang out in the basement. We nursed, watched SYTYCD (WHO WILL WIN!?!? I love them all!!) and took a 30 minute snooze. 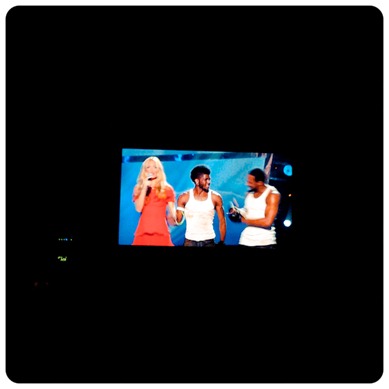 Outfit change #3 – I don’t think he’s ready for these pants yet!! Haha. 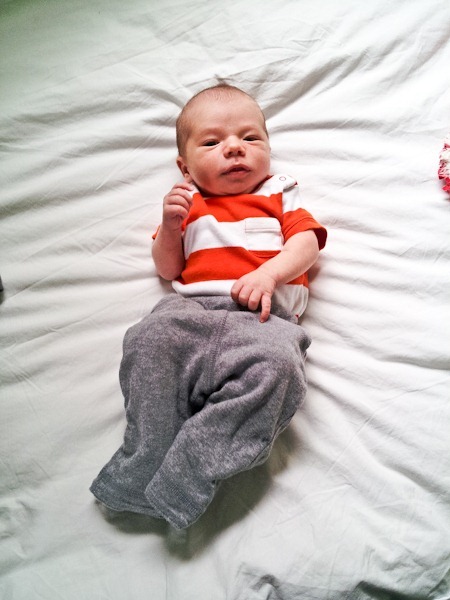 McScreamy takes a while to settle down sometimes, but then he’s happy in his wrap 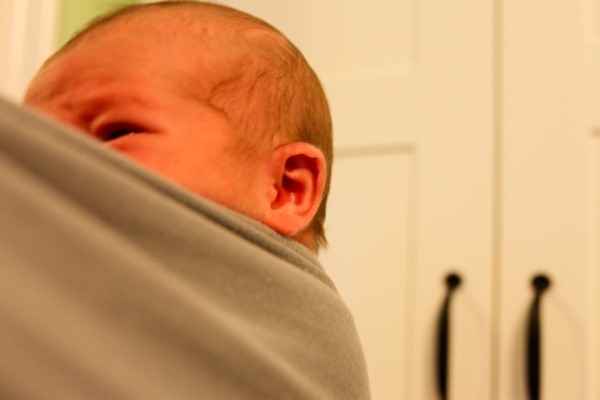 My friend Jessica came over for a visit and we attempted a walk around the block in the stroller, but M was too hungry for it and we had to come right home. Date ball to tide me to dinner. These are my favorite homemade snack ever! 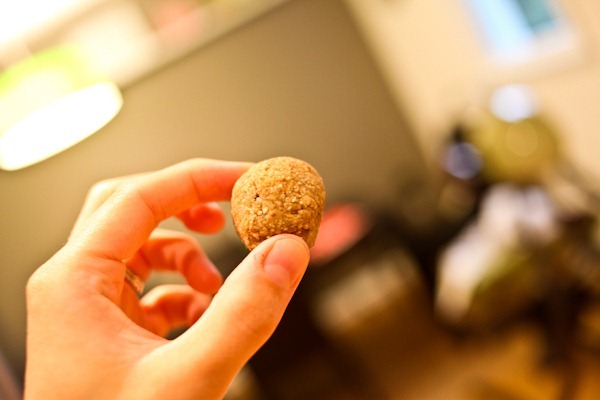 Dinner tonight was another from one of our awesome friends – Katherine brought over Chicken Parm and a fabulous salad! 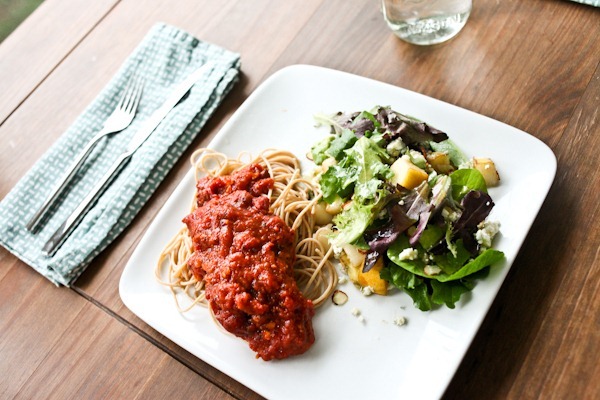 I mean this in the most complimentary way possible, but my friends cook like moms. Their food tastes so much better than ours! It has an extra layer of delicious inside. 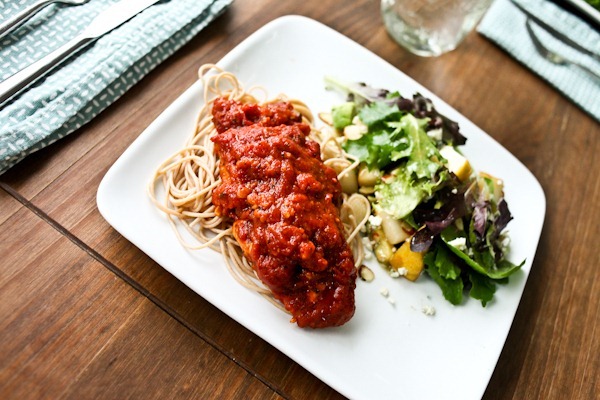 Katherine’s salad had so many goodies inside – bleu cheese, pear, almonds! 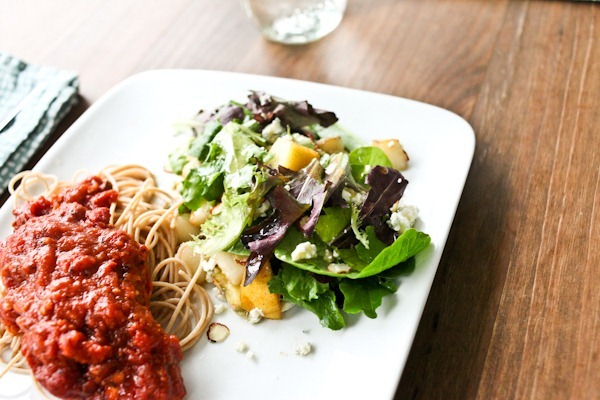 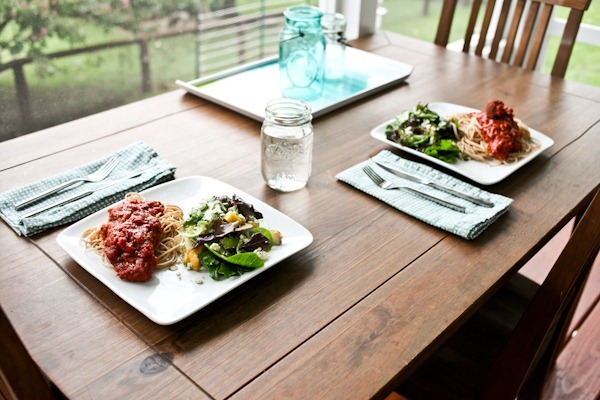 Still trying to figure out how to eat with a baby strapped on me : ) 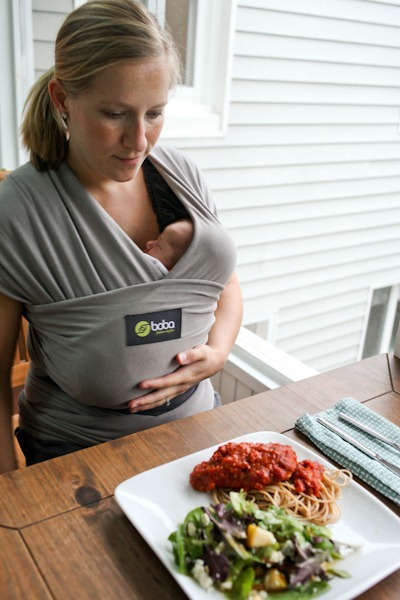 So scared I’m doing to drip down on him! I do a lot of turning 90* and leaning in. 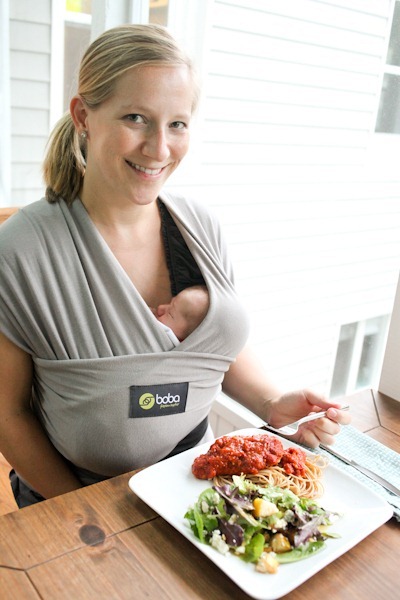 For dessert, Matt had me taste test two kinds of Autumn Spice Granola they created at the bakery. It’s AWESOME! We’ll definitely add it to our online store when it’s time! 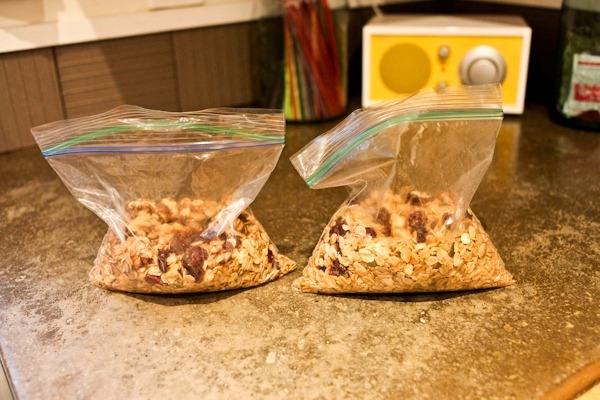