You are here: Home / Lifestyle / Invited To The White House

^^Add that to my list of coolest blog opportunities!! 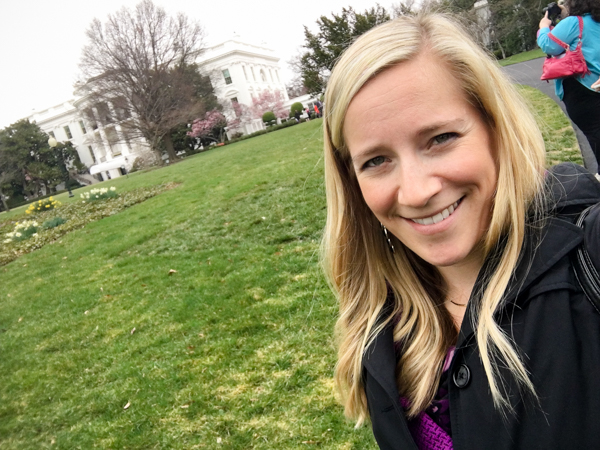 Yesterday I spent the morning at the White House with about 100 other bloggers learning about the First Lady’s Let’s Move campaign. And Mrs. Obama made an appearance herself, which was such an honor! 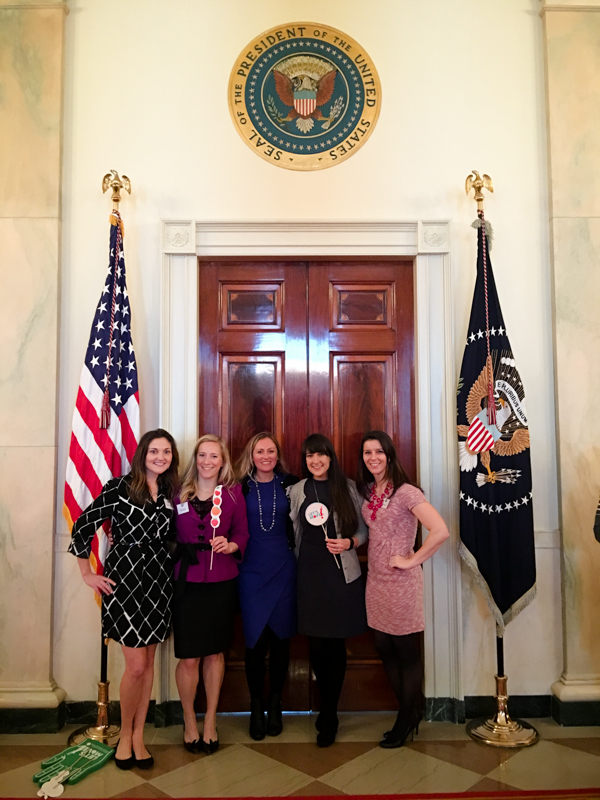 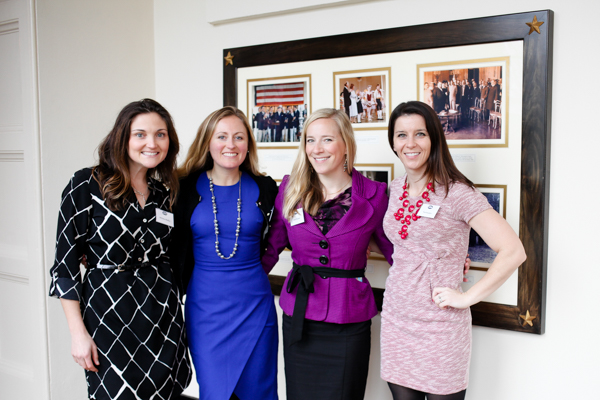 Our program started with a tea and coffee reception along with some live piano! 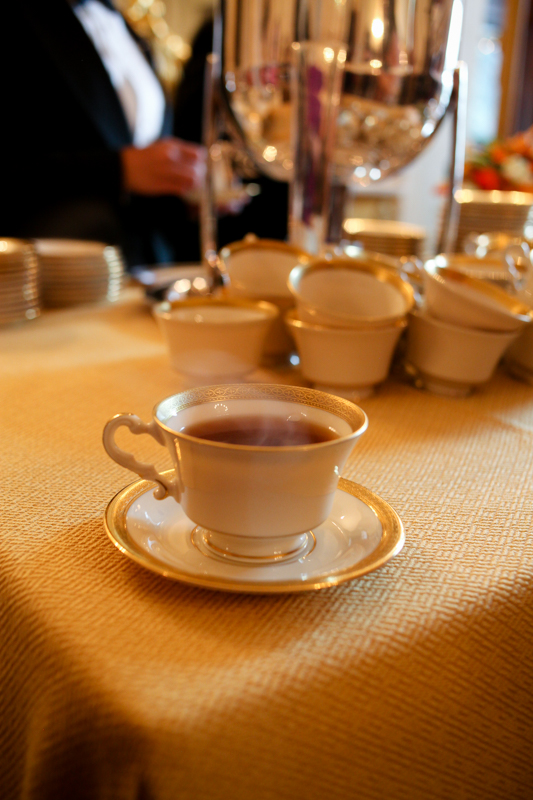 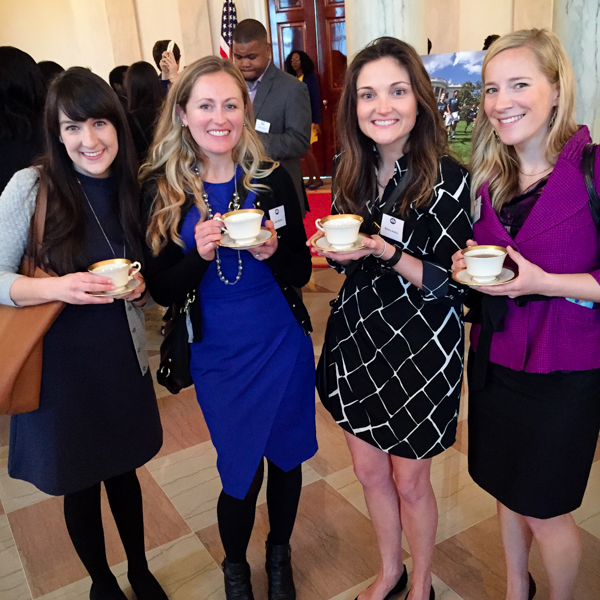 We settled into one of the ballrooms for a morning of talks from the leadership behind the Let’s Move campaign and other health-related departments such as the President’s Council on Fitness, Sports & Nutrition, the USDA, the White House Executive Chef, and the Department of Health and Human Services. Let’s Move is the parent name for a ton of different initiatives including more activity in schools, salad bars to schools, getting Americans outdoors, and more. The team has done so many great things to help kids have fun learning about nutrition and physical activity.

Special guest Dominique Dawes (three-time Olympic champion!) spoke. So cool to meet her, and she was hilarious too! She’s a mom of two young kids, and told us that she put peas and spinach in her kids’ ice cream : ) 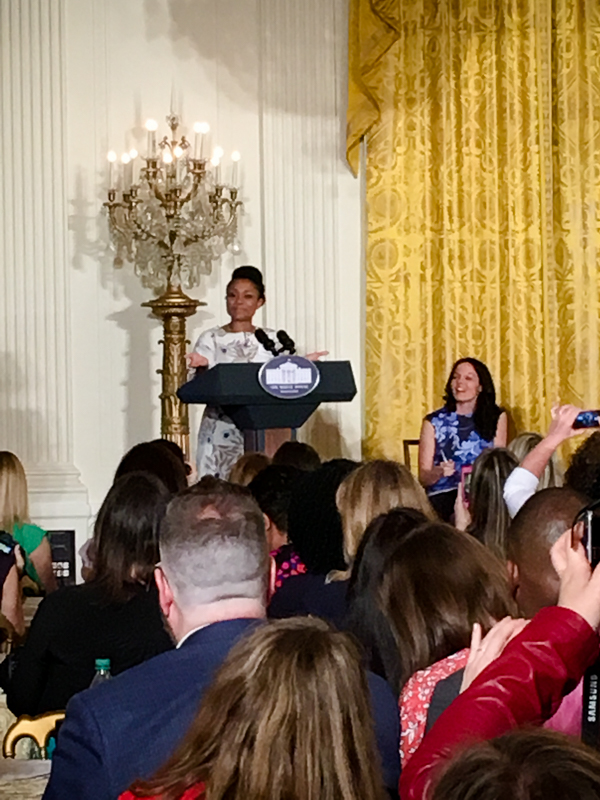 Other highlights included the new F and V brand, which was created to give fruits and vegetables the same kind of attention that big brands like Nike get. Check out which celebrities are endorsing healthy eating – the creative is actually REALLY funny!!

And this focus group with kids that had me laughing out loud!! 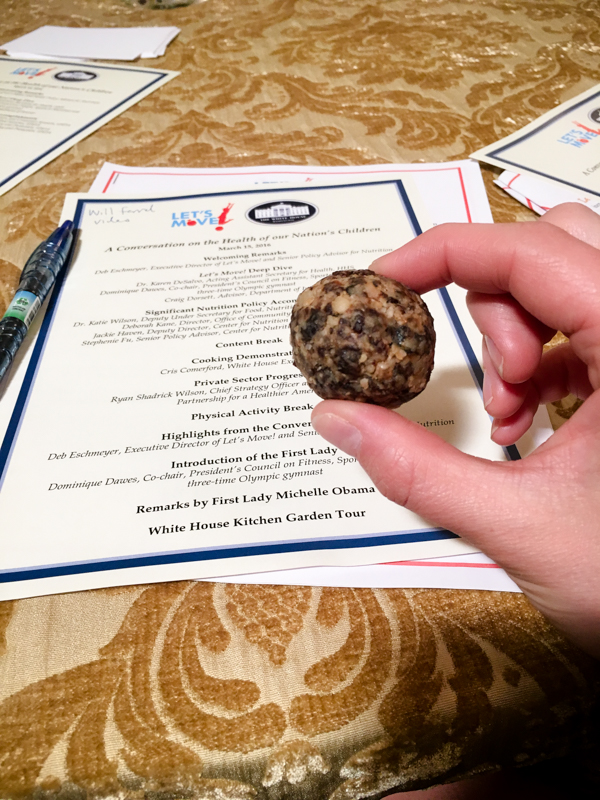 We had a kale salad cooking demo… 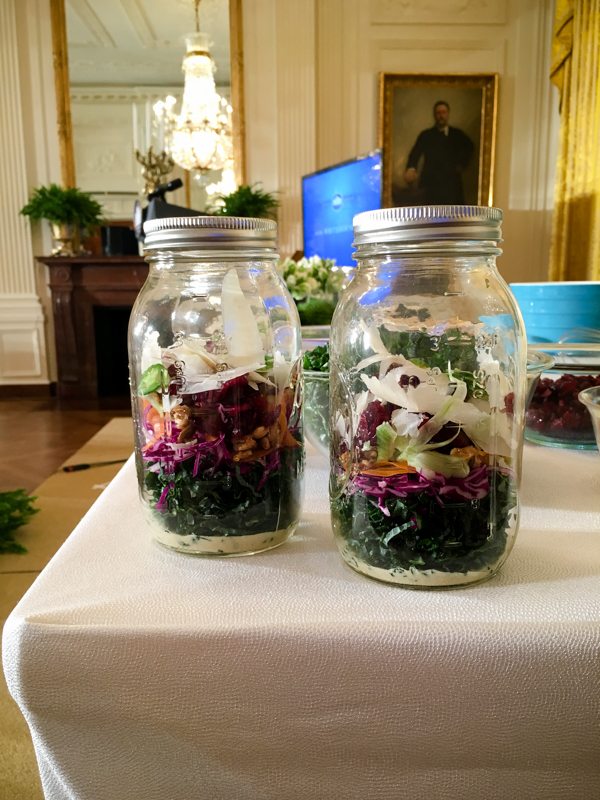 And then finally had remarks from the First Lady!! 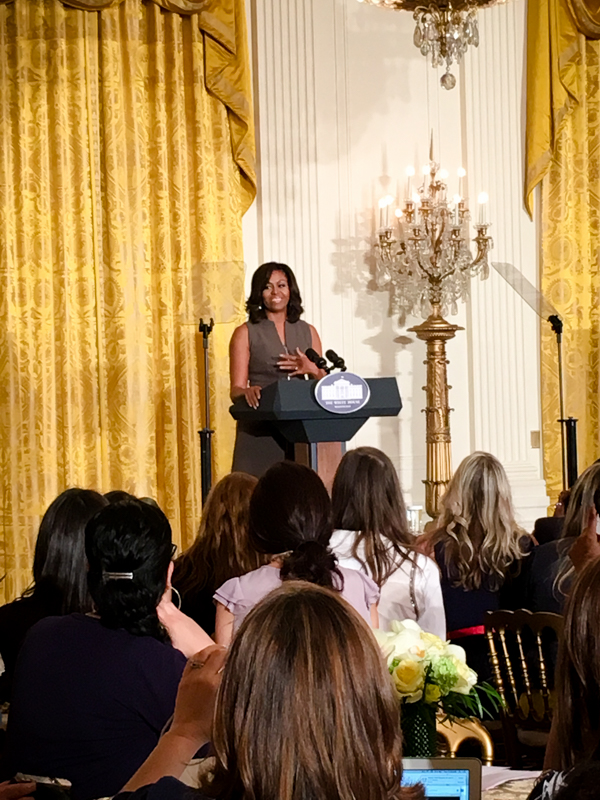 It was so exciting when she walked in.

She is as down to earth as they come, and I loved her attitude about nutrition: if your child said they didn’t like the dentist, you wouldn’t tell them they never had to go again. Or if your child said they hated math, you wouldn’t excuse them from all math classes in the future. Nutrition is super important and should be taken seriously. You are the adult and you have a responsibility to your children to feed them well. I felt a lot more inspired after her speech to work on my own child’s nutrition! 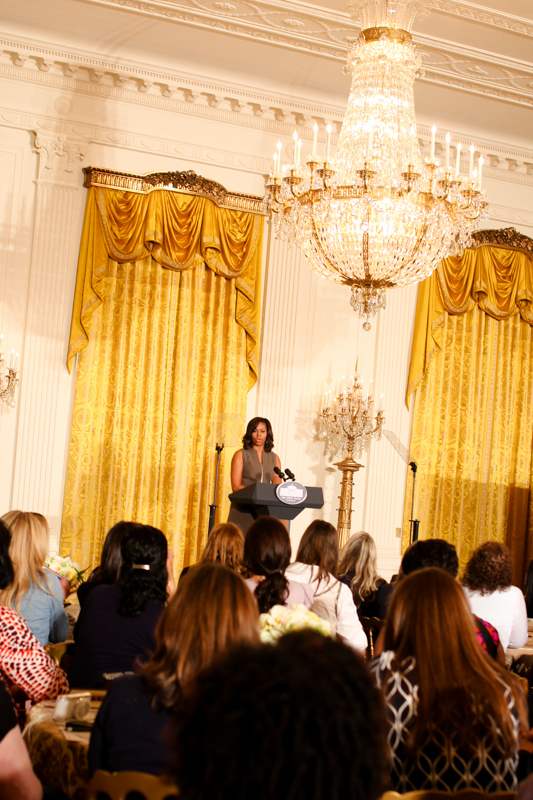 Our final stop of the day was a stroll across the White House lawn to peek at their garden. I was tempted to eat some kale on the spot! 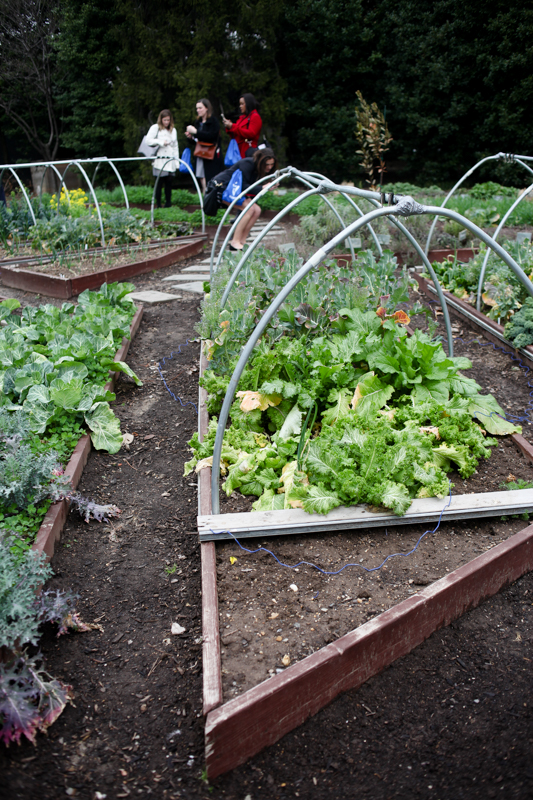 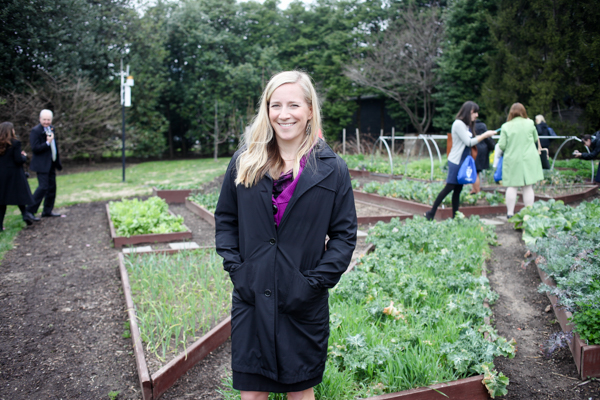 I stayed with Anne at her house Monday night and she made me this delicious pancake made with just eggs, bananas, flax and cinnamon! 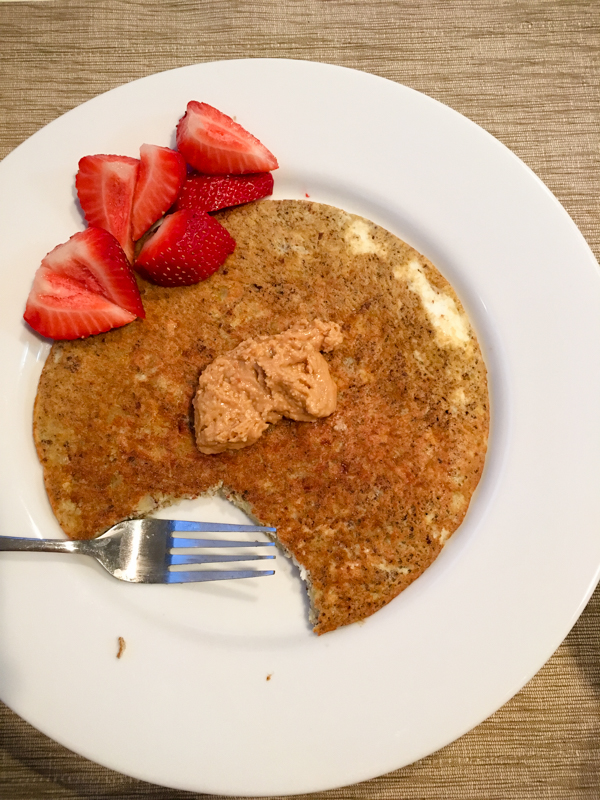 And for lunch after the event we went to Teaism, where I had a yummy salmon bento box and a chai tea! So good! 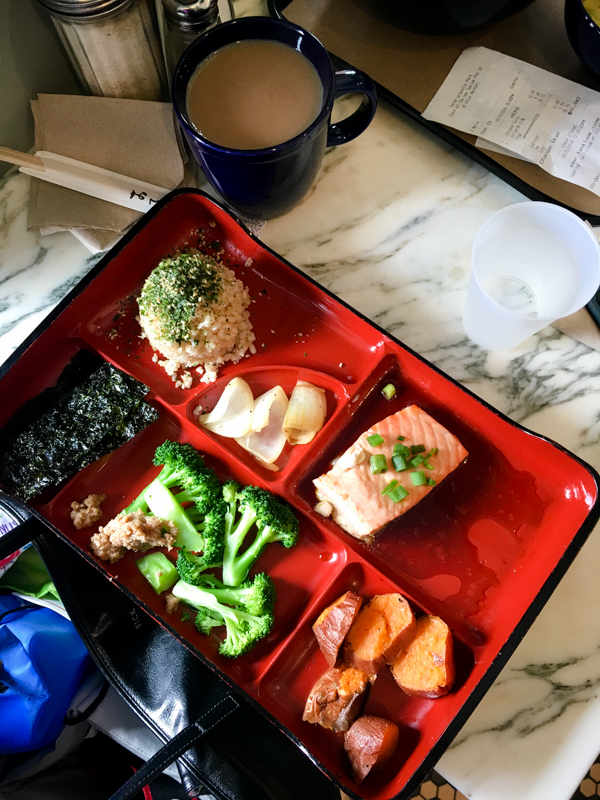 FYI, I am new to Snapchat and snapped a bunch of photos and videos from my day!! Follow me @katheats!!