This Pretty Much Sums Up The Day 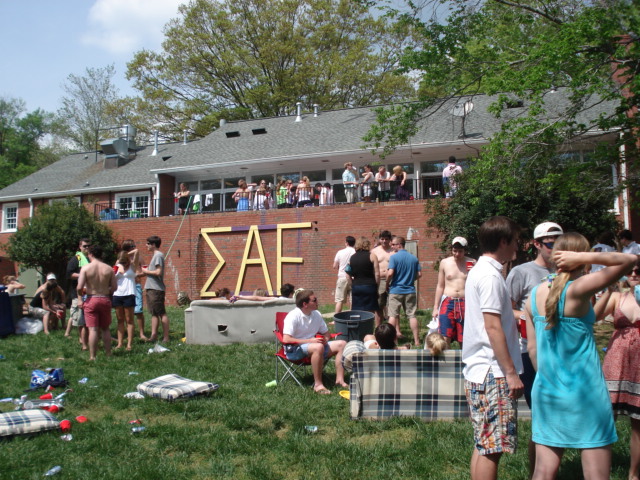 We had a blast today. It was a perfect hot spring day and the friends and frat kept me on my feet for about 7 hours straight. I. am. exhausted!! Not only was it a fun day, but it was a healthy day too! I actually didn’t have anything to drink until dinner despite being surrounded by endless amounts of beer. It was just not that appealing so I never had one (and it didn’t help that it was all from cans – eww! If I’m going to drink water, I’ll just drink water 8) I only like flavorful beer that comes from bottles and taps.)

One Of These Things Does Not Belong

So I had the bright idea of getting a salad from the Harris Teeter salad bar when we stopped to buy the alumni contribution to the beer. The salad bar was great and had lots of fresh veggies and mango!! I also got a 4-pack of Perrier, which was delicious to sip all day. 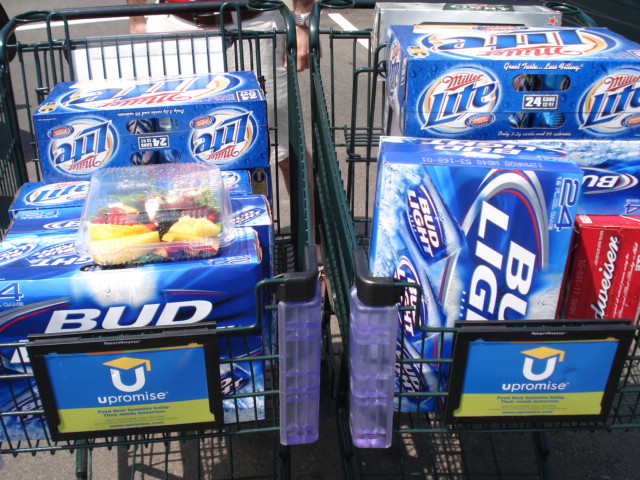 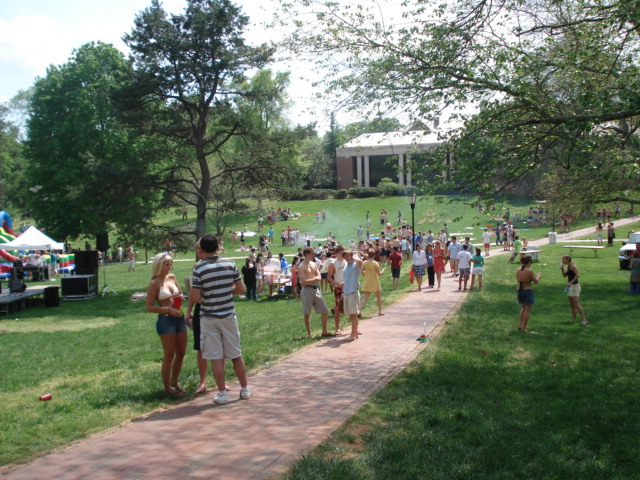 Since I had breakfast at 10:30, I didn’t get hungry for lunch until around 2 p.m. The BBQ and coleslaw at the frat house were not that appealing, so I ventured down to the main event where they were serving free hamburgers, hot dogs and VEGGIE BURGERS!! I had a MorningStar burger on a wheat bun, along with a few pretzels, animal crackers and my salad bar fruit. 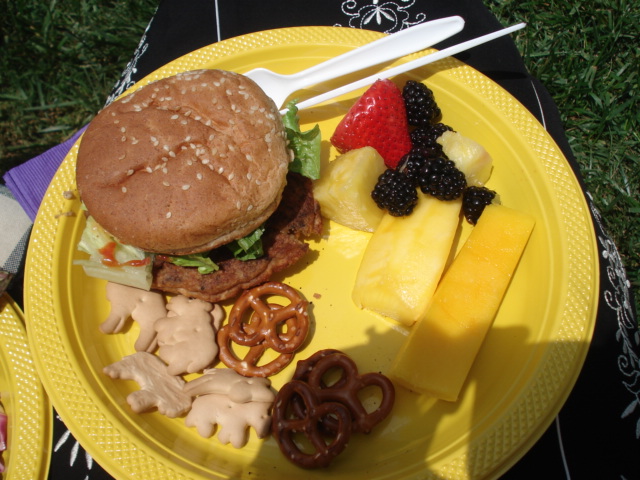 And here’s my big salad, which I mixed with a tsp of Caesar dressing I found in the frat house fridge. 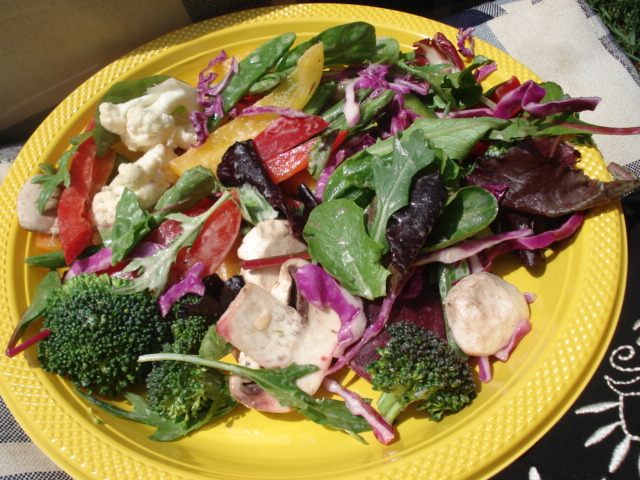 I think I ate more than anyone else there volume-wise (well, except maybe all the beer they were drinking 😉 ) 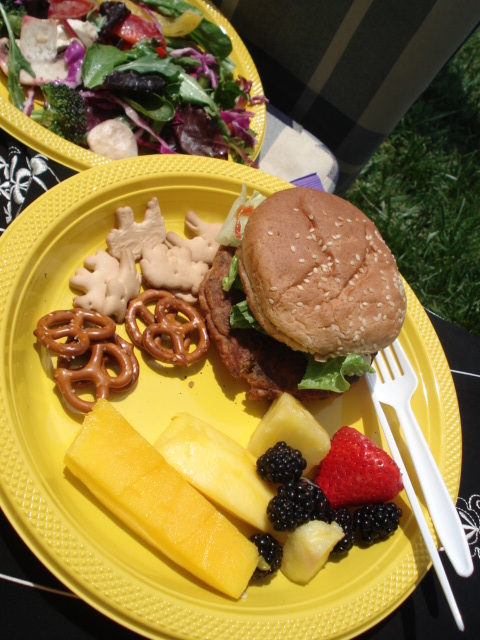 I had a few waters and Perrier’s throughout the day – and a Diet Coke. 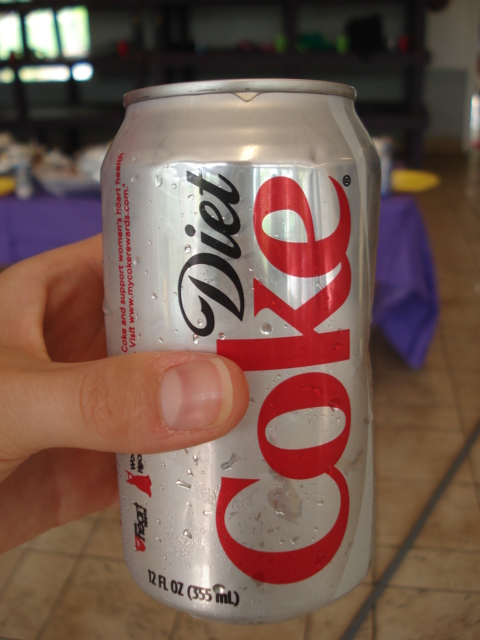 It’s Sigma Alpha Epsilon’s (the husband’s fraternity) 125 anniversary on campus, so here’s the plaque to celebrate that he was in charge of getting – 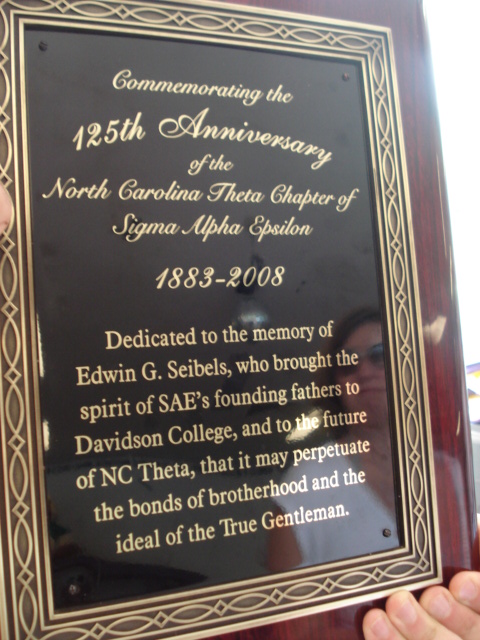 And here he is with his dad, who pledged the same frat at Davidson in the 1970s and came up for the weekend – 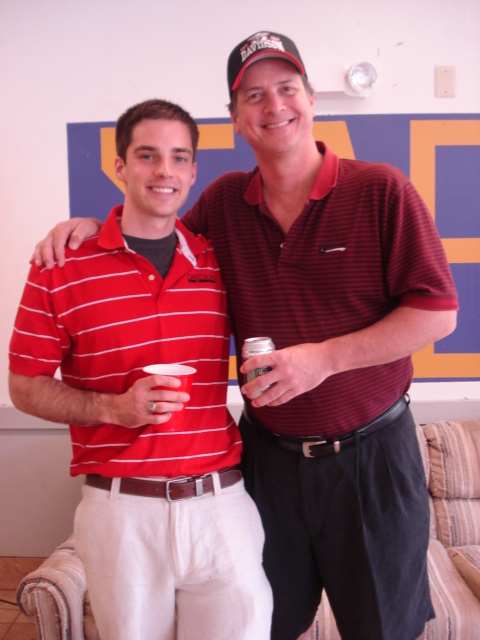 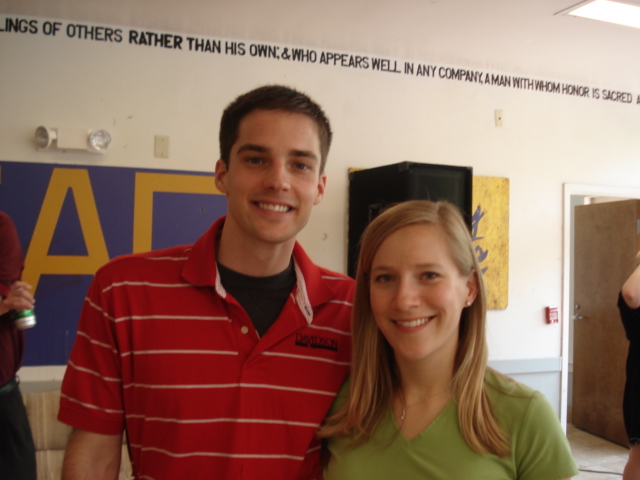 And me with my sister (a senior) and her boyfriend, Matt – 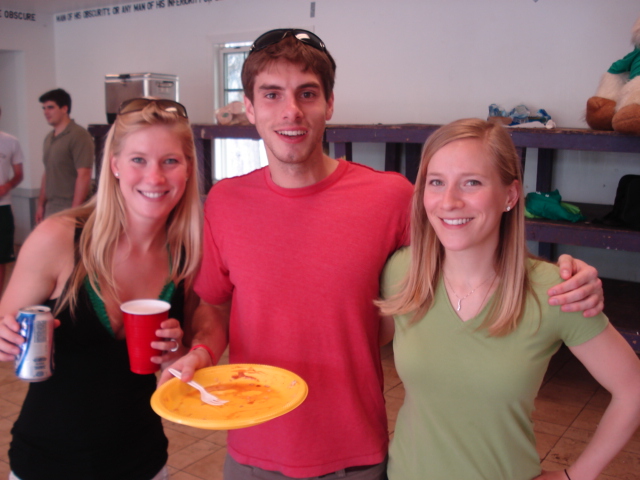 Despite a late lunch, I got hungry for dinner around 6, so we went with our friends to the walking distance bar/restaurant where we always end up, The Brickhouse. They have a mix of bar food and nicer entrees and the BEST PIZZA in the world.

I decided on Blackened Grouper with sides of corn on the cob and grilled zucchini and squash. Both were quite buttery. I ate 1 of the 2 grouper filets, 1 of the corns and all of the Z+S. Plus a big bite of one of the husband’s pizza slices and one of his crusts 🙂 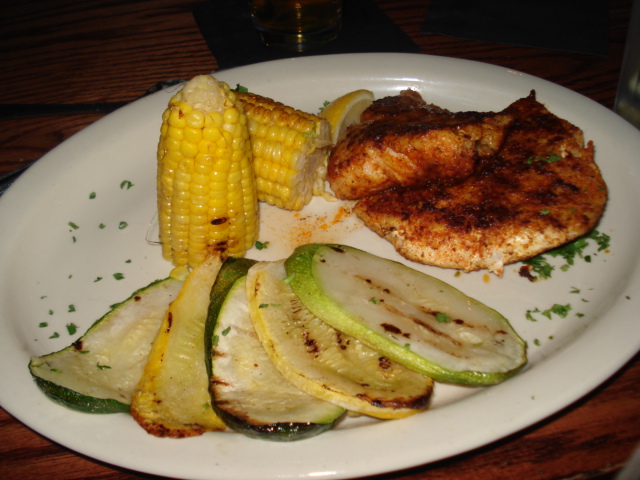 And I had my first drink of the day with dinner – a glass of Pinot Noir. Although it didn’t really taste that good. I don’t know why alcohol was so unappealing today! I think it must have been the heat – it got pretty hot mid-afternoon. Guess I shouldn’t complain though because it was probably better that I didn’t have any more! 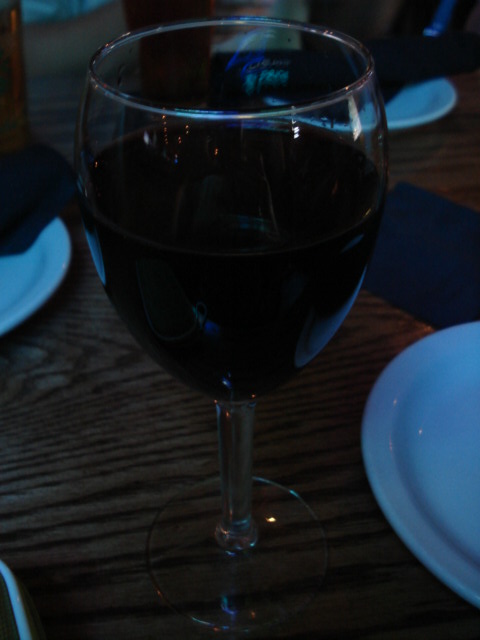 And we close with SAE’s mascot, M’Okay Monkey 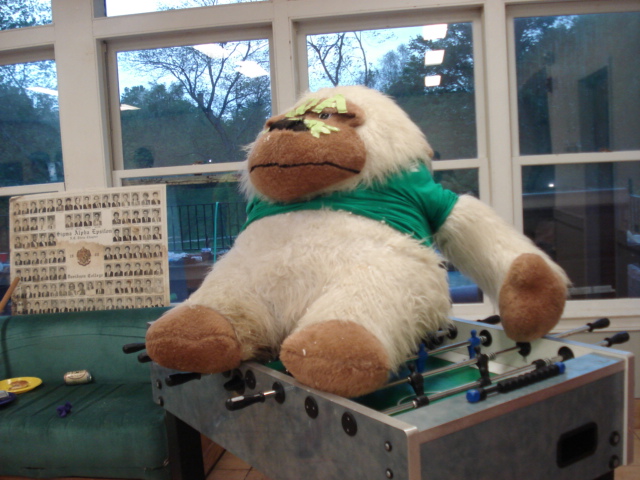 The husband is staying at Davidson with his friends and I headed back home (a 40 minute drive) for the night. It was a loooong day, and the second I push “publish” I am headed upstairs to take a much-needed Epsom Salt bath and crawl into bed. After 5 hours on my feet last night and 7 today, my whole body needs a good rest!