You are here: Home / Lifestyle / Fishin’ For Good Salmon 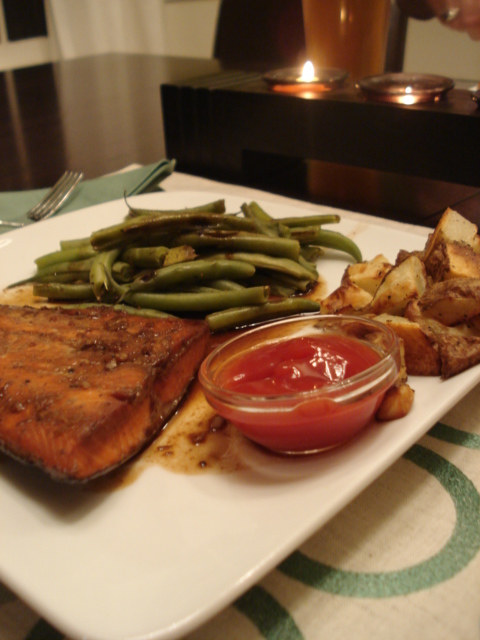 The summer between our freshman and sophomore years at Davidson, the husband and I rented a room together in an apartment near campus while we worked as counselors at a watersports camp. We shared a small kitchen with 2 other roommates – it was our very first time cooking for ourselves. And we had no clue what we were doing! Well, some clue, but compared to now it’s funny to think about some of our favorite “recipes.” But there was one dish that we tried that we thought was just so good. It made a long lost appearance tonight!

Combine everything in a baking pan. Let salmon marinate for at least 30 minutes. Bake at 400* for about 20 minutes, until fork flaky. 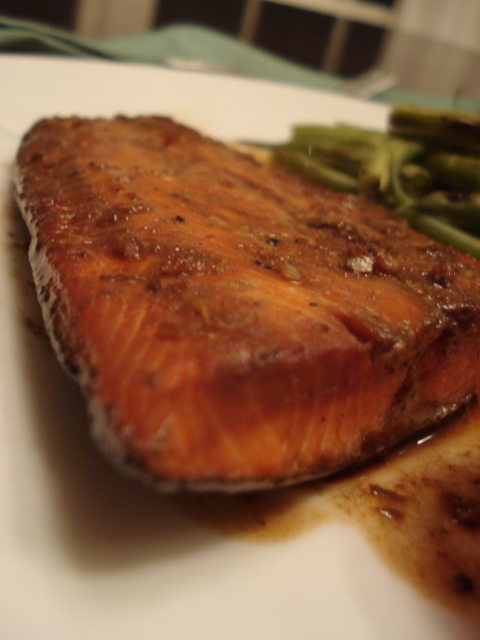 I have to say, we have failed at salmon the past 4-5 times we’ve cooked it. It’s been dry and tough. But knowing that this maple baked recipe never fails to produce a succulent salmon, I have come to the conclusion that it’s the frozen sockeye salmon that I hate. I’m not sure why sockeye always ends up in my cart – I guess I need to do some more research on the types of salmon! But I’m never buying it again. This dinner tasted great and we made sure it was NOT overcooked this time. It wasn’t dry, but it was just as tough as usual. 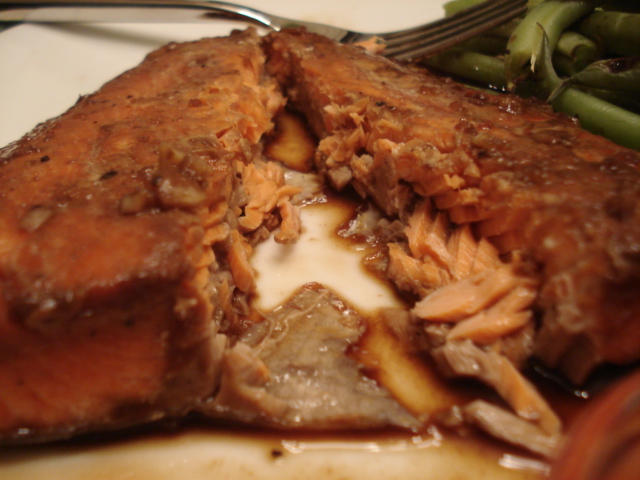 We also roasted some green beans alongside the salmon. They shared the maple-soy sauce. 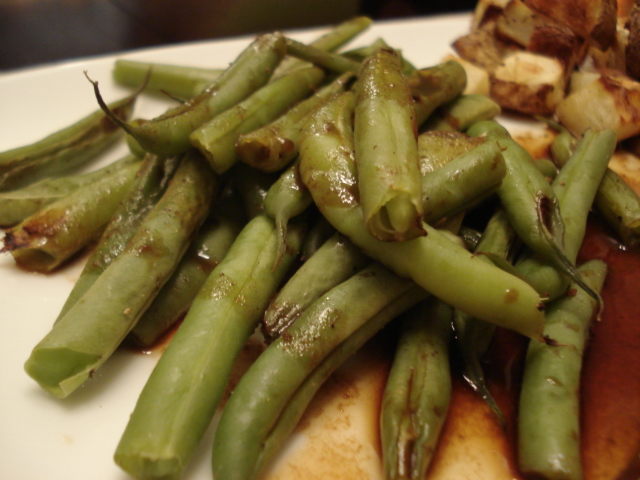 And we also roasted a russet potato. I wish we’d used our sweet potato, as I think it would have gone well with the maple salmon, but we got this had this guy on hand and needed to use him. I had my little dish of ketchup on the side. I used to hate ketchup but now I love it. Guess it’s not the best thing to love because we do buy the kind with HFCS and sodium (I just can’t stand to pay $3 more for organic when I only eat a tbsp of the stuff like twice a month!), but there is lots of lycopene in it! 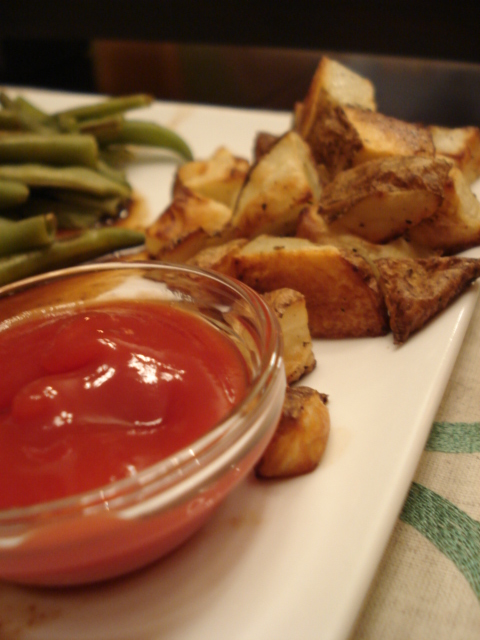 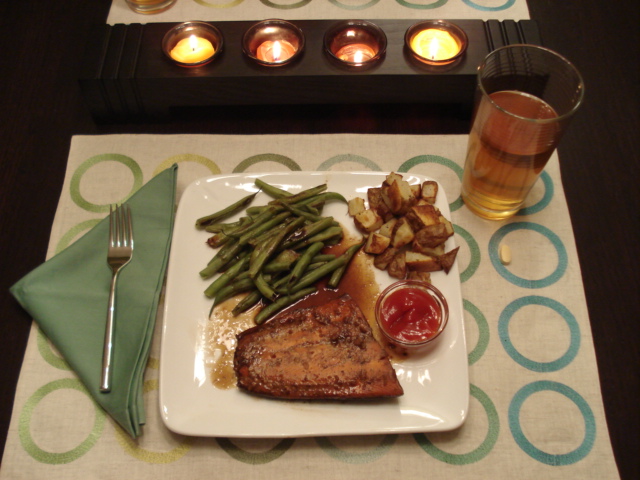 This dinner was 525 kcal, 9 grams fiber, and 32 grams protein. FYI, I am not trying to eat more protein, but find it interesting to note how much having meat and fish contribute. Americans get WAY more protein than we need,  which is why I never really pay attention to it. The recommended amount is 0.8 grams per kg of body weight – about 45 grams for me. Clearly I am getting enough!

My mouth is having one of those “I’m stuffed but I REALLY want to keep chewing nights.” I think because the tough salmon left me mentally unsatisfied with this dinner. I had a small chocolate for dessert and am having a cup of decaf tea as well. I think hot tea really helps satisfy the palate after a meal. 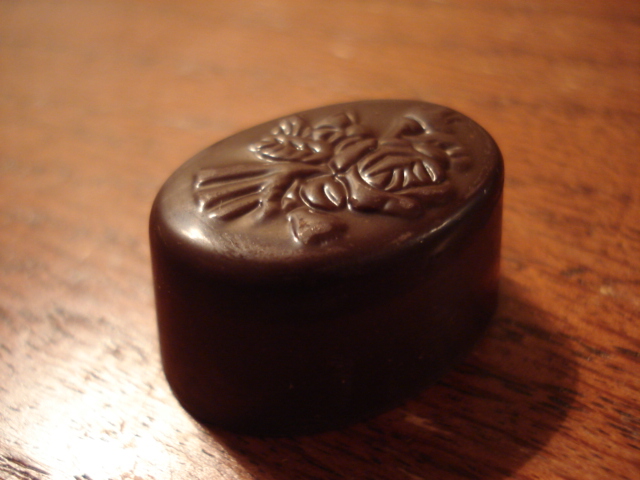 This afternoon I got home around 4:30 and wasn’t terribly hungry. But I knew I wanted a little something and didn’t want to wait too much later or I’d “spoil my appetite.” That lunch was way more filling that it felt at first.

I settled on a serving of Kashi H2H with a few strawberries in hemp milk. It was just the ticket! 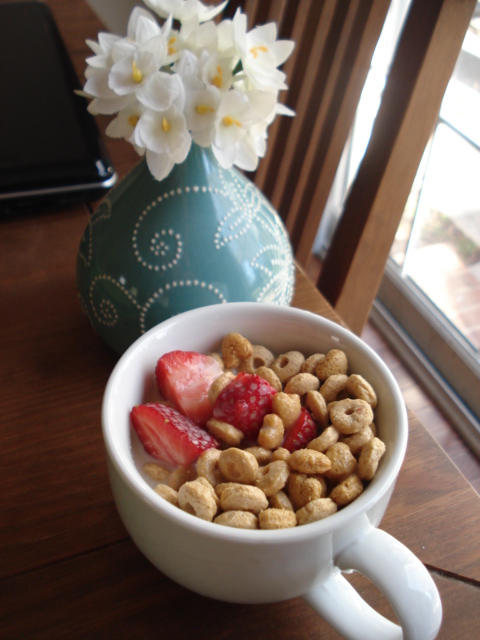 Snack was ~213 kcal, 7 grams fiber and 8 grams protein. Probably more than I really needed because I wasn’t too hungry for dinner! I find that the first hour after a snack I still feel kind of hungry, but I know I shouldn’t be because I just had a dose of fuel and nutrients. But the second hour after a snack, I’m rarely hungry. It’s like it takes my body a while to realize it was fed. Just a personal observation 🙂

Off to do nightly things like take a bath and study.