Matt’s latest hobby is fermenting foods. Now in addition to big vats of beer, we have jars of vegetables lining our basement shelves. Here’s a bit more about what he’s been up to.

There’s something I can’t explain about my love of fermentation.  When I get into casual conversations about baking and brewing I usually talk about the blend of art and science.  We meticulously and precisely measure ingredients according to recipes that read like formulas, but then you give it to the yeast and something wild happens.  It’s in their hands now and while you can guide the process of fermentation, in a way I feel out of control.

When I ferment things, I feel like I’m tapping into ancient history.  It’s one of the oldest food preparation methods we have because fermentation happens almost without our intervention.  The world is covered in bacteria and the very organisms we need for fermentation happen to be attracted to the foods we’re trying to ferment!  Grains are covered in the bacteria we utilize to make sourdough, grapes’ fauna turn juice into wine, and vegetables have their brothers in pickling readily available! 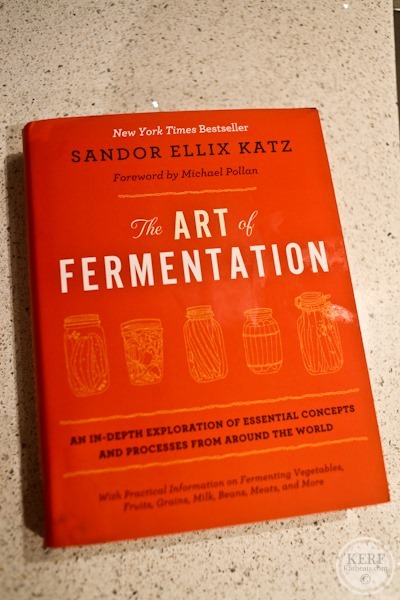 I heard about Sandor Katz’s book Art of Fermentation when he was interviewed by The Brewing Network (where I pretty much get all of my homebrewing info).  What especially attracted me was the way Katz talked about the coevolution of humans with the bacteria around us.  We think of ourselves as individual units but there are hundreds of species of bacteria living inside us, each of them contributing different enzymes, or making our food more digestible, or outcompeting pathogenic organisms that invade our body.  He even suggests that the sterility of modern packaged food may have decreased our intestinal flora so much that this could potentially be the source of the huge wave of food allergies.

I decided for my first fermented vegetable experiment I would make some green beans.  To start I had to get a fermentation vessel ready.  I bought a half gallon mason jar, an airlock, and a rubber grommet. 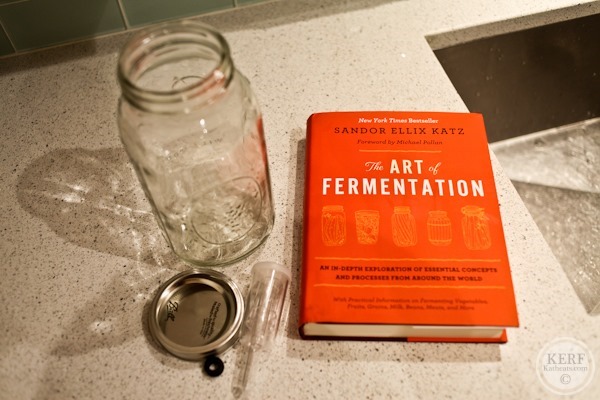 I drilled a half-inch hole in the lid, pushed the grommet in, and voila! 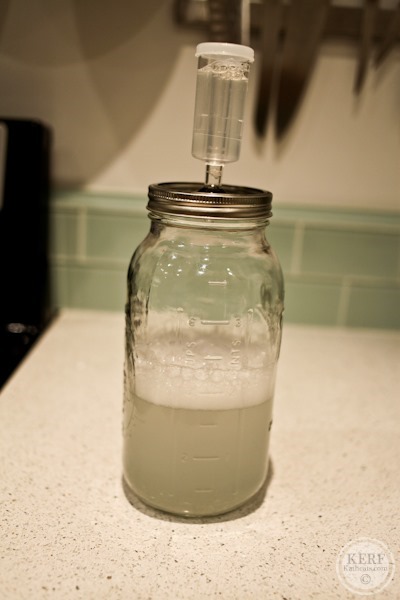 Then I put some sanitizer in, and sanitized all my other equipment.

I bought 1.5 pounds of organic beans, pinched off the tips, and rinsed them in a colander. 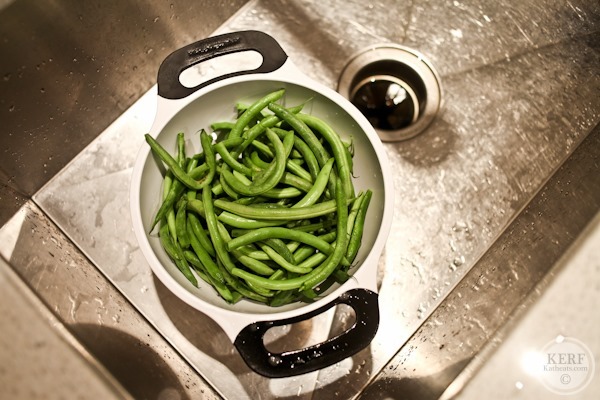 Next I prepared a brine solution for fermentation, which was 5% salt by weight.  Since I knew the beans would take up some of the volume in the jar, I prepared 1600ml of brine (so that would be 80 grams of salt and 1600 grams/ml of water). 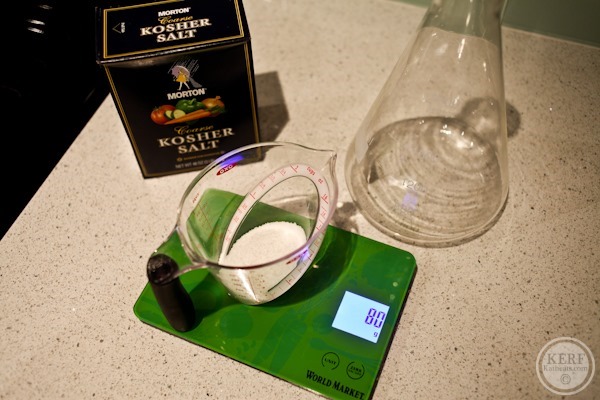 For some extra flavor I sliced three small garlic cloves and put in 5 grams of hops! 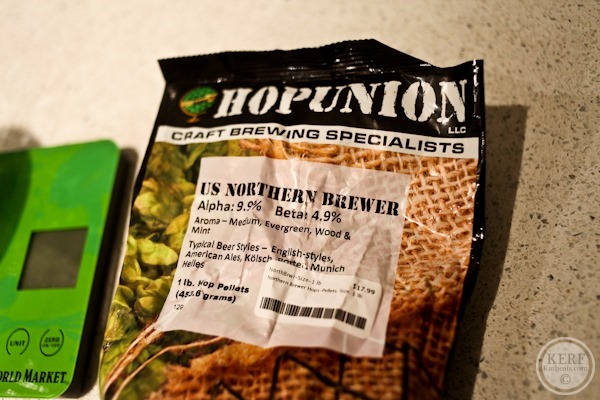 I started stuffing the green beans into the jar on its side, hoping that this would make them lay flatter and allow me to pack it tightly.  Unfortunately because of all the curly beans this didn’t really help that much. 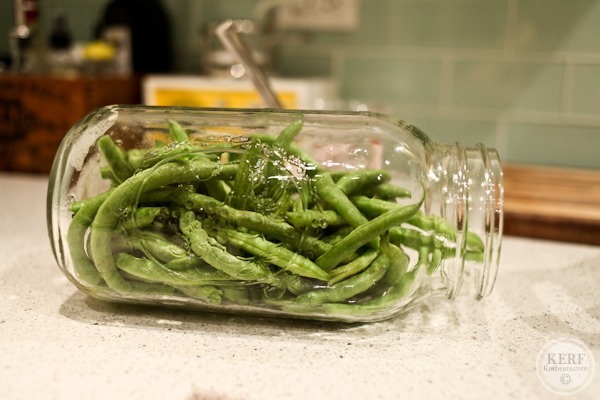 I continued packing as tightly as possible up to the shoulder and then poured the brine solution in. 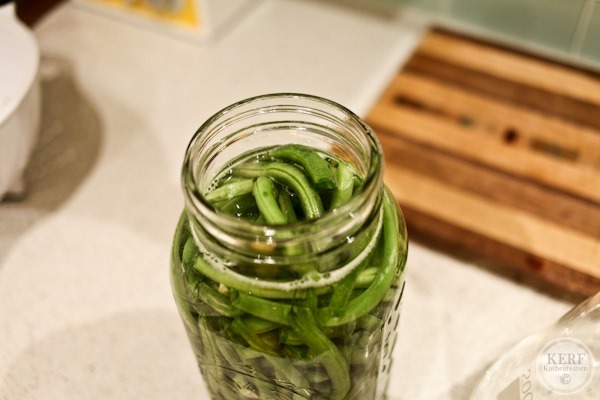 Then I poured just a small amount of brine into a plastic baggy and placed this on top – the idea is to completely submerge the veggies under the liquid. 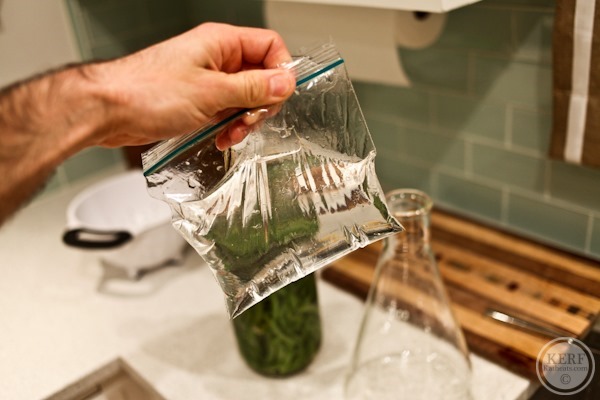 What we’re doing here is creating an oxygen-free environment that will allow the fermentative bacteria to grow and transform our food while excluding harmful organisms.  Under the liquid, lactic acid bacteria will consume and transform the food, produce acid and other flavor compounds, and outcompete other organisms.  Katz cites numerous times that there are zero documented cases of food poisoning resulting from fermented vegetables, so don’t be scared!  Compare this to how many spinach recalls you’ve heard in the past few years. 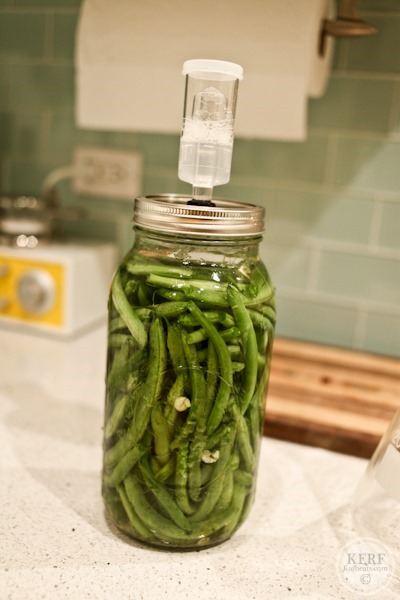 I let the beans ferment at room temperature for a week, and then moved them to several smaller jars.  It was a great first experiment.  I think I could have let the fermentation go a bit longer – the beans certainly got a little less crunchy, took on some of the salt and hop flavor, and too much garlic!  I wonder if more time would balance all these things out.

I’m pretty excited to ferment more stuff – the procedure couldn’t be simpler and there are so many things you can make.  Next up is pickles and ginger!  Pick up the book if you’ve been thinking about getting into ferments – I feel like I’ve discovered an unexplored culinary world, and have further attached myself to an ancient art! 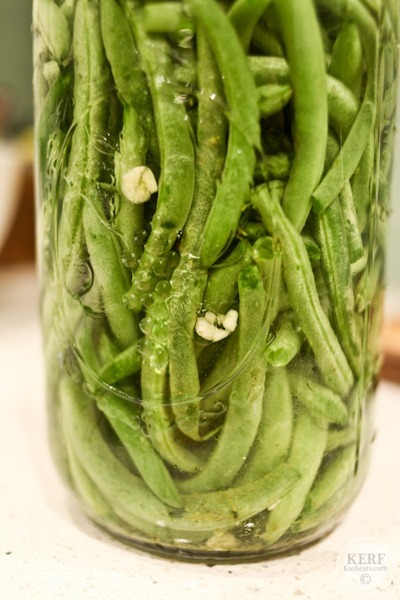