You are here: Home / Lifestyle / February 4

Yum! While I prefer thick root vegetable soups in the winter, it was nice to have a light dish that reminded me of summertime! Well, I guess it is going to be 70* here tomorrow – summer is on the way!!

I forgot to take a photo of the parchment packets because there’s a video on the way!! So you’ll see them soon enough. The packets had layers of:

Assemble into a packet. Seal with staples (!!). Bake for 15-20 minutes, depending on fish thickness. Serves 2. Each serving is about 180 kcal.

I topped mine with avocado! 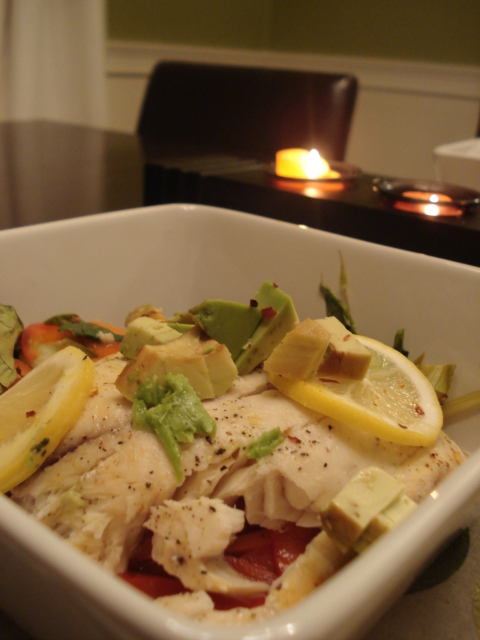 For a heartier meal you could serve these over rice or with crusty bread. We were lazy and not very hungry, so it was just fish and veggies tonight. 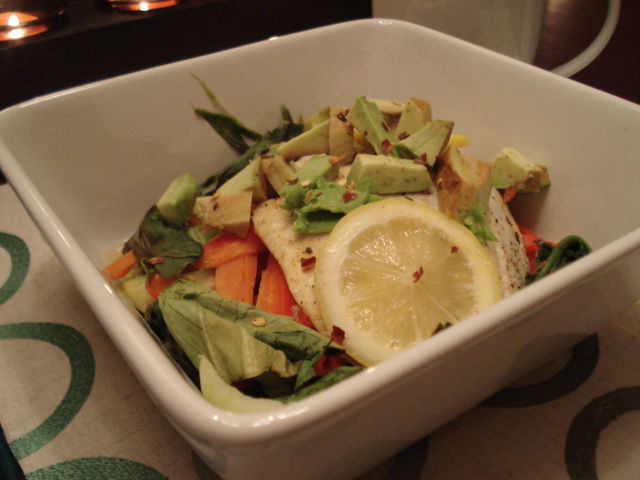 From above, with hot tea – 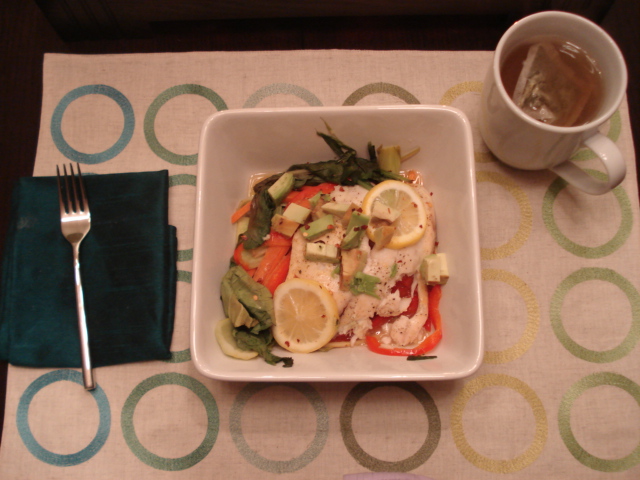 The husband made his best bread yet!! A hearty nut bread with oats, walnuts and flax! He says it’s “Kath’s Breakfast Bread” because he’s got a plan to turn it into French toast. I can’t wait! This afternoon I had a slice with Smart Balance and jam – 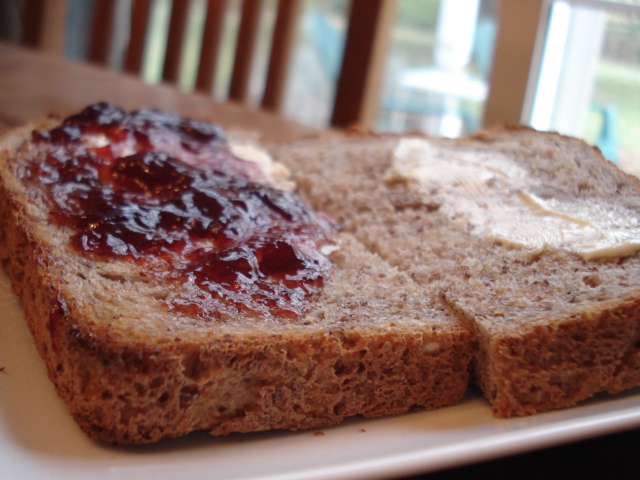 1) Posting. I thought it over after today’s experiment and I think I’m going to stick with a post per meal. I agree that the longer posts are very overwhelming to sort through the comments and it’s actually a little harder on me to have to edit rather than just post fresh. I also think having a fresh place to post comments with each meal keeps things flowing along. (I’m SO sorry Fig!)

2) Calorie Counts. It seems the overwhelming majority of you like seeing the calorie estimate per meal, and I’m glad to know that it has been beneficial to the majority. Some of you noted that you are often surprised by what 500 calories of healthy food looks like, and if it contributes to realizing the benefit of eating real food, then I should keep posting information for that reason alone.

I eat first and foremost based on hunger. If I have calories “left” in my daily goal at the end of the day and I’m stuffed, I don’t eat them (actually tonight is the perfect example). Similarly, if I’m truely hungry, I eat. Simple as that.

After hunger I eat to balance food groups. My goal is to get protein, fat and whole grains at every meal. Even better to get something from each of the food groups. Of course I don’t always accomplish this, but I am always thinking about food groups and make many of my food choices based on what I’ve already had and what I’m short on.

Finally, the calories per meal are usually a result of the above and are pretty consistent day to day. I don’t plan my meals based on their calorie count, rather I plan them based on hunger and balance and what I think will keep me full and have learned what calorie amounts that usually equals. I use my food journal mostly to ensure that while eating nutrient-dense foods that I am getting enough fuel for my lifestyle. Never as a restriction.

(FYI, I will not post any heart rate monitor information, as that was pretty individual and probably not helpful to many anyways.)

Hope this is all helpful…

I always wait until 12:30-1 to eat in the in dining hall so the starving college kids clear out. Surprisingly, my oatmeal pancake held me over just as well as oatmeal. Must be those egg white proteins. I got some quality work done while I waited today. Then I enjoyed a REALLY good vegetable-heavy lunch 🙂 I LOVE vegetables and I’m so full! My mouth wanted a little dessert, but I really don’t think I could have fit any. The only bad thing is that I couldn’t get wireless to work in there, which means I can’t blog right after I eat and have to relocate 👿

Tomato Stuffed with Brown Rice, Bread Crumbs and Kidney Beans (they have the nutr. info online, so this was supposed to be about 150 kcal). 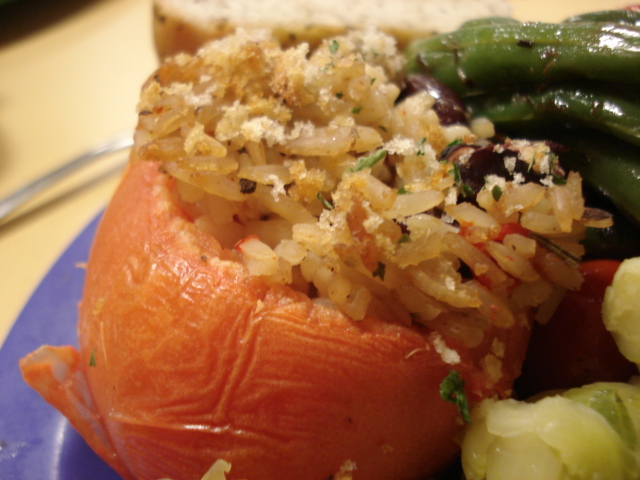 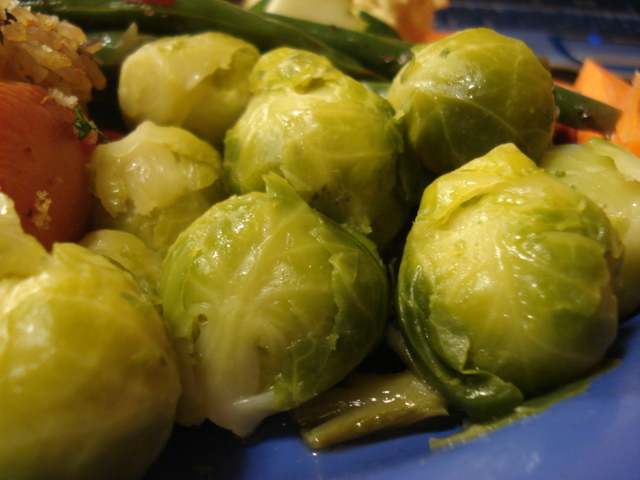 Carrots and 2 tbsp hummus from the sandwich bar for a little protein. This was actually really good hummus (and I’m picky about my hummus!) 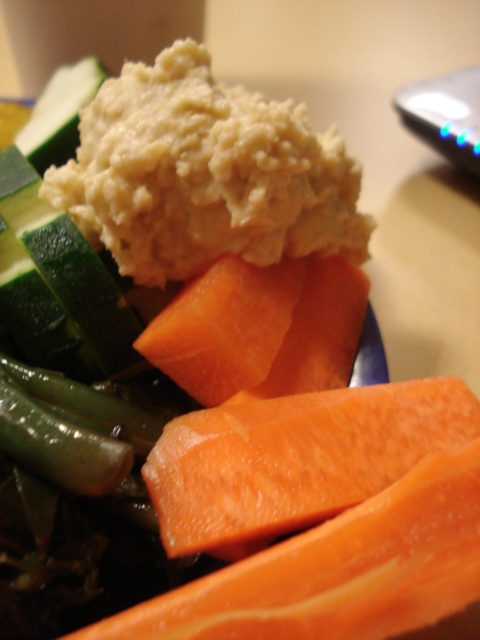 A nice glass of skim milk for some protein/dairy. It went perfectly with the salty veggies – 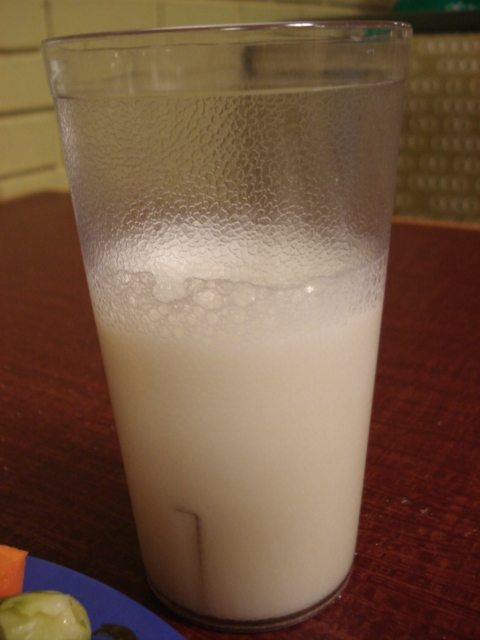 And more – the sprouts were on top of about 1/3 cup collard greens and topped with a few green beans. On the far side I had some pattypan squash and sauteed tomatoes, peppers and zucchini from the grill. All the veggies were on the buttery/oily side, but not too bad. I was in the mood for cooked vs. a raw veggie salad today and boy were they delicious and filling. Plus a small piece of focaccia bread (which was rather dry but good flavor), about 1/2 an oz worth. 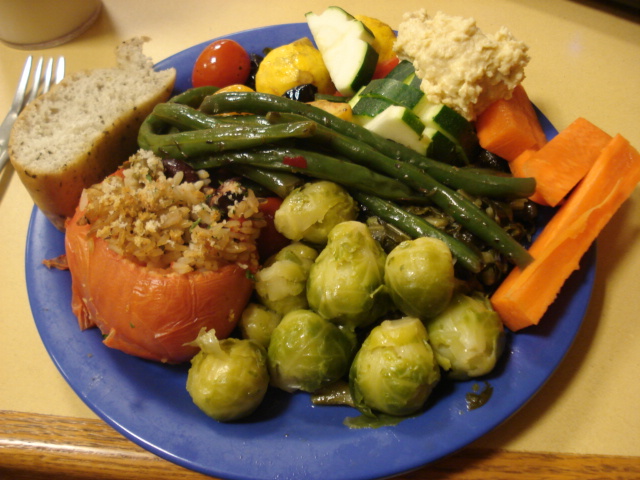 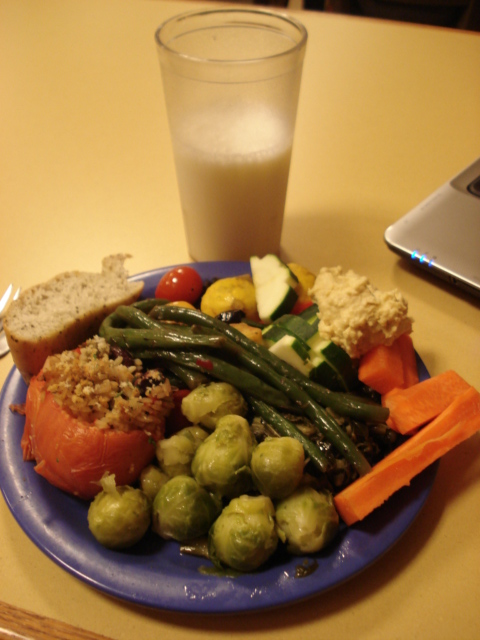 Running to lab now – see you for dinner!

After a clear majority for the “edit the breakfast post” method, I’m going to give it a try. Hopefully this will help keep the comments more readable and at the end of the day all meals will be together. I’m planning to put lunch on top of breakfast so the newest is always at the top. Thanks for the feedback! I’m always open to making changes that make the blog more user-friendly. (And I promise to get to the FAQs section soon!)

Breakfast: The Best and Worst

We got to bed late last night so I slept until 6 instead of 5. Unfortunately, I didn’t get any studying done 🙁 But I did get caught up on some things and am ready to start the day! My muscles are thankful for a nice day off.

I decided to have an oatmeal pancake today – and it was probably the best I’ve ever had!! I topped it with ground flax, which I haven’t done before, and a drizzle of real maple syrup, and the two mixed together to create this heavenly paste. Walnuts, mashed banana and a tsp of almond butter were also involved 🙂 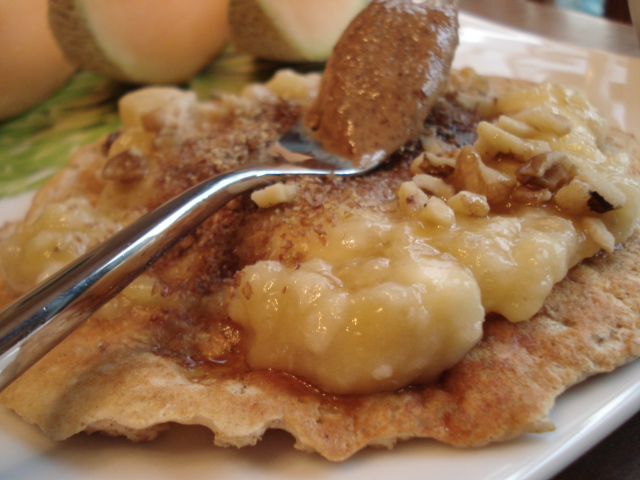 I always used to use the quick oats for oatmeal pancakes because they absorb the egg whites quicker, but we are out of quick oats and so I used old fashioned rolled oats, which we buy in bulk now. I think they work just the same as long as you let them soak for a few minutes. Preparing the oats/egg whites the night before would be a good solution. Today I let mine sit for about an hour while I showered and cleaned up the house.

I also had some cantaloupe slices – and this was possibly the worst cantaloupe I’ve ever had!! Blech. I shouldn’t have even finished them (Victoria Moran would have said not to eat food that didn’t taste good), but we didn’t have any other fruit in the house (besides banana) so it was either this or nothing. (Grocery store trip is in store today!). Unfortunately we have tons of this melon left. Maybe the husband will eat it since his sense of taste isn’t as strong as mine…. 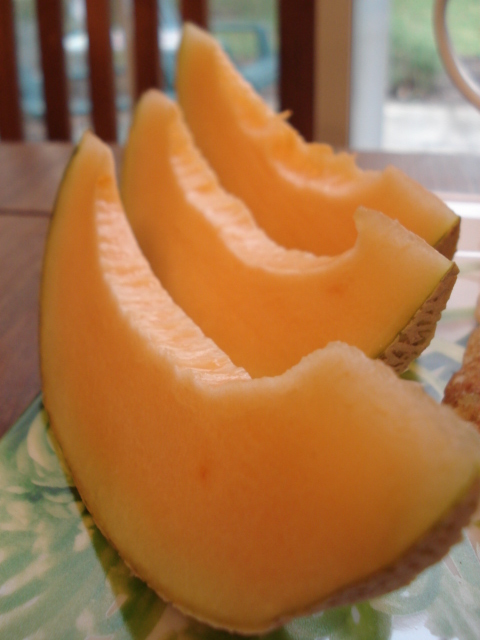 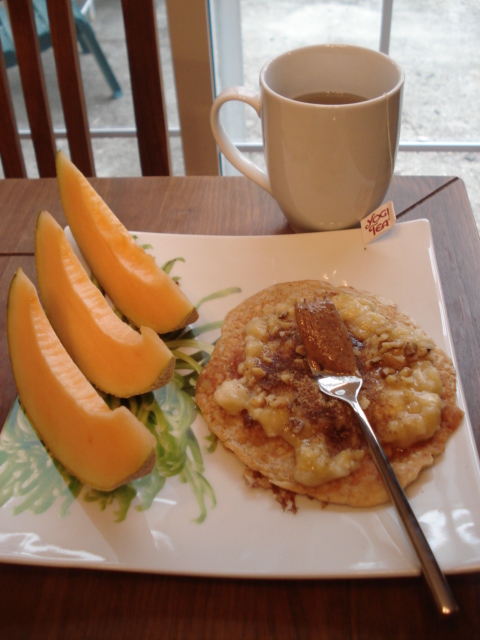 I’m going to leave the calorie counts for my regular meals off of the blog for now. I think they were sending the wrong message that I was weighing and analyzing every bite I eat, and that’s not true. I will definitely include calorie information for our recipes since they are often food combos that we create that readers might be unfamiliar with. Hope this is OK. If you have a specific question about something I eat, then please ask!

Off to class and lab! Lunch should be up around 1:30 today, as I’m taking my laptop with me to campus. I’m eating in the Winthrop dining hall again (I didn’t have time to make a lunch last night) so I’m excited about the all-you-can-eat vegetable buffet!