You are here: Home / Lifestyle / Day 2: Flight To Africa

Not sure if this post will go up, but if you’re reading this it did!

Wow, nothing is more humbling than stepping onto the soil of a new continent. Going about daily life, you think things around you are so important, but it all gets put into perspective when you realize you’re just one human being in a species of billions all trying to survive. Chilling!

My flight left at 10am and it’s now midnight here and I’m late for bed! I can’t believe two days of my life are just gone! But despite all the sitting, they have been fun (mostly because of the fun meals 😉 ) One of the other Lipton journalists – Kelly, a food writer for TreeHugger.com – happened to be seated across the aisle! We got to chat a lot, which was fun.

I also managed to sleep for 2 solid hours on the second flight.

I felt so much better after my nap.

But before I could nap, I had to eat again! I feel like this trip has just been meal after meal, but the meals have all been between 4 and 6 hours apart, so I have been somewhat hungry and ready to eat. Just not as ready as I would have been if I’d eaten less at the previous meal

this !
The meals also come at the beginning and the end of the flights, so that makes the spacing odd too.

As our “lunch” appetizer, we had more of those yummy (chilled) mixed nuts. I had a tiny 1 oz pour of white wine and a sparking water while I watched The Office in the sky!!!! 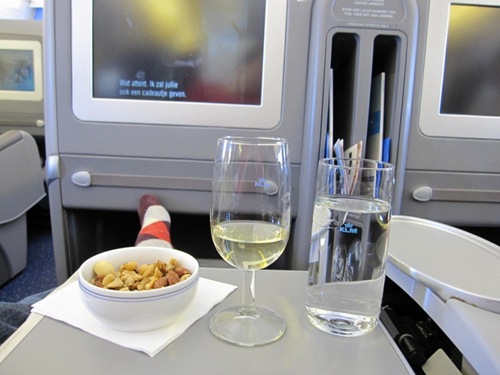 I guess my breakfast was the muesli meal I had at 5am, so this lunch came around 11:30. 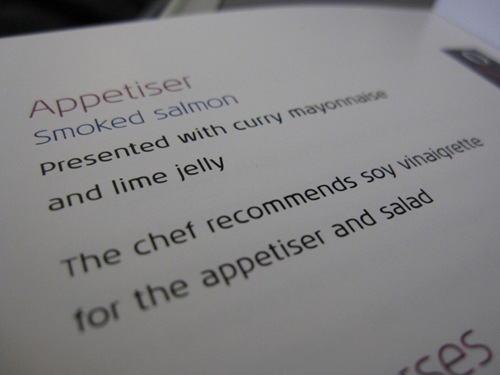 First was a smoked salmon plate (yay!) with some mixed greens and a seedy roll. 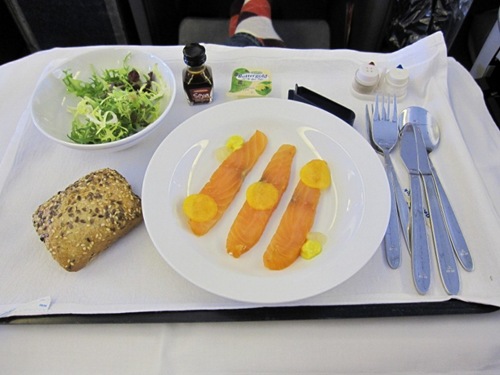 The salmon was excellent, but the best pat was the tiny dots of lime jelly + curry mayo!! Such a unique and delicious combo. I ate all but one of the salmons and the whole roll + salad. I love first courses and tasting plates! 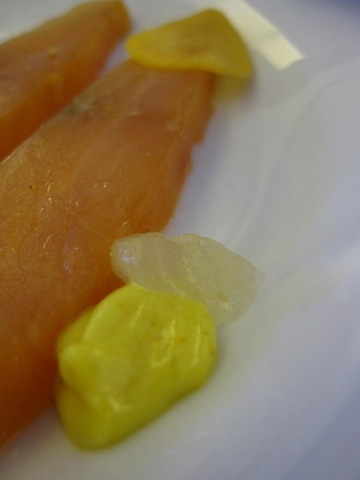 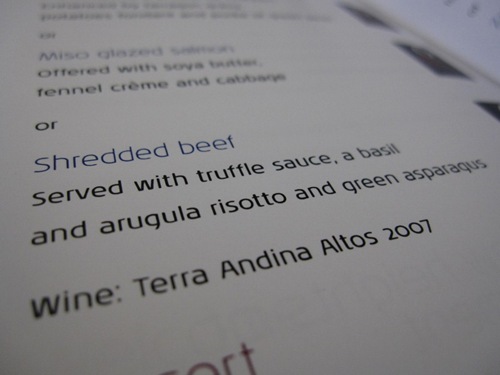 I didn’t eat much of this entree. A few bites of beef and risotto and all the asparagus. It wasn’t the best on the trip.. 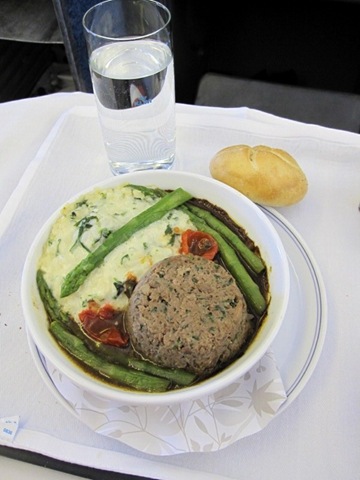 And I traded my roll for another flax-covered one! 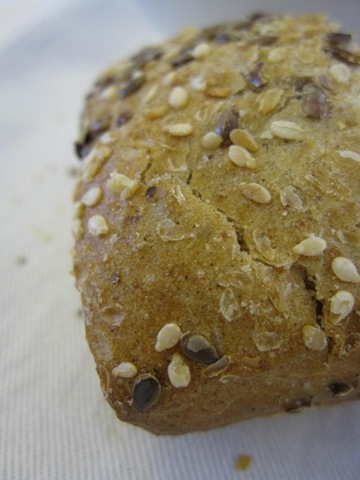 For “dessert” I turned down the Caramel Chocolate Cake (which everyone said was amazing) for a cheese platter. I was just in the mood for cheese and since I didn’t eat much of my entree, I wanted something more substantial. OMG – the goat cheese was sooo good! I ate it like a piece of pie! The one in the back was cumin flavored, which I didn’t care for (I only like cumin in Mexican and Indian meals). The blue cheese was pretty good too. 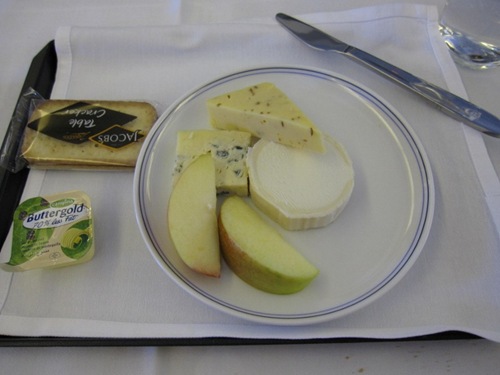 Good thing I turned down the cake because they passed out chocolates after lunch! I couldn’t resist a Dutch dark chocolate 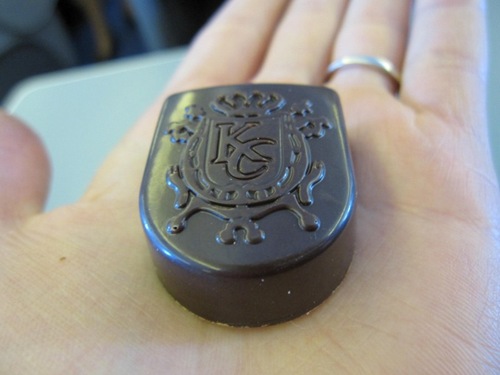 Near the end of the flight we were served a “Warm Snack,” which turned out to bed the best meal yet!!!! 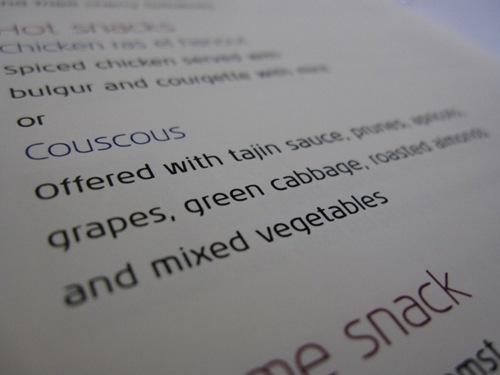 This couscous was awesome – dried fruit, beans, almonds! I ate it all (sans the 2 round onions!). 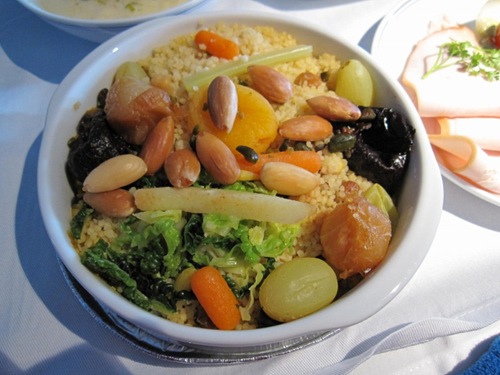 And then another fun thing – a big fig and two dates!! 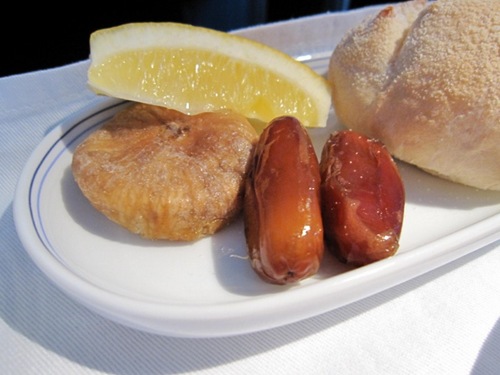 And the most fun of all – a rice pudding topped with pineapple and pistachios and almonds. I had no idea what this was and took a taste and broke into a smile when I realized it was a desserty thing 🙂 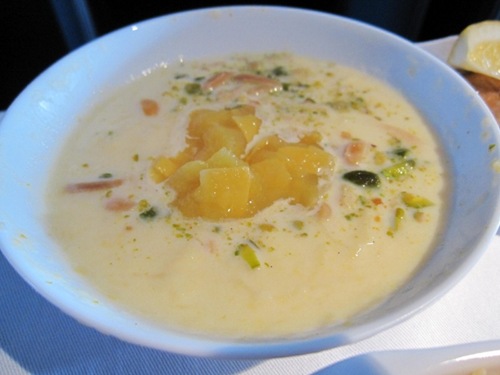 Laslty we had Smoked Chicken with Avocado Cream and Fried Cherry Tomatoes. I just had some of that and some of the roll and all of the left-hand stuff. 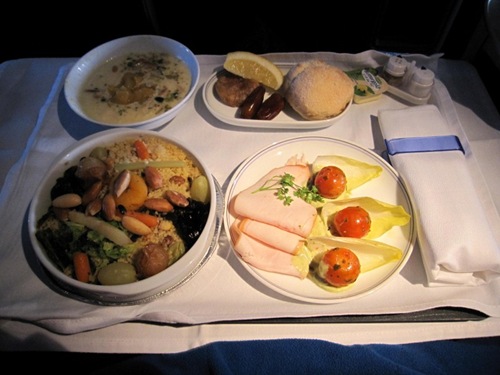 We landed at 8:15 Africa time. After a long visa line we met our driver who took us to the hotel. He said you can see giraffe’s in the wildlife park near the airport that we passed! Too bad it was dark.

The hotel is nice and comfortable. 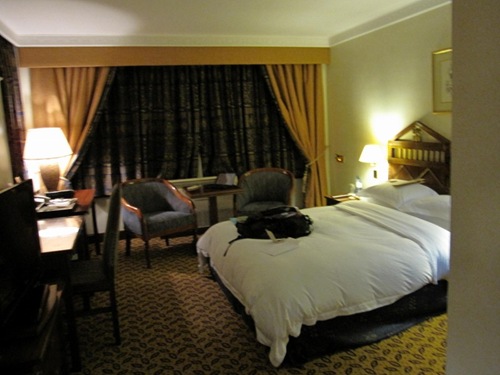 I was delivered MORE wine upon arriving!! I took a few sips to say I did but I’m wined out. 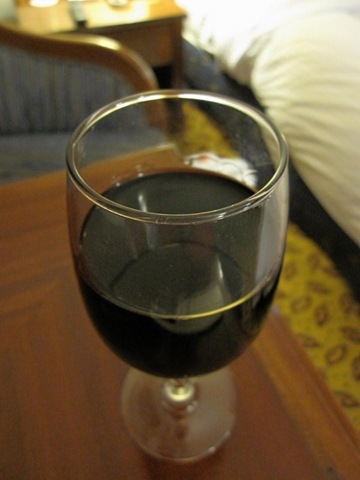 And finally, here’s me after nearly 30 hours straight of travel and no sleep! 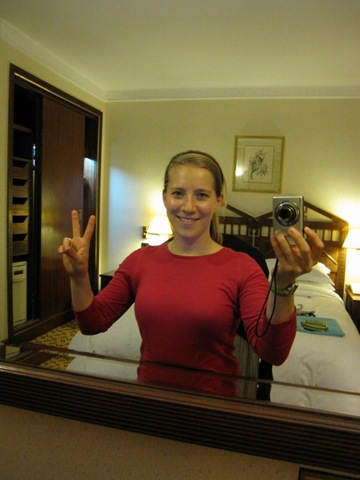 I just took a nice hot shower and am glad I got the internet working – I was able to chat with my mom, which made me feel better 🙂 I’m slathered in bug repellant just having gotten clean again.

Kelly and I are meeting for breakfast around 9. I think we’re going to stay around the hotel tomorrow because our other group members are arriving throughout the day.