As I mentioned somewhere in the comments, I’m going to be developing some recipes for a cookbook during my month off!! I was contacted by a publisher to do about 26 recipes, and of course was thrilled to participate. While I do hope to write my own cookbook someday, I’m so excited to get started on this project – and to have a "part time job" for my month off that doesn’t require commuting 2 hours a day!

I’ll need to keep the recipes’ ingredients and techniques a secret. I will be posting photos and titles to show what I eat generally, but unfortunately I won’t be able to post recipes for some of the things I create (and eat!) Tonight’s soup, for example. AND……I’m pretty sure the cookbook isn’t being released until 2010. So if you can just wait a few years then you can go buy it and my recipes will be in there!

Cool As A Cuc

I went for a 45-minute walk this afternoon for some light exercise and to return our video to the grocery store. It felt great to get moving and I think I’ll be up for my normal workouts tomorrow morning. I don’t have Sports Nutr. tomorrow so we’re planning to go to the gym in the AM. Note to Self: DO NOT walk outside in jeans in July even if it’s a cloudy day!

Coming back steamy from my walk, I wanted to try a new Chilled Cucumber Soup recipe. There are a few secret ingredients here, but it’s mostly cucumber and yogurt – 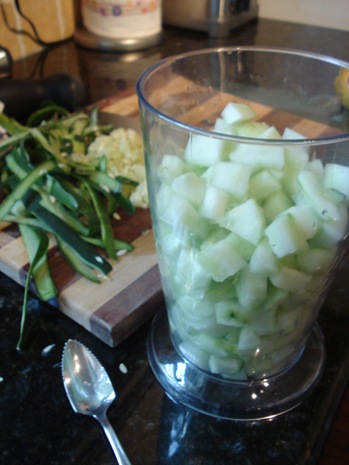 My picnic version. It tasted great to begin with, but like most chilled soups, I think my portion was too large. You have to sip them no more than a cup at a time or it gets to be too much! 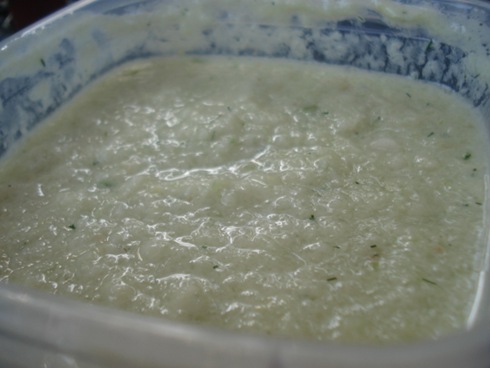 I also had a bagel sandwich with turkey, Laughing Cow, mustard and basil – 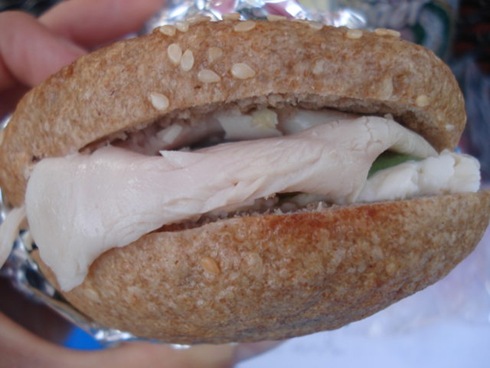 And packed some red peppers but didn’t eat them (too much soup). Along with a ginger ale – 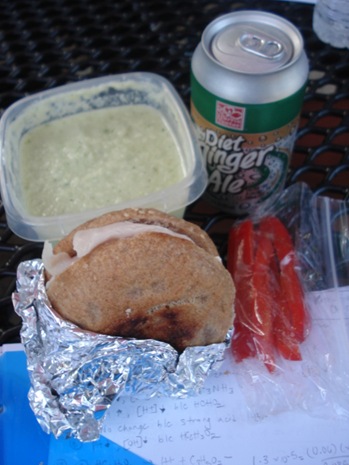 Tonight was my second-to-last chem class!!! While the class officially ends next Tuesday, I’m not going to tomorrow’s lab or Wednesday’s lecture and will be taking a lab test on Thursday in the testing center in the afternoon (all for complicated "you can miss this many classes" reasons and because I’m not taking the last test for "you can drop your lowest test grade" reasons). Sweeeet. My goal with this class was to just get through it and I’m almost there! It’s actually gotten a whole lot better. The prof lightened up a LOT and we kind of (*KIND OF*) like him now 🙂

My stomach still feels funny – like there’s a gas ball in it or something!! All day I can tell I’m hungry, but I don’t get the normal hunger pangs. On my way home from chem, I could tell I really needed a snack and couldn’t decide between cold cereal (my favorite late-night snack besides ice cream) and a molasses cookie. So I had half cereal and a cookie. I took a bite first – I couldn’t wait! 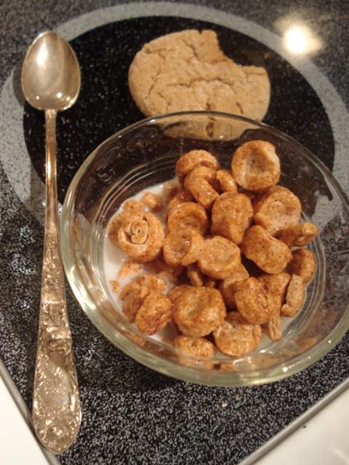 The expiration date on the cookies says June 4….they’re not moldy or anything, just a little stale. Should I toss ’em??