You are here: Home / Lifestyle / Brunch!!

But we’ll start with the early morning 🙂

I got up at 6:30 and worked on Chemistry lab ( 👿 ) for an hour or so. I was hoping to get twice as much done but this stupid pre-lab assignment took way too long. Ugh. Around 7:30 I had a small breakfast before heading to my mother in law’s condo for a nice workout at 8:45.
Half a serving of bulgur with 1/4 cup vanilla hemp milk, 1 small banana, a spoonful of flax and some almond butter. Just enough to get me through my workout and off to brunch. Little did I know how LONG this would take! 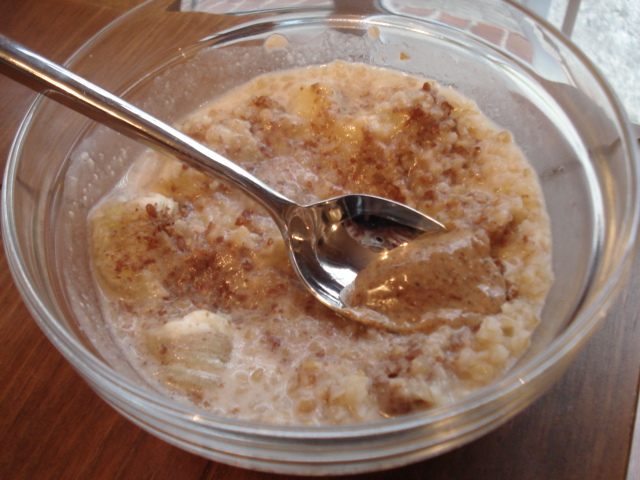 Breakfast was about 230 kcal, 7 grams fiber, and 6 grams protein.

Although we don’t normally run 2 days in a row, the husband and I did a quick 2.6 miles around his mom’s neighborhood before heading into the gym, which is quite nice. We then did about 20 minutes on the ET and 2 circuits on the weight machines. I’ve got my mother in law doing the weight circuit a few times a week and got her set up with weight amounts and reps. She’s doing well!

So I should have known to bring a little something to eat after my workout while we showered and got dressed because this place was a little far and is known to have a wait. But nope, I didn’t think ahead. There was an HOUR wait, but we decided to walk to Target to kill some time and ended up being seated around 12:15. Almost 5 hours and a workout later, my stomach was VERY hungry! Food never tasted so good! I planned what I was going to get in advance (I do this a lot or I’d take an hour to decide when others are waiting on me!) and I had a little bit of everything. It was a lot of food, but I knew this place would be “worth it.”

(That’s a drop of egg on it as I passed my second egg to the husband’s plate!) 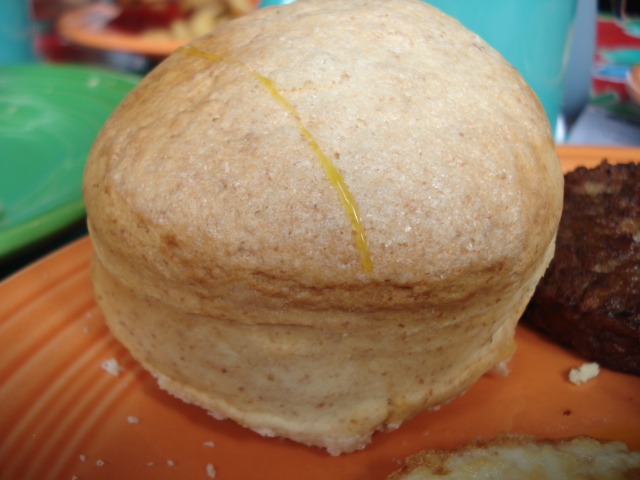 We were accidentally served regular fluffy white biscuits (which are heavenly as well!) and got to bring them home. I’m not sure when or how then will be consumed. Hmmm.

An egg (Two here – I gave the other to the husband) 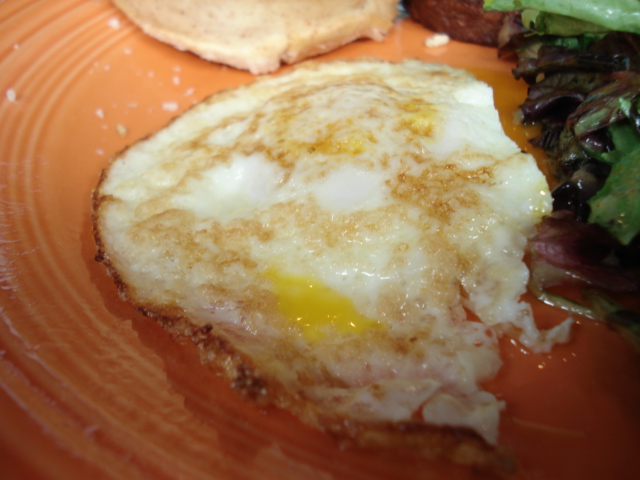 An oatmeal pancake! These are made with flour so they’re not as grainy as mine but they’re still delicious! It was served with a peach compote, which I got on the side. I ended up having some of the compote, but I mostly ate the pancake plain. 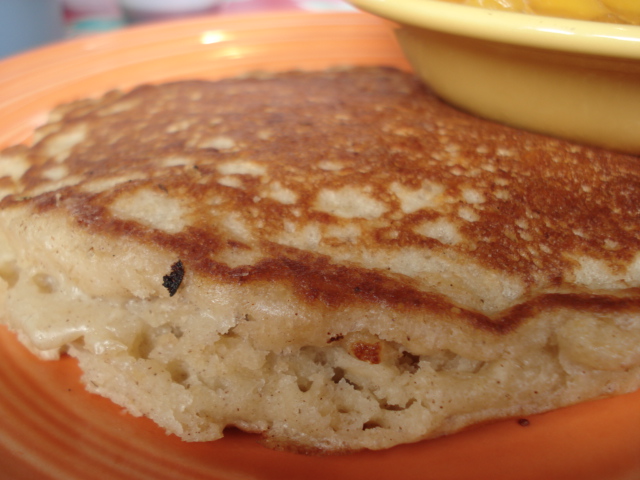 A MorningStar “Soysage”patty, which I really liked but would never buy or have at home because I don’t prefer meat for breakfast. 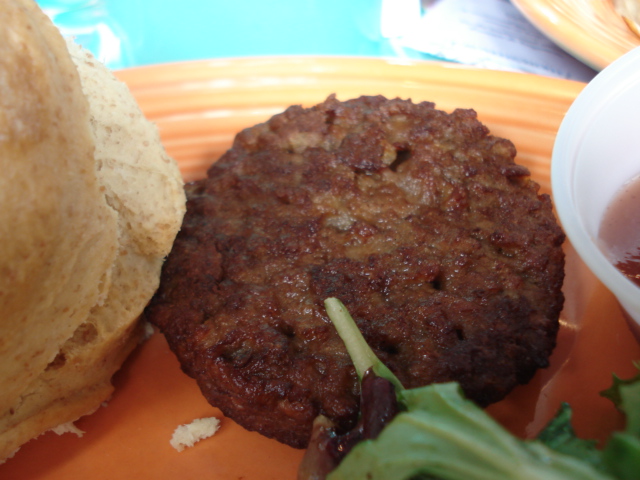 Hot tea. I had 3 cups with some sweetener. 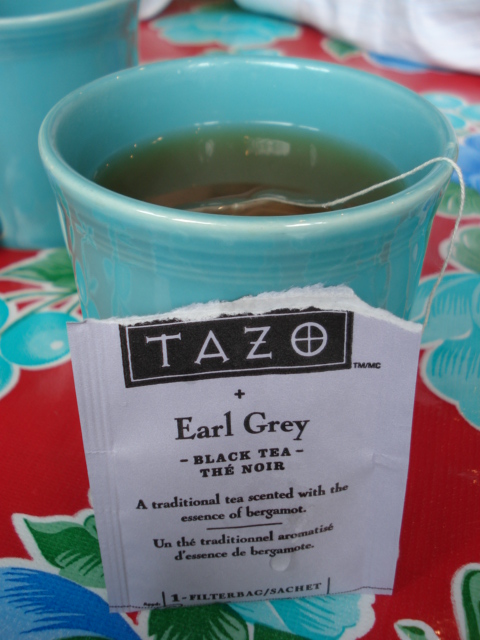 All together (it’s probably easier to see it all at once here!) It also came with a side salad with a drizzle of balsamic. I ate about 1/2 of the greens. So to recap, I ate the whole biscuit, patty, pancake and egg. Plus a tiny bit of the peaches, compote and some salad. It doesn’t seem like as much food from above! 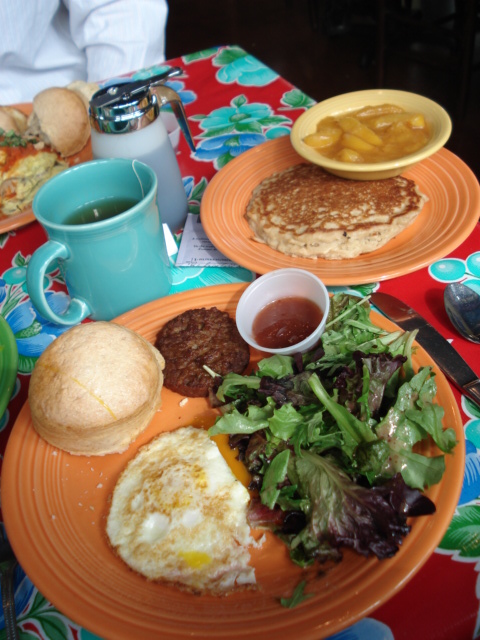 Of course it’s impossible to accurately estimate calories at a restaurant, but I wanted to share my estimate with you all so you can see how I ballpark things like this. Please note that knowing this estimate did NOT detract from my enjoyment of the meal at all!! Every bite was delicious 🙂

Soysage Patty – 80 (I know these are MorningStar from the menu)

But you know, after ALL that food, I barely feel full!! I think I waited too long to eat and my hunger is taking a long time to go away.

Here’s the husband’s goat cheese, mushroom, and basil omelet with a fresh tomato sauce and rosemary “moon fries”! In case you’re curious for a male’s consumption perspective, he also had 3 soysage patties, a biscuit, my egg, and 3 cups of coffee with cream. 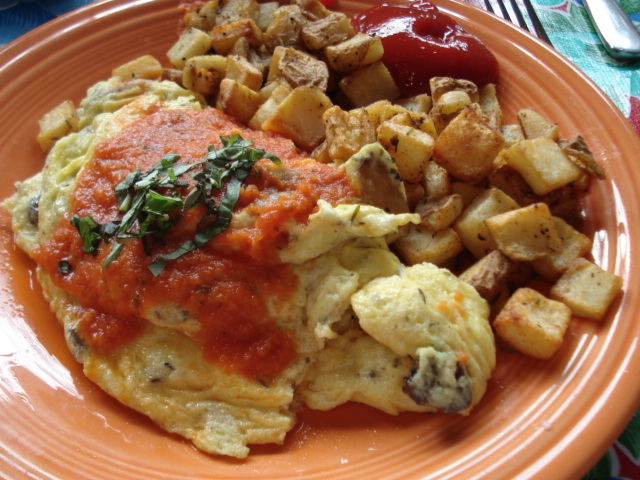