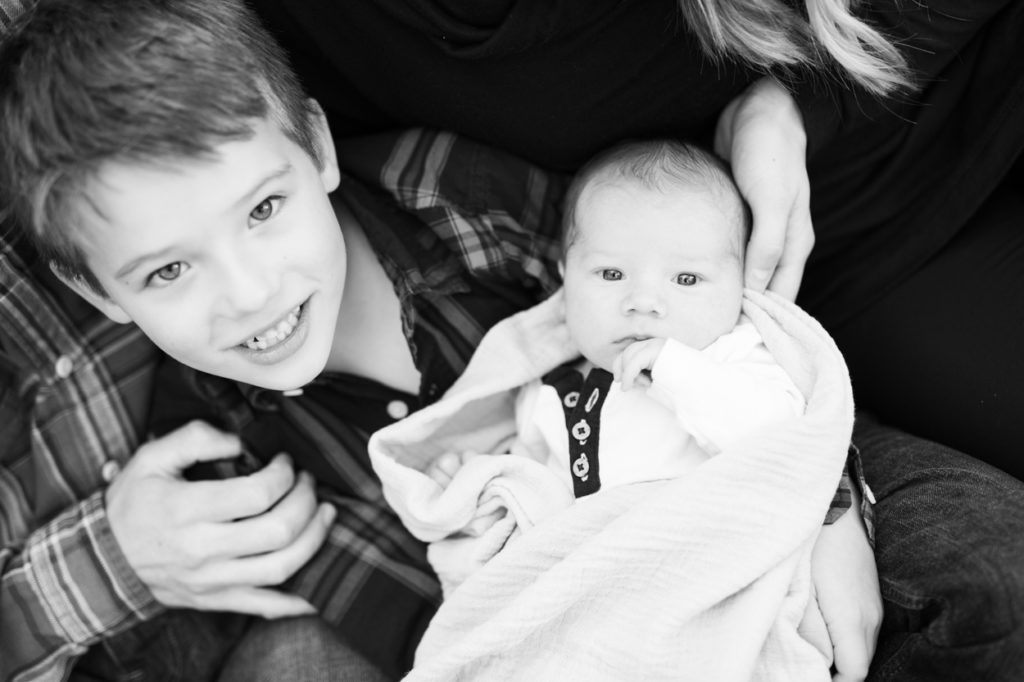 I wanted to check in and share how being a mom of two is going and how the brothers are bonding.

Mazen is very sweet to Birch. He runs through the house with his friends and stops to pat Birch’s head or give him a kiss. Day by day, he is getting more affectionate and now asks to hold Birch (briefly!) We still call him Brother a lot of the time – a habit from when he was on the inside that has been tough to break! 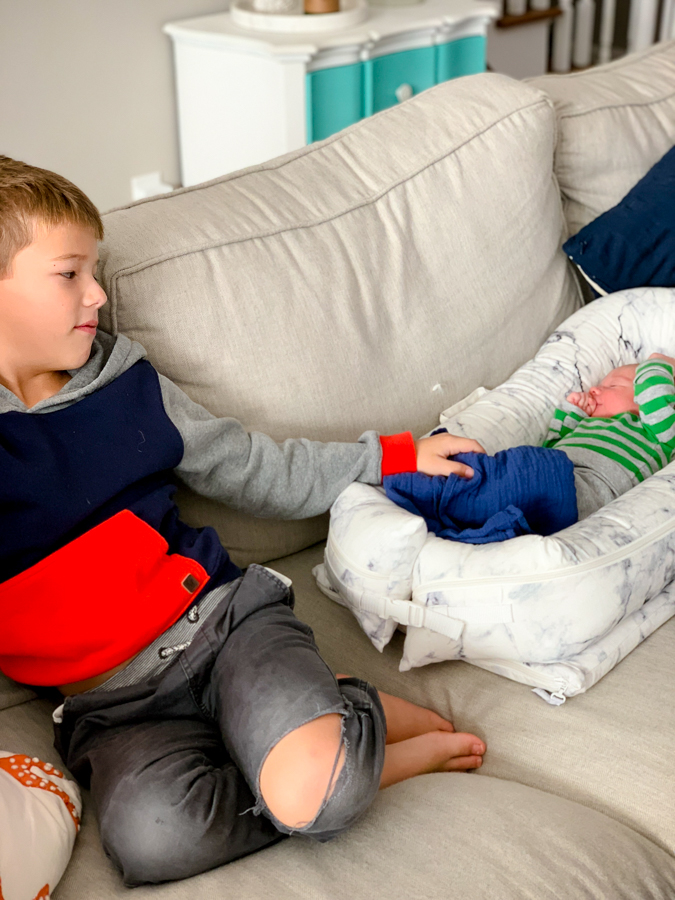 All of Mazen’s pants from last winter have ripped left knees!

Mazen often comes up first thing in the morning for a visit to us both and always gets excited when Birch wakes up and opens his eyes. Birch has started to track our faces, and he looks very intently at Mazen.

Naturally I call Birch all kinds of cutesy names – Mr. Birch, Little B, Cutie Bean, Snuggle Pumpkin (sorry, I know those are annoying!!). But what’s funny is that Mazen has adopted the names as well and will say with a serious face “When do you think Cutie Bean will wake up?” His affection towards B has been my favorite part of watching him become a big brother. 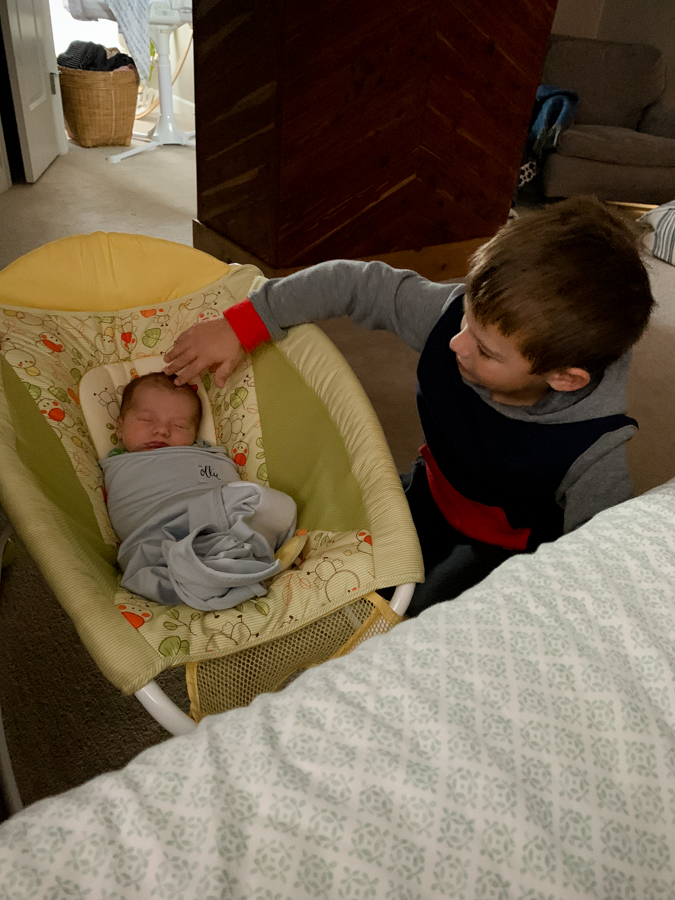 Mazen doesn’t like it when Birch cries, and he’s tried to help me soothe B a few times. I can’t wait until Birch is old enough to respond to Mazen’s face and Mazen can make him smile and laugh! That will give Mazen a whole new role and sense of pride, I’m sure. 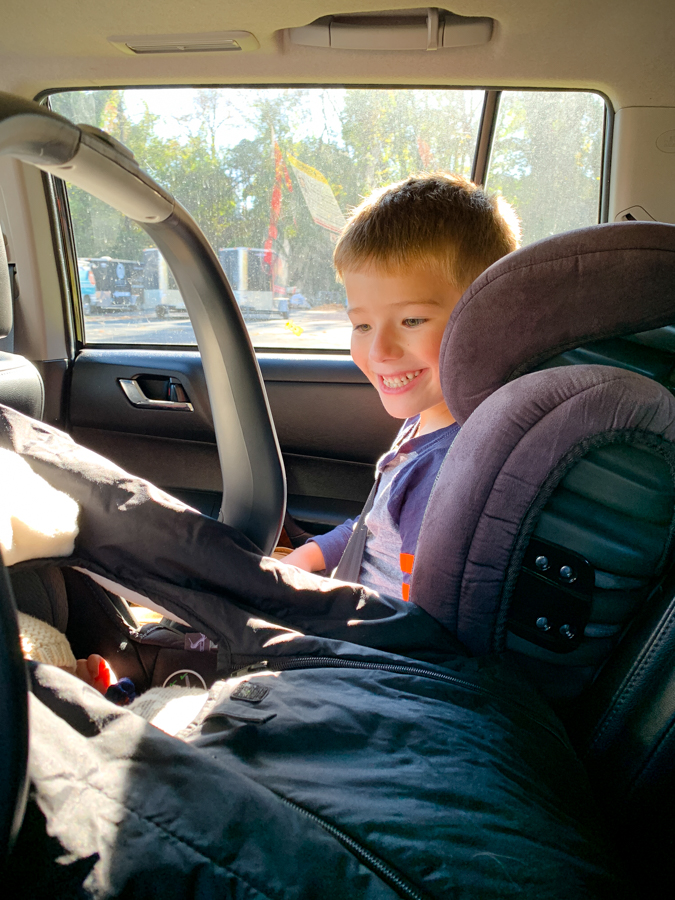 As for being a mom of two boys, it’s been both really hard and fairly easy depending on the moment. Easy in this moment when I was able to take a shower with B happy in his seat and Mazen playing Pokemon cards on my bedroom floor: 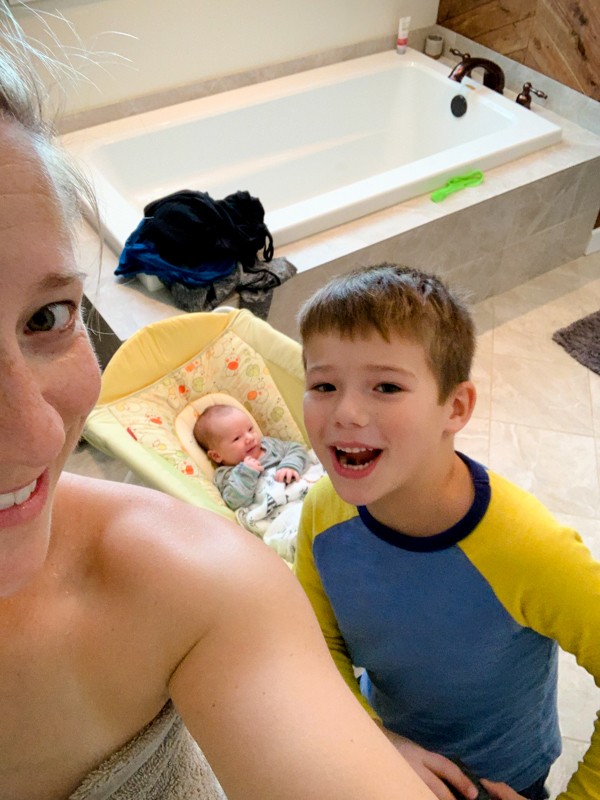 And hard when I was nursing on the couch and heard Mazen and our neighbor discussing how best to “sled” down the stairs in a cardboard box – eek! I had to jump up and intervene. It’s much harder to keep track of what Mazen is up to when I’m stationary while nursing or changing a diaper (or even just having a baby in my arms).

What I have realized though is the power of my voice. Even though my hands are often tied up, my voice is always available. Things I used to do myself I’ve been able to delegate through voice. One night I was able to verbally walk Mazen through how to draw his own bath in my tub. He turned on the faucets, adjusted the temperature, added bubbles, got his bathrobe and some toys, and got in the bath all by himself.

I’ve been able to play Legos using my voice too. Mazen controls my person by making her walk or get in a Lego car, but I make her talk. 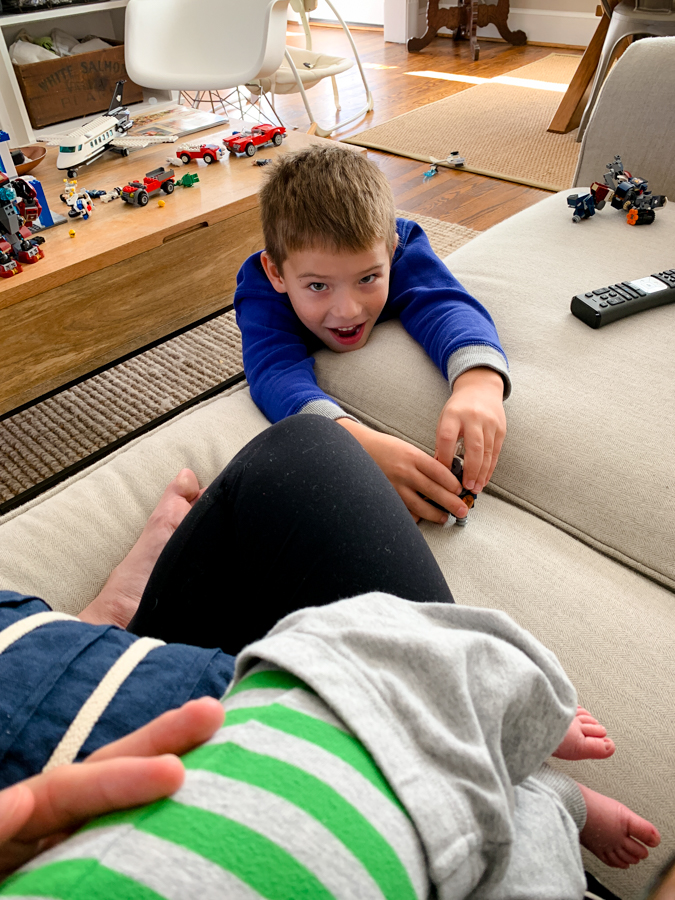 When I read stories at bedtime, Mazen holds the book and turns the pages, and I read the words. 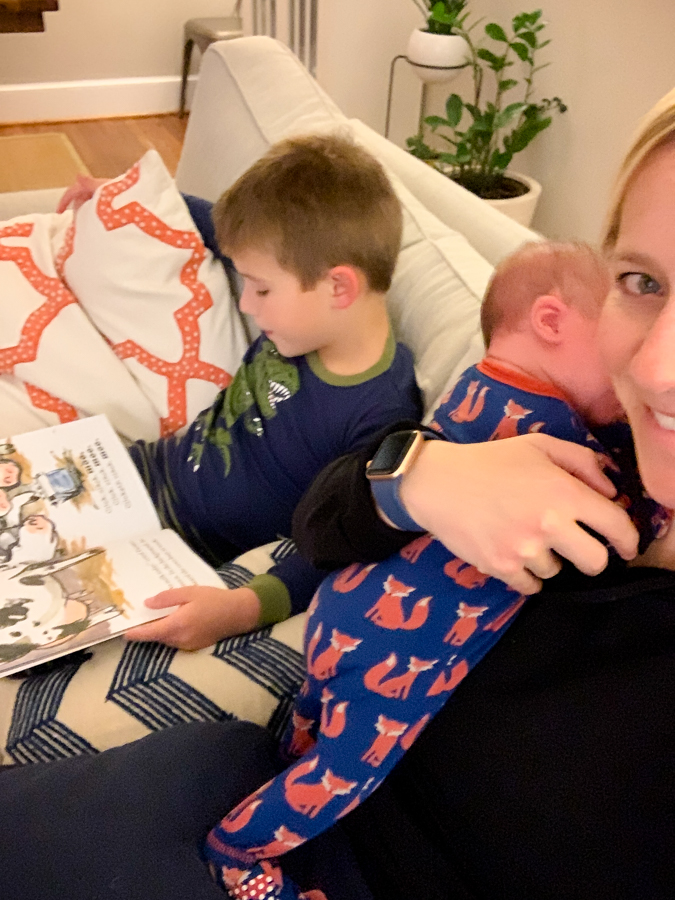 Mazen has been really helpful too if I need some water or for him to retrieve something simple. I’ve stocked our pantry with a lot more single serve snacks. That way if he needs a snack he can get it himself, already portioned out and at his reach.

I know age gaps are often not planned, but I am loving ours! Mazen understands so much of what’s going on and we haven’t had any jealously/behavior issues (yet, at least). And while they might not ever be close enough in age to play toys together, I have no doubt that their brotherly bond will be super strong. And I’m not gonna lie: it has been awesome to have Mazen be in school for the majority of the day. I seriously do not know how people have newborns and 2 year olds at home all the time! You moms have some super energy.

I do feel a little guilty (for lack of a better word?) that Mazen spends time at Matt’s so I have breaks from having both kids in my care. But I will say that during these early, sleep-deprived days, that has been such a blessing, especially when school is out or on the weekends when Matt takes Mazen out for activities.

Our most challenging times with two have been at 6 am when I’m nursing, still half asleep and disheveled, and Mazen refuses to get out of bed without me. Thomas has been so helpful though, and he makes Mazen a smoothie and helps me get him out to the bus. (I can’t imagine if I had to drive him to school every morning! Three cheers for the bus!) Because this all happens so early, there’s not much I can do to plan around it, like nurse Birch earlier or get up earlier – because I am so desperate for sleep myself. We’re working on it all though! 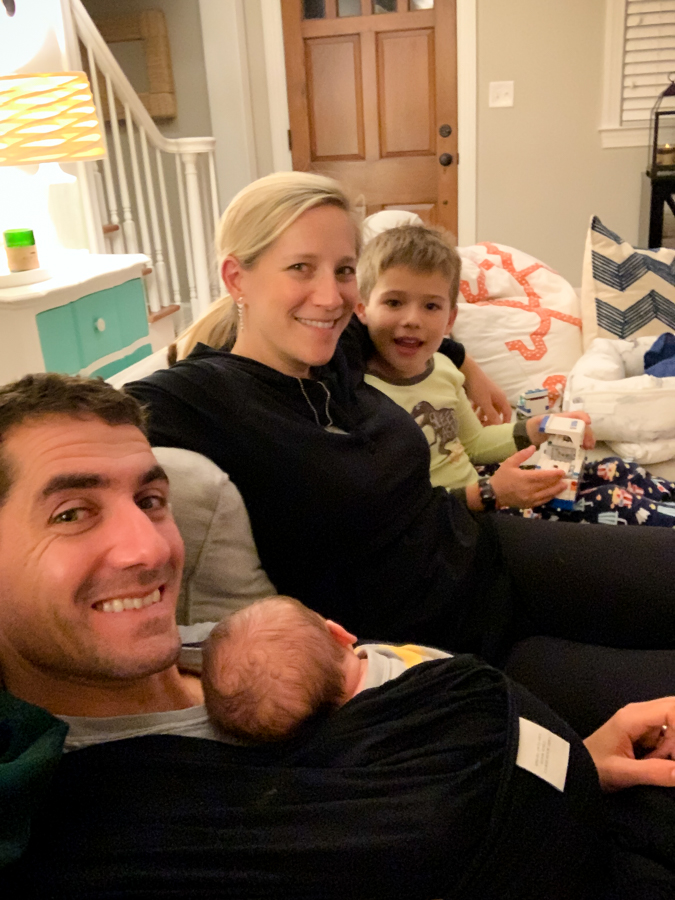 See the necklace that I’m wearing in this photo? 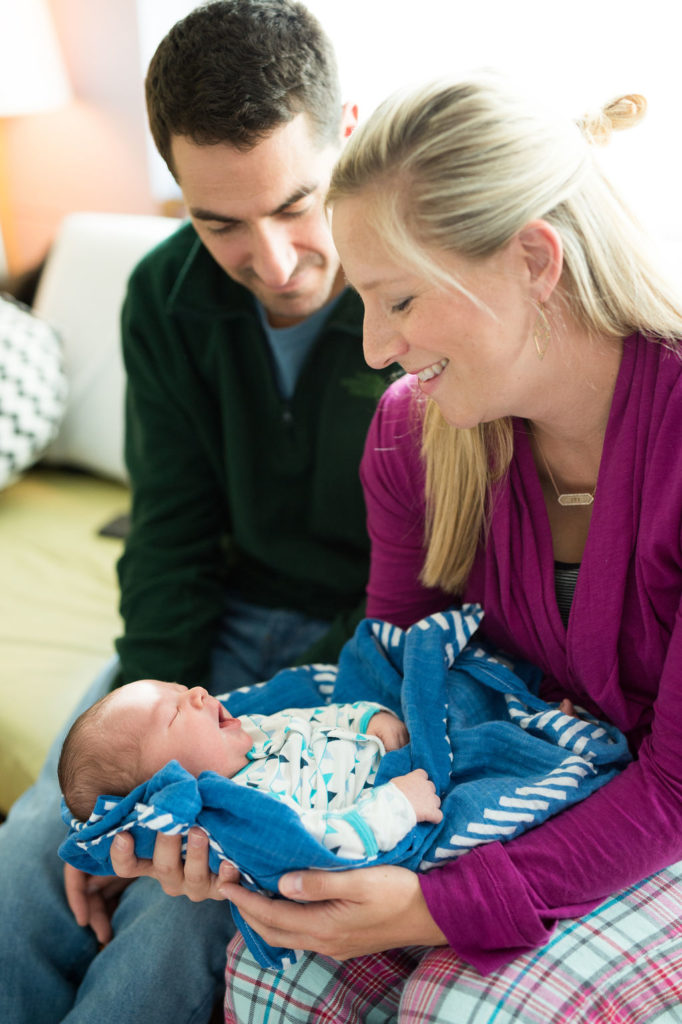 Here’s a close up. Thomas gave me a gift certificate to Stella and Dot for our wedding anniversary so that I could pick out an engravable piece with the boys’ names. I knew immediately that this rose gold pave wood necklace was perfect and had their initials engraved. I love it! 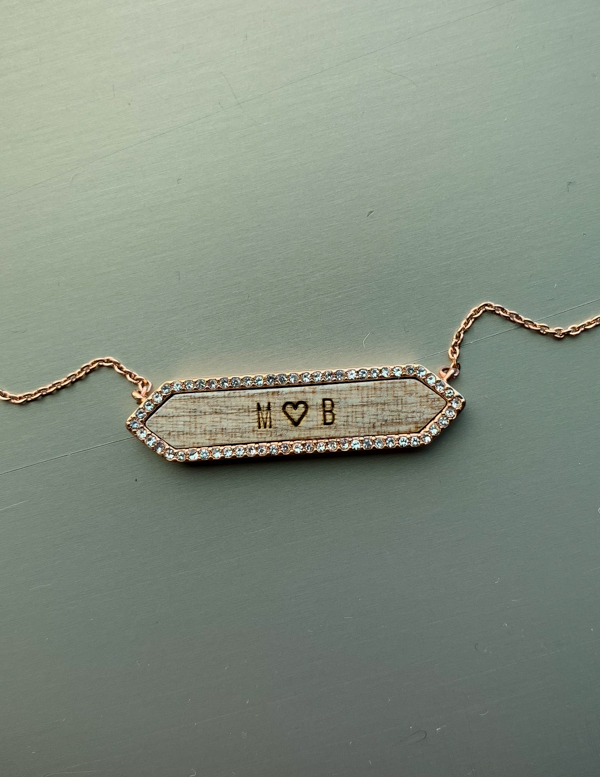 Overall I feel the same as many mothers do: double the kids, double the love! 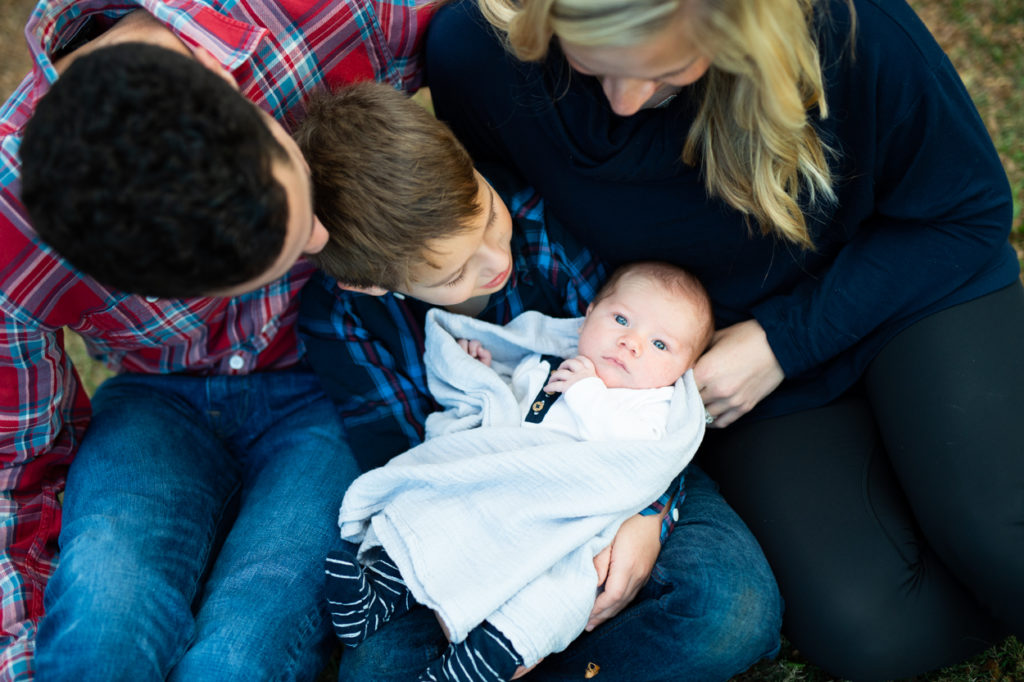