You are here: Home / Lifestyle / Back To The Kitchen 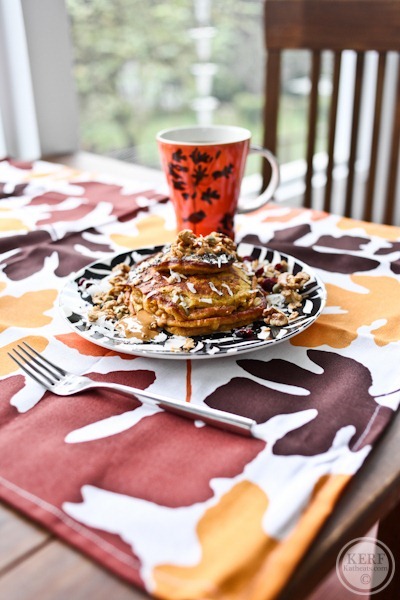 Nothin’ like pumpkin pancakes to start off October right! 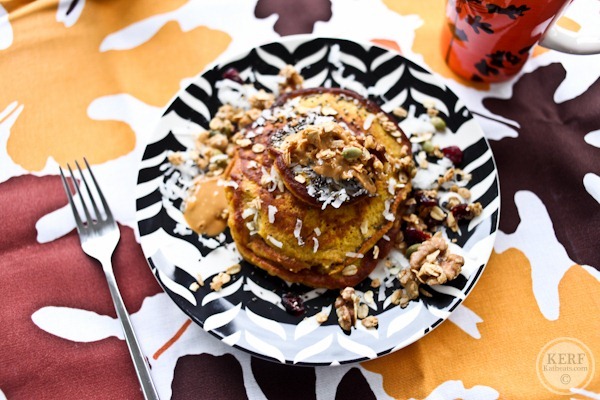 On Saturday Matt was up at 3am to do sweets at the bakery, so I had Maze the whole night and was on my own for breakfast. Once we were all fed and dressed, I put him in the wrap and decided Saturday deserved a special breakfast, sleep deprived mom of a newborn or not!

I made our Great Harvest pancake mix and added 1/3 cup canned pumpkin to the mix. Pumpkin makes the softest, most tender pancakes imaginable! I topped my 2.25 cakes with granola, Barney Butter and coconut flakes. Note the Barney Butter melting + oozing out from the middle layer! 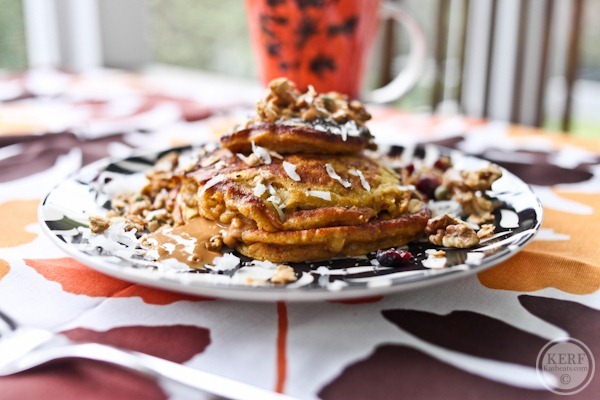 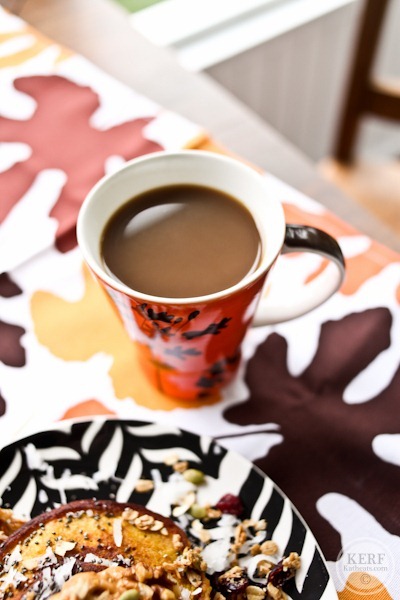 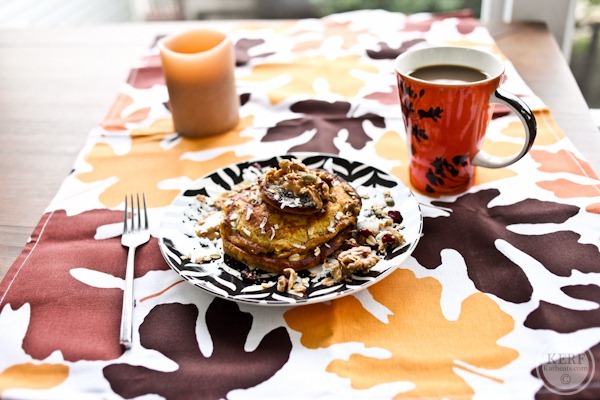 Matt may have started his day early, but it meant he was home by 10am, and we walked to the market for some excitement. 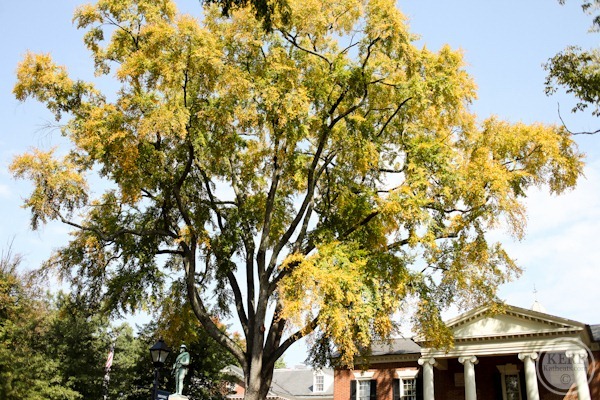 I have completely changed my tune about the Bugaboo basinet! Now that Maze is a little bigger with much better head control, the jiggling of this is great and I LOVE that we can swaddle him in it and don’t have to mess with buckling him in = better naps. We’re a little embarrassed at how huuuuge it is to push around, but he certainly looks more comfortable and enjoyed a long nap during our walk. 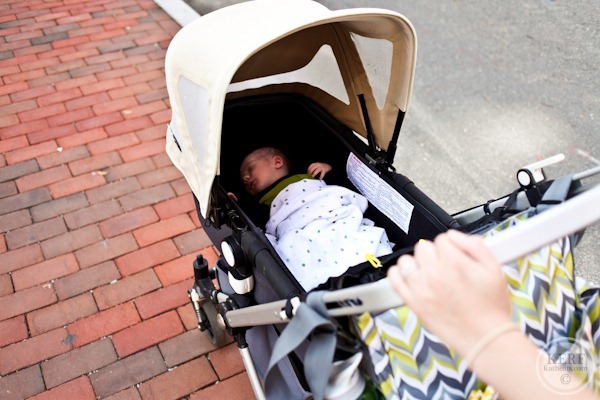 He couldn’t wait to meet his No Bull Aunties! 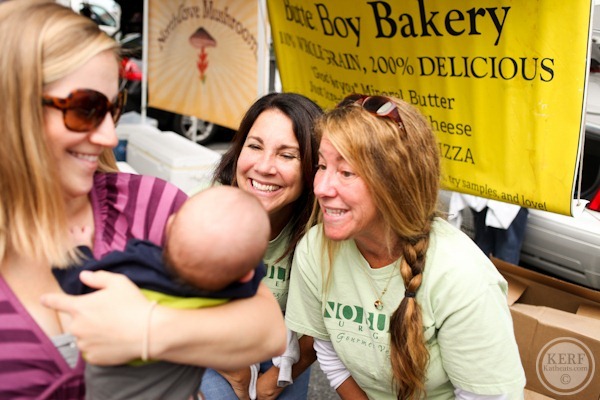 We look forward to seeing them at the market every Saturday : ) 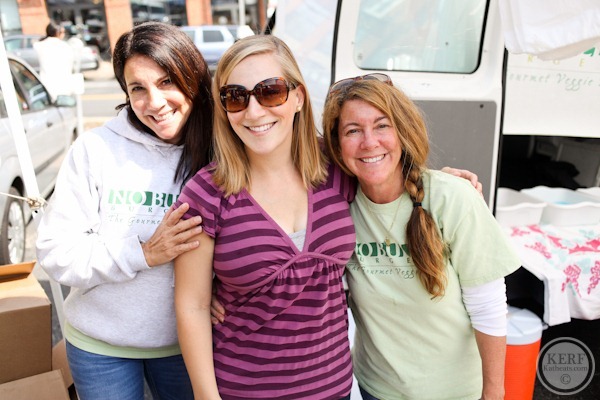 Somebody woke up from his nap and wanted to eat. 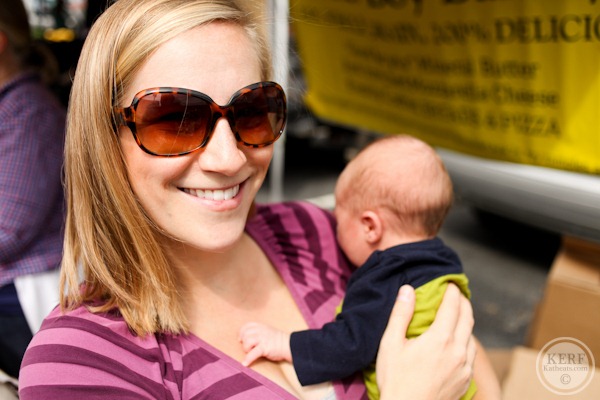 In some ways, leaving the house is terrifying. What if he starts screaming? But in other ways, it’s kind of liberating to think: “If he cries, I just have to find a place to sit and feed him. That’s all!” Thus, my plan for the market is always if he cries I’ll go sit in our Great Harvest truck to nurse.

But since we were at the No Bull booth, they offered to let me feed him in their truck. 30 minutes later, we were ready to continue our adventure! 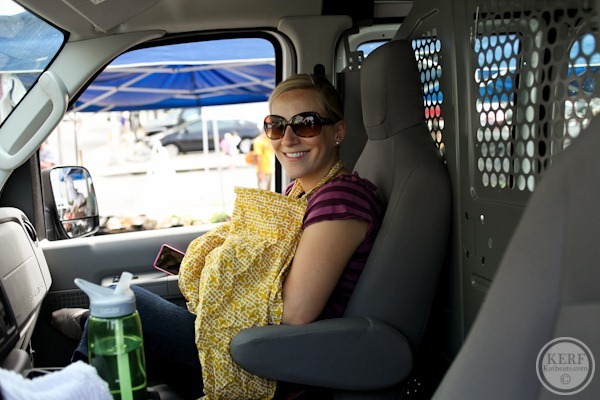 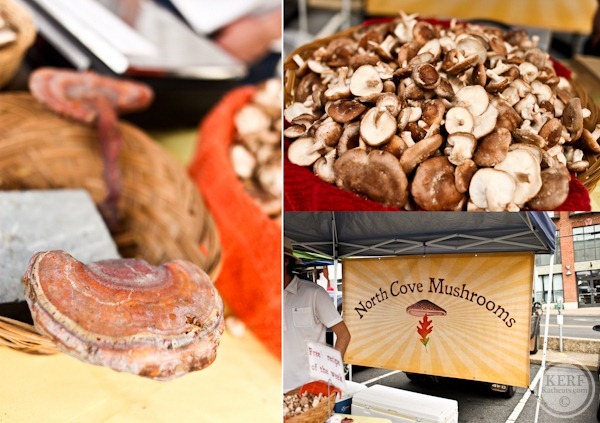 When the market ended, Matt and I stumbled upon the Cville Vegetarian festival – 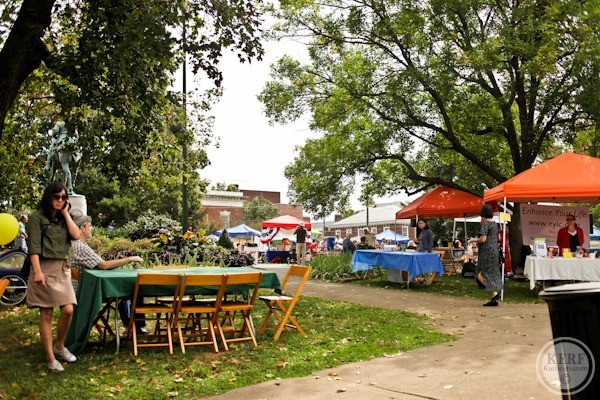 He soothed Maze while I walked around by myself for a bit. (It was weird to be aloneeee!)

Isn’t this a sweet picture? 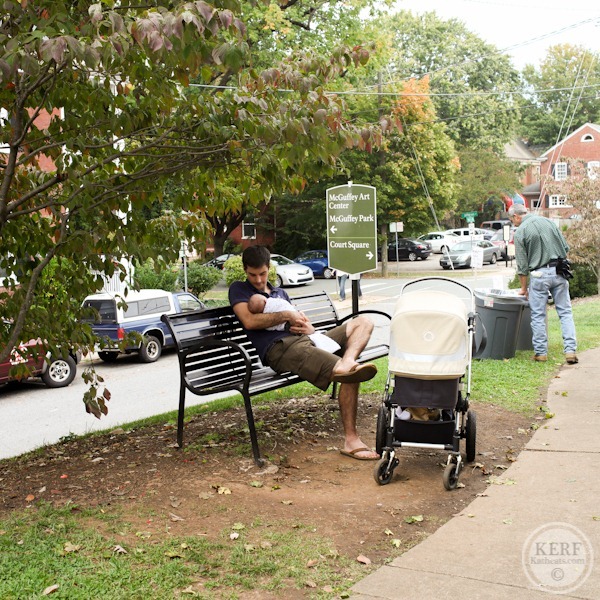 Back home for lunch, I reheated up our Dr. Ho’s pizza 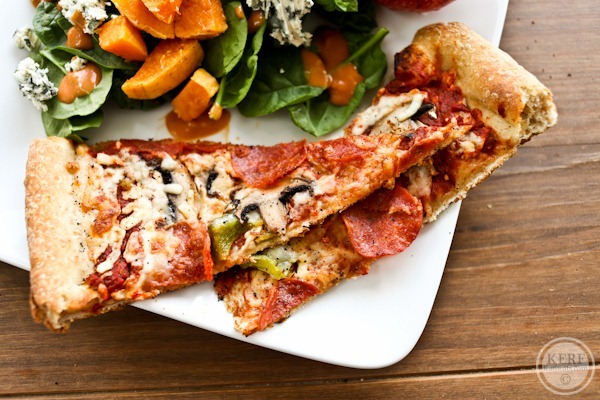 Served with my favorite salad of the week – baby spinach, squash (the last of it!), Bleu D’Auvergne and Woodstock dressing 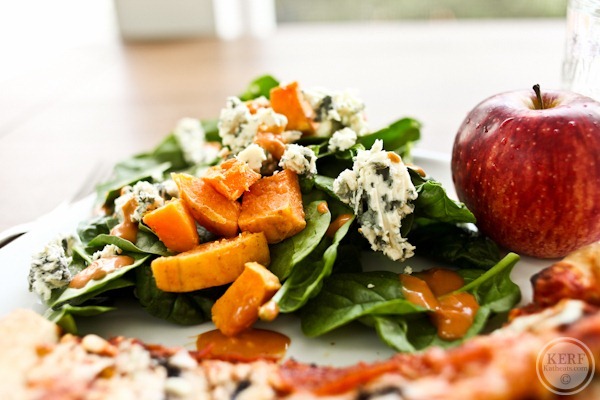 And a local apple! 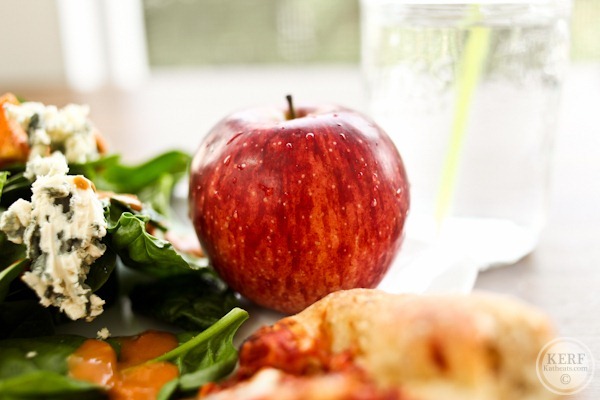 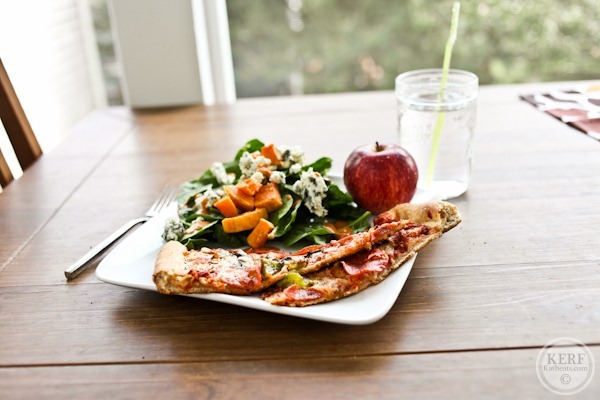 When Maze when down for a nap with Matt, I decided to BAKE!

I have never been much of a baker. For a bunch of lame reasons – like I don’t want to dirty up the kitchen and it’s too tempting not to eat too many of whatever I make and because we own a bakery and if I want a cookie, I’ll eat one of ours! When I was pregnant, I didn’t want to spend much time in the kitchen baking or cooking. It was like food just lost my interest and I wanted to eat what other people prepared as much as possible. I have no idea why! 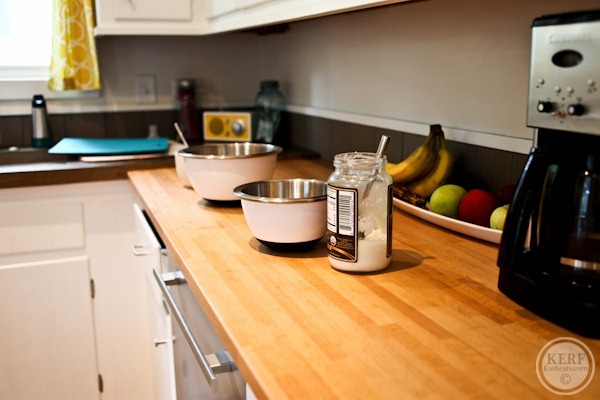 But now that I’m no longer pregnant, something within me is dying to bake + cook! Maybe it’s mom hormones gearing up for birthday parties and mothers groups!? And ironically, now I can’t spend much time in the kitchen because I have a little one to care for : ) But while he napped, I decided to start a recipe and if need be, Matt could finish it if I had to go nurse. 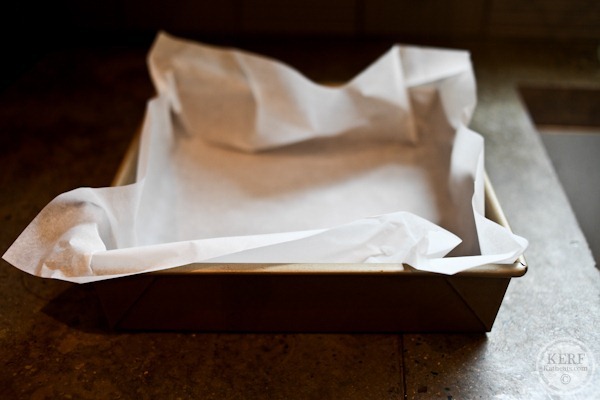 But today I decided to make Alex’s Apple Crumb Bars!! 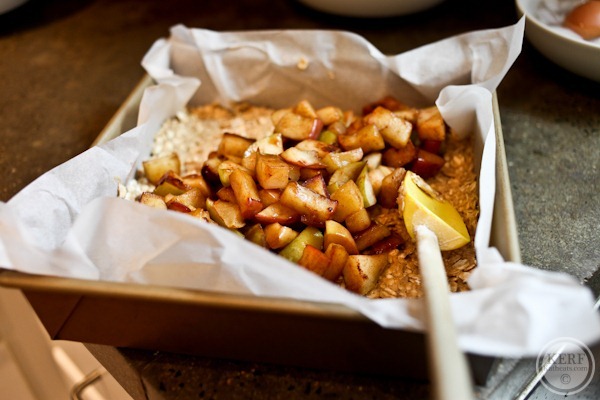 I [hygienically] nibbled on ingredients while I cooked for afternoon snack, but I didn’t get to taste the bars until after dinner. 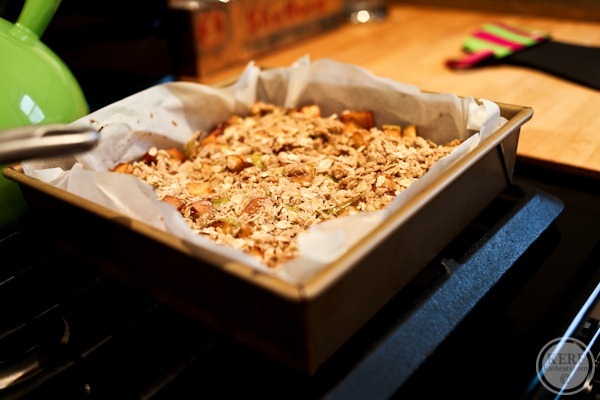 [Also inspired to be in the kitchen, I hard-boiled some eggs for weekday lunches : ) ] You guys who told me eggs are easier to peel if you crack the shells before putting them in the ice bath were spot-on right! 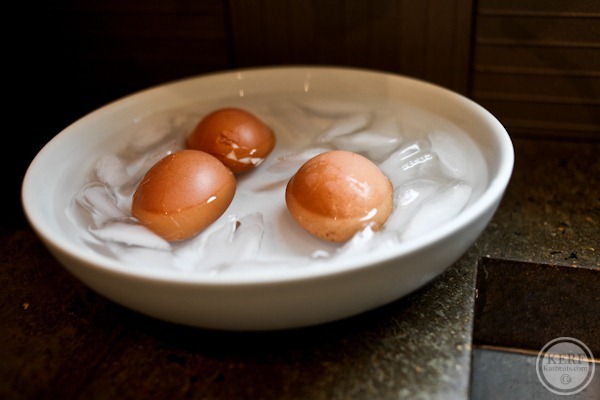 At 6, Karen came over for dinner and brought ingredients to make quesadillas! I turned her on to them after making her one for lunch one day. 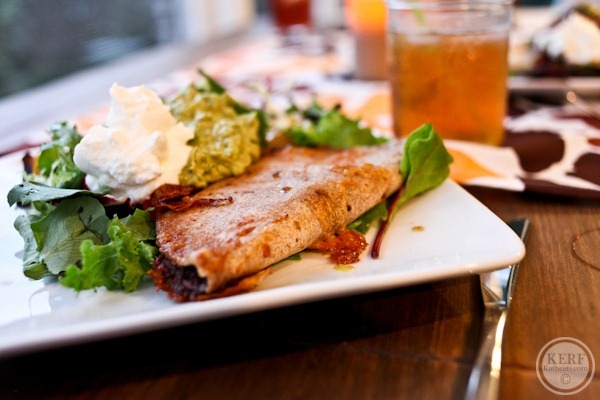 We used Whole Foods whole wheat tortillas and stuffed them with WF black refried beans, salsa and lots of white cheddar cheese – baked in the oven until nice and crispy at 350*. 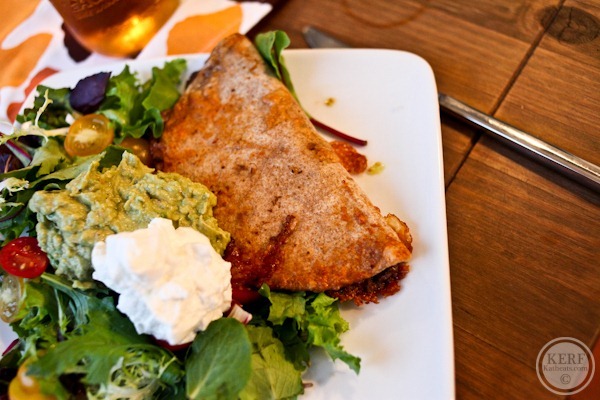 On the side we had salads topped with tomatoes, guacamole and greek yogurt. 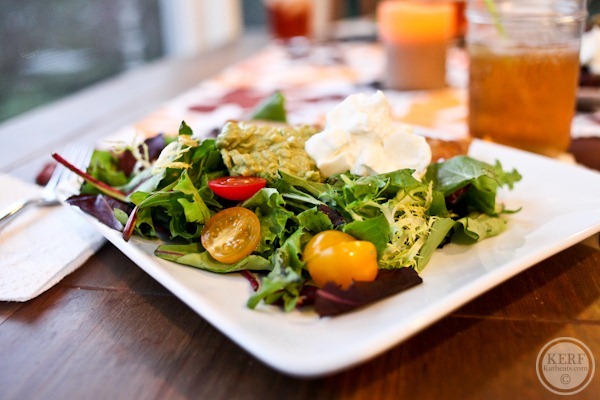 And Karen’s sweet tea to drink. 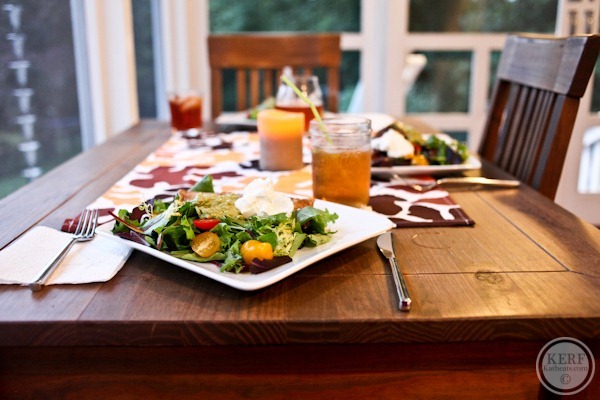 All through dinner, my mind was on the apple bars. The verdict is that I LOVED them! The crust is kind of like shortbread and they are not too sweet at all. They are on the dry side, but I absolutely loved the texture. I’d give them about a 50% healthy rating for having lots of whole grain oats and apples and coconut oil for the topping but some points knocked off for a good amount of butter and brown sugar. 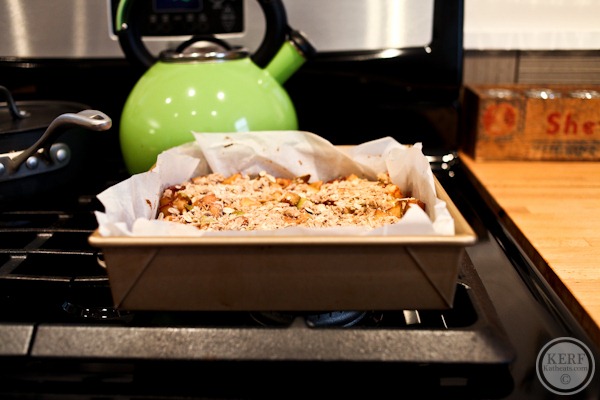 In fact, they were so tasty I was curious to know the nutrition information, so I plugged the recipe into the Sparkpeople calculator. They are denser than you would think! 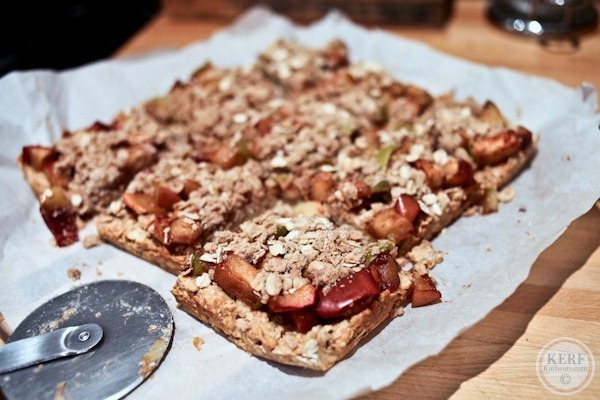 We were only missing a scoop of vanilla ice cream!