Here’s my first recipe using my sourdough starter! I gotta say the results were mixed: on the one hand, the flavor of the sourdough was amazing!!!! BUT the bread was not leavened enough, so I pretty much have these flat, dense hunks of (delicious) bread.

As noted before, Ciabatta is a bread defined by its high water content in the dough, as well as no shaping into a loaf. As a result, it develops large air pockets in the dough, and a hard crisp crust. The difficulty of making this bread is that it’s like kneading muffin batter. So here’s what I did:

As mentioned on the sourdough page, because you’re usually taking a portion of your sourdough starter out of the fridge, it needs to be reanimated before its full potential will be realized in baking. In this example, I made a poolish (defined as a mixture with equal parts by weight of flour and water). Once again, here’s another reason to use a scale to measure your ingredients so you can be exact.

I used 153g of my sourdough starter (half of it), which based on its ratio of 4 parts flour to 5 parts water, comes to:

To this I added:

Which resulted in a gooey paste of equal weights flour and water. This was 30% of the recipe’s total flour amount. I let it ripen for 12 hours overnight: 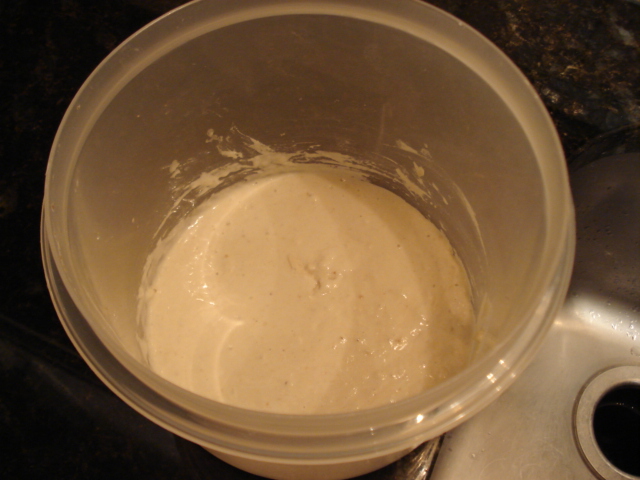 The next day I added the rest of the ingredients:

In my Kitchenaid mixer I stirred everything until the mixture came together, then 3 minutes on first speed and 4 minutes on second speed. I had to use a spatula to scrape down the bowl a couple times. True to ciabatta’s nature, this was a barely-cohesive blob of dough: 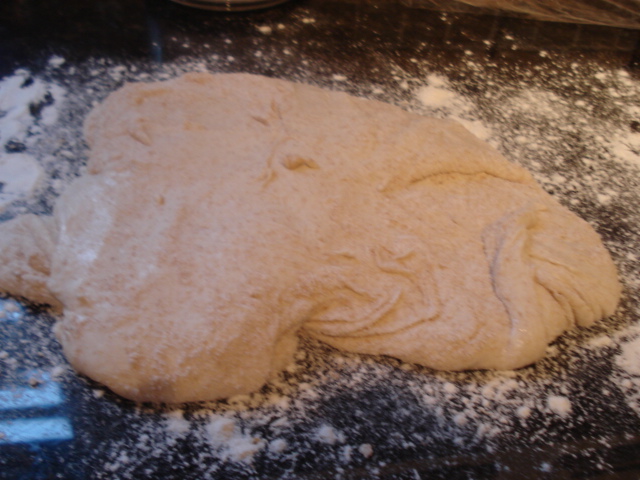 After this, turn the dough out onto a heavily floured surface and proceed with bulk fermentation of 3 hours. Fold the dough after the first and second hour of fermentation. Then after the third hour, divide as desired (you could definitely make little rolls out of this but each little blob would be a chore to handle… maybe one day I’ll do it). After a brief rest, you can stretch the dough to the desired shape. I kinda like long loaves for ciabatta. I allowed it to rise for about 1.5 hours after shaping. 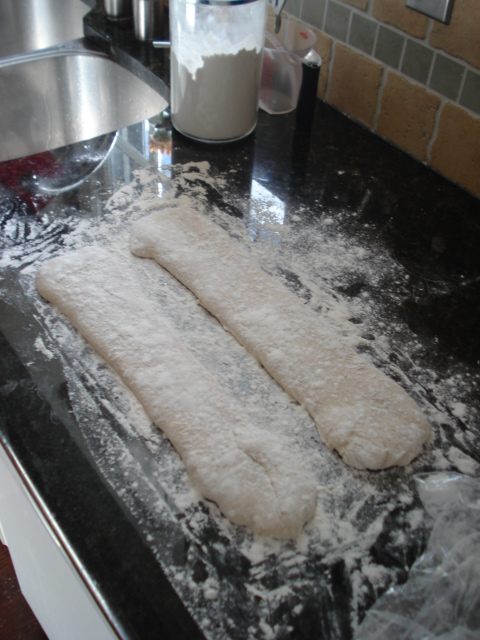 Pop it into a 450* oven for about 23-28 minutes (if you’re making this shape) and remove when it takes on some nice color! 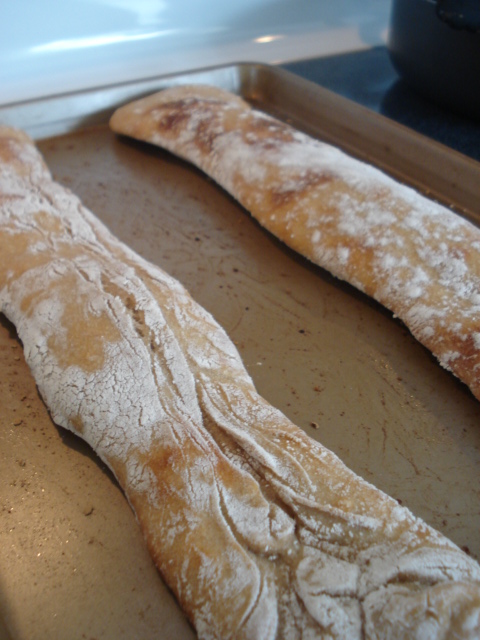 So they look really pretty, but they just weren’t leavened enough. There are MANY possible reasons and I’ll review them all. In retrospect, I probably should have just made a plain, sourdough bread loaf in a 9×5 pan, but I guess I thought I was too cool for that!

1) Is my sourdough starter strong enough? Meaning, are the yeasts active and healthy enough to appropriately leaven bread? I think so – I felt I did a pretty good job making the starter, its flavor is great, and whenever I checked on it there were always bubbles throughout.

2) Did I let it ripen enough? I’m giving about 33% weight to this possibility. When I combined the starter with the rest of the flour to make the poolish, I let it ripen for 12 hours in a warm spot. That’s a pretty long time to develop the yeast. Still, the instructions are usually “12-16 hours” so next time I’ll let it ripen longer.

3) Did I let it rise long enough? I’m also giving about 33% chance to this. I must say that I was impatient and ready to eat lunch, and I put the bread in the oven before I noticed significant rise in the doughs. Still, it’s hard to tell with ciabatta because of the shape. Running counter to this possibility is the fact that I let it ripen for 12 hours, and then ferment for 3, and then rise for another 1.5… I’d say that’s quite awhile to let the yeast do their thing. On the other hand, every bit of advice I’ve seen recommends a long rise for sourdough breads.

4) Other factors? Here’s where the other 33% lies. Is ciabatta too heavy for weak little sourdough yeasties to rise? Possibly… Maybe it was the combination of some wheat flour with the ciabatta method? Wheat does punch little holes in the gluten making it more difficult to trap gas, but I did do a little more kneading to counter this. Maybe I didn’t do as good of a job with the shaping of the ciabatta? I think this is a possibility. It was a little more wet than my previous ciabatta effort, and stretched too easily, once again pointing to not enough gluten development.

Oh well, I’ve said it over and over that baking is a learning process and now you get to see me “eat” my own words. To the next project!