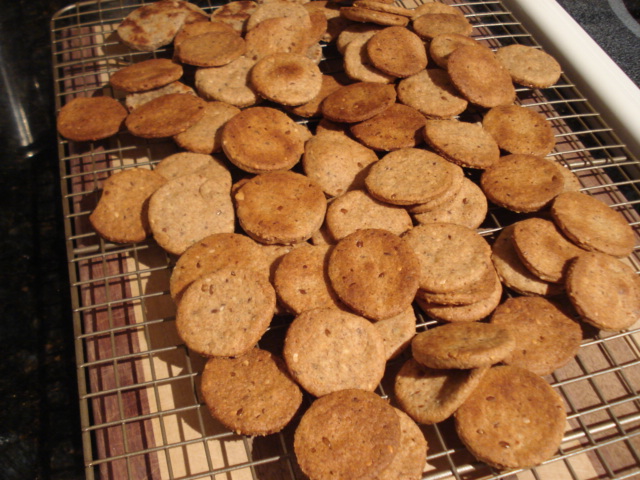 These crackers are AWESOME and so easy to make.  There’s lots of room for variation as well. It makes about 100-150 crackers, depending on how big you cut them and how thinly you roll them.

The first part of the recipe is the only bit that might be out of the range of most bakers, and this purely has to do with equipment and not skill. You have to take various seeds and use a spice mill/coffee grinder to pulverize them into a flour. I don’t think a food processor would work here, so sorry to those who don’t have the means to grind your own seeds! You can probably find various seed flours at upscale grocery stores, though.

So to start you’ll need:

Thirty minutes before grinding, I actually the put the seeds in the refrigerator. The reason for this was to avoid turning the seeds into seed-butter through the friction of the grinder. It helps to work in batches, too. Also, since the sesame and flax are nearly the same size, I ground them together, and likewise with the pumpkin and sunflower. 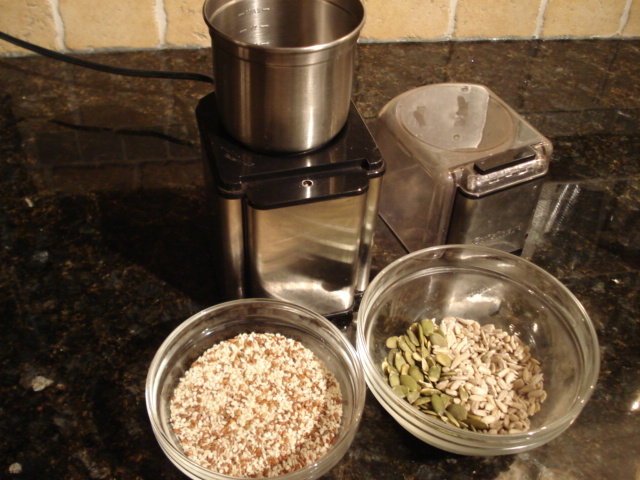 Here they are ground up and sitting on top of the flour. You’ll notice that there are still some bigger seed pieces in there – no problem: 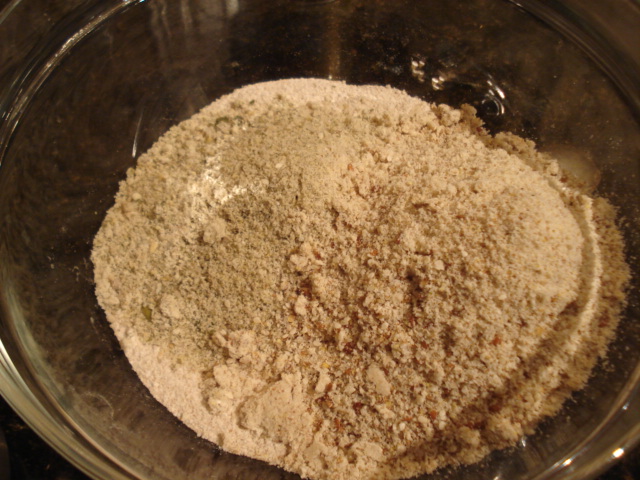 To the ground up seeds add:

Mix with your hands – no mixer is necessary because gluten development isn’t really the goal. Knead for about 3 minutes to distribute the ingredients. It will feel like a slightly moister pie crust – not able to be stretched very much and slightly crumbly. Start preheating the oven to 350*. Allow the dough to rest for 20 minutes for the water to absorb. Divide it into workable size pieces for rolling. Roll the dough as thinly as it will allow, which is probably about .25in. We actually left them a little thicker, and as a consequence they have less crack and more chew. So it’s your preference. 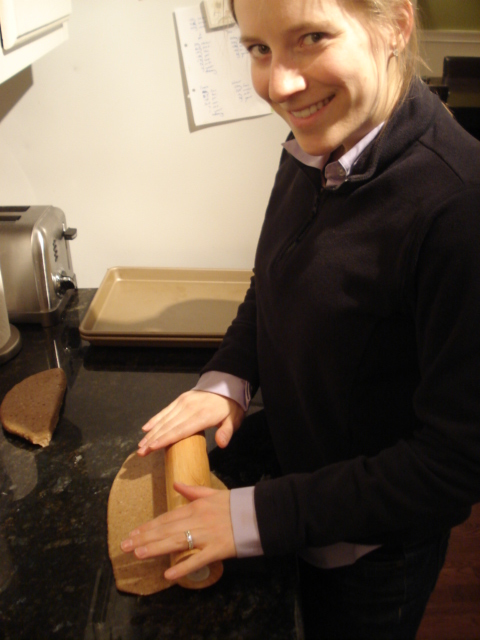 After rolling, cut into any shape you want. We used these cool antique cookie cutters from Kath’s grandmother: 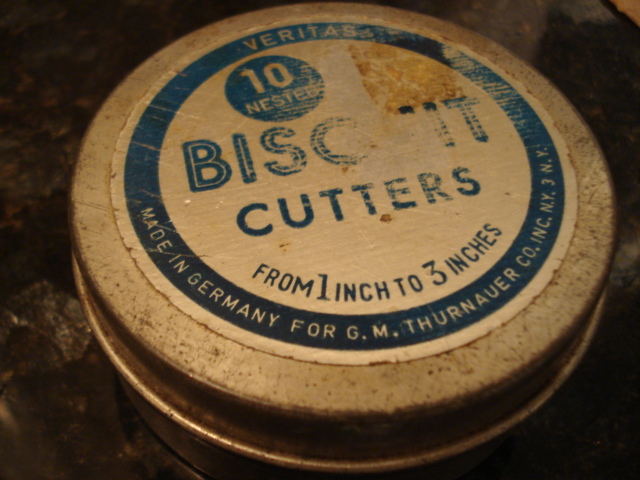 I think the one we used was about 1.5in, but you could really do any shape. A pizza cutter would also work – run it in one direction to cut long strips and then come back at a diagonal angle to cut diamond shaped cookies. Most important is that the crackers are roughly the same size so that they’ll cook evenly. 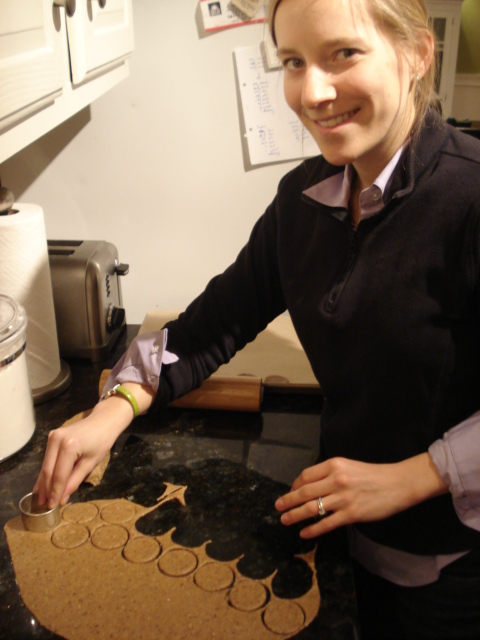 Obviously when you’re cutting circles you’ll create a lot of scrap dough – this can easily be rerolled and cut again. Place the shaped crackers on a sheet pan. They shouldn’t be touching, but they can be very close to each other because they won’t really expand that much. Place in the oven for 10 minutes. 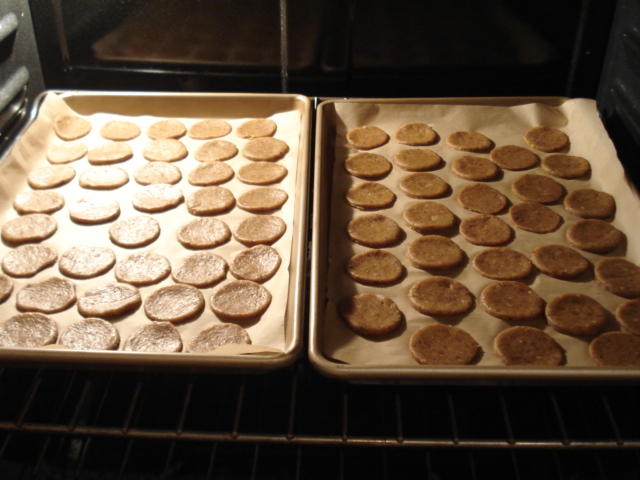 After 10 minutes, switch the pans left to right, and rotate them front to back. Bake for approximately 10 more minutes. If you rolled them thinly, you’ll want to keep on eye on them during the last couple minutes of cooking. They can withstand a fair amount of cooking, though, so just don’t let them burn.

After baking place on a cooling rack, uncovered. They will taste great when they’re warm, but allowing them to completely cool will make them a bit harder and give them some more crunch.

If you’re into toppings on your crackers, there are lots of things to do. If you’re going for seeds, you can probably brush some eggwash on top and sprinkle seeds on top. Also you can give them a spritz of oil when they come out of the oven and sprinkle. Kosher or sea salt would made a nice touch as well.

Enjoy with your favorite dip! 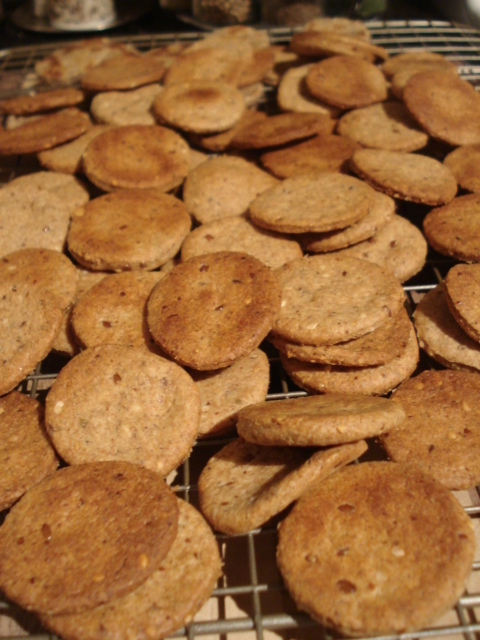