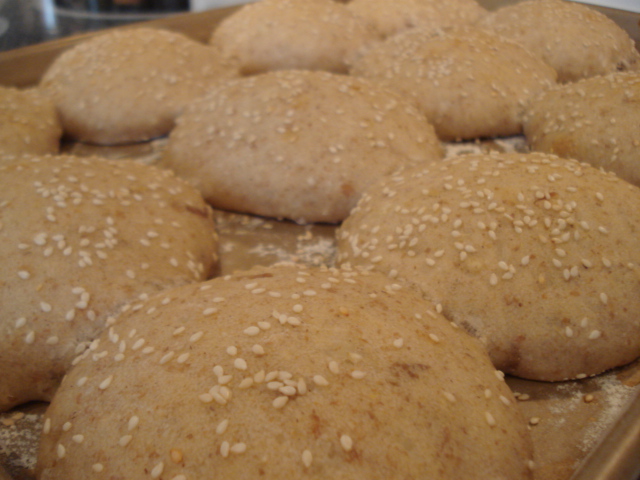 As a kid, when my parents would go on week long vacations they would always hire a sitter to take care of us, Mrs. Adams.  You know how you take for granted your family’s habits until they’re not around?  Well Mrs. Adams would ALWAYS buy potato bread, and I hated it.  I think the main reason was because it was an ugly yellow-orange color.  Also it had a sweetness that I wasn’t fond of.  So for years I’ve avoided the stuff.  Well now that I’m a bit wiser, and I love potatoes, and I’m always looking for exciting new breads, and I’m trying to lower the calories in my breads, I felt it was time to give it a try myself.  And they’re great!  First I’ll give you the recipe and method, but make sure you don’t skip the notes at the bottom because there are a few things to know before you dive right in.

Mix all ingredients together, place in a warm location for 12-16 hours.

Place all ingredients EXCEPT potatoes in mixing bowl.  Stir until dough comes together.  Add potatoes and begin mixing on 1st speed for 3 minutes.  Mix on 2nd speed for 5 minutes.  The dough will appear very dry when mixing begins, but as the water from the potatoes is absorbed it will slacken.  The dough should be quite sticky, with strong gluten development.  Note that the potatoes will make for a less strong dough, which is why it is necessary for a longer than usual 2nd speed mix.

Turn dough out onto a lightly floured surface and begin bulk fermentation for 2 hours.  Fold after the first hour.

After fermentation is complete, fold once more to tighten dough, and then divide into 3oz portions.  Roll these into very tight balls and place on a lightly floured surface: 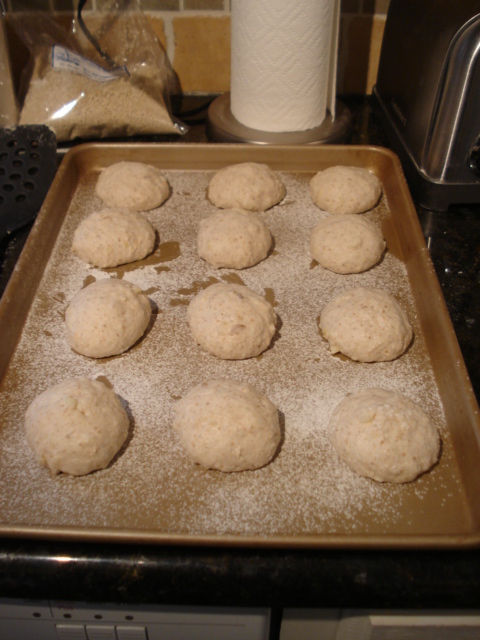 Allow to rest for 20 minutes before final shaping.  After resting, take each dough ball and gently roll them out to approx 3-4 inches wide.  The dough will be so soft that you will barely have to use any force on the rolling pin – just move it across the surface and let its weight stretch it out.

Place dough discs on a floured pan (if you’re using the same one that the balls sat on, make sure to reflour) .  Leave a very tiny space between each roll, and if they touch it’s okay.  If using toppings, brush a little egg wash on the surface of each and sprinkle toppings on.  I used sesame but flax or poppy seeds would be nice as well.  Make sure whatever you put on top is untoasted: 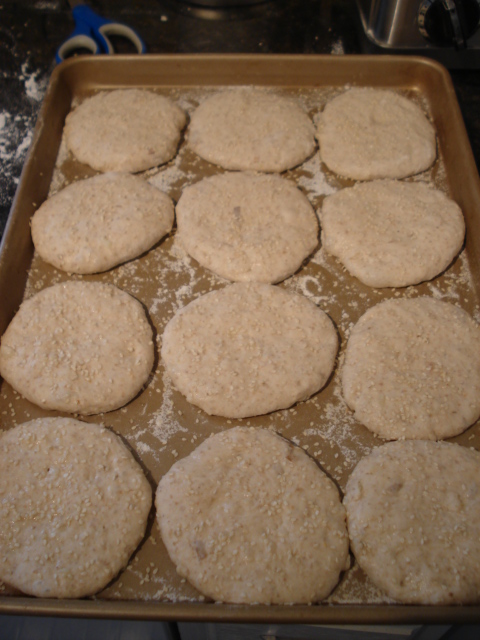 Preheat oven to 420* and allow dough a final proof of 30 minutes.  Bake for 12-15 minutes, until barely showing color (normally I’d bake bread longer but the goal with hamburger buns is to have real doughy, soft bread). 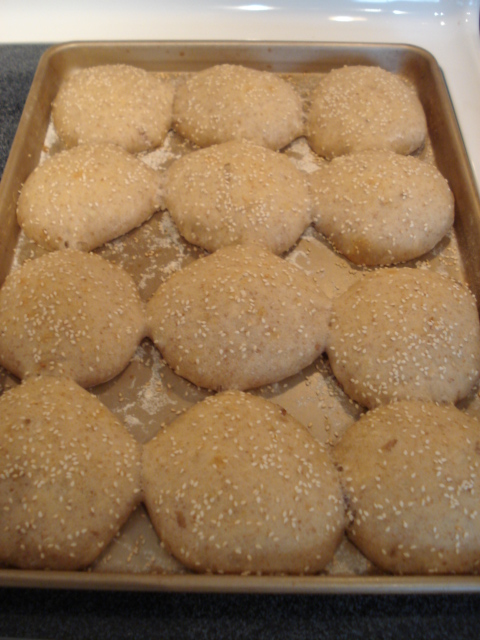 The great thing about potato bread is that it makes a very soft bread due to less gluten development.  Also, roasted potatoes are about 1cal/g while flour is about 3.3cal/g so incorporating potato into your breads will allow you to have more voluminous bread for the same amount of calories.

The problem of course, is how much potato can we add to a bread?  After doing some research, it seems like the maximum  most bakers are willing to put in is 30% of the weight of the flour.  That’s in baker’s percentages.  In terms of composition of the whole dough, approximately 25% of the flour can be substituted with potato.

This recipe has 30% potato and I can definitely imagine having trouble with gluten development if you added more than this.

But all of this naturally leaves us with one difficult question: how much does roasted potato weigh?  If you baked a whole potato in the oven, and did the same in a microwave, they would certainly weigh different amounts.  And if you cut a potato into small cubes and roasted those, they would weigh differently as well.  It all has to do with the amount of water lost during cooking, and this drives me crazy.  In my efforts to apply an exact scientific method to baking, I try to eliminate as many stray variables as possible, but this is one where you just have to work with what you have and see how it comes out.

My best recommendation would be to bake a whole potato (350* for 1 hour) and use 150g or .5C of this.  My guess is that baking it whole minimizes water loss, as compared to other cooking methods.  This way we’ll have a starting point.  If you mix your dough and it still feels stiff after the 2nd speed mix, then add a little water (probably no more than 1oz).

But really, you could use any form of potato, so long as you kept in mind the other things that come with it.  For example, if you added mashed potatoes, you’ll want to keep in mind not only the extra liquid that comes with them, but also any salt.  Also worth noting, because I love the skin of potatoes, I included them in the dough for texture and flavor.  As a consequence, I made sure to cut the potato into very small pieces before adding to the mixer.  We wouldn’t want a huge mess of skin all stuck together in the dough, and the mixer won’t be strong enough to break it up too much.

Ultimately, as long as you don’t go overboard with the amount of potato you’re putting in, you’ll be fine.  Have fun! 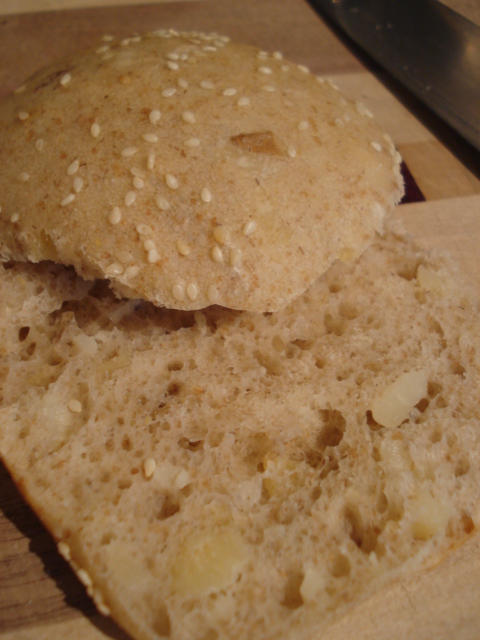