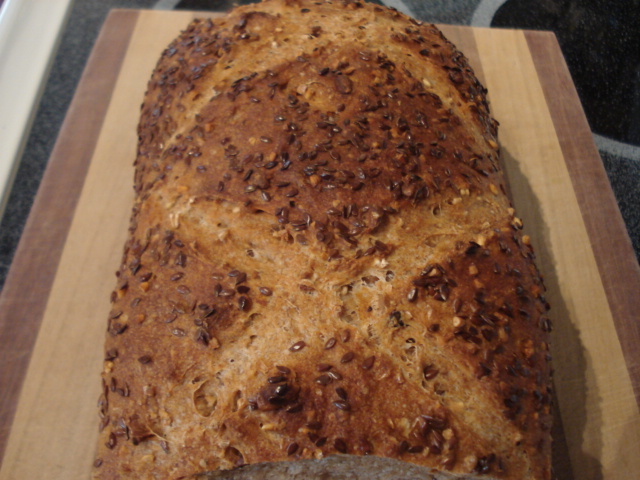 This is a pretty simple recipe I wrote based on Kath’s Breakfast Bread, and is only slightly more difficult to make. First, some notes:

1) You’ll notice I used steel-cut oats instead of rolled oats. In Kath’s Breakfast Bread, I felt that while the oat flavor was definitely there, it didn’t have much oaty texture. I didn’t realize that the rolled oats would pretty much turn into oatMEAL as the bread ripened and then baked. The steel-cut held their shape and added a little extra texture, but certain preliminary steps much be taken: The recipe calls for 100g (.5C) of dried steel-cut oats. But you wouldn’t want to add this directly to the mixer because they would never hydrate enough and you’d be left with teeth-crackingly crunchy bread. So what I did was soak the oats overnight at the same time as the pre-ferment (in about 2C of water). Then when you’re about to mix everything the next day, drain off the water from the oats, but don’t throw it out! It will be murky with oat starches and nutrients, so we should use it to bake the bread! I was able to get all 225g of water required for the final dough from the drained steel-cut.

2) The 70g of sunflower seeds are seeds that we bought raw, already out of the shell. No salt, no roasting. In fact, I toasted the sunflower seeds before adding them to the mix. Since they’re high in oil, I thought this might release some tasty flavors. Your preference, though. 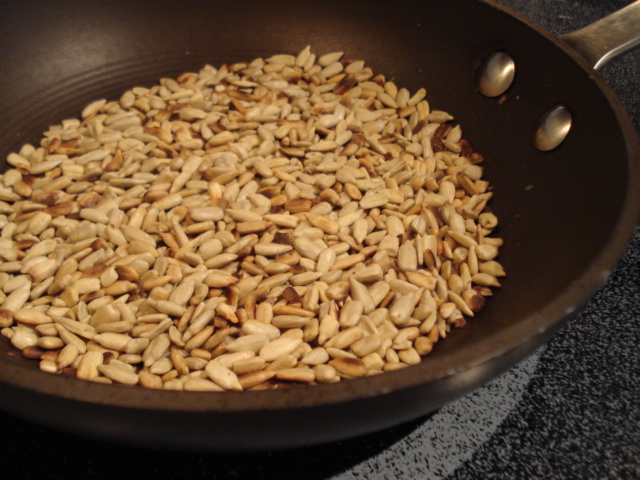 3) The bread was a little saltier than I prefer, which is strange because I used the same amount of salt as in the Breakfast Bread. There are slightly less water-absorbing ingredients in this recipe, though, but I didn’t think it would be enough to make a difference (maybe it was the honey too?). The recipe below has been adjusted and is what I recommend, salt-wise.

Now on with it! 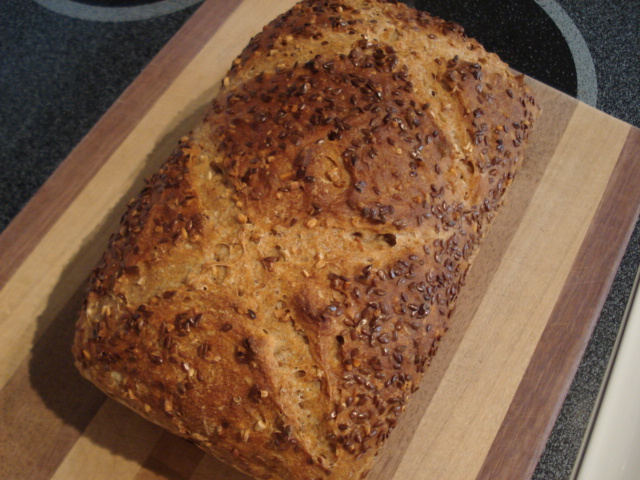 Because of the sunflower seeds, the dough will feel fragile, and I recommend some extra folding by hand before beginning fermentation. This will develop gluten some more, but it will partially avoid the seeds ripping holes in the dough. You will need a fairly floured surface and hands to get hold of this dough because it will be a little sticky.

After a few minutes of folding, cover with plastic and begin fermentation in a warm area for 2 hours. Fold after 1 hour has passed.

After fermentation, shape dough into a compact ball and allow to rest for 10-20 minutes.

Shape dough ball into an oval loaf and place into a 9×5 loaf pan that has been lightly dusted with flour. Allow to rise for 1.5 hours, preheating oven to 450* at the 1 hour mark. In the case of this bread, I went for a flaxseed topping, mostly for aesthetics. I thought it would look nice when the slashes separated. It was probably 2T of seeds if you want to try it. I brushed a little egg whites on top in hopes of making the seeds stick, which worked a little but it still makes a mess every time you slice a piece.

Anyways, slash the loaf somehow before baking and put in the oven. Splash 1oz of water on the oven floor for steam, and then bake for 28-33 minutes, until dark brown in color. 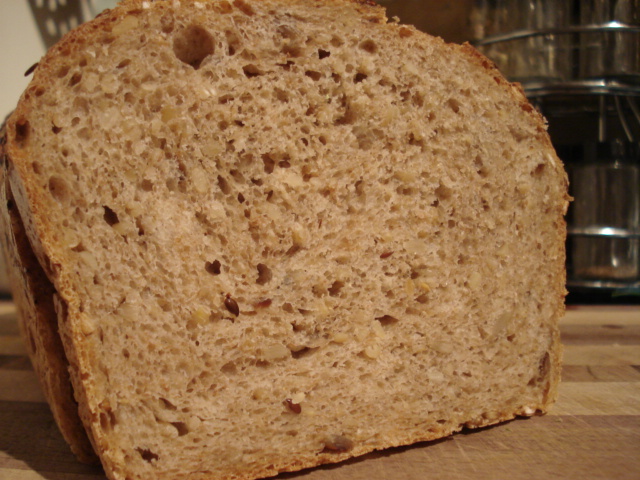